In classical geometry, a radius of a circle or sphere is any of the line segments from its center to its perimeter, and in more modern usage, it is also their length. The name comes from the Latin ''radius'', meaning ray but also the spoke of a chariot wheel. The plural of radius can be either ''radii'' (from the Latin plural) or the conventional English plural ''radiuses''. The typical abbreviation and mathematical variable name for radius is r. By extension, the diameter d is defined as twice the radius: : If an object does not have a center, the term may refer to its circumradius, the radius of its circumscribed circle or circumscribed sphere. In either case, the radius may be more than half the diameter, which is usually defined as the maximum distance between any two points of the figure. The inradius of a geometric figure is usually the radius of the largest circle or sphere contained in it. The inner radius of a ring, tube or other hollow object is the radius of its cavity. For regular polygons, the radius is the same as its circumradius. The inradius of a regular polygon is also called apothem. In graph theory, the radius of a graph is the minimum over all vertices ''u'' of the maximum distance from ''u'' to any other vertex of the graph. The radius of the circle with perimeter (circumference) ''C'' is :

For many geometric figures, the radius has a well-defined relationship with other measures of the figure.

The radius of a circle with area is : The radius of the circle that passes through the three non-collinear points , , and is given by : where is the angle . This formula uses the law of sines. If the three points are given by their coordinates , , and , the radius can be expressed as : 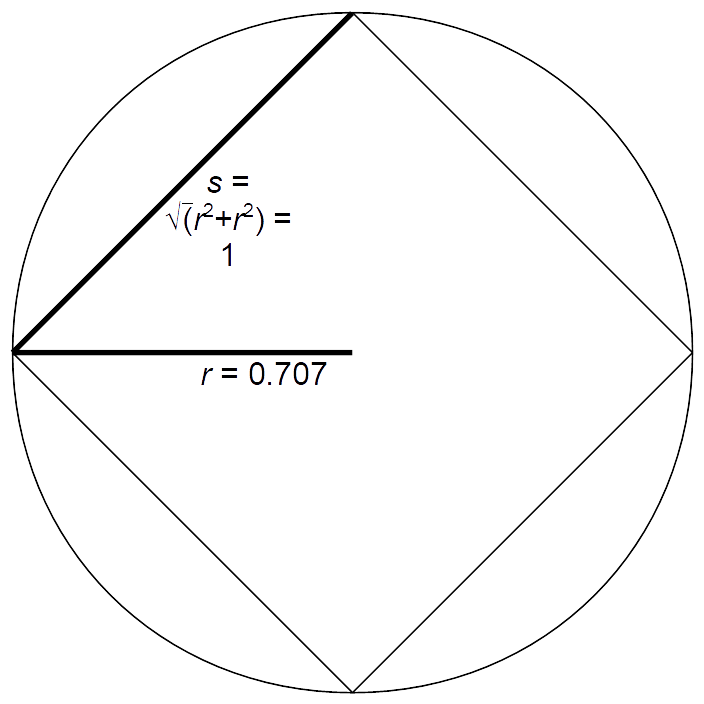 The radius of a regular polygon with sides of length is given by , where Values of for small values of are given in the table. If then these values are also the radii of the corresponding regular polygons.


Use in coordinate systems

The polar coordinate system is a two-dimensional coordinate system in which each point on a plane is determined by a distance from a fixed point and an angle from a fixed direction. The fixed point (analogous to the origin of a Cartesian system) is called the ''pole'', and the ray from the pole in the fixed direction is the ''polar axis''. The distance from the pole is called the ''radial coordinate'' or ''radius'', and the angle is the ''angular coordinate'', ''polar angle'', or ''azimuth''.

In a spherical coordinate system, the radius describes the distance of a point from a fixed origin. Its position if further defined by the polar angle measured between the radial direction and a fixed zenith direction, and the azimuth angle, the angle between the orthogonal projection of the radial direction on a reference plane that passes through the origin and is orthogonal to the zenith, and a fixed reference direction in that plane.