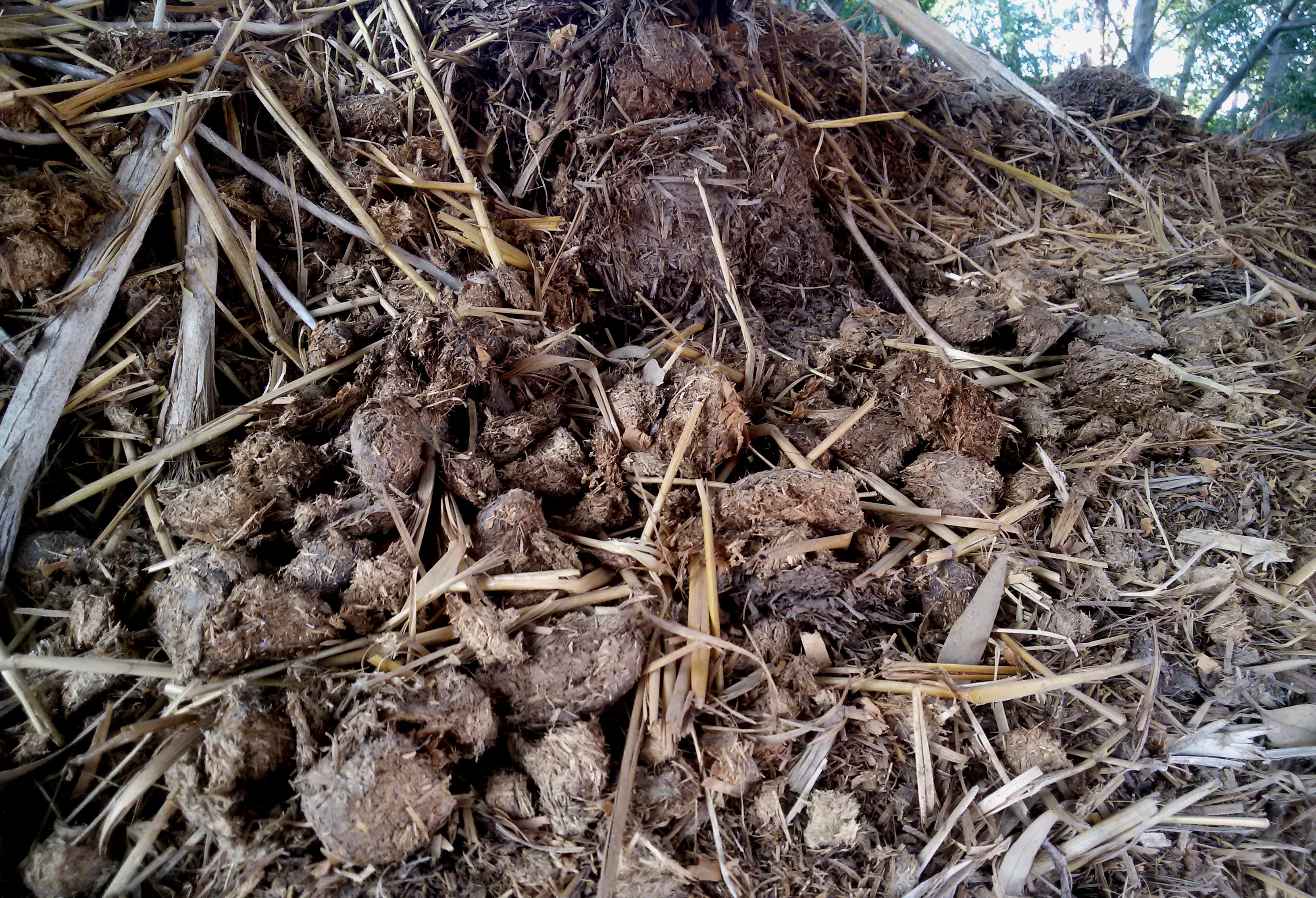 In biology, detritus () is dead particulate organic material, as distinguished from dissolved organic material. Detritus typically includes the bodies or fragments of bodies of dead organisms, and fecal material. Detritus typically hosts communities of microorganisms that colonize and decompose (i.e. remineralize) it. In terrestrial ecosystems it is present as leaf litter and other organic matter that is intermixed with soil, which is denominated "soil organic matter". The detritus of aquatic ecosystems is organic material that is suspended in the water and accumulates in depositions on the floor of the body of water; when this floor is a seabed, such a deposition is denominated "marine snow". 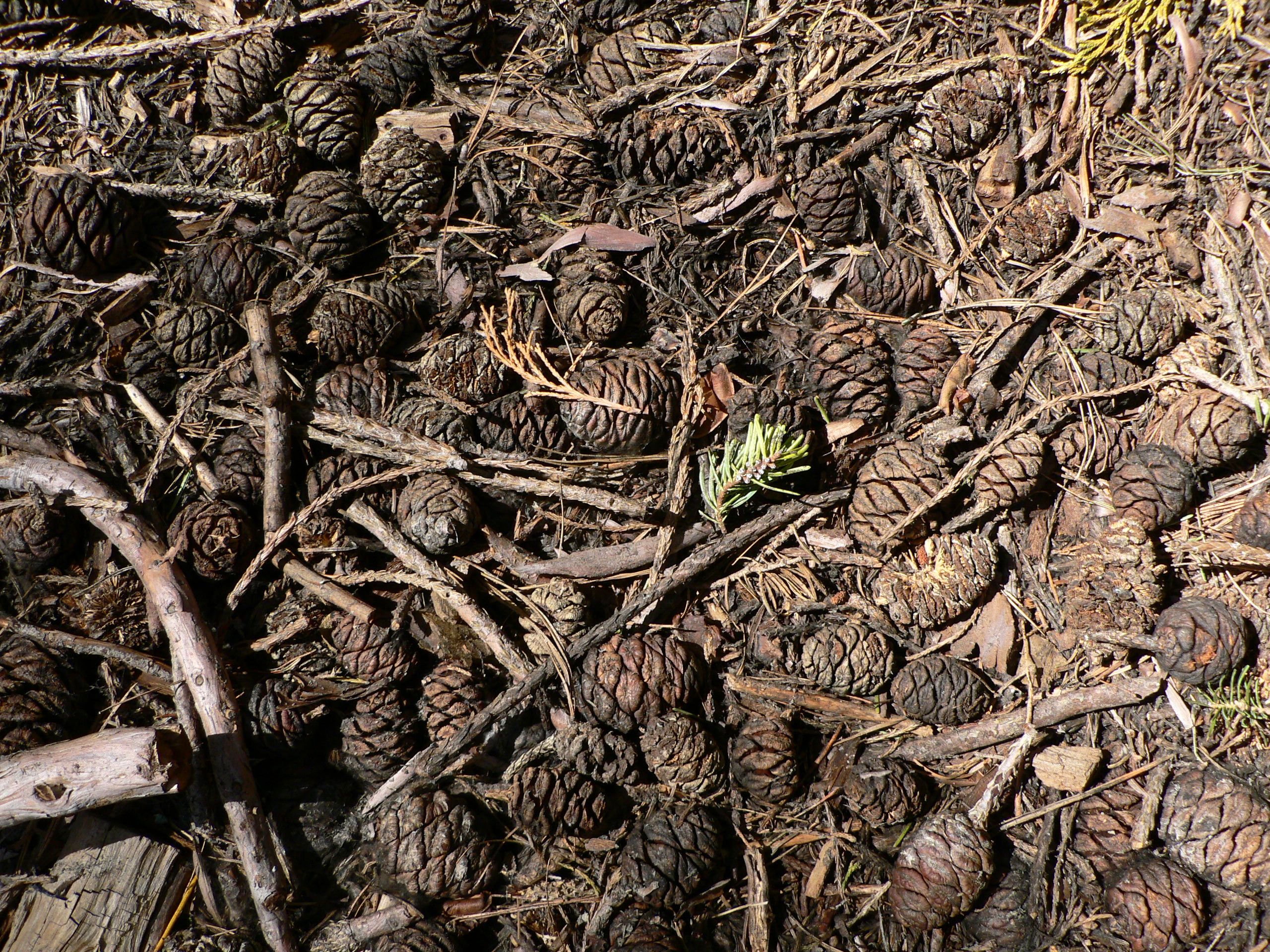 The corpses of dead plants or animals, material derived from animal tissues (e.g. molted skin), and fecal matter gradually lose their form due to physical processes and the action of decomposers, including grazers, bacteria, and fungi. Decomposition, the process by which organic matter is decomposed, occurs in several phases. Micro- and macro-organisms that feed on it rapidly consume and absorb materials such as proteins, lipids, and sugars that are low in molecular weight, while other compounds such as complex carbohydrates are decomposed more slowly. The decomposing microorganisms degrade the organic materials so as to gain the resources they require for their survival and reproduction. Accordingly, simultaneous to microorganisms' decomposition of the materials of dead plants and animals is their assimilation of decomposed compounds to construct more of their biomass (i.e. to grow their own bodies). When microorganisms die, fine organic particles are produced, and if small animals that feed on microorganisms eat these particles they collect inside the intestines of the consumers, and change shape into large pellets of dung. As a result of this process, most of the materials of dead organisms disappear and are not visible and recognizable in any form, but are present in the form of a combination of fine organic particles and the organisms that used them as nutrients. This combination is detritus. In ecosystems on land, detritus is deposited on the surface of the ground, taking forms such as the humic soil beneath a layer of fallen leaves. In aquatic ecosystems, most detritus is suspended in water, and gradually settles. In particular, many different types of material are collected together by currents, and much material settles in slowly flowing areas. Much detritus is used as a source of nutrition for animals. In particular, many bottom feeding animals (benthos) living in mud flats feed in this way. In particular, since excreta are materials which other animals do not need, whatever energy value they might have, they are often unbalanced as a source of nutrients, and are not suitable as a source of nutrition on their own. However, there are many microorganisms which multiply in natural environments. These microorganisms do not simply absorb nutrients from these particles, but also shape their own bodies so that they can take the resources they lack from the area around them, and this allows them to make use of excreta as a source of nutrients. In practical terms, the most important constituents of detritus are complex carbohydrates, which are persistent (difficult to break down), and the microorganisms which multiply using these absorb carbon from the detritus, and materials such as nitrogen and phosphorus from the water in their environment to synthesise the components of their own cells. A characteristic type of food chain called the detritus cycle takes place involving detritus feeders (detritivores), detritus and the microorganisms that multiply on it. For example, mud flats are inhabited by many univalves which are detritus feeders. When these detritus feeders take in detritus with microorganisms multiplying on it, they mainly break down and absorb the microorganisms, which are rich in proteins, and excrete the detritus, which is mostly complex carbohydrates, having hardly broken it down at all. At first this dung is a poor source of nutrition, and so univalves pay no attention to it, but after several days, microorganisms begin to multiply on it again, its nutritional balance improves, and so they eat it again. Through this process of eating the detritus many times over and harvesting the microorganisms from it, the detritus thins out, becomes fractured and becomes easier for the microorganisms to use, and so the complex carbohydrates are also steadily broken down and disappear over time. What is left behind by the detritivores is then further broken down and recycled by decomposers, such as bacteria and fungi. This detritus cycle plays a large part in the so-called purification process, whereby organic materials carried in by rivers is broken down and disappears, and an extremely important part in the breeding and growth of marine resources. In ecosystems on land, far more essential material is broken down as dead material passing through the detritus chain than is broken down by being eaten by animals in a living state. In both land and aquatic ecosystems, the role played by detritus is too large to ignore.

In contrast to land ecosystems, dead materials and excreta in aquatic ecosystems are typically transported by water flow; finer particles tend to be transported farther or suspended longer. In freshwater bodies organic material from plants can form a silt known as ''mulm'' or humus on the bottom. This material, some called ''undissolved organic carbon'' breaks down into dissolved organic carbon and can bond to heavy metal ions via chelation. It can also break down into colored dissolved organic matter such as tannin, a specific form of tannic acid. In saltwater bodies, organic material breaks down and forms a marine snow that slowly settles down to the ocean bottom.

Detritus occurs in a variety of terrestrial habitats including forest, chaparral and grassland. In forests the detritus is typically dominated by leaf, twig, and bacteria litter as measured by biomass dominance. This plant litter provides important cover for seedling protection as well as cover for a variety of arthropods, reptiles and amphibians. Some insect larvae feed on the detritus. Fungi and bacteria continue the decomposition process after grazers have consumed larger elements of the organic materials, and animal trampling has assisted in mechanically breaking down organic matter. At the later stages of decomposition, mesophilic micro-organisms decompose residual detritus, generating heat from exothermic processes; such heat generation is associated with the well known phenomenon of the elevated temperature of composting.

There is an extremely large number of detritus feeders in water. After all, a large quantity of material is carried in by water currents. Even if an organism stays in a fixed position, as long as it has a system for filtering water, it will be able to obtain enough food to get by. Many rooted organisms survive in this way, using developed gills or tentacles to filter the water to take in food, a process known as filter feeding. Another more widely used method of feeding, which also incorporates filter feeding, is a system where an organism secretes mucus to catch the detritus in lumps, and then carries these to its mouth using an area of cilia. This is called mucus feeding. Many organisms, including sea slugs and serpent's starfish, scoop up the detritus which has settled on the water bed. Bivalves which live inside the water bed do not simply suck in water through their tubes, but also extend them to fish for detritus on the surface of the bed.

In contrast, from the point of view of organisms using photosynthesis such as plants and plankton, detritus reduces the transparency of the water and gets in the way of this process. Given that these organisms also require a supply of nutrient salts—in other words fertilizer—for photosynthesis, their relationship with detritus is a complex one. In land ecosystems, the waste products of plants and animals collect mainly on the ground (or on the surfaces of trees), and as decomposition proceeds, plants are supplied with fertiliser in the form of inorganic salts. In water ecosystems, relatively little waste collects on the water bed, and so the progress of decomposition in water takes a more important role. Investigating the level of inorganic salts in sea ecosystems shows that unless there is an especially large supply, the quantity increases from winter to spring—but is normally extremely low in summer. As such, the quantity of seaweed present reaches a peak in early summer and then decreases. The thinking is that organisms like plants grow quickly in warm periods and thus the quantity of inorganic salts is not enough to keep up with the demand. In other words, during winter, plant-like organisms are inactive and collect fertiliser, but if the temperature rises to some extent they will use this up in a very short period. It is not entirely true that their productivity falls during the warmest periods. Organisms such as dinoflagellate have mobility, the ability to take in solid food, and the ability to photosynthesise. This type of micro-organism can take in substances such as detritus to grow, without waiting for it to be broken down into fertiliser.

In recent years, the word detritus has also come to be used in relation to aquariums (the word "aquarium" is a general term for any installation for keeping aquatic animals). When animals such as fish are kept in an aquarium, substances such as excreta, mucus and dead skin cast off during moulting are produced by the animals and, naturally, generate detritus, and are continually broken down by micro-organisms. Modern sealife aquariums often use the Berlin Method, which employs a piece of equipment called a protein skimmer, which produces air bubbles which the detritus adheres to, and forces it outside the tank before it decomposes, and also a highly porous type of natural rock called live rock where many bentos and bacteria live (hermatype which has been dead for some time is often used), which causes the detritus-feeding bentos and micro-organisms to undergo a detritus cycle. The Monaco system, where an anaerobic layer is created in the tank, to denitrify the organic compounds in the tank, and also the other nitrogen compounds, so that the decomposition process continues until the stage where water, carbon dioxide and nitrogen are produced, has also been implemented. Initially, the filtration systems in water tanks often worked as the name suggests, using a physical filter to remove foreign substances in the water. Following this, the standard method for maintaining the water quality was to convert ammonium or nitrates in excreta, which have a high degree of neurotoxicity, but the combination of detritus feeders, detritus and micro-organisms has now brought aquarium technology to a still higher level.

* David Author Grimaldi and Michael S. Author (2005) ''Engelevolution of the insects'', Cambridge University Press * Some of this article was translated from the :ja:デトリタス|equivalent article in the Japanese-language Wikipedia, as it was on September 1, 2006. {{Modelling ecosystems Category:Aquatic ecology Category:Ecology terminology