Click Here for Items Related To - Geological history of Mars


The geological history of Mars follows the physical evolution of
Mars Mars is the fourth planet from the Sun and the second-smallest planet in the Solar System, being larger than only Mercury (planet), Mercury. In English, Mars carries the name of the Mars (mythology), Roman god of war and is often referred to ...

as substantiated by observations, indirect and direct measurements, and various inference techniques. Methods dating back to 17th century techniques developed by Nicholas Steno, including the so-called law of superposition and
stratigraphy through Jurassic The Jurassic ( ) is a Geological period, geologic period and System (stratigraphy), stratigraphic system that spanned from the end of the Triassic period million years ago (Year, Mya) to the beginning of the Cretaceous period ap ...
, used to estimate the geological histories of Earth and the Moon, are being actively applied to the data available from several Martian observational and measurement resources. These include the landers, orbiting platforms, Earth-based observations, and Martian meteorites. Observations of the surfaces of many
Solar System The Solar SystemCapitalization of the name varies. The International Astronomical Union, the authoritative body regarding astronomical nomenclature, specifies capitalizing the names of all individual astronomical objects but uses mixed "Solar ...

bodies reveal important clues about their evolution. For example, a lava flow that spreads out and fills a large impact crater is likely to be younger than the crater. On the other hand, a small crater on top of the same lava flow is likely to be younger than both the lava and the larger crater since it can be surmised to have been the product of a later, unobserved, geological event. This principle, called the law of superposition, along with other principles of
stratigraphy through Jurassic The Jurassic ( ) is a Geological period, geologic period and System (stratigraphy), stratigraphic system that spanned from the end of the Triassic period million years ago (Year, Mya) to the beginning of the Cretaceous period ap ...
first formulated by Nicholas Steno in the 17th century, allowed geologists of the 19th century to divide the history of the Earth into the familiar eras of
Paleozoic The Paleozoic (or Palaeozoic) Era ( ; from the Greek ''palaiós'' (), "old" and ''zōḗ'' (), "life", meaning "ancient life") is the earliest of three geologic eras of the Phanerozoic Eon. It is the longest of the Phanerozoic eras, lasting fr ...
,
Mesozoic The Mesozoic Era ( ) meaning "middle life" is the middle of the three geological eras of the Phanerozoic Eon. It lasted from about . It is also called the Age of Reptiles and the Age of Conifers. The Mesozoic was preceded by the Paleozoic T ...
, and
Cenozoic The Cenozoic Era ( ) meaning "new life" is the current and most recent of the three geological eras of the Phanerozoic Eon. The Cretaceous–Paleogene extinction event near Drumheller, Alberta, where erosion has exposed the K–Pg boundary ...
. The same methodology was later applied to the
Moon The Moon is Earth's only proper natural satellite. At one-quarter the diameter of Earth (comparable to the width of Australia Australia, officially the Commonwealth of Australia, is a Sovereign state, sovereign country comprising ...

and then to Mars. 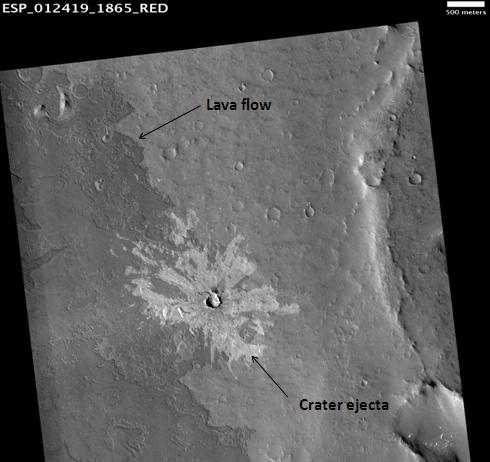 Another stratigraphic principle used on planets where impact craters are well preserved is that of crater number density. The number of craters greater than a given size per unit surface area (usually million km2) provides a relative age for that surface. Heavily cratered surfaces are old, and sparsely cratered surfaces are young. Old surfaces have many big craters, and young surfaces have mostly small craters or none at all. These stratigraphic concepts form the basis for the Martian geologic timescale.

Stratigraphy establishes the relative ages of layers of rock and sediment by denoting differences in composition (solids, liquids, and trapped gasses). Assumptions are often incorporated about the rate of deposition, which generates a range of potential age estimates across any set of observed sediment layers.

The primary technique for calibrating the ages to the Common Era calendar is radiometric dating. Combinations of different radioactive materials can improve the uncertainty in an age estimate based on any one isotope. By using stratigraphic principles, rock units' ages can usually only be determined relative to each other. For example, knowing that Mesozoic rock strata making up the
Cretaceous The Cretaceous (, ) is a geological period that lasted from about 145 to 66 million years ago (mya). It is the third and final period of the Mesozoic Era, as well as the longest. At nearly 80 million years, it is the longest geological period o ...
System A system is a group of Interaction, interacting or interrelated elements that act according to a set of rules to form a unified whole. A system, surrounded and influenced by its environment, is described by its boundaries, structure and purpose ...
lie on top of (and are therefore younger than) rocks of the
Jurassic The Jurassic ( ) is a Geological period, geologic period and System (stratigraphy), stratigraphic system that spanned from the end of the Triassic period million years ago (Year, Mya) to the beginning of the Cretaceous period approximately Mya. T ...
System reveals nothing about how long ago the Cretaceous or Jurassic Periods were. Other methods, such as
radiometric dating Radiometric dating, radioactive dating or radioisotope dating is a technique which is used to date materials such as rocks or carbon Carbon (from la, carbo "coal") is a chemical element Image:Simple Periodic Table Chart-blocks.svg, 40 ...
, are needed to determine absolute ages in geologic time. Generally, this is only known for rocks on the Earth. Absolute ages are also known for selected rock units of the Moon based on samples returned to Earth. Assigning absolute ages to rock units on Mars is much more problematic. Numerous attempts have been made over the years to determine an absolute Martian
chronology 222px, Joseph Scaliger's ''De emendatione temporum'' (1583) began the modern science of chronology Chronology (from Latin Latin (, or , ) is a classical language belonging to the Italic languages, Italic branch of the Indo-European language ...
(timeline) by comparing estimated impact cratering rates for Mars to those on the Moon. If the rate of impact crater formation on Mars by crater size per unit area over geologic time (the production rate or flux) is known with precision, then crater densities also provide a way to determine absolute ages. Unfortunately, practical difficulties in crater counting and uncertainties in estimating the flux still create huge uncertainties in the ages derived from these methods. Martian meteorites have provided datable samples that are consistent with ages calculated thus far, but the locations on Mars from where the meteorites came (provenance) are unknown, limiting their value as chronostratigraphic tools. Absolute ages determined by crater density should therefore be taken with some skepticism.

Studies of impact crater densities on the Martian surface have delineated four broad period (geology), periods in the planet's geological timescale, geologic history. The periods were named after places on Mars that have large-scale surface features, such as large craters or widespread lava flows, that date back to these time periods. The absolute ages given here are only approximate. From oldest to youngest, the time periods are: *Noachian, Pre-Noachian Represents the interval from the accretion and differentiation of the planet about 4.5 billion years ago (Gya) to the formation of the Hellas Planitia, Hellas impact basin, between 4.1 and 3.8 Gya. Most of the geologic record of this interval has been erased by subsequent erosion and high impact rates. The Martian dichotomy, crustal dichotomy is thought to have formed during this time, along with the Argyre Planitia, Argyre and Isidis Planitia, Isidis basins. *Noachian, Noachian Period (named after Noachis Terra): Formation of the oldest extant surfaces of Mars between 4.1 and about 3.7 billion years ago (Gya). Noachian-aged surfaces are scarred by many large impact craters. The Tharsis bulge is thought to have formed during the Noachian, along with extensive erosion by liquid water producing river Valley networks (Mars), valley networks. Large lakes or oceans may have been present. *Hesperian, Hesperian Period (named after Hesperia Planum): 3.7 to approximately 3.0 Gya. Marked by the formation of extensive lava plains. The formation of Olympus Mons probably began during this period. Catastrophic releases of water carved extensive outflow channels around Chryse Planitia and elsewhere. Ephemeral lakes or seas may have formed in the northern lowlands. *Amazonian (Mars), Amazonian Period (named after Amazonis Planitia): 3.0 Gya to present. Amazonian regions have few meteorite impact craters but are otherwise quite varied. Lava flows, glacial/periglacial activity, and minor releases of liquid water continued during this period. The date of the Hesperian/Amazonian boundary is particularly uncertain and could range anywhere from 3.0 to 1.5 Gya. Basically, the Hesperian is thought of as a transitional period between the end of heavy bombardment and the cold, dry Mars seen today.

In 2006, researchers using data from the OMEGA Visible and Infrared Mineralogical Mapping Spectrometer on board the Mars Express orbiter proposed an alternative Martian timescale based on the predominant type of mineral alteration that occurred on Mars due to different styles of chemical weathering in the planet's past. They proposed dividing the history of the Mars into three eras: the Phyllocian, Theiikian and Siderikan. *Phyllocian (named after :Phyllosilicates, phyllosilicate or clay minerals that characterize the era) lasted from the formation of the planet until around the Early Noachian (about 4.0 Gya). OMEGA identified outcropping of phyllosilicates at numerous locations on Mars, all in rocks that were exclusively Pre-Noachian or Noachian in age (most notably in rock exposures in Nili Fossae and Mawrth Vallis). Phyllosillicates require a water-rich, alkaline environment to form. The Phyllocian era correlates with the age of Valley networks (Mars), valley network formation on Mars, suggesting an early climate that was conducive to the presence of abundant surface water. It is thought that deposits from this era are the best candidates in which to search for evidence of past life on the planet. *Theiikian (named after sulphurous in Greek, for the :Sulfate minerals, sulphate minerals that were formed) lasted until about 3.5 Gya. It was an era of extensive volcanism, which released large amounts of sulfur dioxide, sulphur dioxide (SO2) into the atmosphere. The SO2 combined with water to create a sulphuric acid-rich environment that allowed the formation of hydrated sulphates (notably kieserite and gypsum). *Siderikan (named for iron in Greek, for the iron oxides that formed) lasted from 3.5 Gya until the present. With the decline of volcanism and available water, the most notable surface weathering process has been the slow oxidation of the iron-rich rocks by atmospheric peroxides producing the red iron oxides that give the planet its familiar colour.