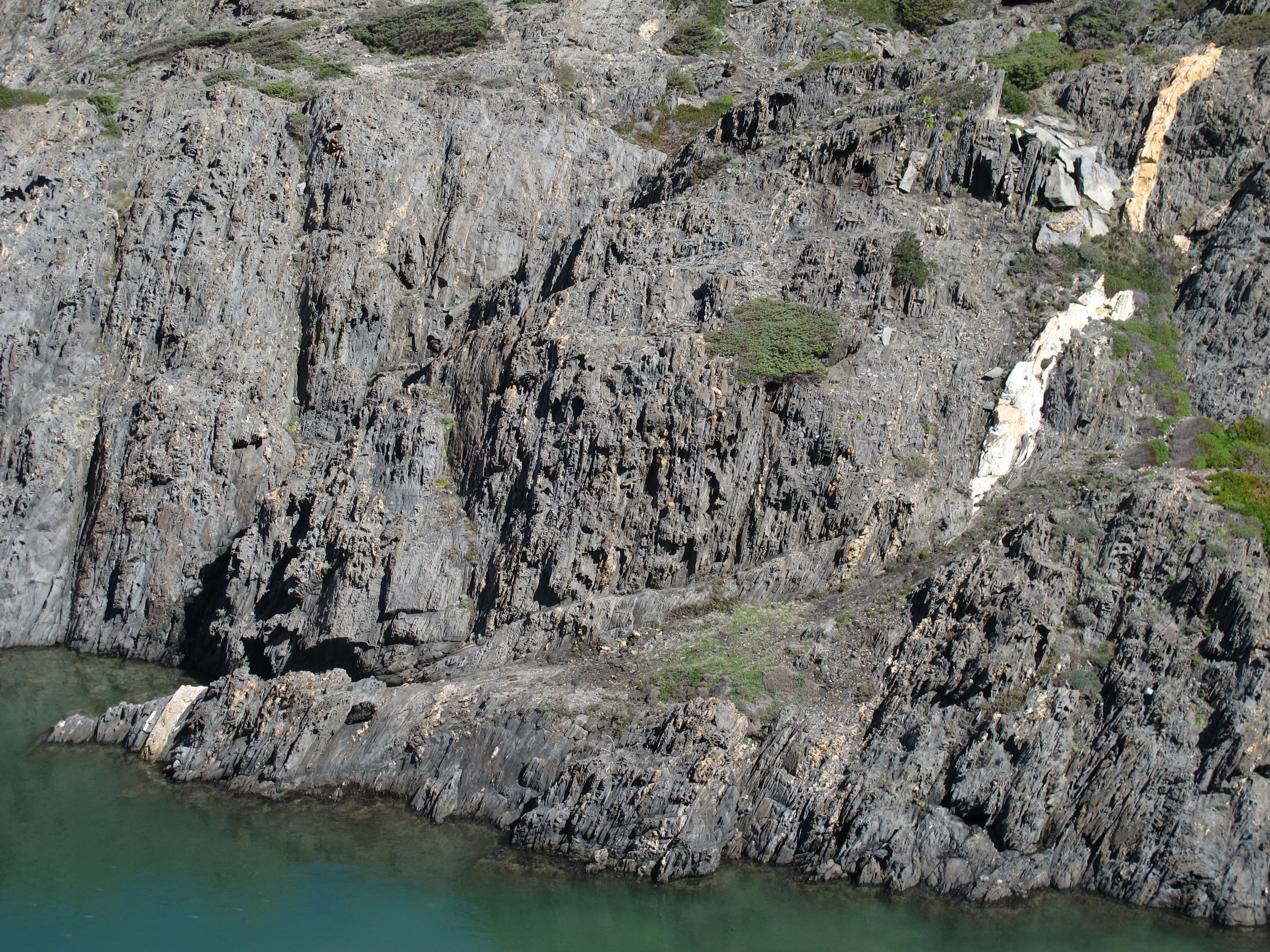 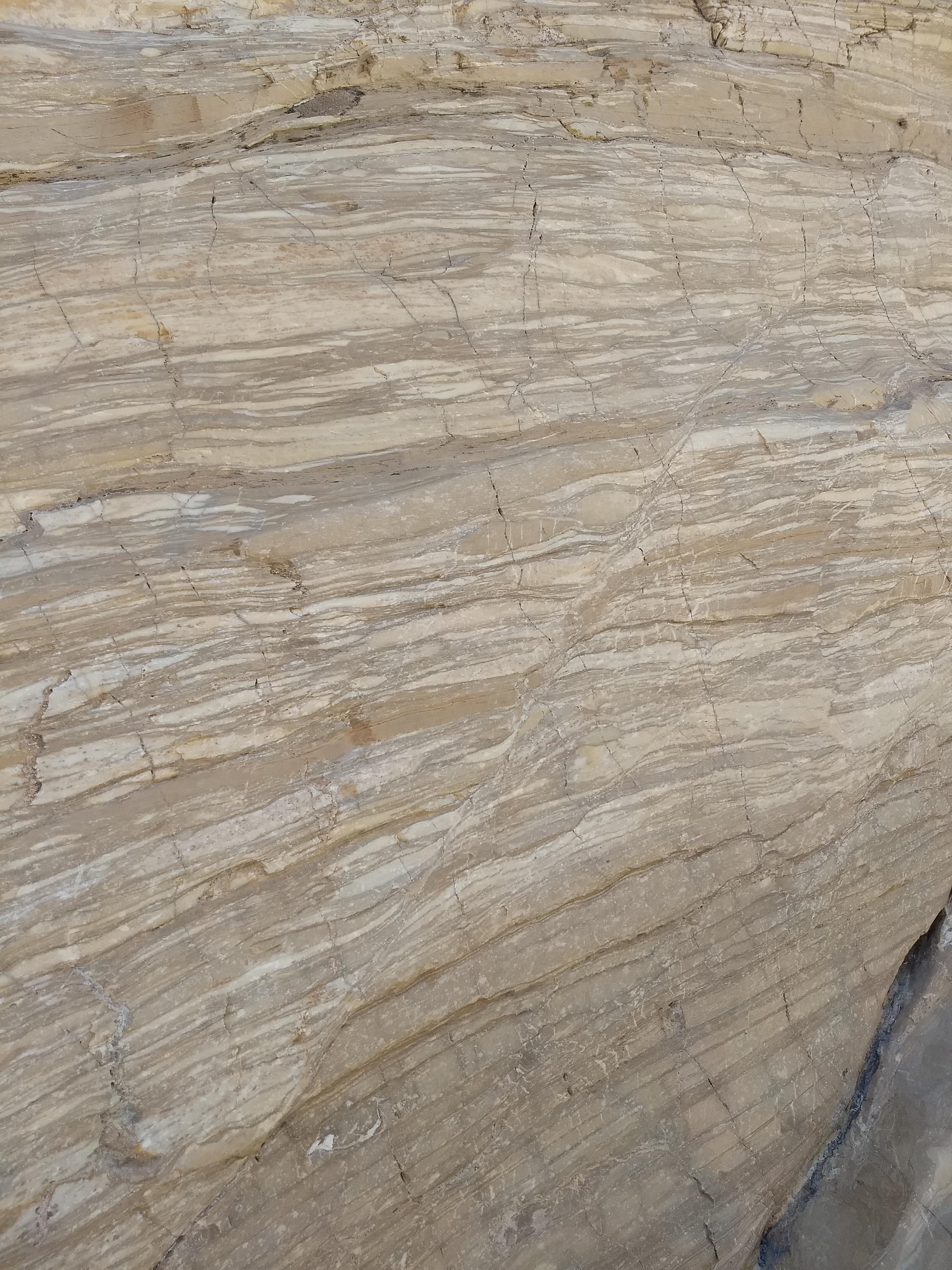 A shear zone is a very important structural discontinuity surface in the Earth's crust and upper mantle. It forms as a response to inhomogeneous deformation partitioning strain into planar or curviplanar high-strain zones. Intervening (crustal) blocks stay relatively unaffected by the deformation. Due to the shearing motion of the surrounding more rigid medium, a rotational, non co-axial component can be induced in the shear zone. Because the discontinuity surface usually passes through a wide depth-range, a great variety of different rock types with their characteristic structures are produced. 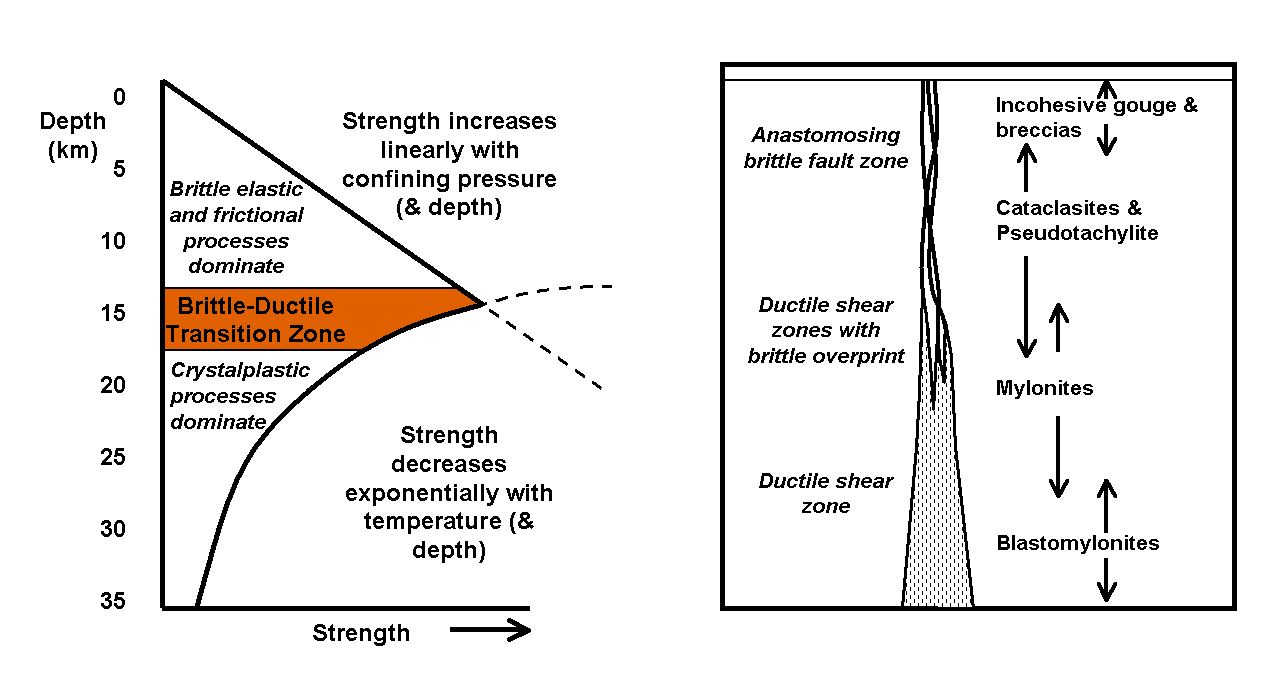 A shear zone is a zone of strong deformation (with a high strain rate) surrounded by rocks with a lower state of finite strain. It is characterised by a length to width ratio of more than 5:1. Shear zones form a continuum of geological structures, ranging from ''brittle shear zones'' (or faults) via ''brittle–ductile shear zones'' (or ''semibrittle shear zones''), ''ductile–brittle'' to ''ductile shear zones''. In brittle shear zones, the deformation is concentrated in a narrow fracture surface separating the wall rocks, whereas in a ductile shear zone the deformation is spread out through a wider zone, the deformation state varying continuously from wall to wall. Between these end-members, there are intermediate types of brittle–ductile (semibrittle) and ductile–brittle shear zones that can combine these geometric features in different proportions. This continuum found in the structural geometries of shear zones reflects the different deformation mechanisms reigning in the crust, i.e. the changeover from brittle (fracturing) at or near the surface to ductile (flow) deformation with increasing depth. By passing through the ''brittle–semibrittle transition'' the ductile response to deformation is starting to set in. This transition is not tied to a specific depth, but rather occurs over a certain depth range - the so-called alternating zone, where brittle fracturing and plastic flow coexist. The main reason for this is found in the usually heteromineral composition of rocks, with different minerals showing different responses to applied stresses (for instance, under stress quartz reacts plastically long before feldspars do). Thus differences in lithology, grain size, and preexisting fabrics determine a different rheological response. Yet other, purely physical factors, influence the changeover depth as well, including: * geothermal gradient, i.e. ambient temperature. * confinement pressure and fluid pressure. * bulk strain rate. * stress field orientation. In Scholz's model for a quartzo-feldspathic crust (with a geotherm taken from Southern California), the brittle–semibrittle transition starts at about 11 km depth with an ambient temperature of 300 °C. The underlying alternating zone then extends to roughly 16 km depth with a temperature of about 360 °C. Below approximately 16 km depth, only ductile shear zones are found. The ''seismogenic zone'', in which earthquakes nucleate, is tied to the brittle domain, the schizosphere. Below an intervening alternating zone, there is the plastosphere. In the seismogenic layer, which occurs below an ''upper stability transition'' related to an upper seismicity cutoff (situated usually at about 4–5 km depth), true cataclasites start to appear. The seismogenic layer then yields to the alternating zone at 11 km depth. Yet big earthquakes can rupture both up to the surface and well into the alternating zone, sometimes even into the plastosphere.

The deformations in shear zones are responsible for the development of characteristic fabrics and mineral assemblages reflecting the reigning pressure–temperature (pT) conditions, flow type, movement sense, and deformation history. Shear zones are therefore very important structures for unravelling the history of a specific terrane. Starting at the Earth's surface, the following rock types are usually encountered in a shear zone: * uncohesive fault rocks. Examples being fault gouge, fault breccia, and foliated gouge. * cohesive fault rocks like crush breccias and cataclasites (protocataclasite, cataclasite, and ultracataclasite). * glassy pseudotachylites. Both fault gouge and cataclasites are due to abrasive wear on brittle, seismogenic faults. * foliated mylonites (phyllonites). * striped gneiss. Mylonites start to occur with the onset of semibrittle behaviour in the alternating zone characterised by adhesive wear. Pseudotachylites can still be encountered here. By passing into greenschist facies conditions, the pseudotachylites disappear and only different types of mylonites persist. Striped gneisses are high-grade mylonites and occur at the very bottom of ductile shear zones.

The sense of shear in a shear zone (dextral, sinistral, reverse or normal) can be deduced by macroscopic structures and by a plethora of microtectonic indicators.

The width of individual shear zones stretches from the grain scale to the kilometer scale. Crustal-scale shear zones (megashears) can become 10 km wide and consequently show very large displacements from tens to hundreds of kilometers. Brittle shear zones (faults) usually widen with depth and with an increase in displacements.

Because shear zones are characterised by the localisation of strain, some form of ''strain softening'' must occur, in order for the affected host material to deform more plastically. The softening can be brought about by the following phenomena: * grain-size reductions. * geometric softening. * reaction softening. * fluid-related softening. Furthermore, for a material to become more ductile (quasi-plastic) and undergo continuous deformation (flow) without fracturing, the following deformation mechanisms (on a grain scale) have to be taken into account: * diffusion creep (various types). * dislocation creep (various types). * dynamic recrystallization * pressure solution processes. * grain-boundary sliding (superplasticity) and grain-boundary area reduction.


Occurrence and examples of shear zones

Due to their deep penetration, shear zones are found in all metamorphic facies. Brittle shear zones are more or less ubiquitous in the upper crust. Ductile shear zones start at greenschist facies conditions and are therefore restricted to metamorphic terranes. Shear zones can occur in the following geotectonic settings: * transcurrent setting – steep to vertical: ** strike-slip zones. ** transform faults. * compressive setting — low-angle **recumbent fold nappes (at the base of). **subduction zones. **thrust sheets (at the base of). * extensional setting — low-angle **metamorphic core complex detachments. Shear zones are dependent neither on rock type nor on geological age. Most often they are not isolated in their occurrence, but commonly form fractal-scaled, linked up, ''anastomosing networks'' which reflect in their arrangement the underlying dominant sense of movement of the terrane at that time. Some good examples of shear zones of the strike-slip type are the South Armorican Shear Zone and the North Armorican Shear Zone in Brittany, the North Anatolian Fault Zone in Turkey, and the Dead Sea Fault in Israel. Shear zones of the transform type are the San Andreas Fault in California, and the Alpine Fault in New Zealand. A shear zone of the thrust type is the Moine Thrust in northwestern Scotland. An example for the subduction zone setting is the Japan Median Tectonic Line. Detachment fault related shear zones can be found in southeastern California, e.g. the Whipple Mountain Detachment Fault. An example of a huge anastomosing shear-zone is the Borborema Shear Zone in Brazil.

The importance of shear zones lies in the fact that they are major zones of weakness in the Earth's crust, sometimes extending into the upper mantle. They can be very long-lived features and commonly show evidence of several overprinting stages of activity. Material can be transported upwards or downwards in them, the most important one being water circulating dissolved ions. This can bring about metasomatism in the host rocks and even re-fertilise mantle material. Shear zones can host economically viable mineralizations, examples being important gold deposits in Precambrian terranes.