Sedimentation is the tendency for particles in suspension to settle out of the fluid in which they are entrained and come to rest against a barrier. This is due to their motion through the fluid in response to the forces acting on them: these forces can be due to gravity, centrifugal acceleration, or electromagnetism. In geology, sedimentation is often described as the opposite of erosion, i.e., the terminal end of sediment transport. In that sense, it includes the termination of transport by saltation or true bedload transport. Settling is the falling of suspended particles through the liquid, whereas sedimentation is the termination of the settling process. In estuarine environments, settling can be influenced by the presence or absence of vegetation. Trees such as mangroves are crucial to the attenuation of waves or currents, promoting the settlement of suspended particles. Sedimentation may pertain to objects of various sizes, ranging from large rocks in flowing water, to suspensions of dust and pollen particles, to cellular suspensions, to solutions of single molecules such as proteins and peptides. Even small molecules supply a sufficiently strong force to produce significant sedimentation. The term is typically used in geology to describe the deposition of sediment which results in the formation of sedimentary rock, but it is also used in various chemical and environmental fields to describe the motion of often smaller particles and molecules. This process is also used in the biotech industry to separate cells from the culture media. 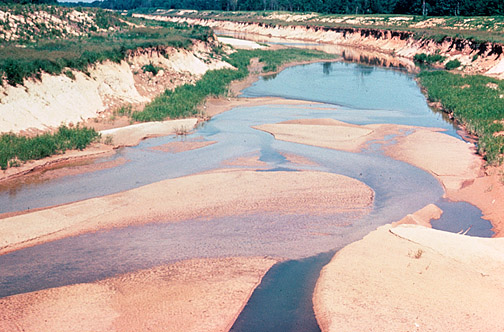 In geology, sedimentation is the deposition of particles carried by a fluid flow. For suspended load, this can be expressed mathematically by the Exner equation, and results in the formation of depositional landforms and the rocks that constitute sedimentary record. An undesired increased transport and sedimentation of suspended material is called siltation, and it is a major source of pollution in waterways in some parts of the world. High sedimentation rates can be a result of poor land management and a high frequency of flooding events. If not managed properly, it can be detrimental to fragile ecosystems on the receiving end, such as coral reefs. Climate change also affects siltation rates.

In chemistry, sedimentation has been used to measure the size of large molecules (macromolecule), where the force of gravity is augmented with centrifugal force in an ultracentrifuge.