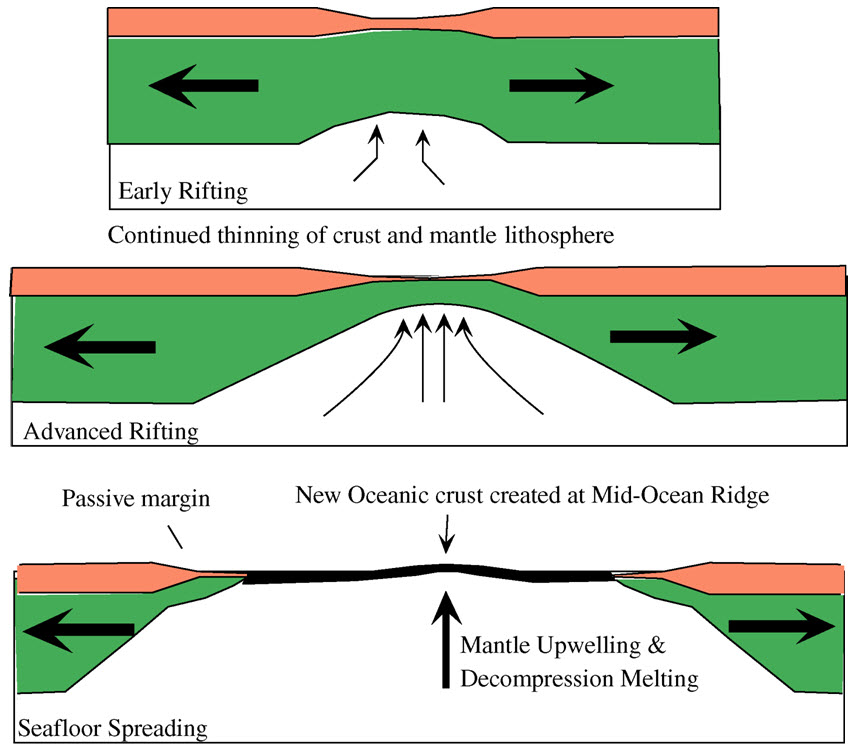 Passive margins are found at every ocean and continent boundary that is not marked by a strike-slip fault or a subduction zone. Passive margins define the region around the Atlantic Ocean, Arctic Ocean, and western Indian Ocean, and define the entire coasts of Africa, Greenland, India and Australia. They are also found on the east coast of North America and South America, in western Europe and most of Antarctica. East Asia also contains some passive margins.

The distinction between active and passive margins refers to whether a crustal boundary between oceanic lithosphere and continental lithosphere is a plate boundary. Active margins are found on the edge of a continent where subduction occurs. These are often marked by uplift and volcanic mountain belts on the continental plate. Less often there is a strike-slip fault, as defines the southern coastline of West Africa. Most of the eastern Indian Ocean and nearly all of the Pacific Ocean margin are examples of active margins. While a weld between oceanic and continental lithosphere is called a passive margin, it is not an inactive margin. Active subsidence, sedimentation, growth faulting, pore fluid formation and migration are all active processes on passive margins. Passive margins are only passive in that they are not active plate boundaries.

Passive margins are characterized by thick accumulations of sediments. Space for these sediments is called accommodation and is due to subsidence of especially the transitional crust. Subsidence is ultimately caused by gravitational equilibrium that is established between the crustal tracts, known as isostasy. Isostasy controls the uplift of the rift flank and the subsequent subsidence of the evolving passive margin and is mostly reflected by changes in heat flow. Heat flow at passive margins changes significantly over its lifespan, high at the beginning and decreasing with age. In the initial stage, the continental crust and lithosphere is stretched and thinned due to plate movement (plate tectonics) and associated igneous activity. The very thin lithosphere beneath the rift allows the upwelling mantle to melt by decompression. Lithospheric thinning also allows the asthenosphere to rise closer to the surface, heating the overlying lithosphere by conduction and advection of heat by intrusive dykes. Heating reduces the density of the lithosphere and elevates the lower crust and lithosphere. In addition, mantle plumes may heat the lithosphere and cause prodigious igneous activity. Once a mid-oceanic ridge forms and seafloor spreading begins, the original site of rifting is separated into conjugate passive margins (for example, the eastern US and NW African margins were parts of the same rift in early Mesozoic time and are now conjugate margins) and migrates away from the zone of mantle upwelling and heating and cooling begins. The mantle lithosphere below the thinned and faulted continental oceanic transition cools, thickens, increases in density and thus begins to subside. The accumulation of sediments above the subsiding transitional crust and lithosphere further depresses the transitional crust.

This is the typical way that passive margins form, as separated continental tracts move perpendicular to the coastline. This is how the Central Atlantic opened, beginning in Jurassic time. Faulting tends to be listric: normal faults that flatten with depth.

Sheared margins form where continental breakup was associated with strike-slip faulting. A good example of this type of margin is found on the south-facing coast of west Africa. Sheared margins are highly complex and tend to be rather narrow. They also differ from rifted passive margins in structural style and thermal evolution during continental breakup. As the seafloor spreading axis moves along the margin, thermal uplift produces a ridge. This ridge traps sediments, thus allowing for thick sequences to accumulate. These types of passive margins are less volcanic.

This type of passive margin develops where rifting is oblique to the coastline, as is now occurring in the Gulf of California.

Transitional crust, separating true oceanic and continental crusts, is the foundation of any passive margin. This forms during the rifting stage and consists of two endmembers: volcanic and non-volcanic. This classification scheme only applies to rifted and transtensional margin; transitional crust of sheared margins is very poorly known.

Volcanic margins form part of large igneous provinces, which are characterised by massive emplacements of mafic extrusives and intrusive rocks over very short time periods. Volcanic margins form when rifting is accompanied by significant mantle melting, with volcanism occurring before and/or during continental breakup. The transitional crust of volcanic margins is composed of basaltic igneous rocks, including lava flows, sills, dykes, and gabbro. Volcanic margins are usually distinguished from non-volcanic (or magma-poor) margins (e.g. the Iberian margin, Newfoundland margin) which do not contain large amounts of extrusive and/or intrusive rocks and may exhibit crustal features such as unroofed, serpentinized mantle. Volcanic margins are known to differ from magma-poor margins in a number of ways: * A transitional crust composed of basaltic igneous rocks, including lava flows, sills, dykes, and gabbros * A huge volume of basalt flows, typically expressed as seaward-dipping reflector sequences (SDRS) rotated during the early stages of crustal accretion (breakup stage) * The presence of numerous sill/dyke and vent complexes intruding into the adjacent basin * The lack of significant passive-margin subsidence during and after breakup * The presence of a lower crust with anomalously high seismic P-wave velocities (Vp=7.1-7.8 km/s) – referred to as lower crustal bodies (LCBs) in the geologic literature The high velocities (Vp > 7 km) and large thicknesses of the LCBs are evidence that supports the case for plume-fed accretion (mafic thickening) underplating the crust during continental breakup. LCBs are located along the continent-ocean transition but can sometimes extend beneath the continental part of the rifted margin (as observed in the mid-Norwegian margin for example). In the continental domain, there are still open discussion on their real nature, chronology, geodynamic and petroleum implications.