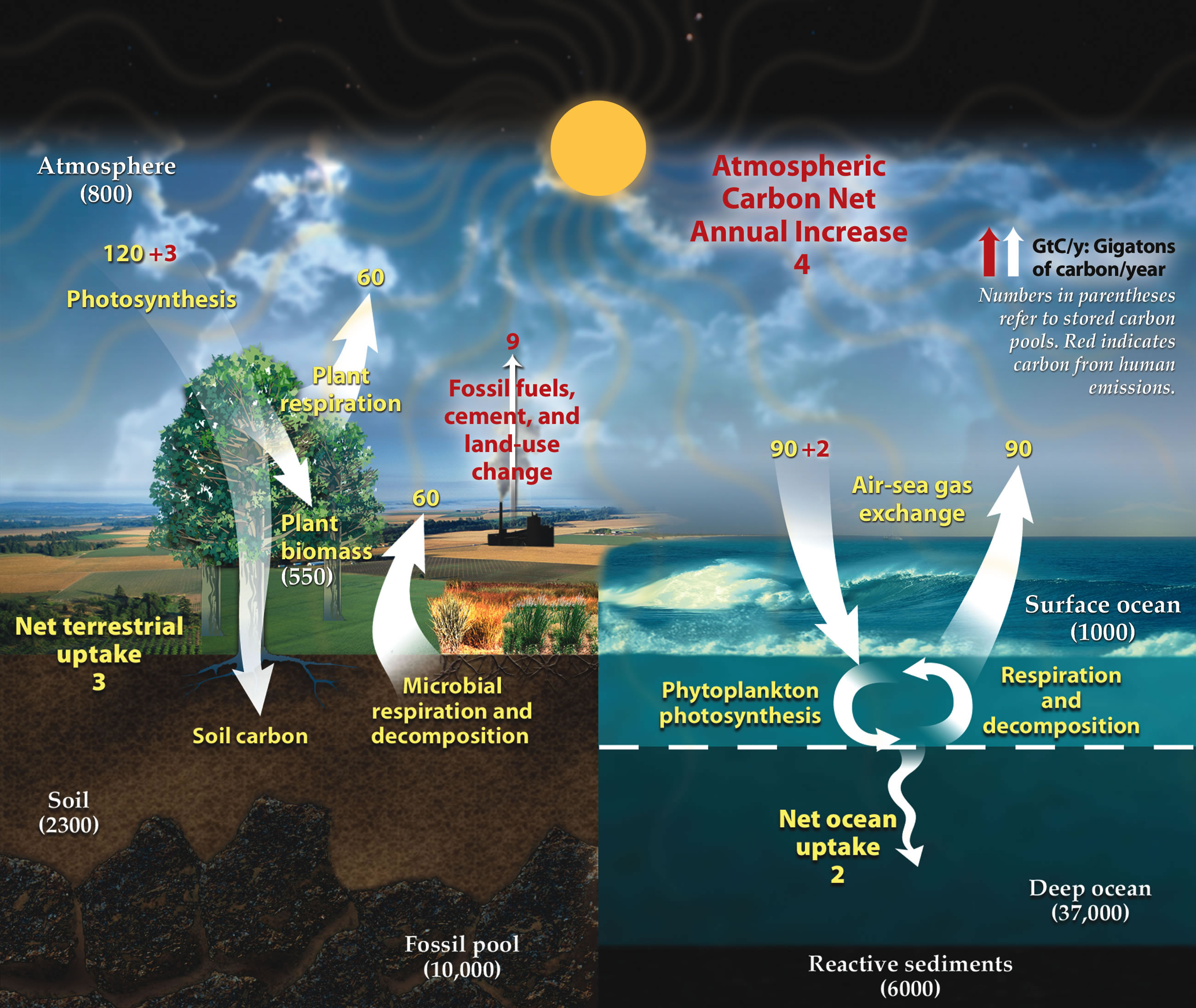 ) that begins with the conversion of
carbon dioxide Carbon dioxide (chemical formula ) is a colorless gas with a density about 53% higher than that of dry air. Carbon dioxide molecules consist of a carbon atom covalent bond, covalently double bonded to two oxygen atoms. It occurs naturally in At ...

and a hydrogen source like water into simple sugars and other organic molecules by autotrophic organisms using light (
photosynthesis Photosynthesis is a process used by plants and other organisms to convert light energy into chemical energy that, through cellular respiration, can later be released to fuel the organism's metabolic activities. This chemical energy is stored ...

) or other sources of energy. Most synthetically produced organic compounds are ultimately derived from
petrochemicals Petrochemicals (sometimes abbreviated as petchems) are the chemical products obtained from petroleum Petroleum (), also known as crude oil and oil, is a #Latent heat of vaporization, naturally occurring, yellowish-black liquid found in geolo ...
consisting mainly of Hydrocarbon, hydrocarbons, which are themselves formed from the high pressure and temperature degradation of organic matter underground over geological timescales. This ultimate derivation notwithstanding, organic compounds are no longer defined as compounds originating in living things, as they were historically. In chemical nomenclature, an organyl group, frequently represented by the letter R, refers to any monovalent substituent whose open valence is on a carbon atom.

Definitions of organic vs inorganic

For historical reasons discussed below, a few types of carbon-containing compounds, such as carbides, carbonates (excluding carbonate esters), simple oxides of carbon (for example, CO and CO2), and cyanides are considered Inorganic compound, inorganic. Different forms (allotropes) of pure carbon, such as diamond, graphite, Fullerene, fullerenes, and Carbon nanotube, carbon nanotubes are also excluded because they are simple substances composed of only a single element and therefore are not generally considered to be chemical ''compounds''.

Vitalism was a widespread conception that substances found in organic nature are created from the chemical elements by the action of a "vital force" or "life-force" (''vis vitalis'') that only living organisms possess. Vitalism taught that these "organic" compounds were fundamentally different from the "inorganic" compounds that could be obtained from the elements by chemical manipulations. Vitalism survived for a while even after the rise of modern ideas about the atomic theory and chemical elements. It first came under question in 1824, when Friedrich Wöhler synthesized oxalic acid, a compound known to occur only in living organisms, from cyanogen. A further experiment was Wöhler synthesis, Wöhler's 1828 synthesis of urea from the inorganic salt (chemistry), salts potassium cyanate and ammonium sulfate. Urea had long been considered an "organic" compound, as it was known to occur only in the urine of living organisms. Wöhler's experiments were followed by many others, in which increasingly complex "organic" substances were produced from "inorganic" ones without the involvement of any living organism.

Image:L-isoleucine-3D-balls.png, upright=0.8, The isoleucine, L-isoleucine molecule, C6H13NO2, showing features typical of organic compounds. Carbon atoms are in black, hydrogens gray, oxygens red, and nitrogen blue. Although vitalism has been discredited, scientific nomenclature retains the distinction between ''organic'' and ''inorganic'' compounds. The modern meaning of ''organic compound'' is any compound that contains a significant amount of carbon—even though many of the organic compounds known today have no connection to any substance found in living organisms. The term ''carbogenic'' has been proposed by E. J. Corey as a modern alternative to ''organic'', but this neologism remains relatively obscure. The organic compound isoleucine, L-isoleucine molecule presents some features typical of organic compounds: carbon–carbon bonds, carbon–hydrogen bonds, as well as covalent bonds from carbon to oxygen and to nitrogen. As described in detail below, any definition of organic compound that uses simple, broadly applicable criteria turns out to be unsatisfactory, to varying degrees. The modern, commonly accepted definition of organic compound essentially amounts to any carbon containing compound, excluding several classes of substances traditionally considered as 'inorganic'. However, the list of substances so excluded varies from author to author. Still, it is generally agreed upon that there are (at least) a few carbon containing compounds that should not be considered organic. For instance, almost all authorities would require the exclusion of alloys that contain carbon, including steel (which contains cementite, Fe3C), as well as other metal and semimetal carbides (including "ionic" carbides, e.g, Al4C3, Al4C3 and Calcium carbide, CaC2 and "covalent" carbides, e.g. Boron carbide, B4C and Silicon carbide, SiC, and graphite intercalation compounds, e.g. Graphite intercalation compound, KC8). Other compounds and materials that are considered 'inorganic' by most authorities include: metal carbonates, simple oxides (CO, CO2, and arguably, C3O2), the allotropes of carbon, cyanides, cyanide derivatives not containing an organic residue (e.g., KCN, (CN)2, BrCN, CNO−, etc.), and heavier analogs thereof (e.g., CP− 'cyaphide anion', CSe2, COS; although CS2 'carbon disulfide' is often classed as an ''organic'' solvent). Halides of carbon without hydrogen (e.g., CF4 and CClF3), phosgene (COCl2), carboranes, Metal carbonyl, metal carbonyls (e.g., nickel carbonyl), mellitic anhydride (C12O9), and other exotic oxocarbons are also considered inorganic by some authorities. Nickel tetracarbonyl, Nickel carbonyl (Ni(CO)4) and other metal carbonyls present an interesting case. They are often volatile liquids, like many organic compounds, yet they contain only carbon bonded to a transition metal and to oxygen and are often prepared directly from metal and carbon monoxide. Nickel carbonyl is frequently considered to be ''organometallic''. Although many organometallic chemists employ a broad definition, in which any compound containing a carbon-metal covalent bond is considered Organometallic chemistry, organometallic, it is debatable whether organometallic compounds form a subset of organic compounds. Metal complexes with organic ligands but no carbon-metal bonds (e.g., Cu(OAc)2) are not considered organometallic; instead they are classed as ''metalorganic''. Likewise, it is also unclear whether metalorganic compounds should automatically be considered organic. The relatively narrow definition of organic compounds as those containing C-H bonds excludes compounds that are (historically and practically) considered organic. Neither urea nor oxalic acid is organic by this definition, yet they were two key compounds in the vitalism debate. The Nomenclature of Organic Chemistry, IUPAC Blue Book on organic nomenclature specifically mentions urea and oxalic acid. Other compounds lacking C-H bonds but traditionally considered organic include benzenehexol, mesoxalic acid, and carbon tetrachloride. Mellitic acid, which contains no C-H bonds, is considered a possible organic substance in Mars, Martian soil. Terrestrially, it, and its anhydride, mellitic anhydride, are associated with the mineral mellite (Al2C6(COO)6·16H2O). A slightly broader definition of organic compound includes all compounds bearing C-H or C-C bonds. This would still exclude urea. Moreover, this definition still leads to somewhat arbitrary divisions in sets of carbon-halogen compounds. For example, tetrafluoromethane, CF4 and Carbon tetrachloride, CCl4 would be considered by this rule to be "inorganic", whereas fluoroform, CF3H, Chloroform, CHCl3, and Hexachloroethane, C2Cl6 would be organic, though these compounds share many physical and chemical properties.

Natural compounds refer to those that are produced by plants or animals. Many of these are still extracted from natural sources because they would be more expensive to produce artificially. Examples include most sugars, some alkaloids and terpenoids, certain nutrients such as vitamin B12, vitamin B12, and, in general, those natural products with large or stereoisomer, stereoisometrically complicated molecules present in reasonable concentrations in living organisms. Further compounds of prime importance in
biochemistry Biochemistry or biological chemistry, is the study of chemical processes within and relating to living organisms. A sub-discipline of both chemistry and biology, biochemistry may be divided into three fields: structural biology, enzymology and ...
are antigens, carbohydrates, enzymes, hormones, lipids and fatty acids, neurotransmitters, nucleic acids, proteins, peptides and amino acids, lectins, vitamins, and fats and oils.

Compounds that are prepared by reaction of other compounds are known as "synthetic". They may be either compounds that already are found in plants or animals or those that do not occur naturally. Most polymers (a category that includes all plastics and rubbers) are organic synthetic or semi-synthetic compounds.

Many organic compounds—two examples are ethanol and insulin—are manufactured industrially using organisms such as bacteria and yeast. Typically, the DNA of an organism is altered to express compounds not ordinarily produced by the organism. Many such biotechnology-engineered compounds did not previously exist in nature.

* The ''Chemical Abstracts Service, CAS'' database is the most comprehensive repository for data on organic compounds. The search tool ''Chemical Abstracts Service#SciFinder, SciFinder'' is offered. * The ''Beilstein database'' contains information on 9.8 million substances, covers the scientific literature from 1771 to the present, and is today accessible via Reaxys. Structures and a large diversity of physical and chemical properties is available for each substance, with reference to original literature. * ''PubChem'' contains 18.4 million entries on compounds and especially covers the field of medicinal chemistry. A great number of more specialized databases exist for diverse branches of organic chemistry.