300px|Only a few of the largest large igneous provinces appear (coloured dark purple) on this geological map, which depicts crustal geologic provinces as seen in seismic refraction data A large igneous province (LIP) is an extremely large accumulation of igneous rocks, including intrusive (sills, dikes) and extrusive (lava flows, tephra deposits), arising when magma travels through the crust towards the surface. The formation of LIPs is variously attributed to mantle plumes or to processes associated with divergent plate tectonics. The formation of some of the LIPs in the past 500 million years coincide in time with mass extinctions and rapid climatic changes, which has led to numerous hypotheses about causal relationships. LIPs are fundamentally different from any other currently active volcanoes or volcanic systems.

In 1992 researchers first used the term ''large igneous province'' to describe very large accumulations—areas greater than 100,000 square kilometers (approximately the area of Iceland)—of mafic igneous rocks that were erupted or emplaced at depth within an extremely short geological time interval: a few million years or less. Mafic, basalt sea floors and other geological products of 'normal' plate tectonics were not included in the definition.

The definition of ''LIP'' has been expanded and refined, and is still a work in progress. ''LIP'' is now frequently also used to describe voluminous areas of, not just mafic, but all types of igneous rocks. Sub-categorization of LIPs into ''large volcanic provinces'' (LVP) and ''large plutonic provinces'' (LPP), and including rocks produced by normal plate tectonic processes, have been proposed, but these modifications are not generally accepted. Some LIPs are geographically intact, such as the basaltic Deccan Traps in India, while others have been fragmented and separated by plate movements, like the Central Atlantic Magmatic Province (CAMP)—parts of which are found in Brazil, eastern North America, and north-western Africa.

Motivations for study of LIPs 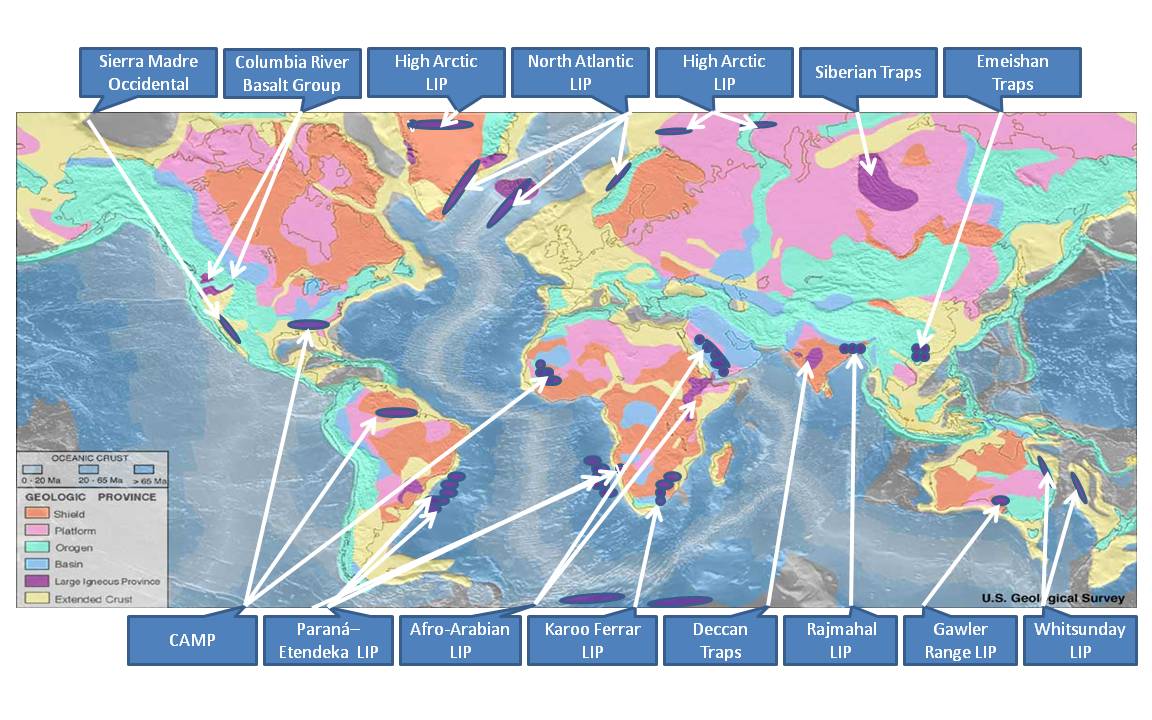 Large igneous provinces (LIPs) are created during short-lived igneous events resulting in relatively rapid and high-volume accumulations of volcanic and intrusive igneous rock. These events warrant study because: * The possible links to mass extinctions and global environmental and climatic changes. Michael Rampino and Richard Stothers (1988) cited eleven distinct flood-basalt episodes – occurring in the past 250 million years – which created volcanic provinces and oceanic plateaus and coincided with mass extinctions. This theme has developed into a broad field of research, bridging geoscience disciplines such as biostratigraphy, volcanology, metamorphic petrology, and Earth System Modelling. *The study of LIPs has economic implications. Some workers associate them with trapped hydrocarbons. They are associated with economic concentrations of copper–nickel and iron. They are also associated with formation of major mineral provinces including Platinum-Group Element (PGE) Deposits and, in the silicic LIPs, silver and gold deposits.