Isostasy (Greek ''ísos'' "equal", ''stásis'' "standstill") or isostatic equilibrium is the state of gravitational equilibrium between Earth's crust (or lithosphere) and mantle such that the crust "floats" at an elevation that depends on its thickness and density. This concept is invoked to explain how different topographic heights can exist at Earth's surface. Isostasy does not upset equilibrium but instead restores it (a negative feedback). It is generally accepted that Earth is a dynamic system that responds to loads in many different ways. However, isostasy provides an important 'view' of the processes that are happening in areas that are experiencing vertical movement. Certain areas (such as the Himalayas) are not in isostatic equilibrium, which has forced researchers to identify other reasons to explain their topographic heights. In the case of the Himalayas, which are still rising, it has been proposed that their elevation is being supported by the force of the impacting Indian Plate. The Basin and Range Province of the Western US is another example of a region not in isostatic equilibrium. Although originally defined in terms of continental crust and mantle, it has subsequently been interpreted in terms of lithosphere and asthenosphere, particularly with respect to oceanic island volcanoes, such as the Hawaiian Islands. In the simplest example, isostasy is the principle of buoyancy in which an object immersed in a fluid is buoyed with a force equal to the weight of the displaced fluid. On a geological scale, isostasy can be observed if Earth's strong crust or lithosphere exerts stress on the weaker mantle or asthenosphere, which over geological time flows laterally such that the load is accommodated by height adjustments. The general term 'isostasy' was coined in 1882 by the American geologist Clarence Dutton.

Three principal models of isostasy are used: # The Airy–Heiskanen model – where different topographic heights are accommodated by changes in crustal thickness, in which the crust has a constant density # The Pratt–Hayford model – where different topographic heights are accommodated by lateral changes in rock density. # The Vening Meinesz, or flexural isostasy model – where the lithosphere acts as an elastic plate and its inherent rigidity distributes local topographic loads over a broad region by bending. Airy and Pratt isostasy are statements of buoyancy, but flexural isostasy is a statement of buoyancy when deflecting a sheet of finite elastic strength. 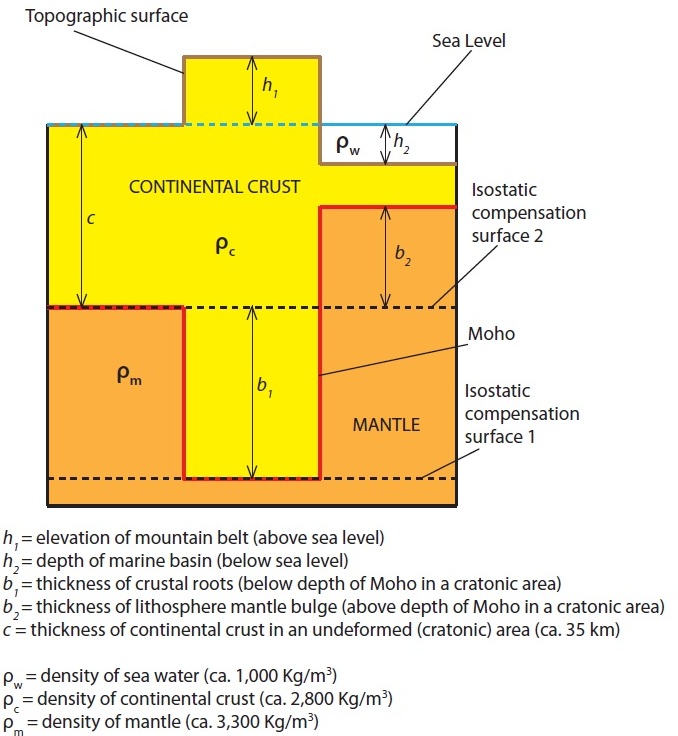 For the simplified model shown the new density is given by: , where is the height of the mountain and c the thickness of the crust.

This hypothesis was suggested to explain how large topographic loads such as seamounts (e.g. Hawaiian Islands) could be compensated by regional rather than local displacement of the lithosphere. This is the more general solution for lithospheric flexure, as it approaches the locally compensated models above as the load becomes much larger than a flexural wavelength or the flexural rigidity of the lithosphere approaches zero.

When large amounts of sediment are deposited on a particular region, the immense weight of the new sediment may cause the crust below to sink. Similarly, when large amounts of material are eroded away from a region, the land may rise to compensate. Therefore, as a mountain range is eroded, the (reduced) range rebounds upwards (to a certain extent) to be eroded further. Some of the rock strata now visible at the ground surface may have spent much of their history at great depths below the surface buried under other strata, to be eventually exposed as those other strata eroded away and the lower layers rebounded upwards. An analogy may be made with an iceberg, which always floats with a certain proportion of its mass below the surface of the water. If snow falls to the top of the iceberg, the iceberg will sink lower in the water. If a layer of ice melts off the top of the iceberg, the remaining iceberg will rise. Similarly, Earth's lithosphere "floats" in the asthenosphere.

When continents collide, the continental crust may thicken at their edges in the collision. If this happens, much of the thickened crust may move ''downwards'' rather than up as with the iceberg analogy. The idea of continental collisions building mountains "up" is therefore rather a simplification. Instead, the crust ''thickens'' and ''the upper part of the thickened crust'' may become a mountain range. However, some continental collisions are far more complex, and the region may not be in isostatic equilibrium, so this subject has to be treated with caution for better understanding .

Perfect isostatic equilibrium is possible only if mantle material is in rest. However, thermal convection is present in the mantle. In such a case only the more general hypothesis of deep dynamic isostasy (DDI) can be satisfied.

The formation of ice sheets can cause Earth's surface to sink. Conversely, isostatic post-glacial rebound is observed in areas once covered by ice sheets that have now melted, such as around the Baltic Sea and Hudson Bay. As the ice retreats, the load on the lithosphere and asthenosphere is reduced and they ''rebound'' back towards their equilibrium levels. In this way, it is possible to find former sea cliffs and associated wave-cut platforms hundreds of metres above present-day sea level. The rebound movements are so slow that the uplift caused by the ending of the last glacial period is still continuing. In addition to the vertical movement of the land and sea, isostatic adjustment of the Earth also involves horizontal movements. It can cause changes in Earth's gravitational field and rotation rate, polar wander, and earthquakes.

The hypothesis of isostasy is often used to determine the position of the lithosphere-asthenosphere boundary (LAB).

Eustasy is another cause of relative sea level change quite different from isostatic causes. The term ''eustasy'' or ''eustatic'' refers to changes in the volume of water in the oceans, usually due to global climate change. When Earth's climate cools, a greater proportion of water is stored on land masses in the form of glaciers, snow, etc. This results in falling global sea levels (relative to a stable land mass). The refilling of ocean basins by glacial meltwater at the end of ice ages is an example of eustatic sea level rise. A second significant cause of eustatic sea level rise is thermal expansion of sea water when Earth's mean temperature increases. Current estimates of global eustatic rise from tide gauge records and satellite altimetry is about +4 mm/a (see 2019 IPCC report). Global sea level is also affected by vertical crustal movements, changes in Earth's rotation rate, large-scale changes in continental margins and changes in the spreading rate of the ocean floor. When the term ''relative'' is used in context with ''sea level change'', the implication is that both eustasy and isostasy are at work, or that the author does not know which cause to invoke. Post-glacial rebound can also be a cause of rising sea levels. When the sea floor rises, which it continues to do in parts of the northern hemisphere, water is displaced and has to go elsewhere.