The Tetragrammaton () or Tetragram (from Greek , meaning "onsisting offour letters") is the four-letter Hebrew word (transliterated as YHWH), the name of the national god of Israel. The four letters, read from right to left, are ''yodh'', ''he'', ''waw'', and ''he''. While there is no consensus about the structure and etymology of the name, the form ''Yahweh'' is now accepted almost universally. The books of the Torah and the rest of the Hebrew Bible except Esther, Ecclesiastes, and (with a possible instance in verse 8:6) the Song of Songs contain this Hebrew name. Observant Jews and those who follow Talmudic Jewish traditions do not pronounce nor do they read aloud proposed transcription forms such as ''Yahweh'' or ''Yehovah''; instead they replace it with a different term, whether in addressing or referring to the God of Israel. Common substitutions in Hebrew are Adonai ("My Lord") or Elohim (literally "gods" but treated as singular when meaning "God") in prayer, or ''HaShem'' ("The Name") in everyday speech.

The letters, properly read from right to left (in Biblical Hebrew), are: Modern scholars generally agree that YHWH is derived from the Hebrew triconsonantal root (h-y-h), "to be, become, come to pass", an archaic form of which is (h-w-h), with a third-person masculine y- prefix, equivalent to English "he". They connect it to Exodus 3:14, where the divinity who spoke with Moses responds to a question about his name by declaring: (''Ehyeh asher ehyeh''), "I am that I am" or "I will be what I will be" (in Biblical Hebrew, the form of the verb here is not associated with any particular English tense). 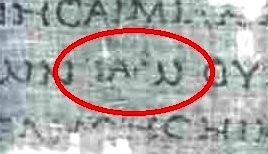 Like all letters in the Hebrew script, the letters in YHWH originally indicated consonants. In unpointed Biblical Hebrew, most vowels are not written, but some are indicated ambiguously, as certain letters came to have a secondary function indicating vowels (similar to the Latin use of I and V to indicate either the consonants /j, w/ or the vowels /i, u/). Hebrew letters used to indicate vowels are known as ''matres lectionis'' ("mothers of reading"). Therefore it can be difficult to deduce how a word is pronounced from its spelling, and each of the four letters in the Tetragrammaton can individually serve as a ''mater lectionis''. The original consonantal text of the Hebrew Bible was, several centuries later, provided with vowel marks by the Masoretes to assist reading. In places where the word to be read (the ''qere'') differed from that indicated by the consonants of the written text (the ''ketiv''), they wrote the ''qere'' in the margin as a note showing what was to be read. In such a case the vowel marks of the ''qere'' were written on the ''ketiv''. For a few frequent words, the marginal note was omitted: these are called qere perpetuum. One of the frequent cases was the Tetragrammaton, which according to later Rabbinite Jewish practices should not be pronounced but read as "Adonai" (/"my Lord"), or, if the previous or next word already was Adonai, as "Elohim" (/"God"). Writing the vowel diacritics of these two words on the consonants YHVH produces and respectively, non-words that would spell "Yehovah" and "Yehovih" respectively. The oldest complete or nearly complete manuscripts of the Masoretic Text with Tiberian vocalisation, such as the ''Aleppo Codex'' and the ''Leningrad Codex'', both of the 10th or 11th century, mostly write (''yhwah''), with no pointing on the first ''h''. It could be because the ''o'' diacritic point plays no useful role in distinguishing between ''Adonai'' and ''Elohim'' and so is redundant, or it could point to the ''qere'' being (''šəmâ''), which is Aramaic for "the Name".

The adoption at the time of the Protestant Reformation of "Jehovah" in place of the traditional "Lord" in some new translations, vernacular or Latin, of the biblical Tetragrammaton stirred up dispute about its correctness. In 1711, Adriaan Reland published a book containing the text of 17th-century writings, five attacking and five defending it. As critical of the use of "Jehovah" it incorporated writings by Johannes van den Driesche (1550–1616), known as Drusius; Sixtinus Amama (1593–1629); Louis Cappel (1585–1658); Johannes Buxtorf (1564–1629); Jacob Alting (1618–1679). Defending "Jehovah" were writings by Nicholas Fuller (1557–1626) and Thomas Gataker (1574–1654) and three essays by Johann Leusden (1624–1699). The opponents of "Jehovah" said that the Tetragrammaton should be pronounced as "Adonai" and in general do not speculate on what may have been the original pronunciation, although mention is made of the fact that some held that ''Jahve'' was that pronunciation. Almost two centuries after the 17th-century works reprinted by Reland, 19th-century Wilhelm Gesenius reported in his ''Thesaurus Philologicus'' on the main reasoning of those who argued either for /''Yahwoh'' or /''Yahweh'' as the original pronunciation of the Tetragrammaton, as opposed to /''Yehovah'', citing explicitly as supporters of the 17th-century writers mentioned by Reland and implicitly Johann David Michaelis (1717–1791) and Johann Friedrich von Meyer (1772–1849), the latter of whom Johann Heinrich Kurtz described as the last of those "who have maintained with great pertinacity that was the correct and original pointing". Edward Robinson's translation of a work by Gesenius, gives the personal view of Gesenius as: "My own view coincides with that of those who regard this name as anciently pronounced Yahwehlike the Samaritans." Robert Alter states that, in spite of the uncertainties that exist, there is now strong scholarly consensus that the original pronunciation of the Tetragrammaton is ''Yahweh'' (): "The strong consensus of biblical scholarship is that the original pronunciation of the name YHWH ... was Yahweh." R. R. Reno agrees that, when in the late first millennium Jewish scholars inserted indications of vowels into the Hebrew Bible, they signalled that what was pronounced was "Adonai" (Lord); non-Jews later combined the vowels of Adonai with the consonants of the Tetragrammaton and invented the name "Jehovah", and "modern scholars have developed their own, more plausible speculations, and a consensus has emerged that vocalizes the divine name as "Yahweh" (YaHWeH). But at the end of the day, we really don't know, and in any event, the ancient imperative of spiritual modesty remains compelling. ..r many centuries Christians followed the Jewish tradition of vocalizing the divine name 'YHWH' as 'Adonai', which is Hebrew for 'Lord'. Newer translations try to restore the particularity of the name of God by spelling it out as Yahweh. There are good reasons to support the older approach. It has the advantage of spiritual and intellectual modesty." Paul Joüon and Takamitsu Muraoka state: "The Qre is ''the Lord'', whilst the Ktiv is probably ( (according to ancient witnesses)", and they add: "Note 1: In our translations, we have used ''Yahweh'', a form widely accepted by scholars, instead of the traditional ''Jehovah.''" Already in 1869, when, as shown by the use of the then traditional form "Jehovah" as title for its article on the question, the present strong consensus that the original pronunciation was "Yahweh" had not yet attained full force, ''Smith's Bible Dictionary'', a collaborative work of noted scholars of the time, declared: "Whatever, therefore, be the true pronunciation of the word, there can be little doubt that it is not ''Jehovah''." Mark P. Arnold remarks that certain conclusions drawn from the pronunciation of as "Yahweh" would be valid even if the scholarly consensus were not correct.

The oldest known inscription of the Tetragrammaton dates to 840 BCE: the Mesha Stele mentions the Israelite god ''Yahweh''. Of the same century are two pottery sherds found at Kuntillet Ajrud with inscriptions mentioning "Yahweh of Samaria and his Asherah" and "Yahweh of Teman and his Asherah". A tomb inscription at Khirbet el-Qom also mentions Yahweh. Dated slightly later (VII century BCE) there are an ostracon from the collections of Shlomo Moussaieff, and two tiny silver amulet scrolls found at Ketef Hinnom that mention Yahweh. Also a wall inscription, dated to the late 6th century BCE, with mention of Yahweh had been found in a tomb at Khirbet Beit Lei.

Yahweh is mentioned also in the Lachish letters (587 BCE) and the slightly earlier Tel Arad ostraca, and on a stone from Mount Gerizim (III or beginning of II century BCE).

The theonyms YHW and YHH are found in the Elephantine papyri of about 500 BCE. One ostracon with YH is thought to have lost the final letter of an original YHW. These texts are in Aramaic, not the language of the Hebrew Tetragrammaton (YHWH) and, unlike the Tetragrammaton, are of three letters, not four. However, because they were written by Jews, they are assumed to refer to the same deity and to be either an abbreviated form of the Tetragrammaton or the original name from which the name YHWH developed. Kristin De Troyer says that YHW or YHH, and also YH, are attested in the fifth and fourth-century BCE papyri from Elephantine and Wadi Daliyeh: "In both collections one can read the name of God as Yaho (or Yahu) and Ya". The name YH (Yah/Jah), the first syllable of "Yahweh", appears 50 times in the Old Testament, 26 times alone (Exodus 15:2; 17:16; and 24 times in the Psalms), 24 times in the expression "Hallelujah". Thomas Römer holds that "the original pronunciation of Yhwh was 'Yahô' or 'Yahû'". An Egyptian hieroglyphic inscription of the Pharaoh Amenhotep III (1402-1363 BCE) mentions a group of Shasu whom it calls "the Shashu of Yhw³" (read as: ''ja-h-wi'' or ''ja-h-wa''). James D. G. Dunn and John W. Rogerson tentatively suggest that the Amenhotep III inscription may indicate that worship of Yahweh originated in an area to the southeast of Palestine. A later inscription from the time of Ramesses II (1279-1213) in West Amara associates the Shasu nomads with ''S-rr'', interpreted as Mount Seir, spoken of in some texts as where Yahweh comes from. Frank Moore Cross says: "It must be emphasized that the Amorite verbal form is of interest only in attempting to reconstruct the proto-Hebrew or South Canaanite verbal form used in the name Yahweh. We should argue vigorously against attempts to take Amorite yuhwi and yahu as divine epithets." According to De Troyer, the short names, instead of being ineffable like "Yahweh", seem to have been in spoken use not only as elements of personal names but also in reference to God: "The Samaritans thus seem to have pronounced the Name of God as Jaho or Ja." She cites Theodoret (c. 393 – c. 460) as that the shorter names of God were pronounced by the Samaritans as "Iabe" and by the Jews as "Ia". She adds that the Bible also indicates that the short form "Yah" was spoken, as in the phrase "Halleluyah". The ''Patrologia Graeca'' texts of Theodoret differ slightly from what De Troyer says. In ''Quaestiones in Exodum'' 15 he says that Samaritans pronounced the name Ἰαβέ and Jews the name Άϊά. (The Greek term Άϊά is a transcription of the Exodus 3:14 phrase אֶהְיֶה (''ehyeh''), "I am".) In ''Haereticarum Fabularum Compendium'' 5.3, he uses the spelling Ἰαβαί.

Among the Jews in the Second Temple Period magical amulets became very popular. Representations of the Tetragrammaton name or combinations inspired by it in languages such as Greek and Coptic, giving some indication of its pronunciation, occur as names of powerful agents in Jewish magical papyri found in Egypt. ''Iave'' and ''Yaba'' occurs frequently, "apparently the Samaritan enunciation of the tetragrammaton YHWH (Yahweh)". The most commonly invoked god is Ιαω, another vocalization of the tetragrammaton YHWH. There is a single instance of the heptagram , ''Yāwē'' is found in an Ethiopian Christian list of magical names of Jesus, purporting to have been taught by him to his disciples.