Shiva (; sa|शिव , , ISO: , , ), also known as Mahadeva (), is one of the principal deities of Hinduism. He is the Supreme Being in Shaivism, one of the major traditions within Hinduism. Shiva has pre-Vedic tribal roots, and the figure of Shiva as we know him today is an amalgamation of various older non-Vedic and Vedic deities, including the Rigvedic storm god Rudra who may also have non-Vedic origins, into a single major deity. Shiva is known as "The Destroyer" within the Trimurti, the Hindu trinity that includes Brahma and Vishnu. In the Shaivite tradition, Shiva is the Supreme Lord who creates, protects and transforms the universe. In the Shakta tradition, the Goddess, or Devi, is described as one of the supreme, yet Shiva is revered along with Vishnu and Brahma. A goddess is stated to be the energy and creative power (Shakti) of each, with Parvati (Sati) the equal complementary partner of Shiva. He is one of the five equivalent deities in Panchayatana puja of the Smarta tradition of Hinduism. Shiva is the primal Atman (soul, self) of the universe. There are many both benevolent and fearsome depictions of Shiva. In benevolent aspects, he is depicted as an omniscient Yogi who lives an ascetic life on Mount Kailash as well as a householder with wife Parvati and his two children, Ganesha and Kartikeya. In his fierce aspects, he is often depicted slaying demons. Shiva is also known as Adiyogi Shiva, regarded as the patron god of yoga, meditation and arts. The iconographical attributes of Shiva are the serpent around his neck, the adorning crescent moon, the holy river Ganga flowing from his matted hair, the third eye on his forehead, the trishula or trident, as his weapon, and the damaru drum. He is usually worshipped in the aniconic form of lingam. Shiva is a pan-Hindu deity, revered widely by Hindus, in India, Nepal and Sri Lanka.

Etymology and other names

The Sanskrit word "" ( sa|शिव|label=Devanagari, also transliterated as ''shiva'') means, states Monier Monier-Williams, "auspicious, propitious, gracious, benign, kind, benevolent, friendly". The roots of in folk etymology are ''śī'' which means "in whom all things lie, pervasiveness" and ''va'' which means "embodiment of grace". The word Shiva is used as an adjective in the Rig Veda (approximately 1700–1100 BC), as an epithet for several Rigvedic deities, including Rudra. The term Shiva also connotes "liberation, final emancipation" and "the auspicious one", this adjective sense of usage is addressed to many deities in Vedic layers of literature. The term evolved from the Vedic ''Rudra-Shiva'' to the noun ''Shiva'' in the Epics and the Puranas, as an auspicious deity who is the "creator, reproducer and dissolver". Sharva, sharabha presents another etymology with the Sanskrit root ''-'', which means "to injure" or "to kill", interprets the name to connote "one who can kill the forces of darkness". The Sanskrit word ' means "relating to the god Shiva", and this term is the Sanskrit name both for one of the principal sects of Hinduism and for a member of that sect. It is used as an adjective to characterize certain beliefs and practices, such as Shaivism. The ''Vishnu sahasranama'' interprets ''Shiva'' to have multiple meanings: "The Pure One", and "the One who is not affected by three Guṇas of Prakṛti (Sattva, Rajas, and Tamas)". Shiva is known by many names such as Viswanatha (lord of the universe), Mahadeva, Mahandeo, Mahasu, Mahesha, Maheshvara, Shankara, Shambhu, Rudra, Hara, Trilochana, Devendra (chief of the gods), Neelakanta, Subhankara, Trilokinatha (lord of the three realms), and Ghrneshwar (lord of compassion). The highest reverence for Shiva in Shaivism is reflected in his epithets ' ("Great god"; ' "Great" and ''deva'' "god"), ' ("Great Lord"; ' "great" and ' "lord"), and '''' ("Supreme Lord"). Sahasranama are medieval Indian texts that list a thousand names derived from aspects and epithets of a deity. There are at least eight different versions of the ''Shiva Sahasranama'', devotional hymns (''stotras'') listing many names of Shiva. The version appearing in Book 13 () of the ''Mahabharata'' provides one such list. Shiva also has ''Dasha-Sahasranamas'' (10,000 names) that are found in the ''Mahanyasa''. The ''Shri Rudram Chamakam'', also known as the ''Śatarudriya'', is a devotional hymn to Shiva hailing him by many names.

The Shiva-related tradition is a major part of Hinduism, found all over the Indian subcontinent, such as India, Nepal, Sri Lanka, and Southeast Asia, such as Bali, Indonesia. Shiva has pre-Vedic tribal roots, having "his origins in primitive tribes, signs and symbols." The figure of Shiva as we know him today is an amalgamation of various older deities into a single figure, due to the process of Sanskritization and the emergence of the Hindu synthesis in post-Vedic times. How the persona of Shiva converged as a composite deity is not well documented, a challenge to trace and has attracted much speculation. According to Vijay Nath: An example of assimilation took place in Maharashtra, where a regional deity named Khandoba is a patron deity of farming and herding castes. The foremost center of worship of Khandoba in Maharashtra is in Jejuri. Khandoba has been assimilated as a form of Shiva himself, in which case he is worshipped in the form of a lingam. Khandoba's varied associations also include an identification with Surya and Karttikeya.

Scholars have interpreted early prehistoric paintings at the Bhimbetka rock shelters, carbon dated to be from pre-10,000 BCE period, as Shiva dancing, Shiva's trident, and his mount Nandi. Rock paintings from Bhimbetka, depicting a figure with a trishul, have been described as Nataraja by Erwin Neumayer, who dates them to the mesolithic.

Indus Valley and the Pashupati seal 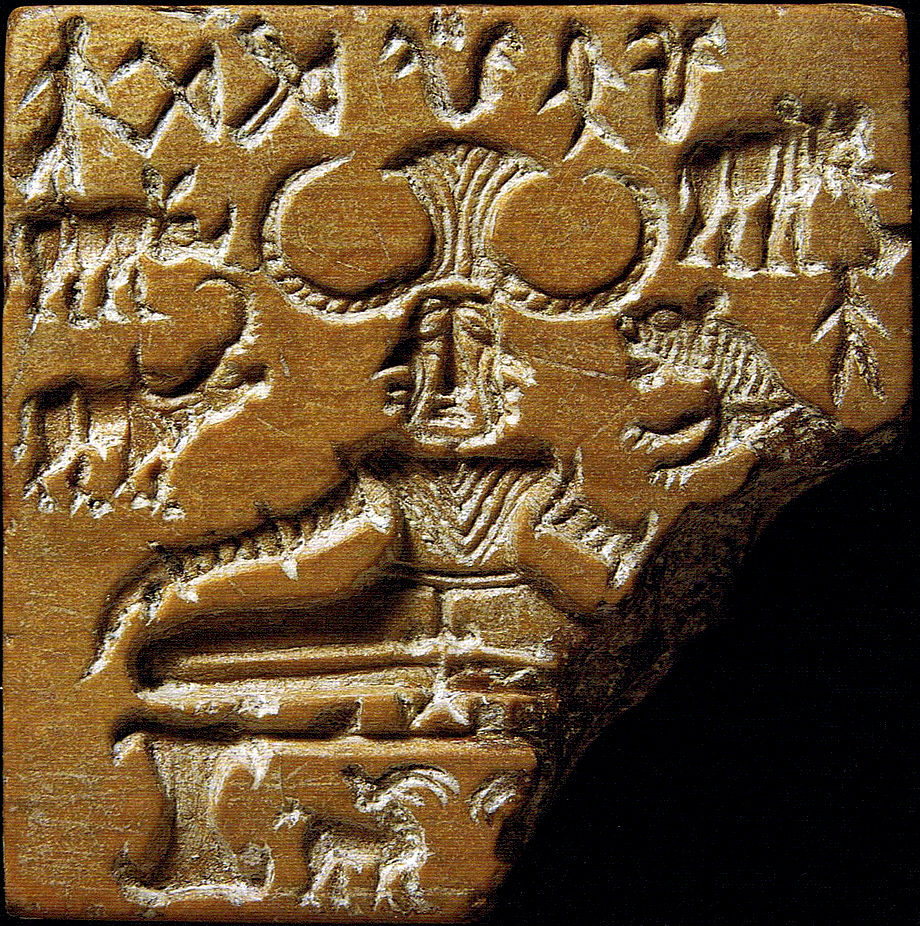 Of several Indus valley seals that show animals, one seal that has attracted attention shows a large central figure, either horned or wearing a horned headdress and possibly ithyphallic, seated in a posture reminiscent of the Lotus position, surrounded by animals. This figure was named by early excavators of Mohenjo-daro as ''Pashupati'' (Lord of Animals, Sanskrit '), an epithet of the later Hindu deities Shiva and Rudra. Sir John Marshall and others suggested that this figure is a prototype of Shiva, with three faces, seated in a "yoga posture" with the knees out and feet joined. Semi-circular shapes on the head were interpreted as two horns. Scholars such as Gavin Flood, John Keay and Doris Meth Srinivasan have expressed doubts about this suggestion.