, officially the ( ceb|Dakbayan sa ; war|Syudad han ; tl|Lungsod ng ), is a in the region of the . According to the , it has a population of inhabitants, making it the second most-populous city in the province after the provincial capital of Tacloban. Ormoc is the economic, cultural, commercial and transportation hub of western Leyte. Ormoc is an independent component city, not subject to regulation from the Provincial Government of Leyte. However, the city is part of the 4th Congressional District of Leyte together with Albuera, Kananga, Merida, Palompon and Isabel, and statistically grouped under the province by the Philippine Statistics Authority. On November 8, 2013, the city was extensively damaged by Super Typhoon Yolanda (Haiyan), having previously suffered severe destruction and loss of life in 1991 from torrential flooding during Tropical Storm Thelma (Uring). The city's name is derived from ''ogmok'', an archaic Visayan term for "lowland" or "depressed plain". The city also celebrates an annual thanksgiving festival called the ''Piña Festival'' in honor of the saints Peter and Paul in thanks for the bountiful pineapple harvest.

Ormoc City is a port city and is the largest city in Leyte by land area and the second-largest in Eastern Visayas after Calbayog City in Samar. At the head of Ormoc Bay, the city's terrain is mostly of gently rolling plains. It is bounded on the northwest by the towns of Matag-ob and Merida, in the north by Kananga, in the northeast by the towns of Jaro, Pastrana and Dagami, and in the south by the town of Albuera. High mountain ranges separate Ormoc from the eastern portion of Leyte. Numerous rivers and streams traverse Ormoc. Among them are the Bao River in the north, Pagsangahan River in the west, the Bagong-bong River in the south, the Panilahan River also in the south and the Anilao and Malbasag Rivers which border the eastern and western flanks of Ormoc City Proper.

Ormoc became a city by virtue of ''Republic Act No. 179'' on October 20, 1947, becoming the fifteenth city in the Philippines and the first in the Eastern Visayas region. Kananga was created in 1950 from the barrios of Lonoy, Kananga, Rizal, Tugbong, Montebello, Aguiting, Tagaytay, Montealegre, Libungao, Naghalin, and Masarayao which all used to be part of Ormoc City.

On the morning of 5 November 1991, the Ormoc region was inundated by Tropical Storm Uring. The city government recorded 4,922 deaths, 3,000 missing persons, 14,000 destroyed houses and more than P600 million worth of damaged property. None of the 3,000 missing persons were ever found and are now presumed dead. Illegal logging and ''kaingin'' (slash-and-burn farming) were blamed as the reasons of the flood. Heavy rainfall caused water to collect upstream the Anilao and Malbasag rivers until it poured to the lowlands in Ormoc, particularly District 26, also known as Isla Verde. According to Roderick Caballero Deiparine, on 5 November 2011, a monument by national artist Francis Cinco commemorating the 20th anniversary of the event was inaugurated. It sits on top of the mass grave at the Ormoc City Public Cemetery where an estimated 4,900 victims are buried. The sculpture, entitled "Gift of Life", is an abstract depicting a life taken to heaven.

A fire at the Unitop store killed 25 people on Christmas day. The fire started from firecrackers and pyrotechnics that were ignited near the entrance door. The store did not have a permit to sell firecrackers and emergency exits were locked. The charred remains of the victims were found inside a bathroom, where they tried to escape from the blaze.

On November 7, 2013, Typhoon Haiyan, one of the most powerful tropical cyclones ever recorded, made a landfall in the Philippines. While it killed far fewer people as Tropical Storm Uring, it left widespread devastation to the city with destruction and damages in 90% of its structures. 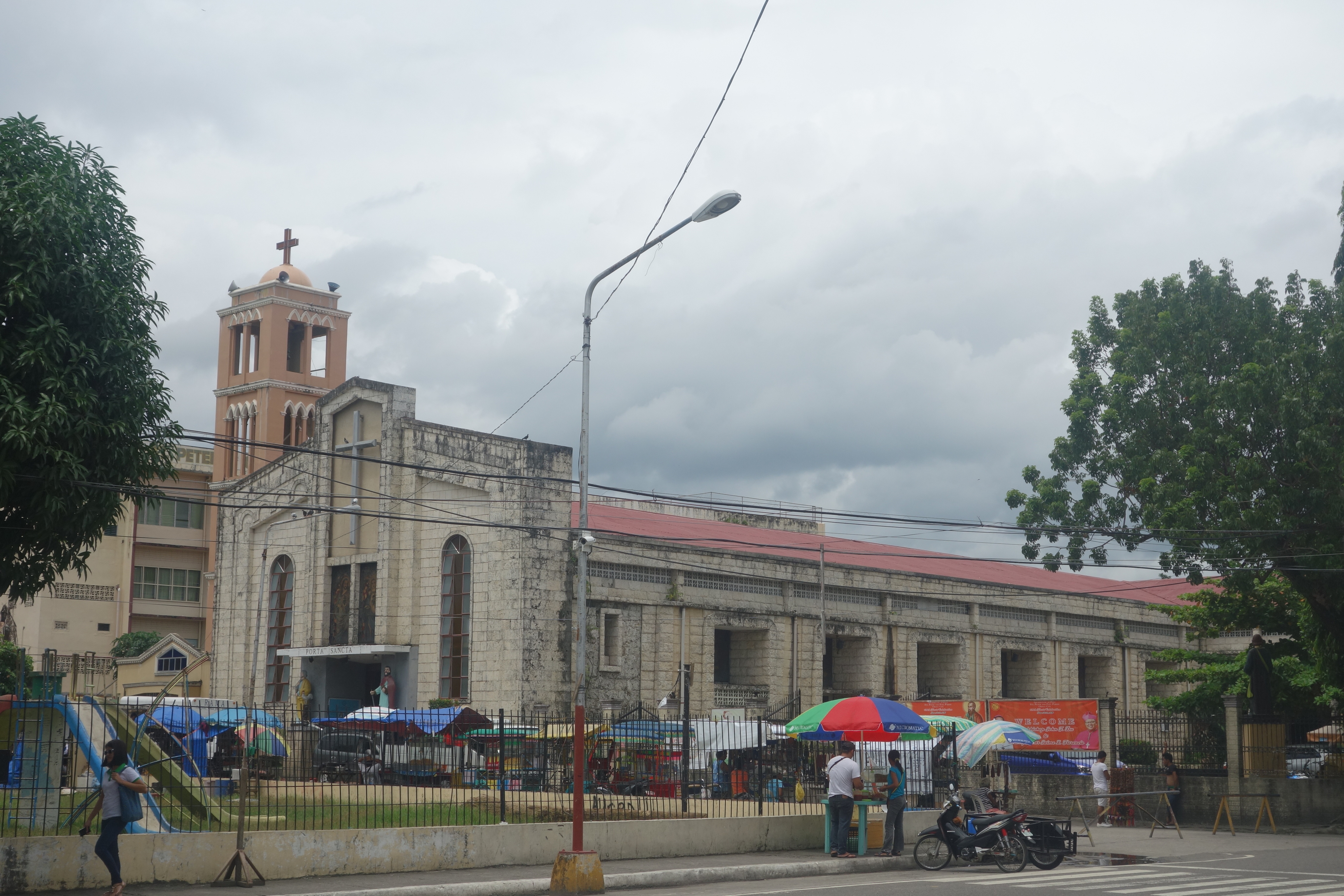 The natives of this city are called Ormocanons, with most being Cebuano speakers, as with the whole western and southern parts of the island of Leyte. A definite number of Waray speakers is also present within the city. Like most Filipinos, Ormocanons are predominantly Roman Catholic, and the city celebrates its annual fiesta in honour of the patron saints Saint Peter and Saint Paul on June 28 and 29. Other main Catholic holy days, including the local fiestas of barangays, are observed throughout the year. There is also a visible Muslim minority within the city and all over the island, evidenced by the mosques within the cityscape and most of them are Maranaos from the twin provinces of Lanao del Norte and Lanao del Sur in Mindanao.

Ormoc's economic base is a mix of agriculture, aquaculture, industry, tourism, and commercial services. Sugar cane, rice and pineapple are the major agricultural production. The city enjoys economic growth because it supplies a large part of the country's power needs with its abundant geothermal power resources from the Tongonan Geothermal Power Plant in Barangay Tongonan and the neighbouring Kananga town. Ormoc is also the gateway to the Leyte Industrial Development Estate in the nearby town of Isabel, home of the Philippine Phosphate Fertilizer Plant, the largest fertilizer factory in Asia, and the Philippine Associated Smelter and Refining Company, the country's biggest copper processing plant, among other industries.

Among sites visited by the city's tourist are: * Lake Danao is a violin shaped lake 3 km long at an elevation of 2,100 feet (640 m) above sea level. There are floating cottages, and boats are available for hire and a future zipline. Lake Danao was formerly called as Lake Imelda. On February 3, 1998 it was renamed and declared as Lake Danao National Park and is protected by the National Integrated Protected Area System Act of 1992. * Tongonan Hotsprings National Park is located at an elevation of 2,000 ft. amid densely forested hills. It is a 272-hectare park at the west end of the Leyte Mountain Trail, 18 km. northeast of Ormoc City. It also has a cool climate, lush tropical vegetation and underbrush, a warm medicinal pool, a cavernous hillside geyser that spouts boiling water and steam hourly and formations exuding sulfuric vapors. It is a valley of geothermal power source that can supply electricity to the whole region. The first geothermal plant to operate in the Philippines. * Pineapple Plantation lies in 210 hectares in rolling terrain located north of the city Barangay Hibunawon. Ormoc's Queen Pineapple is famous for its sweetness, a favourite ''pasalubong'', and the unofficial icon of the city. The plantation is owned by the Locsins (family of the city vice mayor). Ormoc is known for its famous “Queen Pineapple." * Centennial Park The Veteran's Park was constructed in early 1990s in honor of the Filipino soldiers who fought for the liberation of Leyte and the Philippines. The Centennial Marker was erected in 1998 to commemorate the 100th year of Philippine independence.The park is located in the city, it is a leisure and picnic ground for the young and old alike. * Lake Kasudsuran is just one of the three beautiful lakes of Ormoc. It is located at Barangay Gaas, Ormoc City in Leyte. The 5-hectare Lake Kasudsuran is located 27 km (a 45-hr. drive) northeast of Ormoc City on the virgin forest of Barangay Ga-as and Mt. Janagdan, a plateau 1,000 m above sea level. The lake is only accessible by foot. Lake Kasudsuran is also a place to explore in Ormoc City. The lake is a beauty to behold with surrounding fresh green trees and vegetation, and a calm and serene atmosphere. * Alto Peak is known as the highest mountain in Eastern Visayas(Region VIII). The domain is also a home to farming communities that has vegetable plantations, etc. It is also known as Mt. Amindueuen and is technically part of the Municipality of Jaro, Leyte but its jump off is in Barangay Cabintan, Ormoc City. * Sayahan Falls The Sayahan Falls is a newly discovered spot that is located at Sitio Maglahug, Barangay Gaas, Ormoc City. The Sayahan Falls started gaining attention when a local tourist uploaded pictures of it in social media and was widely shared. * Puente dela Reina is known as the oldest bridge in the city. Its cobblestones still intact, relic of an age long gone. It was built in the early 1800s but was completed in 1861. In Spanish era, the bridge was used as docking area for sailboats, vintas of Chinese, Javans and Indonesians who frequented the island to sell their produce. The bridge is still in use to this day. * Western Leyte Guerrilla Warfare Forces Monument The Monument commemorates the Filipino resistance fighters who fought in the guerilla war against the Japanese occupiers in the Second World War * Ruins of Cong. Dominador Tan Residence The Tan Mansion Ruins was built during the 1930s. In World War II, the mansion became a Japanese garrison in Leyte. It was destroyed during the bombing of Ormoc before liberation day, known as the “Battle of Ormoc Bay.”The Tan Mansion Ruins is like a memorial to the Japanese that visits the place. Treated like a shrine as it has a significant part of history of both countries—Japan and Philippines. It serves as a monument representing not only Dominador's young love but also as witness to Ormoc's history.

The Port of Ormoc serves as the seaport of the city. For air transport, Ormoc Airport serves the city.

Ormoc hosts the biggest geothermal power plant in Southeast Asia - the Tongonan Geothermal Power in Barangay Tongonan which supplies electricity not only in the Eastern Visayas Region but power demand in Luzon as well.

Ormoc is the educational center for western Leyte. It has a range of primary and secondary schools, both public and private. Tertiary education was originally offered by St. Peter's College of Ormoc, a Benedictine-run Catholic college and the oldest, followed by Western Leyte College of Ormoc City, Inc.,