Corsican (''corsu'' , ; full name: ''lingua corsa'' , ) is a Romance language from the Italo-Dalmatian family that is spoken predominantly on the Mediterranean island of Corsica (France). Corsican is closely related to the Tuscan varieties from the Italian peninsula, and therefore to the Florentine-based standard Italian. Under the longstanding sway of Pisa and Genoa over Corsica, Corsican used to play the role of a vernacular in combination with Italian, which was the island's official language. In 1859, Italian was replaced by French, owing to the French acquisition from the Republic of Genoa in 1768. Over the next two centuries, the use of French in the place of Italian grew to the extent that, by the Liberation in 1945, all the islanders had a working knowledge of French. The 20th century saw a language shift, with the islanders changing their language practices to the extent that there were no monolingual Corsican speakers left by the 1960s. By 1995, an estimated 65 percent of islanders had some degree of proficiency in Corsican, and a minority amounting to around 10 percent used Corsican as a first language. Some languages that originated from Corsican but are also heavily influenced by Sardinian, and are nowadays considered to be languages on their own, are also spoken, and to some extent written, on the island of Sardinia (Italy). 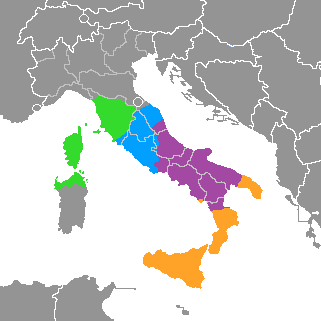 As for Corsican, a bone of contention is whether it should be considered an Italian dialect or its own language. Some scholars argue that Corsican belongs to the Centro-Southern Italian dialects and is closely related to Italy's Tuscan, if not reputed to be part thereof. Mutual intelligibility between Italian and the dialects of Corsican is in fact very high, with particular reference to the Northern varieties. Despite the geographical proximity, it has indeed been noted that the closest linguistic neighbour to Corsican is not Sardinian, which constitutes a separate group, but rather Tuscan and the extreme Southern Italian lects like Siculo-Calabrian. The matter is controversial, as the island was historically and culturally bound to the Italian Mainland from the Middle Ages until the 19th century, and installed in a diglossic system where both Corsican and Italian were perceived as two sociolinguistic levels of the same language; Corsican and Italian traditionally existed on a spectrum, whose proximity line was blurred enough that the locals needed little else but a change of register to communicate with the standard Italian-speaking elites and administration. "Tuscanising" their tongue allowed for a practice of code-mixing typical of the Mainland Italian dialects. One of the characteristics of standard Italian is the retention of the -''re'' infinitive ending, as in Latin ''mittere'' "send". Such infinitival ending is lost in Tuscan as well as Corsican, which has ''mette'' / ''metta'', "to put". The Latin relative pronouns ''qui''/''quae'' "who", and ''quod'' "what", are inflected in Latin; whereas the relative pronoun in Italian for "who" is ''chi'' and "what" is ''che''/''(che) cosa'', it is an uninflected ''chì'' in Corsican. Perhaps the biggest difference between standard Italian and Corsican is that the latter uses the ''u'' termination, whereas standard Italian uses the ''o'' ending. For example, the Italian demonstrative pronouns ''questo'' "this" and ''quello'' "that" become in Corsican ''questu'' or ''quistu'' and ''quellu'' or ''quiddu''. This feature was typical of the early Italian texts during the Middle Ages.

The Corsican language has been influenced by the languages of the major powers taking an interest in Corsican affairs; earlier by those of the medieval Italian powers: Papal States (828–1077), Republic of Pisa (1077–1282) and Republic of Genoa (1282–1768), more recently by France (1768–present), which, since 1859, has promulgated the official Parisian French. The term "gallicised Corsican" refers to the evolution of Corsican starting from about the year 1950. The term "distanciated Corsican" refers to an idealized variety of Corsican following linguistic purism, by means of removing any French-derived elements. The common relationship between Corsica and central Italy can be traced from as far back as the Etruscans, who asserted their presence on the island in as early as 500 BC. In 40 AD, the natives of Corsica did not reportedly speak Latin. The Roman exile, Seneca the Younger, reports that both coast and interior were occupied by natives whose language he was not able to understand (see the Ligurian hypothesis). Whatever language was spoken is still visible in the toponymy or in some words, for instance in the Gallurese dialect spoken in Sardinia ''zerru'' 'pig'. An analogue situation was valid for Sardinian and Sicilian as well. The occupation of the island by the Vandals around the year 469 marked the end of authoritative influence by Latin speakers (see Medieval Corsica). If the natives of that time spoke Latin, they must have acquired it during the late empire. It has been theorised that a Sardinian variety might have been spoken in Corsica, prior to the island's Tuscanisation under Pisan and Genoese rule.

The two most widely spoken forms of the Corsican language are the groups spoken in the Bastia and Corte area (generally throughout the northern half of the island, known as Haute-Corse, ''Cismonte'' or ''Corsica suprana''), and the groups spoken around Sartène and Porto-Vecchio (generally throughout the southern half of the island, known as Corse-du-Sud, ''Pumonti'' or ). The dialect of Ajaccio has been described as in transition. The dialects spoken at Calvi and Bonifacio are closer to the Genoese dialect, also known as Ligurian. This division along the Girolata-Porto Vecchio line was due to the massive immigration from Tuscany which took place in Corsica during the lower Middle Ages: as a result, the northern Corsican dialects became very close to a central Italian dialect like Tuscan, while the southern Corsican varieties could keep the original characteristics of the language which make it much more similar to Sicilian and, only to some extent, Sardinian.

The Northern Corsican macro variety (''Supranacciu'', ''Supranu'', ''Cismuntincu'' or ''Cismontano'') is the most widespread on the island and standardised as well, and is spoken in North-West Corsica around the districts of Bastia and Corte. The dialects of Bastia and Cap Corse belong to the Western Tuscan dialects; they being, with the exception of Florentine, the closest to standard Italian. All the dialects presenting, in addition to what has already been stated, the conditional formed in (e.g. "she would love") are generally considered ''Cismontani'' dialects, situated north of a line uniting the villages of Piana, Vico, Vizzavona, Ghisoni and Ghisonaccia, and also covering the subgroups from the Cap Corse (which, unlike the rest of the island and similarly to Italian, uses ''lu'', ''li'', ''la'', ''le'' as definite articles), Bastia (besides i > e and a > e, u > o: , , , ; a > o: , , ), Balagna, Niolo and Corte (which retain the general Corsican traits: , , , , , , , , , , , , , , ).

Across the Northern and Southern borders of the line separating the Northern dialects from the Southern ones, there is a transitional area picking up linguistic phenomena associated with either of the two groups, with some local peculiarities. Along the Northern line are the dialects around Piana and Calcatoggio, from Cinarca with Vizzavona (which form the conditional tense like in the South), and Fiumorbo through Ghisonaccia and Ghisoni, which have the retroflex sound (written ''-dd-'') for historical ; along the Southern line, the dialects of Ajaccio (retroflex ''-dd-'', realized as -''ghj''-, feminine plurals ending in ''i'', some Northern words like ''cane'' and ''accattà'' instead of ''ghjacaru'' and ''cumprà'', as well as ''ellu''/''ella'' and not ''eddu''/''edda''; minor variations: ''sabbatu'' > ''sabbitu'', ''u li dà'' > ''ghi lu dà''; final syllables often stressed and truncated: ''marinari'' > ''marinà'', > ''panattè'', ''castellu'' > ''castè'', ''cuchjari'' > ''cuchjà''), the Gravona area, Bastelica (which would be classified as Southern, but is also noted for its typical rhotacism: ''Basterga'') and Solenzara, which did not preserve the Latin short vowels: ''seccu'', ''peru'', ''rossu'', ''croci'', ''pozzu''). 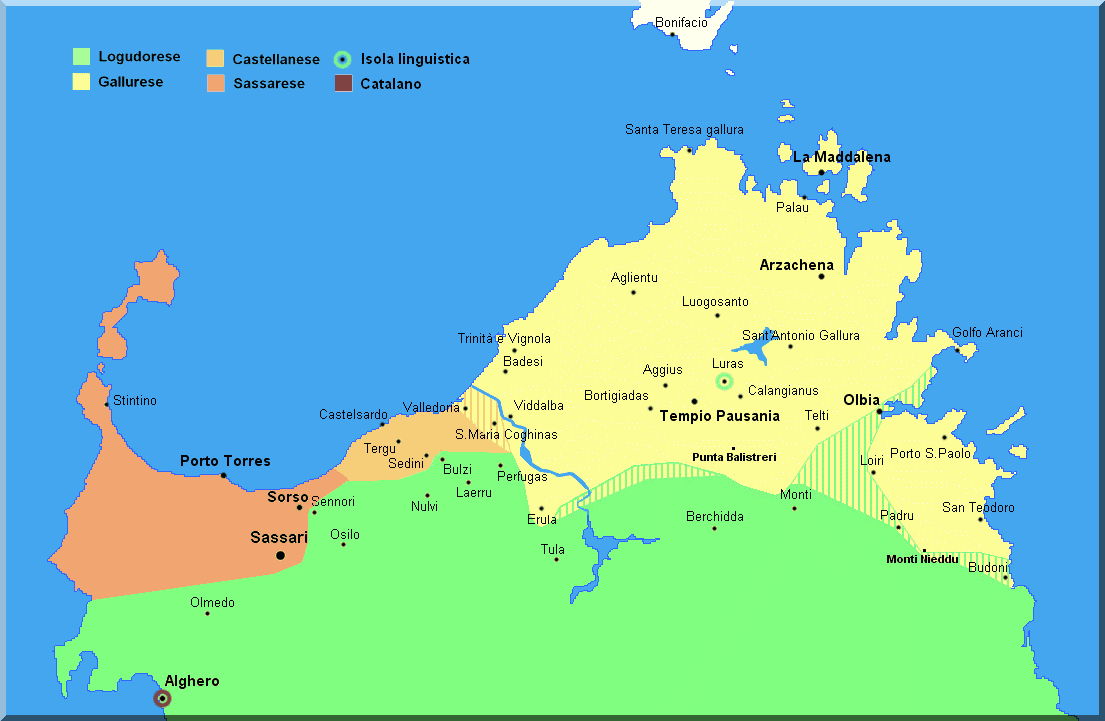 The Gallurese variety is spoken in the extreme north of Sardinia, including the region of Gallura and the archipelago of La Maddalena, and Sassarese is spoken in Sassari and in its neighbourhood, in the northwest of Sardinia. Their geographical position in Sardinia has been theorised to be the result of successive migration waves from Tuscany and the already tuscanized Corsica, whose settlers had slowly displaced the Sardinian varieties spoken therein. Although they both belong to the Italo-Dalmatian family, like Corsican but not Sardinian, it has long been a subject of debate whether the two should be included as dialects either in Corsican or in Sardinian or, in light of their historical development, considered independent languages. A classification has been proposed that they should all be placed in a single category, Southern Romance, but such proposal has not garnered universal support among linguists. On the Maddalena archipelago, which was culturally Corsican but had been annexed to the Savoyard Kingdom of Sardinia a short while before Corsica was ceded by Genoa to France in 1767, the local dialect (called ''isulanu'' or ''maddaleninu'') was brought by fishermen and shepherds from Bonifacio over a long period of immigration in the 17th and 18th centuries. Though influenced by Gallurese, it has maintained the original characteristics of Southern Corsican. In the dialect of ''maddalenino'', as it is known in Italian, there are also numerous words of Genoese and Ponzese origin. On October 14, 1997, Article 2 Item 4 of Law Number 26 of the Autonomous Region of Sardinia granted "''al dialetto sassarese e a quello gallurese''" equal legal status with the other languages on Sardinia. They are thus legally defined as different languages from Sardinian by the Sardinian government.

The January 2007 estimated population of Corsica was 281,000, whereas the figure for the March 1999 census, when most of the studies—though not the linguistic survey work referenced in this article—were performed, was about 261,000 (see under Corsica). Only a fraction of the population at either time spoke Corsican with any fluency. The use of Corsican language over French language has been declining. In 1980 about 70 percent of the population of the island "had some command of the Corsican language." In 1990 out of a total population of about 254,000 the percentage had declined to 50 percent, with only 10 percent using it as a first language.