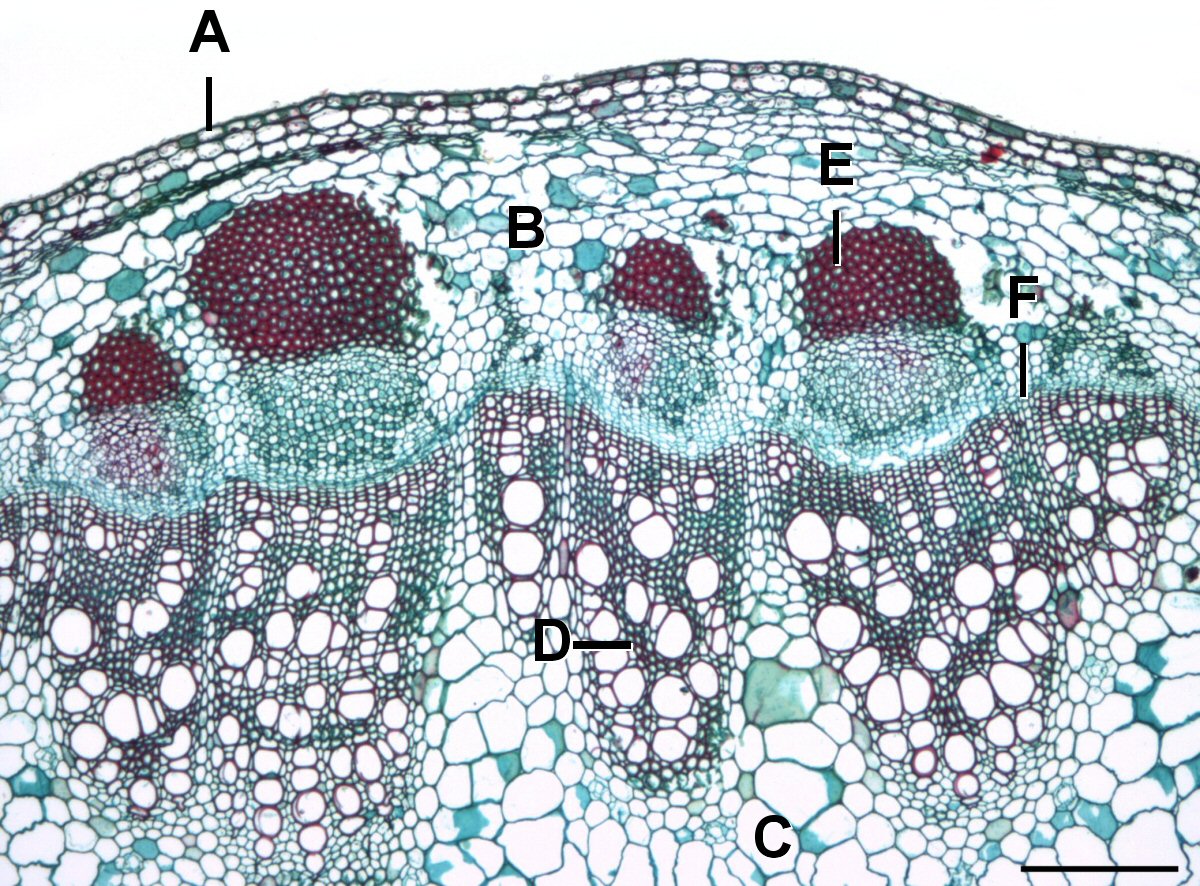 The vascular cambium is the main growth tissue in the stems and roots of many plants, specifically in dicots such as buttercups and oak trees,
gymnosperm The gymnosperms, also known as Acrogymnospermae, are a group of seed-producing plants that includes conifers, cycads, '' Ginkgo'', and gnetophytes. The term "gymnosperm" comes from the composite word in el, γυμνόσπερμος ( el, γ ...
s such as pine trees, as well as in certain vascular plants. It produces secondary
xylem Xylem is one of the two types of transport tissue in vascular plants, the other being phloem. The basic function of xylem is to transport water Water is an Inorganic compound, inorganic, Transparency and translucency, transparent, t ...
inwards, towards the pith, and secondary phloem outwards, towards the bark. In herbaceous plants, it occurs in the vascular bundles which are often arranged like beads on a necklace forming an interrupted ring inside the stem. In woody plants, it forms a cylinder of unspecialized Meristem#Secondary meristems , meristem cells, as a continuous ring from which the new tissues are grown. Unlike the xylem and phloem, it does not transport water, minerals or food through the plant. Other names for the vascular cambium are the main cambium, wood cambium, or bifacial cambium.

Vascular cambia are found in dicots and
gymnosperm The gymnosperms, also known as Acrogymnospermae, are a group of seed-producing plants that includes conifers, cycads, '' Ginkgo'', and gnetophytes. The term "gymnosperm" comes from the composite word in el, γυμνόσπερμος ( el, γ ...
s but not monocots, which usually lack secondary growth. A few leaf types also have a vascular cambium. In dicot and gymnosperm trees, the vascular cambium is the obvious line separating the bark and wood; they also have a cork cambium. For successful grafting, the vascular cambia of the rootstock and scion must be aligned so they can grow together.

The cambium present between primary xylem and primary phloem is called the ''fascicular'' cambium (within vascular bundles). During secondary growth, cells of medullary rays, in a line (as seen in section; in three dimensions, it is a sheet) between neighbouring vascular bundles, become meristematic and form new ''interfascicular'' cambium (between vascular bundles). The fascicular and interfascicular cambia thus join up to form a ring (in three dimensions, a tube) which separates the primary xylem and primary phloem, the ''cambium ring''. The vascular cambium produces secondary xylem on the inside of the ring, and secondary phloem on the outside, pushing the primary xylem and phloem apart. The vascular cambium usually consists of two types of cells: * Fusiform initials (tall, axially oriented) * Ray initials (smaller and round to angular in shape)

The vascular cambium is maintained by a network of interacting signal feedback loops. Currently, both hormones and short peptides have been identified as information carriers in these systems. While similar regulation occurs in other plant meristems, the cambial meristem receives signals from both the xylem and phloem sides for the meristem. Signals received from outside the meristem act to down regulate internal factors, which promotes cell proliferation and differentiation.

The phytohormones that are involved in the vascular cambial activity are auxins, ethylene, gibberellins, cytokinins, abscisic acid and probably more to be discovered. Each one of these plant hormones is vital for regulation of cambial activity. Combination of different concentrations of these hormones is very important in plant metabolism. Auxin hormones are proven to stimulate mitosis, cell production and regulate interfascicular and fascicular cambium. Applying auxin to the surface of a tree stump allowed decapitated shoots to continue secondary growth. The absence of auxin hormones will have a detrimental effect on a plant. It has been shown that mutants without auxin will exhibit increased spacing between the interfascicular cambiums and reduced growth of the Vascular bundle , vascular bundles. The mutant plant will therefore experience a decrease in water, nutrients, and photosynthates being transported throughout the plant, eventually leading to death. Auxin also regulates the two types of cell in the vascular cambium, ray and fusiform initials. Regulation of these initials ensures the connection and communication between xylem and phloem is maintained for the translocation of nourishment and sugars are safely being stored as an energy resource. Ethylene levels are high in plants with an active cambial zone and are still currently being studied. Gibberellin stimulates the cambial cell division and also regulates differentiation of the xylem tissues, with no effect on the rate of phloem differentiation. Differentiation is an essential process that changes these tissues into a more specialized type, leading to an important role in maintaining the life form of a plant. In poplar trees, high concentrations of gibberellin is positively correlated to an increase of cambial cell division and an increase of auxin in the cambial stem cells. Gibberellin is also responsible for the expansion of xylem through a signal traveling from the shoot to the root. Cytokinin hormone is known to regulate the rate of the cell division instead of the direction of cell differentiation. A study demonstrated that the mutants are found to have a reduction in stem and root growth but the secondary vascular pattern of the vascular bundles were not affected with a treatment of cytokinin.

The cambium of most trees are edible. In Scandinavia, it was historically used as a flour to make bark bread.