Click Here for Items Related To - subdivisions of Russia

Russia Russia (russian: link=no, Россия, , ), or the Russian Federation, is a country spanning Eastern Europe and Northern Asia. It is the List of countries and dependencies by area, largest country in the world, covering and encompassing mo ...
is divided into several types and levels of subdivisions.

Since 18 March 2014, the
Russian Federation Russia (russian: link=no, Россия, , ), or the Russian Federation, is a country spanning Eastern Europe and Northern Asia. It is the List of countries and dependencies by area, largest country in the world, covering and encompassing mo ...
consisted of eighty-five federal subjects that are constituent members of the Federation. However, two of these federal subjects—the Republic of Crimea and the federal city of
Sevastopol 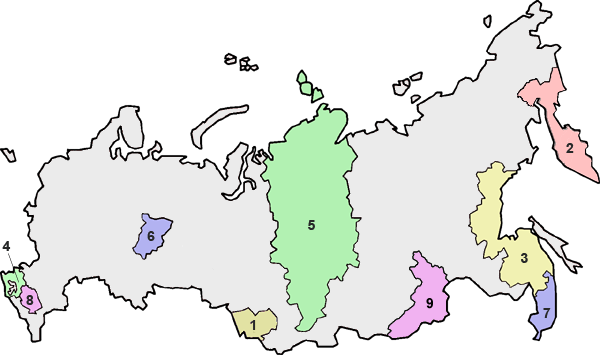 as the constituent members of the Russian Federation. According to the Treaty, the Republic of Crimea is accepted as a federal subject with the status of a republics of Russia, republic while the City of Sevastopol has received federal city status. Neither the Republic of Crimea nor the city of Sevastopol are politically recognized as parts of Russia by international law and Political status of Crimea, most countries.

In the course of the Russian municipal reform of 2004–2005, all federal subjects of Russia were to streamline the structures of local self-government, which is guaranteed by the Constitution of Russia. The reform mandated that each federal subject was to have a unified structure of the municipal government bodies by 1 January 2005, and a law enforcing the reform provisions went in effect on 1 January 2006. According to the law, the units of the municipal division (called "municipal formations") are as follows: *Municipal district, a group of urban and rural settlements, often along with the inter-settlement territories. In practice, municipal districts are usually formed within the boundaries of existing administrative districts (''raion#Municipal district, raions''). **Urban settlement, a city/town or an urban-type settlement, possibly together with adjacent rural and/or urban localities **Rural settlement, one or several types of inhabited localities in Russia#Rural localities, rural localities *Urban okrug, an urban settlement not incorporated into a municipal district. In practice, urban okrugs are usually formed within the boundaries of existing city of federal subject significance, cities of federal subject significance. *Intra-urban territory (intra-urban municipal formation) of a federal city, a part of a federal city's territory. In Moscow, these are called municipal formations (which correspond to districts); in St. Petersburg—''municipal okrugs'', ''towns'', and ''settlements''. In
Sevastopol

(located on the Crimean Peninsula, which is a territory disputed between Russia and Ukraine), they are known as ''municipal okrugs'' and a ''town''. Territories not included as a part of municipal formations are known as ''inter-settlement territories''. The Federal Law was amended on 27 May 2014 to include new types of municipal divisions: *Urban okrug with intra-urban divisions, an urban okrug divided into intra-urban districts at the lower level of the municipal hierarchy **Intra-urban district, a municipal formation within an urban okrug with intra-urban divisions. This municipal formation type would typically be established within the borders of existing city districts (i.e., the administrative divisions in some of the city of federal subject significance, cities of federal subject significance). In June 2014, Chelyabinsk#Administrative and municipal status, Chelyabinsky Urban Okrug became the first urban okrug to implement intra-urban divisions. Federal legislation introduced on May 1, 2019, added an additional territorial unit: *Municipal okrug, a grouping of several settlements without municipal status. Municipal okrugs formally exercise local self-government either through direct means or through electoral and other institutions.

Other types of subdivisions