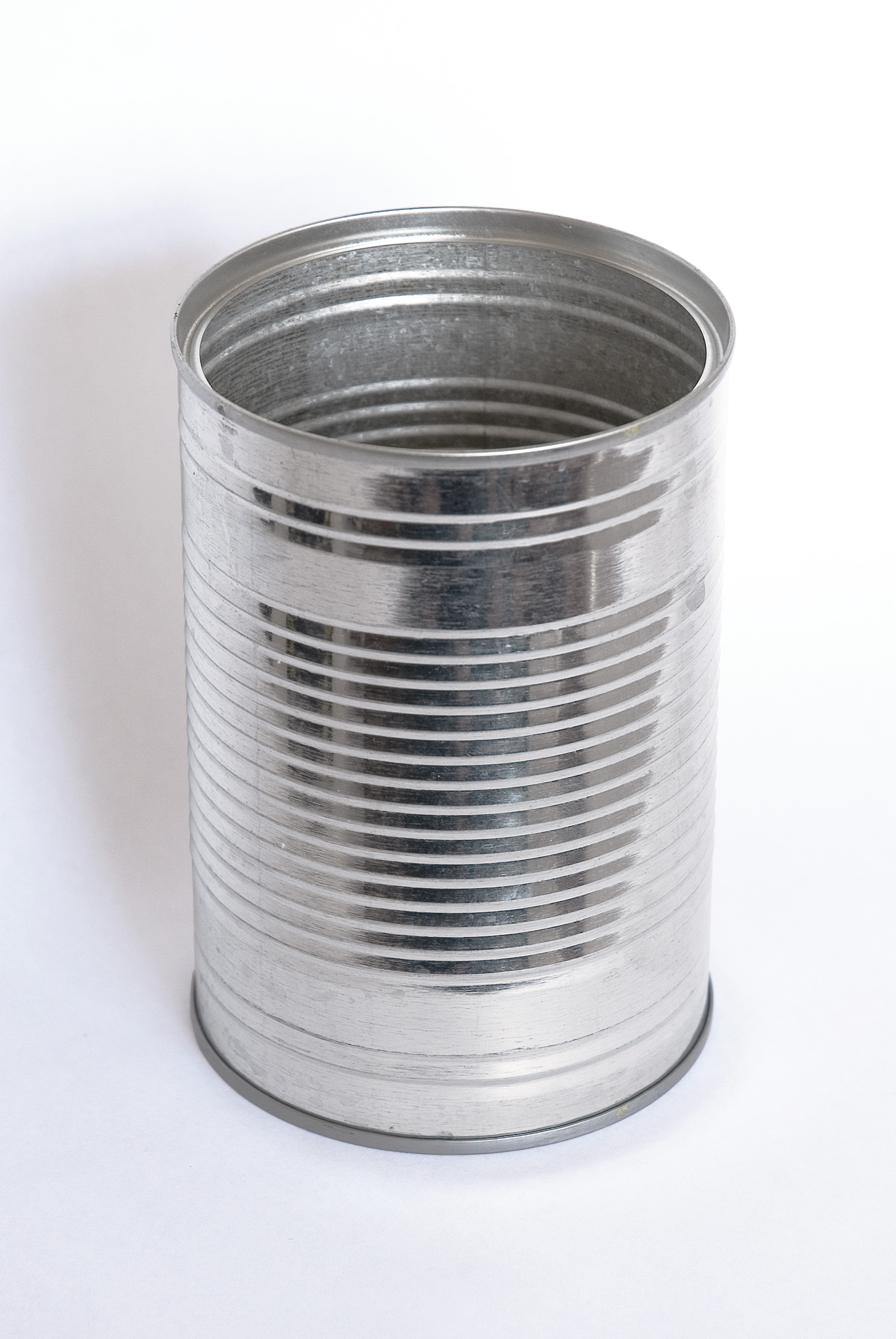 A cylinder (from Greek κύλινδρος – ''kulindros'', "roller", "tumbler") has traditionally been a three-dimensional solid, one of the most basic of
curvilinear

geometric shapes. It is the idealized version of a solid physical
tin can A steel can, tin can, tin (especially in British English, Australian English, Canadian English and South African English), steel packaging, or can is a Packaging and labeling, container for the distribution or storage of goods, made of th ...
having lids on top and bottom. This traditional view is still used in elementary treatments of geometry, but the advanced mathematical viewpoint has shifted to the infinite curvilinear surface and this is how a cylinder is now defined in various modern branches of geometry and topology. The shift in the basic meaning (solid versus surface) has created some ambiguity with terminology. It is generally hoped that context makes the meaning clear. Both points of view are typically presented and distinguished by referring to ''solid cylinders'' and ''cylindrical surfaces'', but in the literature the unadorned term cylinder could refer to either of these or to an even more specialized object, the ''right circular cylinder''.

The definitions and results in this section are taken from the 1913 text ''Plane and Solid Geometry'' by George Wentworth and David Eugene Smith . A ' is a surface consisting of all the points on all the lines which are
parallel

to a given line and which pass through a fixed
plane curve In mathematics, a plane curve is a curve In mathematics, a curve (also called a curved line in older texts) is an object similar to a line (geometry), line, but that does not have to be Linearity, straight. Intuitively, a curve may be thought of ...
in a plane not parallel to the given line. Any line in this family of parallel lines is called an ''element'' of the cylindrical surface. From a
kinematics

A
solid Solid is one of the four fundamental states of matter (the others being liquid, gas and plasma). The molecules in a solid are closely packed together and contain the least amount of kinetic energy. A solid is characterized by structural ...
bounded by a cylindrical surface and two parallel planes is called a (solid) '. The line segments determined by an element of the cylindrical surface between the two parallel planes is called an ''element of the cylinder''. All the elements of a cylinder have equal lengths. The region bounded by the cylindrical surface in either of the parallel planes is called a ' of the cylinder. The two bases of a cylinder are congruent figures. If the elements of the cylinder are perpendicular to the planes containing the bases, the cylinder is a ', otherwise it is called an '. If the bases are disks (regions whose boundary is a
circle A circle is a shape consisting of all point (geometry), points in a plane (mathematics), plane that are at a given distance from a given point, the Centre (geometry), centre; equivalently it is the curve traced out by a point that moves in a pl ...
) the cylinder is called a '. In some elementary treatments, a cylinder always means a circular cylinder. The ' (or altitude) of a cylinder is the
perpendicular In elementary geometry, the property of being perpendicular (perpendicularity) is the relationship between two Line (geometry), lines which meet at a right angle (90 Degree (angle), degrees). The property extends to other related Mathematical ob ...
distance between its bases. The cylinder obtained by rotating a line segment about a fixed line that it is parallel to is a '. A cylinder of revolution is a right circular cylinder. The height of a cylinder of revolution is the length of the generating line segment. The line that the segment is revolved about is called the ' of the cylinder and it passes through the centers of the two bases.

The bare term ''cylinder'' often refers to a solid cylinder with circular ends perpendicular to the axis, that is, a right circular cylinder, as shown in the figure. The cylindrical surface without the ends is called an '. The formulae for the
surface area

and the
volume Volume is the quantity of three-dimensional space enclosed by a closed surface, for example, the space that a substance ( solid, liquid, gas, or plasma) or shape occupies or contains. Volume is often quantified numerically using the SI deri ...
of a right circular cylinder have been known from early antiquity. A right circular cylinder can also be thought of as the solid of revolution generated by rotating a rectangle about one of its sides. These cylinders are used in an integration technique (the "disk method") for obtaining volumes of solids of revolution.

If the base of a circular cylinder has a radius and the cylinder has height , then its
volume Volume is the quantity of three-dimensional space enclosed by a closed surface, for example, the space that a substance ( solid, liquid, gas, or plasma) or shape occupies or contains. Volume is often quantified numerically using the SI deri ...
is given by :. This formula holds whether or not the cylinder is a right cylinder. This formula may be established by using Cavalieri's principle.

In more generality, by the same principle, the volume of any cylinder is the product of the area of a base and the height. For example, an elliptic cylinder with a base having Semi-major and semi-minor axes, semi-major axis , semi-minor axis and height has a volume , where is the area of the base ellipse (= ). This result for right elliptic cylinders can also be obtained by integration, where the axis of the cylinder is taken as the positive -axis and the area of each elliptic cross-section, thus: : Using cylindrical coordinates, the volume of a right circular cylinder can be calculated by integration over ::: :::

Having radius and altitude (height) , the
surface area

A ''right circular hollow cylinder'' (or ') is a three-dimensional region bounded by two right circular cylinders having the same axis and two parallel Annulus (mathematics), annular bases perpendicular to the cylinders' common axis, as in the diagram. Let the height be , internal radius , and external radius . The volume is given by :. Thus, the volume of a cylindrical shell equals 2(average radius)(altitude)(thickness). The surface area, including the top and bottom, is given by :. Cylindrical shells are used in a common integration technique for finding volumes of solids of revolution.

''On the Sphere and Cylinder''

In the treatise by this name, written c. 225 BCE, Archimedes obtained the result of which he was most proud, namely obtaining the formulas for the volume and surface area of a sphere by exploiting the relationship between a sphere and its circumscribed right circular cylinder of the same height and diameter. The sphere has a volume that of the circumscribed cylinder and a surface area that of the cylinder (including the bases). Since the values for the cylinder were already known, he obtained, for the first time, the corresponding values for the sphere. The volume of a sphere of radius is . The surface area of this sphere is . A sculpted sphere and cylinder were placed on the tomb of Archimedes at his request.

In some areas of geometry and topology the term ''cylinder'' refers to what has been called a cylindrical surface. A cylinder is defined as a surface consisting of all the points on all the lines which are parallel to a given line and which pass through a fixed plane curve in a plane not parallel to the given line. Such cylinders have, at times, been referred to as '. Through each point of a generalized cylinder there passes a unique line that is contained in the cylinder. Thus, this definition may be rephrased to say that a cylinder is any ruled surface spanned by a one-parameter family of parallel lines. A cylinder having a right section that is an ellipse, parabola, or hyperbola is called an elliptic cylinder, parabolic cylinder and hyperbolic cylinder, respectively. These are degenerate quadric surfaces.

When the principal axes of a quadric are aligned with the reference frame (always possible for a quadric), a general equation of the quadric in three dimensions is given by : with the coefficients being real numbers and not all of , and being 0. If at least one variable does not appear in the equation, then the quadric is degenerate. If one variable is missing, we may assume by an appropriate rotation of axes that the variable does not appear and the general equation of this type of degenerate quadric can be written as : where :

If and have different signs and , we obtain the ''hyperbolic cylinders'', whose equations may be rewritten as: :

Finally, if assume, without loss of generality, that and to obtain the ''parabolic cylinders'' with equations that can be written as: :

In projective geometry, a cylinder is simply a cone (geometry), cone whose apex (geometry), apex (vertex) lies on the plane at infinity. If the cone is a quadratic cone, the plane at infinity (which passes through the vertex) can intersect the cone at two real lines, a single real line (actually a coincident pair of lines), or only at the vertex. These cases give rise to the hyperbolic, parabolic or elliptic cylinders respectively. This concept is useful when considering degenerate conics, which may include the cylindrical conics.

A ''solid circular cylinder'' can be seen as the limiting case of a regular polygon, -gonal Prism (geometry), prism where approaches infinity. The connection is very strong and many older texts treat prisms and cylinders simultaneously. Formulas for surface area and volume are derived from the corresponding formulas for prisms by using inscribed and circumscribed prisms and then letting the number of sides of the prism increase without bound. One reason for the early emphasis (and sometimes exclusive treatment) on circular cylinders is that a circular base is the only type of geometric figure for which this technique works with the use of only elementary considerations (no appeal to calculus or more advanced mathematics). Terminology about prisms and cylinders is identical. Thus, for example, since a ''truncated prism'' is a prism whose bases do not lie in parallel planes, a solid cylinder whose bases do not lie in parallel planes would be called a ''truncated cylinder''. From a polyhedral viewpoint, a cylinder can also be seen as a dual polyhedron, dual of a bicone as an infinite-sided bipyramid.

*List of shapes *Steinmetz solid, the intersection of two or three perpendicular cylinders

*
Surface area of a cylinder
at MATHguide