In mathematics, Viviani's curve, also known as Viviani's window, is a figure eight shaped space curve named after the Italian mathematician Vincenzo Viviani. It is the intersection of a sphere with a cylinder that is tangent to the sphere and passes through the center of the sphere (see diagram). Before Viviani this curve was studied by Simon de La Loubère and Gilles de Roberval. The projection of Viviani's curve onto a plane perpendicular to the line through the crossing point and the sphere center is the lemniscate of Gerono. In 1692 Viviani tackled the task: Cut out of a half sphere (radius ) two windows, such that the remaining surface (of the half sphere) can be ''squared'', i.e. a square with the same area can be constructed using only compasses and ruler. His solution has an area of (see below). 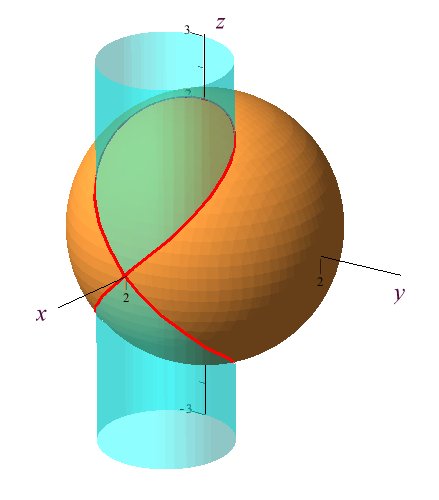 In order to keep the proof for squaring simple, : the ''sphere'' has the equation and : the ''cylinder is upright'' with equation . The cylinder has radius and is tangent to the sphere at point


Properties of the curve


Floor plan, elevation and side plan

Representing the sphere by : and setting yields the curve *: One easily checks, that the spherical curve fulfills the equation of the cylinder. But the boundaries allow only the red part (see diagram) of Viviani's curve. The missing second half (green) has the property With help of this parametric representation it is easy to proof the statement: The area of the half sphere (containing Viviani's curve) minus the area of the two windows is :

The quarter of Viviani's curve that lies in the all-positive quadrant of 3D space cannot be represented exactly by a regular bezier curve of any degree. However, it can be represented exactly by a 3D rational bezier segment of degree 4, and there is an infinite family of rational bezier control points generating that segment. One possible solution is given by the following five control points: : The corresponding rational parametrization is: :


Relation to other curves

* The 8-shaped elevation (see above) is a Lemniscate of Gerono. * Viviani' curve is a special Clelia curve. For a Clelia curve the relation between the angles is