Click Here for Items Related To - The Long Voyage Home
''The Long Voyage Home'' is a 1940 American drama film directed by John Ford. It stars John Wayne, Thomas Mitchell and Ian Hunter. It features Barry Fitzgerald, Wilfrid Lawson, John Qualen, Mildred Natwick, and Ward Bond, among others. The film was adapted by Dudley Nichols from the plays ''The Moon of the Caribbees'', ''In the Zone'', ''Bound East for Cardiff'', and ''The Long Voyage Home'' by Eugene O'Neill. The original plays by Eugene O'Neill were written around the time of World War I and were among his earlier plays. Ford set the story for the motion picture, however, during the early days of World War II. While not one of Ford's best-known works, ''The Long Voyage Home'' continues to be well received. Film critics and scholars have noted Gregg Toland's distinctive cinematography, which serves as a precursor of the film noir aesthetic and hinted at his work for Orson Welles' film ''Citizen Kane'' (1941).

The film tells the story of the crew aboard a British tramp steamer named the SS ''Glencairn'' on the long voyage home from the West Indies to Baltimore and then to England. The crew is a motley, fun-loving, hard-drinking lot. Among them is their consensus leader, a middle-aged Irishman named Driscoll ("Drisk") (Thomas Mitchell), a young Swedish ex-farmer Ole Olsen (John Wayne), a spiteful steward nicknamed Cocky (Barry Fitzgerald), a brooding Lord Jim-like Englishman Smitty (Ian Hunter), and a burly, thoroughly dependable bruiser Davis (Joseph Sawyer), among others. The film opens on a sultry night in a port in the West Indies where the crew have been confined to their ship by order of the captain, yet they yearn as ever for an opportunity to drink and have fun with the ladies. Drisk has arranged to import a boat-load of local ladies, who along with baskets of fruit, have agreed to smuggle bottles of rum on board where, with the acquiescence of the captain, the crew carouse until a minor drunken brawl breaks out and the ladies are ordered off the ship and denied any of their promised compensation. The next day the ship sails to pick up its cargo for its return trip to England. When the crew discovers that the cargo is high explosives, they at first rebel and grumble among themselves that they won't crew the ship if it is carrying such a cargo. But they are easily cowed into submission by the captain and the ship sails, crossing the Atlantic and passing through what they all know is a war zone and potential disaster. After the ship leaves Baltimore with its load of dynamite, the rough seas they encounter become nerve-racking to the crew. When the anchor breaks loose, Yank (Ward Bond) is injured in the effort to secure it. With no doctor on board, nothing can be done for his injury, and he dies. They're also concerned that Smitty might be a German spy because he's so aloof and secretive. After they assault Smitty and restrain and gag him, they force him to give up the key to a small metal box they have found in his bunk which they at first think is a bomb. Opening the box against Smitty's vigorous protests, they discover a packet of letters. When Drisk reads a few, it becomes clear that they are letters from Smitty's wife revealing the fact that Smitty has been an alcoholic, disgraced and perhaps dishonorably discharged from his service with the British navy, and that he is now too ashamed to show himself before his family even though his wife urges him to come home. In the war zone as they near port, a German plane attacks the ship, killing Smitty in a burst of machine gun fire. Reaching England without further incident, the rest of the crew members decide not to sign on for another voyage on the ''Glencairn'' and go ashore, determined to help Ole return to his family in Sweden, whom he has not seen in ten years. In spite of their determination to help the simple, gullible Ole get on his ship for Stockholm, the crew is incapable of passing up the opportunity for a good time drinking and dancing in a seedy bar to which they have been lured by an agent for ships in port looking for crew members. He has his eye on Ole because he is the biggest and strongest of the lot. He drugs Ole's drink, and calls his confederates in to shanghai Ole aboard another ship, the ''Amindra''. Driscoll and the rest of the crew, even though drunk and almost too late, rescue Ole from the ''Amindra'', but Driscoll is clubbed and left on board as the crew makes its escape with Ole. The next morning, the crew straggles back somewhat dejectedly and resignedly to the ''Glencairn'' to sign on for another voyage. A newspaper headline reveals that the ''Amindra'' has been sunk in the Channel by German torpedoes, killing all on board. 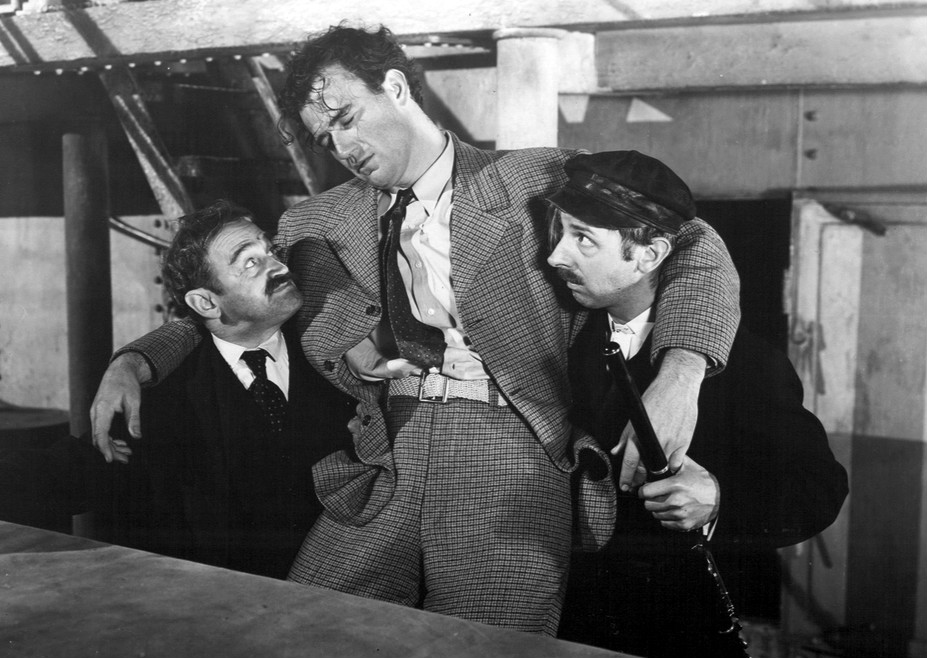 Independent film producer Walter Wanger made film-making history during the production of this film. He hired nine prominent American artists, all painters, to document the dramatic scenes during the film's production. Mr. Wanger offered a commission of over $50,000 to encourage the artists to participate, these funds were secured with the help of Reeves Lowenthal, Director of the Associated American Artists. No other undertaking of this magnitude and purpose had been done before in Hollywood film making. The artists insisted on three things to ensure a quality effort: freedom of choice on subject matter, studios on the production lot, and a projection room for viewing rushes. The artists who participated were Thomas Benton, Grant Wood, George Biddle, James Chapin, Ernest Fiene, Robert Philipp, , Raphael Soyer and Georges Schreiber. Eleven original paintings emerged from this inaugural effort. These toured the country in the museum circuit of the day beginning with a display in the Associated American Artists Galleries on Fifth Avenue in New York City. As Orson Welles did the following year in ''Citizen Kane'', director John Ford shared his title card with cinematographer Gregg Toland in the opening credits for ''The Long Voyage Home''.

The film did poorly in its theatrical release, losing $224,336. Some critics suggested that the film failed to appeal to the general public because it was too dark and lacked a romance. It was released on DVD in 2006 by Warner Bros. Home Video but is now out-of-print. The Criterion Collection has the home video rights to release it. It has not yet been released on DVD or Blu-ray by The Criterion Collection, but is available for streaming on Criterion Channel as of June 2020. It is available as part of a John Ford box set, Region 2.

Critic Bosley Crowther, film critic for ''The New York Times'', liked the screenplay, the message of the film, and John Ford's direction, and wrote "John Ford has truly fashioned a modern Odyssey—a stark and tough-fibered motion picture which tells with lean economy the never-ending story of man's wanderings over the waters of the world in search of peace for his soul...it is harsh and relentless and only briefly compassionate in its revelation of man's pathetic shortcomings. But it is one of the most honest pictures ever placed upon the screen; it gives a penetrating glimpse into the hearts of little men and, because it shows that out of human weakness there proceeds some nobility, it is far more gratifying than the fanciest hero-worshiping fare." The staff at ''Variety'' magazine wrote "Combining dramatic content of four Eugene O'Neill one-act plays, John Ford pilots adventures of a tramp steamer from the West Indies to an American port, and then across the Atlantic with cargo of high explosives. Picture is typically Fordian, his direction accentuating characterizations and adventures of the voyage." ''Harrison's Reports'' called it "A powerful picture, directed with skill and acted with artistry." ''Film Daily'' called it "a powerful, realistic vehicle, human and dramatic from main title to finis." John Mosher of ''The New Yorker'' wrote a rave review, calling it "one of the magnificent films of film history. Never has the sea, its infinite pictorial possibilities, been so comprehended upon the screen and its beauty and its threat so elonquently conveyed." O'Neill told Ford the film was a "grand, deeply moving and beautiful piece of work...a great picture." Rotten Tomatoes reports 100% approval from critics, based on nine reviews.