The State Duma ( rus|Госуда́рственная ду́ма|r=Gosudárstvennaya dúma), commonly abbreviated in Russian as Gosduma ( rus|Госду́ма), is the lower house of the Federal Assembly of Russia, while the upper house is the Council of the Federation. The Duma headquarters are located in central Moscow, a few steps from Manege Square. Its members are referred to as deputies. The State Duma replaced the Supreme Soviet as a result of the new constitution introduced by Boris Yeltsin in the aftermath of the Russian constitutional crisis of 1993, and approved by the Russian people in a referendum. In the 2007 and 2011 Russian legislative elections a full party-list proportional representation with 7% electoral threshold system was used, but this was subsequently repealed. The legislature's term length was initially 2 years in the 1993–1995 elections period, and 4 years in 1999–2007 elections period; since the 2011 elections the term length is 5 years.

The history of the Duma dates back to the Boyar dumas of Kievan Rus' and Muscovite Russia as well to Tsarist Russia. The State Duma was founded in 1905 after the violence and upheaval in the Russian Revolution of 1905 and was Russia's first elected parliament. The first two attempts by Tsar Nicholas II (1868-1918) to make it active were ineffective. Subsequently, each of these Dumas was dissolved after only a few months. The third Duma was the only one to last until the end of its five-year term. After the 1907 electoral reform, the third Duma, elected in November 1907, was largely made up of members of the upper classes, as radical influences in the Duma had almost entirely been removed. The establishment of the Duma after the 1905 Revolution was to herald significant changes to the previous Russian Imperial autocratic system. Furthermore, the Duma was later to have an important effect on Russian history, as it was one of the contributing factors in the February Revolution of 1917, the first of two that year, which led to the abolition of autocracy in Russia and the overthrow of the Tsar. Several generations and 75 years later after another revolutionary era, in the December 1993 elections pro-Yeltsin parties won 175 seats in the Duma versus 125 seats for the left bloc. The balance of power lay with the sixty-four deputies of the ultranationalist Liberal Democratic Party of Russia. Only parties that won more than five percent of the vote were given party-list seats: eight passed the threshold in 1993. In addition to those eight parties, a pool of thirty-five deputies was entitled to form a registered group to reflect regional or sectoral interests. Business was governed by a steering committee, the Duma Council, consisting of one person from each party or group. The most important task was dividing up the chair positions in the Duma's twenty-three committees, which was done as part of a power-sharing "package" deal. Despite the fact that the 1993 Russian Constitution states that the State Duma is elected for four years, it was decided to elect the first State Duma for two years. During the second half of the 1990s, the Duma became an important forum for lobbying by regional leaders and businessmen looking for tax breaks and legislative favors. The work of the leading committees, such as those for defense, foreign affairs, or budget, attracted a good deal of media attention and lobbying activity. In the early 2000s, following the 1999 parliamentary elections, the pro-presidential Unity party and the Communist Party were the leading forces in the State Duma. After the 2003 elections, a Dominant-party system was established in the State Duma with the pro-presidential United Russia party. In all subsequent elections, United Russia has always received an absolute majority of seats (more than 226). After the 2007 elections, a four-party system was formed with a United Russia, Communist Party, Liberal Democratic Party and A Just Russia. Other parties could not get enough votes to go to the State Duma. Only in 2016 elections, two other parties, Rodina and the Civic Platform, were able to get one seat. In 2008, after the adoption of amendments to the Constitution, the term of the State Duma was increased from four to five years. A 2016 exposé by Dissernet showed that one in nine members of the State Duma had obtained academic degrees with theses that were substantially plagiarized and likely ghostwritten. In 2018, it became known that the State Duma Building will be reconstructed. In March 2019 it became known that the repair will begin in May 2019 and will end in September 2020. During this period, the State Duma will temporarily be located in the House of Unions. In addition, a draft of a new conference room, which would be an amphitheatre, was presented.

Constituencies are used for elections. 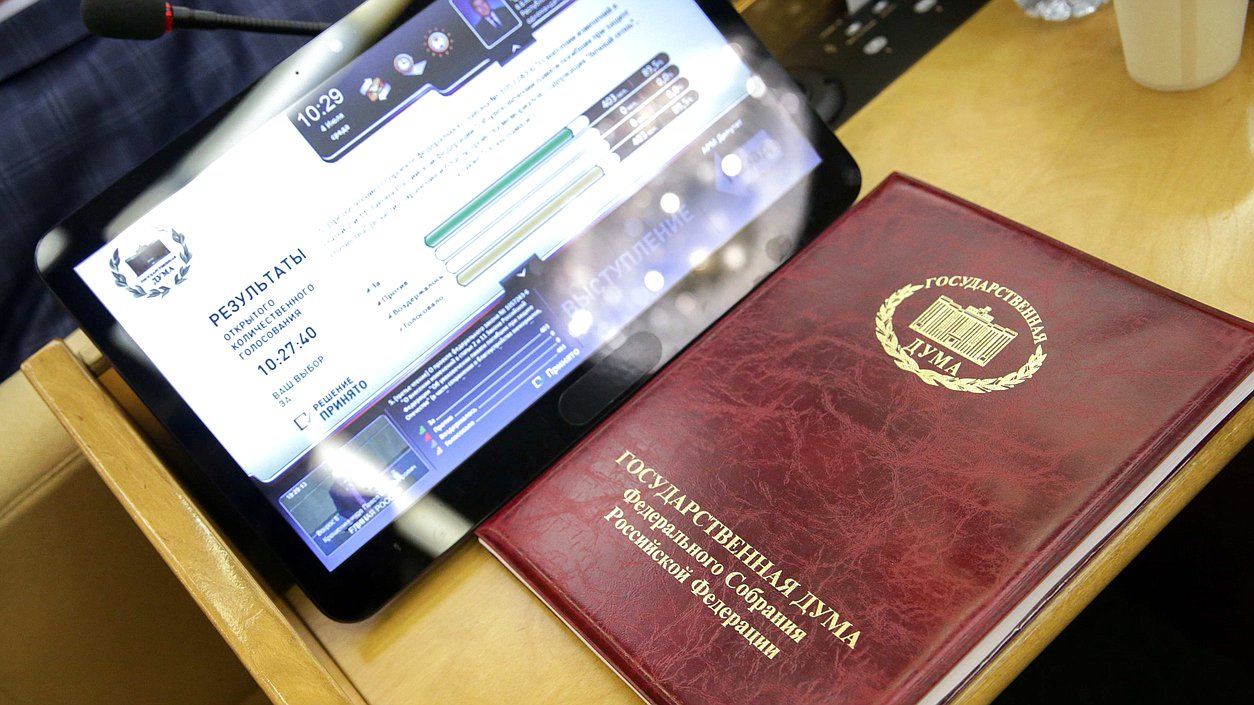 Decrees of the State Duma are adopted by a majority of the total number of deputies of the State Duma, unless another procedure is envisaged by the Constitution. All bills are first approved by the State Duma and are further debated and approved (or rejected) by the Federation Council. Relatively few roll call votes have been published that identify individual deputies' votes.