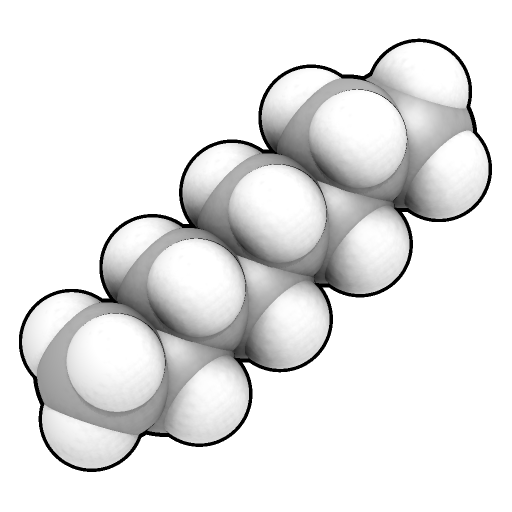 , the active agent in marijuana.]] In chemistry, a space-filling model, also known as a ''calotte model'', is a type of three-dimensional (3D) molecular model where the atoms are represented by spheres whose radii are proportional to the radii of the atoms and whose center-to-center distances are proportional to the distances between the atomic nuclei, all in the same scale. Atoms of different chemical elements are usually represented by spheres of different colors. Space-filling calotte models are also referred to as CPK models after the chemists Robert Corey, Linus Pauling, and Walter Koltun, who over a span of time developed the modeling concept into a useful form. They are distinguished from other 3D representations, such as the ball-and-stick and skeletal models, by the use of the "full size" space-filling spheres for the atoms. They are useful for visualizing the effective shape and relative dimensions of the molecule, and the shapes of surface a given static conformer might present. On the other hand, these models mask the chemical bonds between the atoms, and make it difficult to see the structure of the molecule that is obscured by the atoms nearest to the viewer in a particular pose. For this reason, such models are of greater utility if they can be used dynamically, especially when used with complex molecules (e.g., see the greater understanding of the molecules shape given when the THC model is clicked on to rotate).

Space-filling models arise out of a desire to represent molecules in ways that reflect the electronic surfaces that molecules present, that dictate how they interact, one with another (or with surfaces, or macromolecules such as enzymes, etc.). Crystallographic data are the starting point for understanding static molecular structure, and these data contain the information rigorously required to generate space-filling representations (e.g., see these crystallographic models); most often, however, crystallographers present the locations of atoms derived from crystallography via "thermal ellipsoids" whose cut-off parameters are set for convenience both to show the atom locations (with anisotropies), and to allow representation of the covalent bonds or other interactions between atoms as lines. In short, for reasons of utility, crystallographic data historically have appeared in presentations closer to ball-and-stick models. Hence, while crystallographic data contain the information to create space-filling models, it remained for individuals interested in modeling an effective static shape of a molecule, and the space it occupied, and the ways in which it might present a surface to another molecule, to develop the formalism shown above. In 1952, Robert Corey and Linus Pauling described accurate scale models of molecules which they had built at Caltech.