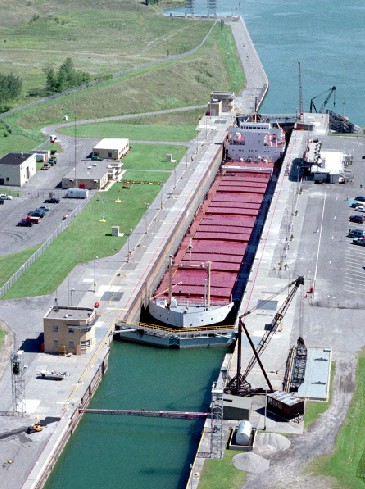 The Saint Lawrence Seaway (french: la Voie Maritime du Saint-Laurent) is a system of locks, canals, and channels in Canada and the United States that permits oceangoing vessels to travel from the Atlantic Ocean to the Great Lakes of North America, as far inland as Duluth, Minnesota, at the western end of Lake Superior. The seaway is named for the Saint Lawrence River, which flows from Lake Ontario to the Atlantic Ocean. Legally, the seaway extends from Montreal, Quebec, to Lake Erie, and includes the Welland Canal. The Saint Lawrence River portion of the seaway is not a continuous canal; rather, it consists of several stretches of navigable channels within the river, a number of locks, and canals along the banks of the Saint Lawrence River to bypass several rapids and dams. A number of the locks are managed by the St. Lawrence Seaway Management Corporation in Canada, and others in the United States by the Saint Lawrence Seaway Development Corporation; the two bodies together advertise the seaway as part of "Highway H2O". The section of the river from Montreal to the Atlantic is under Canadian jurisdiction, regulated by the offices of Transport Canada in the Port of Quebec.

The Saint Lawrence Seaway was preceded by several other canals. In 1871, locks on the Saint Lawrence allowed transit of vessels long, wide, and deep. The First Welland Canal, constructed between 1824 and 1829, had a minimum lock size of long, wide, and deep, but it was generally too small to allow passage of larger oceangoing ships. The Welland Canal's minimum lock size was increased to long, wide, and deep for the Second Welland Canal; to long, wide, and deep with the Third Welland Canal; and to long, wide, and deep for the current (Fourth) Welland Canal. The first proposals for a binational comprehensive deep waterway along the Saint Lawrence were made in the 1890s. In the following decades, developers proposed a hydropower project as inseparable from the seaway; the various governments and seaway supporters believed the deeper water to be created by the hydro project was necessary to make the seaway channels feasible for oceangoing ships. U.S. proposals for development up to and including the First World War met with little interest from the Canadian federal government. But the two national governments submitted Saint Lawrence plans to a group for study. By the early 1920s, both ''The Wooten-Bowden Report'' and the International Joint Commission recommended the project. Although the Liberal Prime Minister William Lyon Mackenzie King was reluctant to proceed, in part because of opposition to the project in Quebec, in 1932 he and the U.S. representative signed a treaty of intent. This treaty was submitted to the U.S. Senate in November 1932 and hearings continued until a vote was taken on March 14, 1934. The majority voted in favor of the treaty, but it failed to gain the necessary two-thirds vote for ratification. Later attempts between the governments in the 1930s to forge an agreement came to naught due to opposition by the Ontario government of Mitchell Hepburn and the government of Quebec. In 1936, John C. Beukema, head of the Great Lakes Harbors Association and a member of the Great Lakes Tidewater Commission, was among a delegation of eight from the Great Lakes states to meet at the White House with US President Franklin D. Roosevelt to obtain his support for the seaway concept. Beukema and Saint Lawrence Seaway proponents were convinced a nautical link would lead to the development of the communities and economies of the Great Lakes region by permitting the passage of oceangoing ships. In this period, exports of grain, along with other commodities, to Europe were an important part of the national economy. Negotiations on the treaty resumed in 1938, and by January 1940 substantial agreement was reached between Canada and the United States. By 1941, President Roosevelt and Prime Minister Mackenzie King made an executive agreement to build the joint hydro and navigation works, but this failed to receive the assent of the U.S. Congress. Proposals for the seaway were met with resistance; the primary opposition came from interests representing harbors on the Atlantic and Gulf coasts and internal waterways and from the railroad associations. The railroads carried freight and goods between the coastal ports and the Great Lakes cities. After 1945, proposals to introduce tolls to the seaway were not sufficient to gain support for the project by the U.S. Congress. Growing impatient, and with Ontario desperate for the power to be generated by hydroelectricity, Canada began to consider developing the project alone. This seized the imagination of Canadians, engendering a groundswell of nationalism around the Saint Lawrence. Canadian Prime Minister Louis St. Laurent advised U.S. President Harry S. Truman on September 28, 1951, that Canada was unwilling to wait for the United States and would build a seaway alone; the Canadian Parliament authorized the founding of the Saint Lawrence Seaway Authority on December 21 of that year. Fueled by this support, Saint Laurent's administration decided during 1951 and 1952 to construct the waterway alone, combined with the Moses-Saunders Power Dam. (This became the joint responsibility of Ontario and New York: as a hydropower dam would change the water levels, it required bilateral cooperation.) The International Joint Commission issued an order of approval for joint construction of the dam in October 1952. U.S. Senate debate on the bill began on January 12, 1953, and the bill emerged from the House of Representatives Committee of Public Works on February 22, 1954. It received approval from the Senate and the House by May 1954. The first positive action to enlarge the seaway was taken on May 13, 1954, when U.S. President Dwight D. Eisenhower signed the Wiley-Dondero Seaway Act to authorize joint construction and establish the Saint Lawrence Seaway Development Corporation as the U.S. authority. The need for cheap haulage of Quebec-Labrador iron ore was one of the arguments that finally swung the balance in favor of the seaway. Groundbreaking ceremonies took place in Massena, New York, on August 10, 1954. That year John C. Beukema was appointed by Eisenhower to the five-member St. Lawrence Seaway Advisory Board. In May 1957, the Connecting Channels Project was begun by the United States Army Corps of Engineers. By 1959, Beukema was on board the U.S. Coast Guard cutter ''Maple'' for the first trip through the U.S. locks, which opened up the Great Lakes to oceangoing ships. On April 25, 1959, large, deep-draft ocean vessels began streaming to the heart of the North American continent through the seaway, a project supported by every administration from Woodrow Wilson through Eisenhower. In the United States, Dr. N.R. Danelian (who was the director of the 13-volume Saint Lawrence Seaway Survey in the U.S. Department of Navigation (1932–63)), worked with the U.S. Secretary of State on Canadian-U.S. issues regarding the seaway, persevering through 15 years to gain passage by Congress of the Seaway Act. He later became president of the Great Lakes St. Lawrence Association to promote seaway development to benefit the American heartland. The seaway was heavily promoted by the Eisenhower administration, which had been concerned with a lack of US control.

The Panama Canal was completed in 1914 and also serves oceangoing traffic. In the 1950s, seaway designers chose not to build the locks to match the size of ships permitted by the 1914 locks at the Panama Canal (, known as the Panamax limit). Instead, the seaway locks were built to match the smaller locks of Welland Canal, which opened in 1932. The seaway locks permit passage of a ship long by feet wide (the Seawaymax limit).