The Puerto Rico Electric Power Authority (PREPA; Spanish: ''Autoridad de Energía Eléctrica'', ''AEE'') is an electric power company owned by the Commonwealth of Puerto Rico responsible for electricity generation, power distribution, and power transmission on the island. PREPA is the only entity authorized to conduct such business in Puerto Rico, making it a government monopoly, until on January 22, 2018 the former governor of Puerto Rico, Ricardo Rossello, announced that all assets of the company will be sold in a general privatization of PREPA. The authority is ruled by a board of directors appointed by the governor with the advice and consent of the Senate. Since 2014, PREPA is subject to the Puerto Rico Energy Commission, another government agency whose board of directors is also appointed by the governor. Hurricane Maria in September 2017 destroyed PREPA's distribution network, creating a blackout in all parts of the island.

PREPA was originally named the Puerto Rico Water Resources Authority (PRWRA) which was created by Law No. 83 of May 2, 1941, during the governorship of Rexford G. Tugwell. Government-owned, PRWRA unified diverse regional and local electric power companies into one unified electric grid.

Over the years the budget for maintenance, such as clearing trees near power lines, has diminished: in 2007 it was $251 million and in 2014 it was $202 million.

Throughout its history, PREPA has suffered several outages that have left the entire island of Puerto Rico without power. One of these islandwide outages occurred on September 20, 2016 due to a fire at one of PREPA's plants—Central Aguirre. All of Puerto Rico was without power for three days. On occasion, entire sectors are left without power when an animal, such as a cat or an iguana, causes damage to the system. 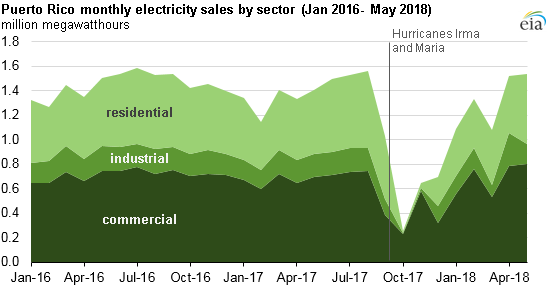 At the first days of September 2017, the eye of Hurricane Irma passed north of the island. The strong winds left 1 million residents without power. Power had been restored to 980,000 people by September 20, when Hurricane Maria struck, leaving nearly the entire island without power. Two weeks later, power had been restored to about 10% of customers. Full restoration was expected to take months, and many Puerto Ricans bought generators. Electric companies in unaffected areas ordinarily make contracts for speedy assistance to those hit by disaster, but in this case negotiations took weeks. The initial $300 million contract for power restoration was given to Whitefish Energy, a Montana company which had only two employees on the day the hurricane struck. The award was controversial on those and other grounds, and was cancelled on October 29. By December 2017, the Army Corps of Engineers had other contractors in place, along with crews brought in through mutual aid agreements with utilities such as Con Edison. Six weeks after Hurricane Maria, 30% of customers had been restored. After two months, almost half had been restored. On January 6, 2018, representatives of FEMA, the U.S. Army Corps of Engineers and their armed security details entered a Palo Seco warehouse owned by PREPA to obtain and distribute a massive store of spare parts were needed to restore grid power. PREPA has been accused of hoarding the materials and hence delaying the restoration of power. The equipment has since been distributed. In January 2018, it had been predicted that generation would reach 95% by the following month, and 100% of customers would be restored by June 2018. On April 18, 2018, an accident at a transmission line knocked out the electrical grid of Puerto Rico. All the island lost power. The following afternoon, PREPA announced that service had been restored to 97% of customers, the same percentage as before this blackout. 40,000 customers were still out of service due to the hurricane seven months earlier. With June 1 the official start of the 2018 hurricane season, an estimated 11,000+ customers remained without power, possibly for another two months. Although an estimated $3.8B was spent on power grid work since the September hurricanes, the grid is still considered fragile and vulnerable. PREPA announced a $500M one-year master services agreement with MasTec for further power grid reconstruction and modernization services.

In 2017, during Hurricane Maria an unsolicited offer by New Fortress Energy was made to PREPA. In 2020, a court order required the awarded-contract documents be made public and showed several irregularities including that the company doesn't have a liquid-gas production track record in Puerto Rico and that rather than go through a bidding process, the contract was approved quickly. Chris Christie, the former governor of New Jersey was listed as a paid lobbyist for PREPA, in the documents. Ingrid Vila Biaggi, the former Puerto Rico Chief of Staff, made a request for an independent investigation.

PREPA's board of directors serves as the authority's governing body, with a membership that usually consists of private citizens entrusted with representing the public interest and may or may not include exofficio political officeholders (typically the Secretary of Economic Development and Commerce). Three members of the board are directly elected by consumers by plurality-at-large; two of them by residential consumers and one by commercial ones. However, when both the governor and the legislature belong to the same party, one of the earliest laws amended by the legislature is the one governing PREPA's board composition. The governor is usually required to appoint four members with the advice and consent of the Senate, who along with the incumbent political officeholders which serve in ex officio capacity effectively render the authority a partisan tool rather than an electric utility. The last structural change to the board occurred on June 11, 2018 after governor Ricardo Rossello.

The public corporation also provides fiber optic broadband to private carriers through one of its subsidiary, PREPA Networks. PREPA is also studying the possibility of selling energy to the United States Virgin Islands with the installation of an underwater power cable between Fajardo and the island of St. Thomas—similar to the power cable with which it services its clients in the island municipalities of Vieques and Culebra.

There are four labor unions that represent the workers from the authority exclusively UTIER, UITICE, UEPI, and UPAEE.

As of 2014 the authority carries liabilities of US$10.1 billion against assets of $6 billion. It also operates with a deficit of about $354 million against revenues of $4.8 billion. In terms of costs, $2.6 billion or about 58% of PREPA's expenses are attributed to fuel purchases alone while salaries and collective bargains represent less than 13% of the authority's expenses. On May 23, 2014, Citigroup severely curtailed PREPA's line of credit for fuel purchase, forcing PREPA to run out of cash to pay Petrobras, its main oil supplier. Petrobras, in turn, threatened to cut off further shipments to the authority. This forced the authority to take $100 million out of its Capital Improvements Fund in order to pay its debt to Petrobras. PREPA argues that the different agencies of the government of Puerto Rico owe them more than $290 million in debt, while an additional $375 million of revenue is lost through subsidies enacted by the Puerto Rican legislature. An additional $600 million is owed to the authority by residential and commercial consumers, some of them by consumers living in public housing. The authority argues that it wouldn't have a problem being self-sufficient if it were paid the aforementioned debt and if it weren't forced to give out subsidies. On June 3, 2014, senator Ramón Luis Nieves admitted publicly that, "part of the financial problem at PREPA was provoked by the government and the Puerto Rican legislature." On June 11, 2014, Fitch Ratings downgraded its rating on the authority's to speculative non-investment grade ("junk status") from BB+ to BB while putting the authority on negative rating watch. PREPA filed for bankruptcy in July 2017. PREPAs' two largest creditors are OppenheimerFunds and Franklin Templeton.