Pope John XXIII ( la|Ioannes; it|Giovanni; born Angelo Giuseppe Roncalli, ; 25 November 18813 June 1963) was Bishop of Rome and hence head of the Catholic Church and sovereign of the Vatican City State from 28 October 1958 to his death in 1963. Angelo Giuseppe Roncalli was one of thirteen children born to a family of sharecroppers who lived in a village in Lombardy. He was ordained to the priesthood on 10 August 1904 and served in a number of posts, as nuncio in France and a delegate to Bulgaria, Greece and Turkey. In a consistory on 12 January 1953 Pope Pius XII made Roncalli a cardinal as the Cardinal-Priest of Santa Prisca in addition to naming him as the Patriarch of Venice. Roncalli was unexpectedly elected pope on 28 October 1958 at age 76 after 11 ballots. Pope John XXIII surprised those who expected him to be a caretaker pope by calling the historic Second Vatican Council (1962–1965), the first session opening on 11 October 1962. John XXIII made many passionate speeches during his pontificate. His views on equality were summed up in his statement, "We were all made in God's image, and thus, we are all Godly alike." He made a major impact on the Catholic Church, opening it up to dramatic unexpected changes promulgated at the Vatican Council and by his own dealings with other churches and nations. In Italian politics, he prohibited bishops from interfering with local elections, and he helped the Christian Democratic Party to cooperate with the socialists. In international affairs, his "Ostpolitik" engaged in dialogue with the Communist countries of Eastern Europe. He especially reached out to the Eastern Orthodox churches. His overall goal was to modernize the Church by emphasizing its pastoral role, and its necessary involvement with affairs of state. He dropped the traditional rule of 70 cardinals, increasing the size to 85. He used the opportunity to name the first cardinals from Africa, Japan, and the Philippines. He promoted ecumenical movements in cooperation with other Christian faiths. In doctrinal matters, he was a traditionalist, but he ended the practice of automatically formulating social and political policies on the basis of old theological propositions. He did not live to see the Vatican Council to completion. His cause for canonization was opened on 18 November 1965 by his successor, Pope Paul VI, who declared him a Servant of God. On 5 July 2013, Pope Francis – bypassing the traditionally required second miracle – declared John XXIII a saint, based on his virtuous, model lifestyle, and because of the good which had come from his having opened the Second Vatican Council. He was canonised alongside Pope John Paul II on 27 April 2014. John XXIII today is affectionately known as the "Good Pope" and in Italian, "il Papa buono". 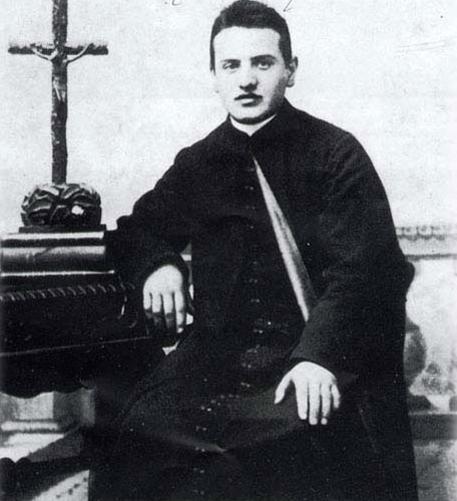 Angelo Giuseppe Roncalli was born on 25 November 1881 in Sotto il Monte, a small country village in the Bergamo province of the Lombardy region of Italy. He was the eldest son of Giovanni Battista Roncalli (1854 – July 1935) and his wife Marianna Giulia Mazzolla (1855 – 20 February 1939), and fourth in a family of 13. His siblings were: * Maria Caterina (1877–1883) * Teresa (1879–1954), who in 1899 married Michele Ghisleni * Ancilla (1880 – 11 November 1953) * Francesco Zaverio (1883–1976), who in 1907 married Maria Carrara * Maria Elisa (1884–1955) * Assunta Casilda (1886 – 23 March 1980), who in 1907 married Giovanni Battista Marchesi * Domenico Giuseppe (22 February 1888 – 14 March 1888) * Alfredo (1889–1972) * Giovanni Francesco (1891–1956), who in 1919 married Caterina Formenti * Enrica (1893–1918) * Giuseppe Luigi (1894–1981), who in 1922 married Ida Biffi * Luigi (1896–1898) His family worked as sharecroppers, as did most of the people of Sotto il Monte – a striking contrast to that of his predecessor, Eugenio Pacelli (Pope Pius XII), who came from an ancient aristocratic family long connected to the papacy. Roncalli was nonetheless a descendant of an Italian noble family, albeit from a secondary and impoverished branch; "(he) derived from no mean origins but from worthy and respected folk who can be traced right back to the beginning of the fifteenth century". The Roncallis maintained a vineyard and cornfields, and kept cattle. In 1889, Roncalli received both his First Communion and Confirmation at the age of 8. On 1 March 1896, Luigi Isacchi, the spiritual director of his seminary, enrolled him into the Secular Franciscan Order. He professed his vows as a member of that order on 23 May 1897. In 1904, Roncalli completed his doctorate in Canon Law and was ordained a priest in the Catholic Church of Santa Maria in Monte Santo in Piazza del Popolo in Rome on 10 August. Shortly after that, while still in Rome, Roncalli was taken to Saint Peter's Basilica to meet Pope Pius X. After this, he would return to his town to celebrate mass for the Assumption.

In 1905, Giacomo Radini-Tedeschi, the new Bishop of Bergamo, appointed Roncalli as his secretary. Roncalli worked for Radini-Tedeschi until the bishop's death on 22 August 1914, two days after the death of Pope Pius X. Radini-Tedeschi's last words to Roncalli were "Angelo, pray for peace". The death of Radini-Tedeschi had a deep effect on Roncalli. During this period Roncalli was also a lecturer in the diocesan seminary in Bergamo. During World War I, Roncalli was drafted into the Royal Italian Army as a sergeant, serving in the medical corps as a stretcher-bearer and as a chaplain. After being discharged from the army in early 1919, he was named spiritual director of the seminary. On 6 November 1921, Roncalli travelled to Rome where he was scheduled to meet the Pope. After their meeting, Pope Benedict XV appointed him as the Italian president of the Society for the Propagation of the Faith. Roncalli would recall Benedict XV as being the most sympathetic of the popes he had met.

In February 1925, the Cardinal Secretary of State Pietro Gasparri summoned him to the Vatican and informed him of Pope Pius XI's decision to appoint him the Apostolic Visitor to Bulgaria (1925–1935). On 3 March, Pius XI also appointed him titular archbishop of Areopolis, Jordan. Roncalli was initially reluctant about a mission to Bulgaria, but he soon relented. His nomination as apostolic visitor was made official on 19 March. Roncalli was consecrated a bishop by Giovanni Tacci Porcelli in the church of San Carlo alla Corso in Rome. On 30 November 1934, he was appointed Apostolic Delegate to Turkey and Greece and titular archbishop of Mesembria, Bulgaria. He became known in Turkey's predominantly Muslim society as "the Turcophile Pope". Roncalli took up this post in 1935 and used his office to help the Jewish underground in saving thousands of refugees in Europe, leading some to consider him to be a Righteous Gentile (see Pope John XXIII and Judaism). In October 1935, he led Bulgarian pilgrims to Rome and introduced them to Pope Pius XI on 14 October. In February 1939, he received news from his sisters that his mother was dying. On 10 February 1939, Pope Pius XI died. Roncalli was unable to see his mother for the end as the death of a pontiff meant that he would have to stay at his post until the election of a new pontiff. Unfortunately, she died on 20 February 1939, during the nine days of mourning for the late Pius XI. He was sent a letter by Cardinal Eugenio Pacelli, and Roncalli later recalled that it was probably the last letter Pacelli sent until his election as Pope Pius XII on 2 March 1939. Roncalli expressed happiness that Pacelli was elected, and, on radio, listened to the coronation of the new pontiff. In 1939, Roncalli was made head of the Vatican Jewish Agency in Geneva. Roncalli remained in Bulgaria at the time that World War II commenced, optimistically writing in his journal in April 1939, "I don't believe we will have a war". At the time that the war did in fact commence, he was in Rome, meeting with Pope Pius XII on 5 September 1939. In 1940, Roncalli was asked by the Vatican to devote more of his time to Greece; therefore, he made several visits there in January and May of that year. The same year, Roncalli departed as head of the Vatican Jewish Agency and migrated to Turkey. However, Roncalli still maintained close relations with the Jews and also intervened to convince Bulgaria's King Boris III to cancel deportations of Greek Jews during the Nazi occupation of Greece.

Efforts during the Holocaust

As nuncio, Roncalli made various efforts during the Holocaust in World War II to save refugees, mostly Jewish people, from the Nazis. Among his efforts were: * Delivery of "immigration certificates" to Palestine through the Nunciature diplomatic courier. * Rescue of Jews by means of certificates of "baptism of convenience" sent by Monsignor Roncalli to priests in Europe.