Oujda ( ar|وجدة|wajda; ber|ⵡⴻⵊⴸⴰ|wejda) is a major Moroccan city in its northeast near the border with Algeria. Oujda is the capital city of the Oriental region of northeastern Morocco and has a population of about 558,000 people. It is located about west of the Moroccan-Algerian border in the south of Beni-Znassen mountains and about south of the Mediterranean Sea coast.

There is some evidence of a settlement during the Roman occupation, which seems to have been under the control of Berbers rather than Romans. The city was founded in 994 by Ziri ibn Atiyya, Berber chief of the Zenata Maghrawa tribe. Ziri was, with his tribe, authorised to occupy the region of Fas, but feeling insecure in that region and that town, and wishing to be nearer to the central Maghrib homeland of his tribe, he moved to Wajda, installed there a garrison and his possessions, appointing one of his relatives as governor. In the mid-11th century, a new quarter with a wall was allegedly added to the primitive core. Yusuf ibn Tashfin occupied the city in 1079, and in the next century, it came under Almohad control, with its fortifications repaired and strengthened under the Almohad caliph Muhammad al-Nasir. In the mid-11th century, Oujda acquired prominence through its strategic position on the road east from Sijilmasa. The city was occupied by the Almoravids in 1079 and in 12th century it was conquered by the Almohads who came after them. Oujda played an important strategic role between the Marinids, based in Fes, and the Abdalwadids of the Kingdom of Tlemcen. The Marinid sultan Abu Yusuf Yaqub destroyed the city when he defeated Sultan Yaghmorasan in 1271. When his successor Abu Yaqub Yusuf conquered the city again in 1296, he destroyed the remaining fortifications but then rebuilt the town with the new walls, a palace, and a Great Mosque (the current one). The town continued to change hands, however. Around 1325, Sultan Abu al-Hasan took the city again during a series of campaigns which extended Marinid control into the central Maghreb for a brief period. Because of its frontier position, the city was frequently contested between the Sharifian dynasties of Morocco – the Saadis, followed by the Alaouites – to the west and the Ottoman Empire to the east, from the 16th century onward. It was often attached to the province or region of Tlemcen, which itself also changed hands several times in this period. During the long reign of Moulay Isma'il (1672–1727), Oujda was firmly under Alaouite control and defended by new fortifications and garrisons built by the sutlan. After Isma'il's death, however, political instability returned. It was only in 1795 that the city was retaken by the Alaouite empire and permanently incorporated into Morocco. The French occupied it in 1844 and again in 1859. To the west of the city is the site of the Battle of Isly which occurred in 1844. In 1907-1908, Oujda was reconquered by General Bugeaud and Marshal Lyautey and used as a French military base to control eastern Morocco. The modern city owes much of its present form to the French, who developed along the roads built at that time. The 1948 Anti-Jewish Riots in Oujda and Jerada occurred in this city. The crowd, sparked off by a minor incident, poured into the Jewish quarter. In the three hours that passed before the army could control the mob, five people (including one Frenchman) had been killed, 30 had been severely injured, and shops and homes had been sacked. The Moroccan border with Algeria is just east of Oujda; on the other side of the border is the Algerian town of Maghnia. The border has been closed since 1994. In 2010, Rod Solaimani chronicled his trip to Oujda for MTV.

The city is located south of the Mediterranean sea and west of Algeria, with an estimated altitude of . south from city centre, is Jbel Hamra, a typical Mediterranean forestand into the east of this forest is Sidi Maafa park. Oujda is located in the south of Beni Znassen mountains.

The city has a cold semi-arid climate (Köppen climate classification ''BSk''). Rainfall is between and per year. It rarely snows in winter; last snowfall was on 5 February 2012. Weather in Oujda is cool but still tepid and wet in winter, hot and dry in summer. 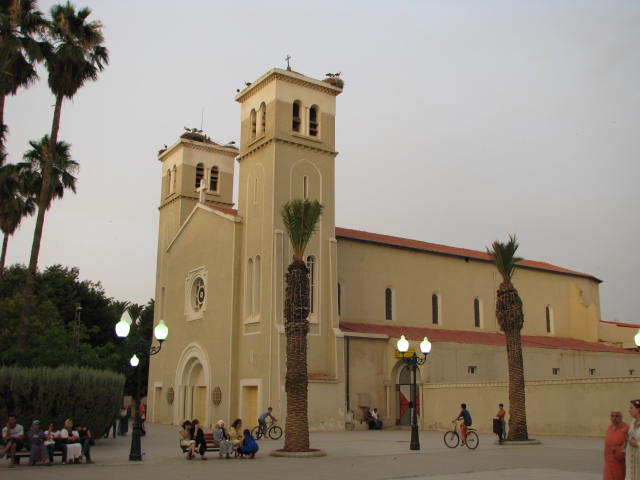 The main characteristic of the city is having the old city in the centre. The old city maintains traditional features of the Moroccan architecture with its narrow and twisted alleys which leads to the houses and different markets such as jewelry market and the leather market. The Grand Mosque of Oujda is one of its historically most important mosques. Bled el Gaada is a Roman era ruins just outside of Ouijda. The ruins consist of a Roman Castra fort 175m by 210m.

Gharnati refers to a variety of music originating in Andalusia. Its name was derived from the Arabic name of the Spanish city of Granada. Gharnati constitutes the musical mode mostly used in the Moroccan city of Oujda, where besides this musical kind is omnipresent and where one organizes each year in June the International Festival of the Gharnati music. Oujda is also the destination of popular music like Regadda and raï.

The province is divided administratively into the following:

Oujda has a cement works. A techno-pole (Oujda Shore) is constructed near the airport.

The city is served by Angads Airport, which has connecting flights to Eindhoven, Brussels, Madrid, Marseille and Paris as well as domestic flights to Casablanca. The city is the endpoint of the main railroad from Casablanca via Fes and Taourirt before the border with Algeria. There are several day and night trains to and from the city, linking it to the western part of the country.

Oujda has a strategic importance because of its location on the border. There are many economic and natural resources, however, problems of overpopulation of the city and increase in unemployment rate up to 18% of the 11% on the national level has led to migration to foreign countries go up to 28.3% of the national total. Oujda relies heavily on trading given its location near the borders of Algeria. The economy of the city is directly related to the border's condition as it represents a passage for businesses directed towards Fes in the west, Talmasan in the east, Figuig in the south and Melilla in the north. On 18 March 2003, King Mohammed VI indicated the importance of reviving the economy of the Eastern regions of Morocco. In the context of this effort,Technopol Oujda was established and the region witnessed road improvement, airport expansion and other projects.

The sports infrastructure in Oujda is composed of a municipal stadium, an Olympic venue, the Honneur Stadium of Oujda, built in 1976, the sports complex 'Rock' including a rugby stadium, a complex tennis in the park Lala Aicha, a golf course and two sports halls.

The first football club to win the Throne Cup of Morocco was the Moloudia Club of Oujda (MCO) in 1957 after defeating the Wydad of Casablanca, in the next year, MCO won his second and successive throne cup against the same club, in 1959, MCO was in its third successive final, but this time the club lost against the FAR of Rabat, the next year MCO played his fourth successive final against the FUS of Rabat and won the cup, in 1962 MCO won its last Throne cup against the Kawkab Athletic Club of Marrakech. After ten years, the Mouloudya of Oujda came back to win in 1972 the Maghreb Cup, three years after MCO won The Botola Pro of Morocco.