Ottoman Syria refers to divisions of the Ottoman Empire within the region of Syria, usually defined as being east of the Mediterranean Sea, west of the Euphrates River, north of the Arabian Desert and south of the Taurus Mountains. Ottoman Syria became organized by the Ottomans upon conquest from the Mamluk Sultanate in the early 16th century as a single eyalet (province) of Damascus Eyalet. In 1534, the Aleppo Eyalet was split into a separate administration. The Tripoli Eyalet was formed out of Damascus province in 1579 and later the Adana Eyalet was split from Aleppo. In 1660, the Eyalet of Safed was established and shortly afterwards renamed Sidon Eyalet; in 1667, the Mount Lebanon Emirate was given special autonomous status within the Sidon province, but was abolished in 1841 and reconfigured in 1861 as the Mount Lebanon Mutasarrifate. The Syrian eyalets were later transformed into the Syria Vilayet, the Aleppo Vilayet and the Beirut Vilayet, following the 1864 Tanzimat reforms. Finally, in 1872, the Mutasarrifate of Jerusalem was split from the Syria Vilayet into an autonomous administration with special status.

View of Bethlehem Before 1516, Syria (region) was part of the Mamluk Empire centered in Lower Egypt. The Ottoman Sultan Selim I conquered Syria in 1516 after defeating the Mamlukes at the Battle of Marj Dabiq near Aleppo in northern Syria. Selim carried on his victorious campaign against the Mamlukes and conquered Egypt in 1517 following the Battle of Ridanieh, bringing an end to the Mamluk Sultanate.

When he first seized Syria in 1516, Selim I kept the administrative subdivisions of the Mamluk period unchanged. After he came back from Egypt in July 1517, he reorganized Syria into one large province or eyalet named ''Şam'' (Arabic/Turkish for "Syria"). The eyalet was subdivided into several districts or sanjaks. 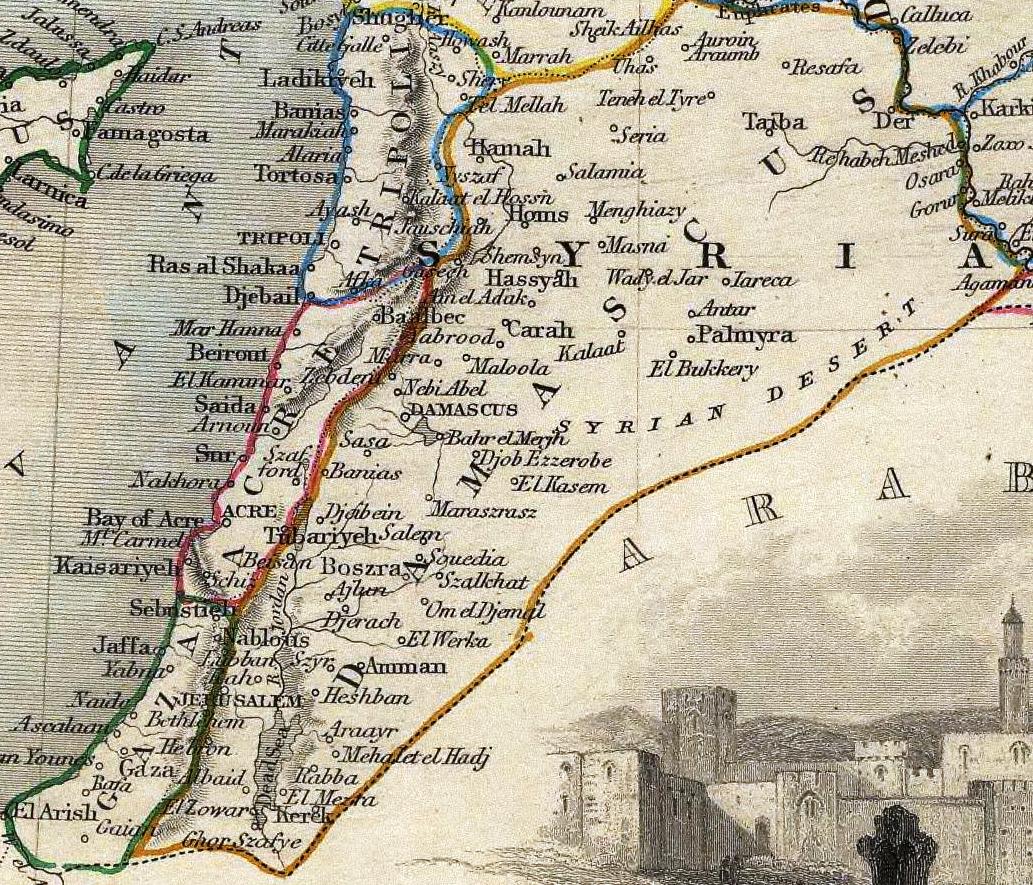 In 1833, the Syrian provinces were ceded to Muhammed Ali of Egypt in the Convention of Kutahya. The firman stated that "The governments of Candia and Egypt are continued to Mahomet Ali. And in reference to his special claim, I have granted him the provinces of Damascus, Tripoli-in-Syria, Sidon, Saphet, Aleppo, the districts of Jerusalem and Nablous, with the conduct of pilgrims and the commandment of the Tcherde (the yearly offering to the tomb of the Prophet). His son, Ibrahim Pacha, has again the title of Sheikh and Harem of Mekka, and the district of Jedda; and farther, I have acquiesced in his request to have the district of Adana ruled by the Treasury of Taurus, with the title of Mohassil." In this period, the Sublime Porte's firmans (decrees) of 1839 and, more decisively, of 1856 – equalizing the status of Muslim and non-Muslim subjects – produced a

"dramatic alienation of Muslims from Christians. The former resented the implied loss of superiority and recurrently assaulted and massacred Christian communities – in Aleppo in 1850, in Nablus in 1856, and in Damascus and Lebanon in 1860. Among the long-term consequences of these bitter internecine conflicts were the emergence of a Christian-dominated Lebanon in the 1920s – 40s and the deep fissure between Christian and Muslim Palestinian Arabs as they confronted the Zionist influx after World War I. "

Following the massacre of thousands of Christian civilians during the 1860 Lebanon conflict, and under growing European pressure, mainly from France, an Ottoman edict issued in 1861 transformed "Al Kaimaqumyateen" or the Twin/Double Qaymakamate, the former regime based on religious rule that led to civil war, into the Mount Lebanon Mutasarrifate, governed by a ''mutasarrıf'' who, according to law, had to be a non-Lebanese Christian.

As part of the Tanzimat reforms, an Ottoman law passed in 1864 provided for a standard provincial administration throughout the empire with the eyalets becoming smaller ''vilayets'', governed by a ''vali'' (governor) still appointed by the imperial Porte but with new provincial assemblies participating in administration. 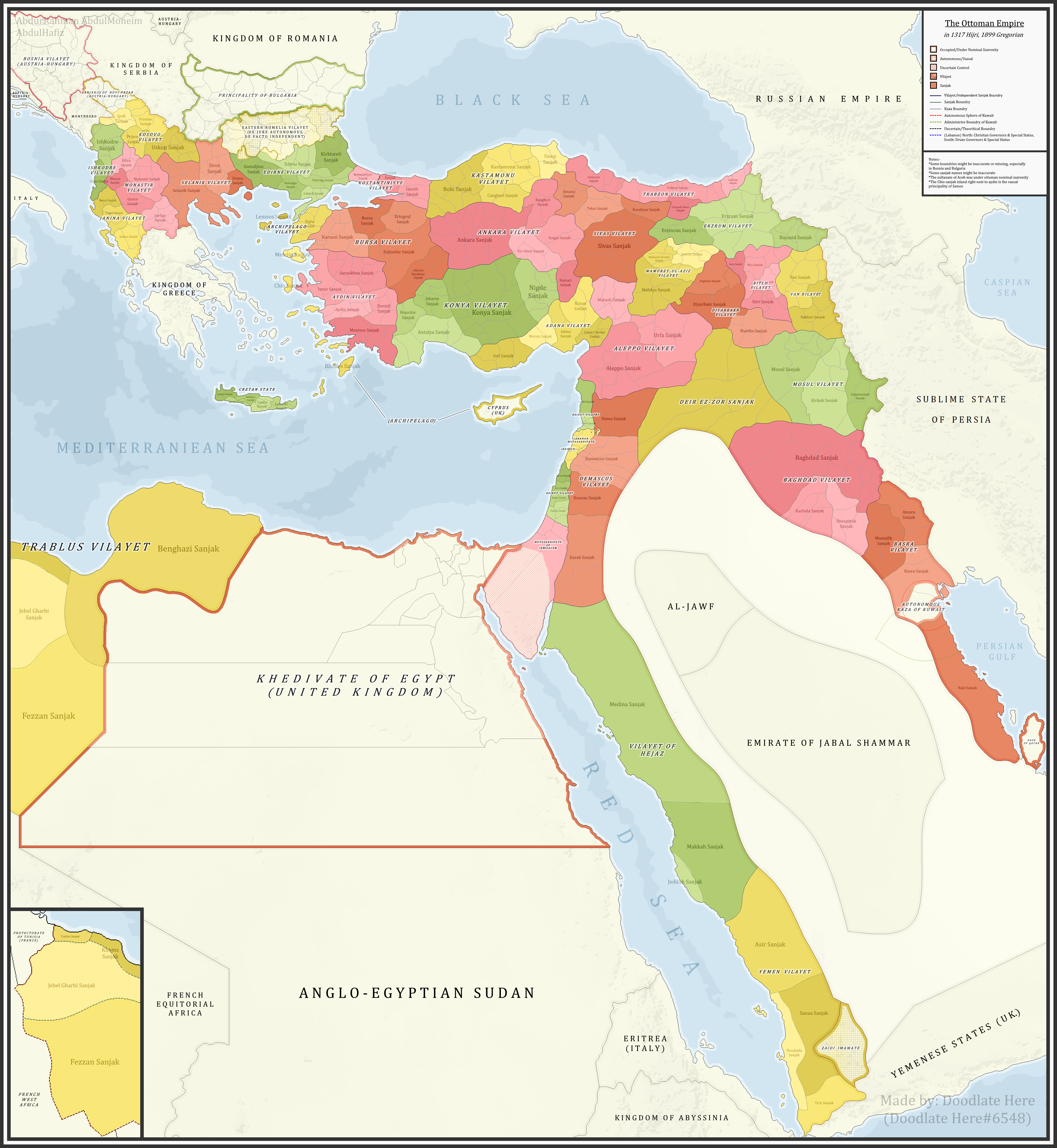 "a country in the outh-westpart of Asia, forming part of the Turkish Empire. It extends eastward from the Mediterranean Sea to the river Euphrates and the Syrian Desert (the prolongation northward of the Arabian Desert), and southward from the Alma-Dagh (ancient Amanus), one of the ranges of the Taurus, to the frontiers of Egypt (Isthmus of Suez) It lies between the parallels of 31° and 37° orth latitude It comprises the vilayet of Syria (Suria), or of Damascus, the vilayet of Beirut, the outh-westpart of the vilayet of Aleppo, and the mutessarrifliks of Jerusalem and the Lebanon. Palestine is included in he countrySyria, comprising the mutessarriflik of Jerusalem and part of the vilayets of Beirut and Syria. The designation Syria is sometimes used in wider sense so as to include the whole of the vilayet of Aleppo and the Zor Sanjak, a large part of Mesopotamia being thus added."