Oligocene faunal stages from youngest to oldest are: 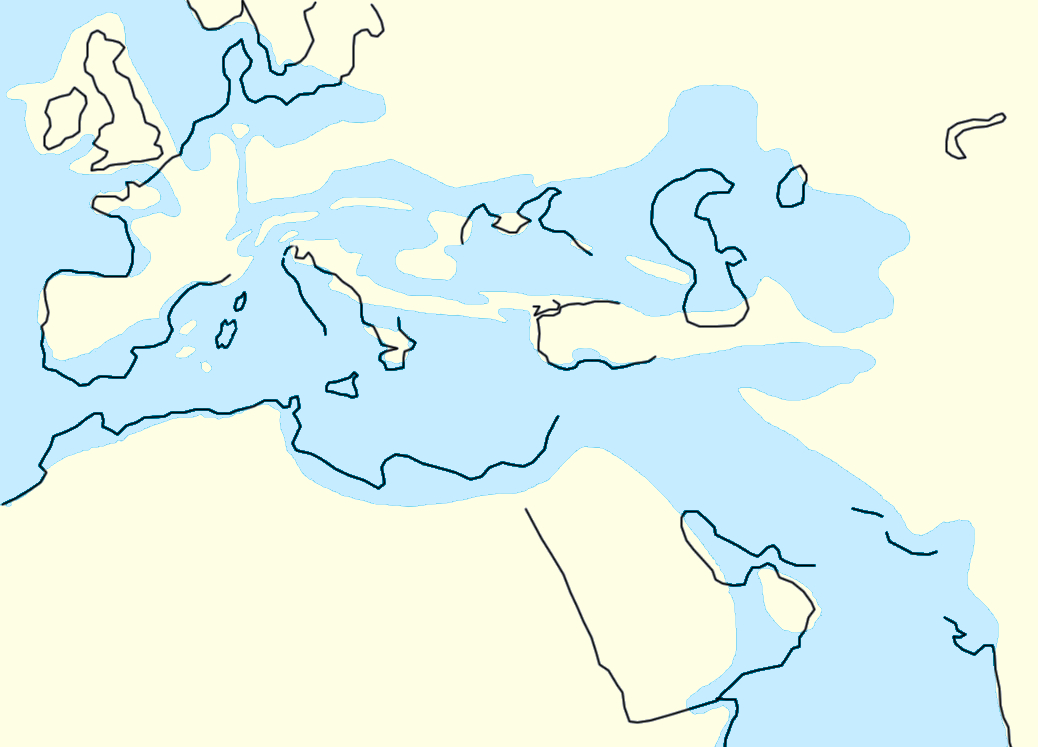 During this epoch, the continents continued to continental drift, drift toward their present positions. Antarctica became more isolated and finally developed an ice cap. Orogeny, Mountain building in western North America continued, and the Alps started to rise in Europe as the African Plate, African plate continued to push north into the Eurasian plate, isolating the remnants of the Tethys Sea. A brief marine incursion marks the early Oligocene in Europe. Marine fossils from the Oligocene are rare in North America. There appears to have been a land bridge in the early Oligocene between North America and Europe, since the Fauna (animals), faunas of the two regions are very similar. Sometime during the Oligocene, South America was finally detached from Antarctica and drifted north towards North America. It also allowed the Antarctic Circumpolar Current to flow, rapidly cooling the Antarctic continent.

Angiosperms continued their expansion throughout the world as tropical and sub-tropical forests were replaced by temperate deciduous forests. Open plains and deserts became more common and grasses expanded from their water-bank habitat in the Eocene moving out into open tracts. However, even at the end of the period, grass was not quite common enough for modern savannas. In North America, subtropical species dominated with cashews and lychee trees present, and temperate trees such as roses, beeches, and pines were common. The legumes spread, while Cyperaceae, sedges, Typha, bulrushes, and ferns continued their ascent.

Even more open landscapes allowed animals to grow to larger sizes than they had earlier in the Paleocene epoch 30 million years earlier. Marine faunas became fairly modern, as did terrestrial vertebrate fauna on the northern continents. This was probably more as a result of older forms dying out than as a result of more modern forms evolving. Many groups, such as equids, entelodonts, rhinos, merycoidodonts, and camelids, became more able to run during this time, adapting to the plains that were spreading as the Eocene rainforests receded. The first felid, ''Proailurus'', originated in Asia during the late Oligocene and spread to Europe. South America was isolated from the other continents and had evolved a quite distinct fauna by the Oligocene. The South American continent was home to animals such as pyrotheria, pyrotheres and astrapotheria, astrapotheres, as well as litopterns and notoungulates. Sebecosuchians, Phorusrhacidae, terror birds, and carnivorous metatheres, like the Borhyaenidae, borhyaenids remained the dominant predators. Brontotheriidae, Brontotheres died out in the Earliest Oligocene, and creodonts died out outside Africa and the Middle East at the end of the period. Multituberculates, an ancient lineage of primitive mammals that originated back in the Jurassic, also became extinct in the Oligocene, aside from the gondwanatheres. The Oligocene was home to a wide variety of mammals. A good example of this would be the White River Fauna of central North America, which were formerly a semiarid prairie home to many different types of endemic mammals, including entelodonts like ''Archaeotherium'', camelids (such as ''Poebrotherium''), running rhinoceratoids, three-toed equids (such as ''Mesohippus''), nimravids, protoceratidae, protoceratids, and early canids like ''Hesperocyon''. Merycoidodonts, an endemic American group, were very diverse during this time. Primates such as ''Proconsul (mammal), Proconsul'' also evolved during the Oligocene. In Asia during the Oligocene, a group of running rhinoceratoids gave rise to the indricotheres, like ''Paraceratherium'', which were the largest land mammals ever to walk the Earth. The marine animals of Oligocene oceans resembled today's fauna, such as the bivalves. Calcareous Cirratulidae, cirratulids appeared in the Oligocene. The fossil record of marine mammals is a little spotty during this time, and not as well known as the Eocene or Miocene, but some fossils have been found. The baleen whales and toothed whales had just appeared, and their ancestors, the Archaeoceti, archaeocete cetaceans began to decrease in diversity due to their lack of echolocation, which was very useful as the water became colder and cloudier. Other factors to their decline could include climate changes and competition with today's modern cetaceans and the requiem sharks, which also appeared in this epoch. Early desmostylians, like ''Behemotops'', are known from the Oligocene. Pinnipeds appeared near the end of the epoch from an otter-like ancestor.

The Oligocene sees the beginnings of modern ocean circulation, with tectonic shifts causing the opening and closing of ocean gateways. Cooling of the oceans had already commenced by the Eocene/Oligocene boundary, and they continued to cool as the Oligocene progressed. The formation of permanent Antarctic ice sheets during the early Oligocene and possible glacial activity in the Arctic may have influenced this oceanic cooling, though the extent of this influence is still a matter of some significant dispute.

The effects of oceanic gateways on circulation

The opening and closing of ocean gateways: the opening of the Drake Passage; the opening of the Tasmanian Passage, Tasmanian Gateway and the closing of the Tethys Ocean, Tethys seaway; along with the final formation of the Greenland–Iceland–Faroes Ridge; played vital parts in reshaping oceanic currents during the Oligocene. As the continents shifted to a more modern configuration, so too did ocean circulation.

The Drake Passage is located between South America and Antarctica. Once the Tasmanian Gateway between Australia and Antarctica opened, all that kept Antarctica from being completely isolated by the Southern Ocean was its connection to South America. As the South American continent moved north, the Drake Passage opened and enabled the formation of the Antarctic Circumpolar Current (ACC), which would have kept the cold waters of Antarctica circulating around that continent and strengthened the formation of Antarctic Bottom Water (ABW). With the cold water concentrated around Antarctica, sea surface temperatures and, consequently, continental temperatures would have dropped. The onset of Antarctic glaciation occurred during the early Oligocene, and the effect of the Drake Passage opening on this glaciation has been the subject of much research. However, some controversy still exists as to the exact timing of the passage opening, whether it occurred at the start of the Oligocene or nearer the end. Even so, many theories agree that at the Eocene/Oligocene (E/O) boundary, a yet shallow flow existed between South America and Antarctica, permitting the start of an Antarctic Circumpolar Current. Stemming from the issue of when the opening of the Drake Passage took place, is the dispute over how great of an influence the opening of the Drake Passage had on the global climate. While early researchers concluded that the advent of the ACC was highly important, perhaps even the trigger, for Antarctic glaciation and subsequent global cooling, other studies have suggested that the δ18O signature is too strong for glaciation to be the main trigger for cooling. Through study of Pacific Ocean sediments, other researchers have shown that the transition from warm Eocene ocean temperatures to cool Oligocene ocean temperatures took only 300,000 years, which strongly implies that feedbacks and factors other than the ACC were integral to the rapid cooling.

= The late Oligocene opening of the Drake Passage

= The latest hypothesized time for the opening of the Drake Passage is during the early Miocene. Despite the shallow flow between South America and Antarctica, there was not enough of a deep water opening to allow for significant flow to create a true Antarctic Circumpolar Current. If the opening occurred as late as hypothesized, then the Antarctic Circumpolar Current could not have had much of an effect on early Oligocene cooling, as it would not have existed.

= The early Oligocene opening of the Drake Passage

= The earliest hypothesized time for the opening of the Drake Passage is around 30 Ma. One of the possible issues with this timing was the continental debris cluttering up the seaway between the two plates in question. This debris, along with what is known as the Shackleton Fracture Zone, has been shown in a recent study to be fairly young, only about 8 million years old. The study concludes that the Drake Passage would be free to allow significant deep water flow by around 31 Ma. This would have facilitated an earlier onset of the Antarctic Circumpolar Current. Currently, an opening of the Drake Passage during the early Oligocene is favored.

The opening of the Tasman Gateway

The other major oceanic gateway opening during this time was the Tasman, or Tasmanian, depending on the paper, gateway between Australia and Antarctica. The time frame for this opening is less disputed than the Drake Passage and is largely considered to have occurred around 34 Ma. As the gateway widened, the Antarctic Circumpolar Current strengthened.

The Tethys Seaway was not a gateway, but rather a sea in its own right. Its closing during the Oligocene had significant impact on both ocean circulation and climate. The collisions of the African plate with the European plate and of the Indian subcontinent with the Asian plate, cut off the Tethys Seaway that had provided a low-latitude ocean circulation. The closure of Tethys built some new mountains (the Zagros range) and drew down more carbon dioxide from the atmosphere, contributing to global cooling.

The gradual separation of the clump of continental crust and the deepening of the tectonic ridge in the North Atlantic that would become Greenland, Iceland, and the Faroe Islands helped to increase the deep water flow in that area. More information about the evolution of North Atlantic Deep Water will be given a few sections down.

Evidence for ocean-wide cooling during the Oligocene exists mostly in isotopic proxies. Patterns of extinction and patterns of species migration can also be studied to gain insight into ocean conditions. For a while, it was thought that the glaciation of Antarctica may have significantly contributed to the cooling of the ocean, however, recent evidence tends to deny this.

Isotopic evidence suggests that during the early Oligocene, the main source of deep water was the North Pacific and the Southern Ocean. As the Greenland-Iceland-Faroe Ridge sank and thereby connected the Norwegian–Greenland sea with the Atlantic Ocean, the deep water of the North Atlantic began to come into play as well. Computer models suggest that once this occurred, a more modern in appearance thermo-haline circulation started.

Evidence for the early Oligocene onset of chilled North Atlantic deep water lies in the beginnings of sediment drift deposition in the North Atlantic, such as the Feni and Southeast Faroe drifts.