Seal of Muhammad Muhammad ( ar|مُحَمَّد, ; c. 570 CE – 8 June 632 CE) was an Arab religious, social, and political leader and the founder of Islam. According to Islamic doctrine, he was a prophet, sent to preach and confirm the monotheistic teachings of Adam, Abraham, Moses, Jesus, and other prophets.

The Quran is the central religious text of Islam. Muslims believe it represents the words of God revealed by the archangel Gabriel to Muhammad. The Quran, however, provides minimal assistance for Muhammad's chronological biography; most Quranic verses do not provide significant historical context.

Important sources regarding Muhammad's life may be found in the historic works by writers of the 2nd and 3rd centuries of the Muslim era (AH – 8th and 9th century CE). These include traditional Muslim biographies of Muhammad, which provide additional information about Muhammad's life. The earliest written ''sira'' (biographies of Muhammad and quotes attributed to him) is Ibn Ishaq's ''Life of God's Messenger'' written c. 767 CE (150 AH). Although the original work was lost, this sira survives as extensive excerpts in works by Ibn Hisham and to a lesser extent by Al-Tabari. However, Ibn Hisham admits in the preface to his biography of Muhammad that he omitted matters from Ibn Ishaq's biography that "would distress certain people". Another early history source is the history of Muhammad's campaigns by al-Waqidi (death 207 of Muslim era), and the work of his secretary Ibn Sa'd al-Baghdadi (death 230 of Muslim era). Many scholars accept these early biographies as authentic, though their accuracy is unascertainable. Recent studies have led scholars to distinguish between traditions touching legal matters and purely historical events. In the legal group, traditions could have been subject to invention while historic events, aside from exceptional cases, may have been only subject to "tendential shaping".

Other important sources include the hadith collections, accounts of the verbal and physical teachings and traditions of Muhammad. Hadiths were compiled several generations after his death by followers including Muhammad al-Bukhari, Muslim ibn al-Hajjaj, Muhammad ibn Isa at-Tirmidhi, Abd ar-Rahman al-Nasai, Abu Dawood, Ibn Majah, Malik ibn Anas, al-Daraqutni. Some Western academics cautiously view the hadith collections as accurate historical sources. Scholars such as Madelung do not reject the narrations which have been compiled in later periods, but judge them in the context of history and on the basis of their compatibility with the events and figures. Muslim scholars on the other hand typically place a greater emphasis on the hadith literature instead of the biographical literature, since hadiths maintain a verifiable chain of transmission (isnad); the lack of such a chain for the biographical literature makes it less verifiable in their eyes.

The Arabian Peninsula was, and still is, largely arid with volcanic soil, making agriculture difficult except near oases or springs. Towns and cities dotted the landscape; two of the most prominent being Mecca and Medina. Medina was a large flourishing agricultural settlement, while Mecca was an important financial center for many surrounding tribes. Communal life was essential for survival in the desert conditions, supporting indigenous tribes against the harsh environment and lifestyle. Tribal affiliation, whether based on kinship or alliances, was an important source of social cohesion. Indigenous Arabs were either nomadic or sedentary. Nomadic groups constantly traveled seeking water and pasture for their flocks, while the sedentary settled and focused on trade and agriculture. Nomadic survival also depended on raiding caravans or oases; nomads did not view this as a crime. In pre-Islamic Arabia, gods or goddesses were viewed as protectors of individual tribes, their spirits being associated with sacred trees, stones, springs and wells. As well as being the site of an annual pilgrimage, the Kaaba shrine in Mecca housed 360 idols of tribal patron deities. Three goddesses were revered as God's daughters: Allāt, Manāt and al-'Uzzá. Monotheistic communities existed in Arabia, including Christians and Jews. Hanifs – native pre-Islamic Arabs who "professed a rigid monotheism" – are also sometimes listed alongside Jews and Christians in pre-Islamic Arabia, although their historicity is disputed among scholars. According to Muslim tradition, Muhammad himself was a Hanif and one of the descendants of Ishmael, son of Abraham. The second half of the sixth century was a period of political disorder in Arabia and communication routes were no longer secure. Religious divisions were an important cause of the crisis. Judaism became the dominant religion in Yemen while Christianity took root in the Persian Gulf area. In line with broader trends of the ancient world, the region witnessed a decline in the practice of polytheistic cults and a growing interest in a more spiritual form of religion. While many were reluctant to convert to a foreign faith, those faiths provided intellectual and spiritual reference points. During the early years of Muhammad's life, the Quraysh tribe to which he belonged became a dominant force in western Arabia. They formed the cult association of ''hums'', which tied members of many tribes in western Arabia to the Kaaba and reinforced the prestige of the Meccan sanctuary. To counter the effects of anarchy, Quraysh upheld the institution of sacred months during which all violence was forbidden, and it was possible to participate in pilgrimages and fairs without danger. Thus, although the association of ''hums'' was primarily religious, it also had important economic consequences for the city.

Abū al-Qāsim Muḥammad ibn ʿAbd Allāh ibn ʿAbd al-Muṭṭalib ibn Hāshim, was born in Mecca about the year 570 and his birthday is believed to be in the month of Rabi' al-awwal. He belonged to the Banu Hashim clan, part of the Quraysh tribe, which was one of Mecca's prominent families, although it appears less prosperous during Muhammad's early lifetime. Tradition places the year of Muhammad's birth as corresponding with the Year of the Elephant, which is named after the failed destruction of Mecca that year by the Abraha, Yemen's king, who supplemented his army with elephants. Alternatively some 20th century scholars have suggested different years, such as 568 or 569. 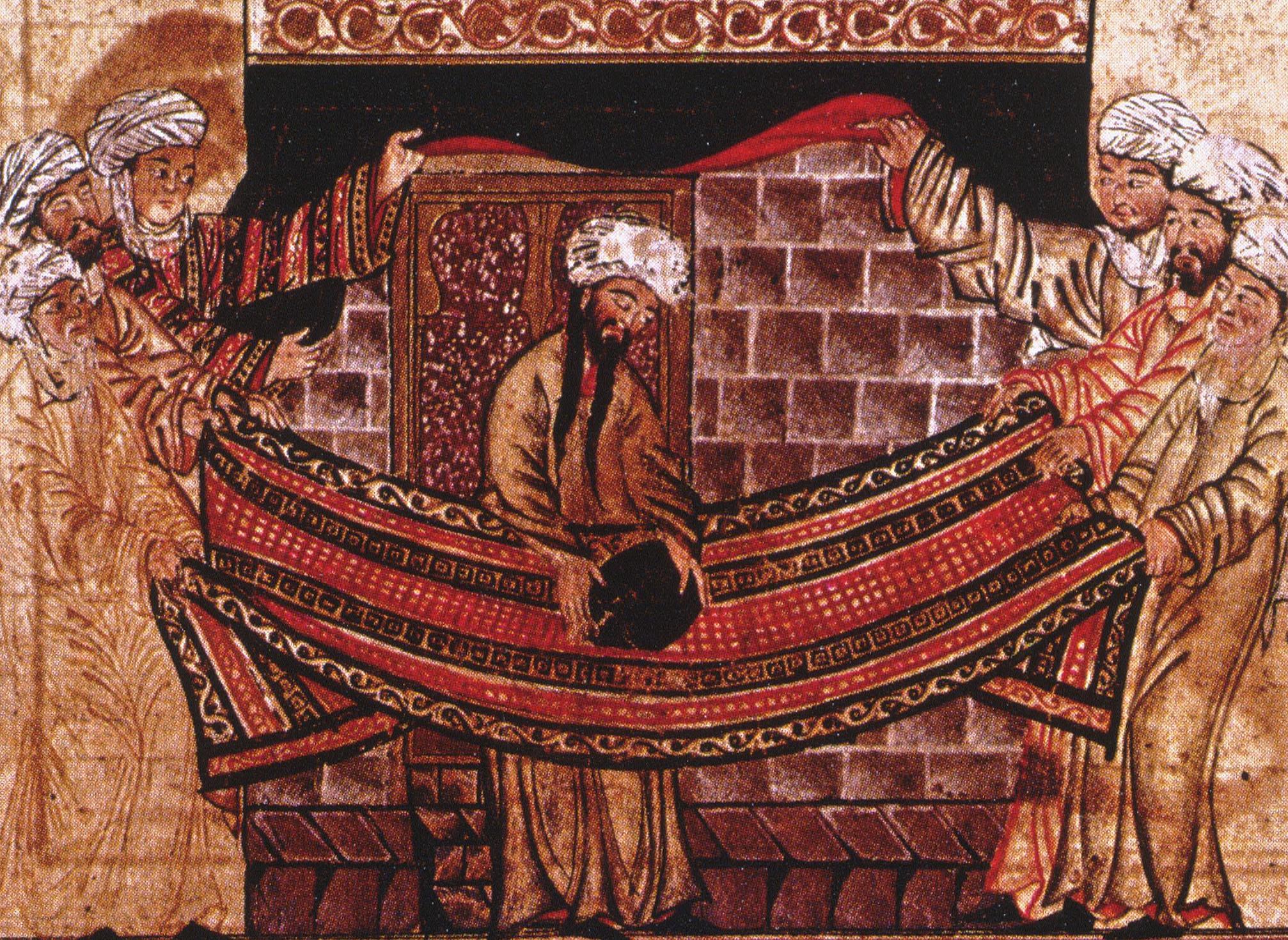 Muhammad's father, Abdullah, died almost six months before he was born. According to Islamic tradition, soon after birth he was sent to live with a Bedouin family in the desert, as desert life was considered healthier for infants; some western scholars reject this tradition's historicity. Muhammad stayed with his foster-mother, Halimah bint Abi Dhuayb, and her husband until he was two years old. At the age of six, Muhammad lost his biological mother Amina to illness and became an orphan.