A molecular model, in this article, is a physical model that represents molecules and their processes. The creation of mathematical models of molecular properties and behaviour is molecular modelling, and their graphical depiction is molecular graphics, but these topics are closely linked and each uses techniques from the others. In this article, "molecular model" will primarily refer to systems containing more than one atom and where nuclear structure is neglected. The electronic structure is often also omitted or represented in a highly sophisticated way.

Physical models of atomistic systems have played an important role in understanding chemistry and generating and testing hypotheses. Most commonly there is an explicit representation of atoms, though other approaches such as soap films and other continuous media have been useful. There are several motivations for creating physical models: * as pedagogic tools for students or those unfamiliar with atomistic structures; * as objects to generate or test theories (e.g., the structure of DNA); * as analogue computers (e.g., for measuring distances and angles in flexible systems); * as aesthetically pleasing objects on the boundary of art and science. The construction of physical models is often a creative act, and many bespoke examples have been carefully created in the workshops of science departments. There is a very wide range of approaches to physical modelling, and this article lists only the most common or historically important. The main strategi, initially in textbooks and research articles and more recently on computers. Molecular graphics has replaced some functions of physical molecular models, but physical kits continue to be very popular and are sold in large numbers. Their unique strengths include: * cheapness and portability; * immediate tactile and visual messages; * easy interactivity for many processes (e.g., conformational analysis and pseudorotation).

In the 1600s, Johannes Kepler speculated on the symmetry of snowflakes and also on the close packing of spherical objects such as fruit (this problem remained unsolved until very recently). The symmetrical arrangement of closely packed spheres informed theories of molecular structure in the late 1800s, and many theories of crystallography and solid state inorganic structure used collections of equal and unequal spheres to simulate packing and predict structure. 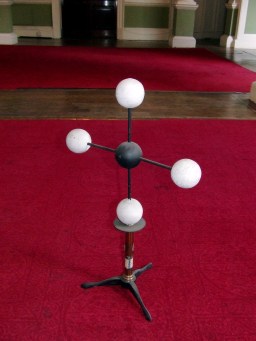 John Dalton represented compounds as aggregations of circular atoms, and although Johann Josef Loschmidt did not create physical models, his diagrams based on circles are two-dimensional analogues of later models. August Wilhelm von Hofmann is credited with the first physical molecular model around 1860 (Fig. 1). Note how the size of the carbon appears smaller than the hydrogen. The importance of stereochemistry was not then recognised and the model is essentially topological (it should be a 3-dimensional tetrahedron). Jacobus Henricus van 't Hoff and Joseph Le Bel introduced the concept of chemistry in space—stereochemistry in three dimensions. van 't Hoff built tetrahedral molecules representing the three-dimensional properties of carbon.


Models based on spheres

Repeating units will help to show how easy it is and clear it is to represent molecules through balls that represent atoms. (NaCl) lattice, showing close-packed spheres representing a face-centered cubic AB lattice similar to that of NaCl and most other alkali halides. In this model the spheres are equal sizes whereas more "realistic" models would have different radii for cations and anions.]] The binary compounds sodium chloride (NaCl) and caesium chloride (CsCl) have cubic structures but have different space groups. This can be rationalised in terms of close packing of spheres of different sizes. For example, NaCl can be described as close-packed chloride ions (in a face-centered cubic lattice) with sodium ions in the octahedral holes. After the development of X-ray crystallography as a tool for determining crystal structures, many laboratories built models based on spheres. With the development of plastic or polystyrene balls it is now easy to create such models.


Models based on ball-and-stick

The concept of the chemical bond as a direct link between atoms can be modelled by linking balls (atoms) with sticks/rods (bonds). This has been extremely popular and is still widely used today. Initially atoms were made of spherical wooden balls with specially drilled holes for rods. Thus carbon can be represented as a sphere with four holes at the tetrahedral angles cos−1(−) ≈ 109.47°. A problem with rigid bonds and holes is that systems with arbitrary angles could not be built. This can be overcome with flexible bonds, originally helical springs but now usually plastic. This also allows double and triple bonds to be approximated by multiple single bonds (Fig. 3). .]] Figure 3 represents a ball-and-stick model of proline. The balls have colours: black represents carbon (C); red, oxygen (O); blue, nitrogen (N); and white, hydrogen (H). Each ball is drilled with as many holes as its conventional valence (C: 4; N: 3; O: 2; H: 1) directed towards the vertices of a tetrahedron. Single bonds are represented by (fairly) rigid grey rods. Double and triple bonds use two longer flexible bonds which restrict rotation and support conventional cis/trans stereochemistry. (Cr-doped corundum) made with acrylic balls and stainless steel rods by Miramodus Ltd..]] However, most molecules require holes at other angles and specialist companies manufacture kits and bespoke models. Besides tetrahedral, trigonal and octahedral holes, there were all-purpose balls with 24 holes. These models allowed rotation about the single rod bonds, which could be both an advantage (showing molecular flexibility) and a disadvantage (models are floppy). The approximate scale was 5 cm per ångström (0.5 m/nm or 500,000,000:1), but was not consistent over all elements. Arnold Beevers in Edinburgh created small models using PMMA balls and stainless steel rods. By using individually drilled balls with precise bond angles and bond lengths in these models, large crystal structures to be accurately created, but with light and rigid form. Figure 4 shows a unit cell of ruby in this style.

Crick and Watson's DNA model and the protein-building kits of Kendrew were among the first skeletal models. These were based on atomic components where the valences were represented by rods; the atoms were points at the intersections. Bonds were created by linking components with tubular connectors with locking screws. André Dreiding introduced a molecular modelling kit in the late 1950s which dispensed with the connectors. A given atom would have solid and hollow valence spikes. The solid rods clicked into the tubes forming a bond, usually with free rotation. These were and are very widely used in organic chemistry departments and were made so accurately that interatomic measurements could be made by ruler. More recently, inexpensive plastic models (such as Orbit) use a similar principle. A small plastic sphere has protuberances onto which plastic tubes can be fitted. The flexibility of the plastic means that distorted geometries can be made.

Many inorganic solids consist of atoms surrounded by a coordination sphere of electronegative atoms (e.g. PO4 tetrahedra, TiO6 octahedra). Structures can be modelled by gluing together polyhedra made of paper or plastic.

A good example of composite models is the Nicholson approach, widely used from the late 1970s for building models of biological macromolecules. The components are primarily amino acids and nucleic acids with preformed residues representing groups of atoms. Many of these atoms are directly moulded into the template, and fit together by pushing plastic stubs into small holes. The plastic grips well and makes bonds difficult to rotate, so that arbitrary torsion angles can be set and retain their value. The conformations of the backbone and side chains are determined by pre-computing the torsion angles and then adjusting the model with a protractor. The plastic is white and can be painted to distinguish between O and N atoms. Hydrogen atoms are normally implicit and modelled by snipping off the spokes. A model of a typical protein with approximately 300 residues could take a month to build. It was common for laboratories to build a model for each protein solved. By 2005, so many protein structures were being determined that relatively few models were made.

With the development of computer-based physical modelling, it is now possible to create complete single-piece models by feeding the coordinates of a surface into the computer. Figure 6 shows models of anthrax toxin, left (at a scale of approximately 20 Å/cm or 1:5,000,000) and green fluorescent protein, right (5 cm high, at a scale of about 4 Å/cm or 1:25,000,000) from 3D Molecular Design. Models are made of plaster or starch, using a rapid prototyping process. It has also recently become possible to create accurate molecular models inside glass blocks using a technique known as subsurface laser engraving. The image at right (Fig. 7) shows the 3D structure of an ''E. coli'' protein (DNA polymerase beta-subunit, PDB code 1MMI) etched inside a block of glass by British company Luminorum Ltd. thumb|Fig. 7. Protein model in glass.

Some of the most common colors used in molecular models are as follows: :

This table is an incomplete chronology of events where physical molecular models provided major scientific insights.

(Some of these have interesting and/or beautiful images) * * *

by Eric Martz and Eric Francoeur. Contains a mixture of physical models and molecular graphics.
Free to use images of molecular models made by Miramodus ltd.