Click Here for Items Related To - Languages of India
Languages spoken in India belong to several language families, the major ones being the Indo-Aryan languages spoken by 78.05% of Indians and the Dravidian languages spoken by 19.64% of Indians. Languages spoken by the remaining 2.31% of the population belong to the Austroasiatic, Sino–Tibetan, Tai–Kadai and a few other minor language families and isolates. India has the world's fourth highest number of languages (447), after Nigeria (524), Indonesia (710) and Papua New Guinea (840). Article 343 of the Indian constitution stated that the official language of the Union is Hindi in Devanagari script instead of the extant English. Later, a constitutional amendment, The Official Languages Act, 1963, allowed for the continuation of English alongside Hindi in the Indian government indefinitely until legislation decides to change it. The form of numerals to be used for the official purposes of the Union are "the international form of Indian numerals", which are referred to as Arabic numerals in most English-speaking countries. Despite the misconceptions, Hindi is not the national language of India; the Constitution of India does not give any language the status of national language. The Eighth Schedule of the Indian Constitution lists 22 languages, which have been referred to as ''scheduled'' languages and given recognition, status and official encouragement. In addition, the Government of India has awarded the distinction of ''classical language'' to Kannada, Malayalam, Odia, Sanskrit, Tamil and Telugu. Classical language status is given to languages which have a rich heritage and independent nature. According to the Census of India of 2001, India has 122 major languages and 1599 other languages. However, figures from other sources vary, primarily due to differences in definition of the terms "language" and "dialect". The 2001 Census recorded 30 languages which were spoken by more than a million native speakers and 122 which were spoken by more than 10,000 people. Two contact languages have played an important role in the history of India: Persian and English. Persian was the court language during the Mughal period in India. It reigned as an administrative language for several centuries until the era of British colonisation. English continues to be an important language in India. It is used in higher education and in some areas of the Indian government. Hindi, the most commonly spoken language in India today, serves as the ''lingua franca'' across much of North and Central India. Bengali is the second most spoken and understood language in the country with a significant amount of speakers in Eastern and North- eastern regions. Marathi is the third most spoken and understood language in the country with a significant amount of speakers in South-Western regions. However, there have been concerns raised with Hindi being imposed in South India, most notably in the states of Tamil Nadu and Karnataka. Maharashtra, West Bengal, Assam, Punjab and other non-Hindi regions have also started to voice concerns about Hindi.

The Southern Indian languages are from the Dravidian family. The Dravidian languages are indigenous to the Indian subcontinent. Proto-Dravidian languages were spoken in India in the 4th millennium BCE and started disintegrating into various branches around 3rd millennium BCE. The Dravidian languages are classified in four groups: North, Central (Kolami–Parji), South-Central (Telugu–Kui), and South Dravidian (Tamil-Kannada). The Northern Indian languages from the Indo-Aryan branch of the Indo-European family evolved from Old Indic by way of the Middle Indic Prakrit languages and Apabhraṃśa of the Middle Ages. The Indo-Aryan languages developed and emerged in three stages — Old Indo-Aryan (1500 BCE to 600 BCE), Middle Indo-Aryan stage (600 BCE and 1000 CE) and New Indo-Aryan (between 1000 CE and 1300 CE). The modern north Indian Indo-Aryan languages all evolved into distinct, recognisable languages in the New Indo-Aryan Age. Persian, or ''Farsi'', was brought into India by the Ghaznavids and other Turko-Afghan dynasties as the court language. Culturally Persianized, they, in combination with the later Mughal dynasty (of Turco-Mongol origin), influenced the art, history and literature of the region for more than 500 years, resulting in the Persianisation of many Indian tongues, mainly lexically. In 1837, the British replaced Persian with English and Hindustani in Perso-Arabic script for administrative purposes and the Hindi movement of the 19th Century replaced Persianised vocabulary with Sanskrit derivations and replaced or supplemented the use of Perso-Arabic script for administrative purposes with Devanagari. Each of the northern Indian languages had different influences. For example, Hindustani was strongly influenced by Sanskrit, Arabic and Persian, leading to the emergence of Modern Standard Hindi and Modern Standard Urdu as registers of the Hindustani language. Bangla on the other hand has retained its Sanskritic roots while heavily expanding its vocabulary with words from Persian, English, French and other foreign languages.

The first official survey of language diversity in the Indian subcontinent was carried out by Sir George Abraham Grierson from 1898 to 1928. Titled the Linguistic Survey of India, it reported a total of 179 languages and 544 dialects. However, the results were skewed due to ambiguities in distinguishing between "dialect" and "language", use of untrained personnel and under-reporting of data from South India, as the former provinces of Burma and Madras, as well as the princely states of Cochin, Hyderabad, Mysore and Travancore were not included in the survey. Different sources give widely differing figures, primarily based on how the terms "language" and "dialect" are defined and grouped. ''Ethnologue'', produced by the Christian evangelist organisation SIL International, lists 461 tongues for India (out of 6,912 worldwide), 447 of which are living, while 14 are extinct. The 447 living languages are further subclassified in ''Ethnologue'' as follows: * Institutional – 63 * Developing – 130 * Vigorous – 187 * In trouble – 54 * Dying – 13 The People's Linguistic Survey of India, a privately owned research institution in India, has recorded over 66 different scripts and more than 780 languages in India during its nationwide survey, which the organisation claims to be the biggest linguistic survey in India. The People of India (POI) project of Anthropological Survey of India reported 325 languages which are used for in-group communication by 5,633 Indian communities.

The Census of India records and publishes data with respect to the number of speakers for languages and dialects, but uses its own unique terminology, distinguishing between ''language'' and ''mother tongue''. The mother tongues are grouped within each language. Many of the mother tongues so defined could be considered a language rather than a dialect by linguistic standards. This is especially so for many mother tongues with tens of millions of speakers that are officially grouped under the language Hindi. ;1951 Census Separate figures for Hindi, Urdu, and Punjabi were not issued, due to the fact the returns were intentionally recorded incorrectly in states such as East Punjab, Himachal Pradesh, Delhi, PEPSU, and Bilaspur. ;1961 Census The 1961 census recognised 1,652 mother tongues spoken by 438,936,918 people, counting all declarations made by any individual at the time when the census was conducted. However, the declaring individuals often mixed names of languages with those of dialects, subdialects and dialect clusters or even castes, professions, religions, localities, regions, countries and nationalities. The list therefore includes languages with barely a few individual speakers as well as 530 unclassified mother tongues and more than 100 idioms that are non-native to India, including linguistically unspecific demonyms such as "African", "Canadian" or "Belgian". ;1991 Census The 1991 census recognises 1,576 classified mother tongues. According to the 1991 census, 22 languages had more than a million native speakers, 50 had more than 100,000 and 114 had more than 10,000 native speakers. The remaining accounted for a total of 566,000 native speakers (out of a total of 838 million Indians in 1991). ;2001 Census As per the census of 2001, there are 1635 rationalised mother tongues, 234 identifiable mother tongues and 22 major languages. Of these, 29 languages have more than a million native speakers, 60 have more than 100,000 and 122 have more than 10,000 native speakers. There are a few languages like Kodava that do not have a script but have a group of native speakers in Coorg (Kodagu). ;2011 Census According to the most recent census of 2011, after thorough linguistic scrutiny, edit and rationalization on 19,569 raw linguistic affiliation, the census recognizes 1369 rationalized mother tongues and 1474 names which were treated as ‘unclassified’ and relegated to ‘other’ mother tongue category. Among, the 1369 rationalized mother tongues which are spoken by 10,000 or more speakers, are further grouped into appropriate set that resulted into total 121 languages. In these 121 languages, 22 are already part of the Eighth Schedule to the Constitution of India and other 99 are termed as "Total of other languages" which is one short as of the other languages recognized in 2001 census.

The following list consist of Indian subcontinent languages' total speakers worldwide in the 2019 edition of ''Ethnologue'', a language reference published by SIL International, which is based in the United States. 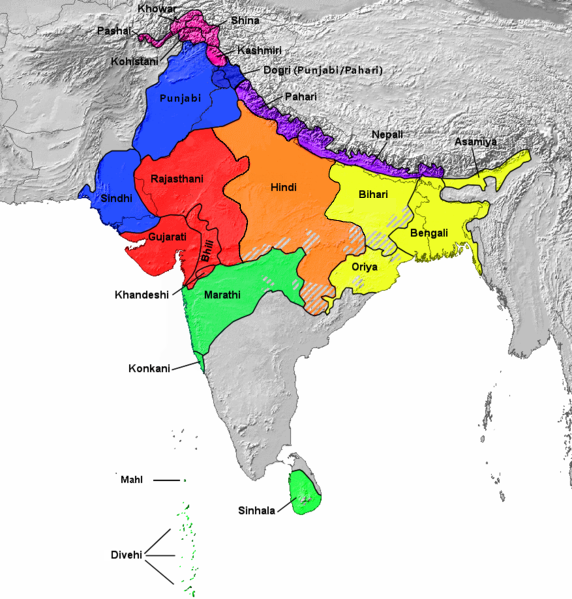 The Tibeto-Burman language family are well represented in India. However, their interrelationships are not discernible, and the family has been described as "a patch of leaves on the forest floor" rather than with the conventional metaphor of a "family tree". Tibeto-Burman languages are spoken across the Himalayas in the regions of Ladakh, Himachal Pradesh, Nepal, Sikkim, Bhutan, Arunachal Pradesh, and also in the Indian states of West Bengal, Assam (hills and autonomous councils), Meghalaya, Nagaland, Manipur, Tripura and Mizoram. Sino-Tibetan languages spoken in India include the scheduled languages Meitei and Bodo, the non-scheduled languages of Karbi, Lepcha, and many varieties of several related Tibetic, West Himalayish, Tani, Brahmaputran, Angami–Pochuri, Tangkhul, Zeme, Kukish language groups, amongst many others.

Ahom language, a Southwestern Tai language, had been once the dominant language of the Ahom Kingdom in modern-day Assam, but was later replaced by the Assamese language (known as Kamrupi in ancient era which is the pre-form of the Kamrupi dialect of today). Nowadays, small Tai communities and their languages remain in Assam and Arunachal Pradesh together with Sino-Tibetans, e.g. Tai Phake, Tai Aiton and Tai Khamti, which are similar to the Shan language of Shan State, Myanmar; the Dai language of Yunnan, China; the Lao language of Laos; the Thai language of Thailand; and the Zhuang language in Guangxi, China.

The only language found in the Indian mainland that is considered a language isolate is Nihali. The status of Nihali is ambiguous, having been considered as a distinct Austroasiatic language, as a dialect of Korku and also as being a "thieves' argot" rather than a legitimate language. The other language isolates found in the rest of South Asia include Burushaski, a language spoken in Gilgit–Baltistan (administered by Pakistan), Kusunda (in western Nepal) and Vedda (in Sri Lanka). The validity of the Great Andamanese language group as a language family has been questioned and it has been considered a language isolate by some authorities. In addition, a Bantu language, Sidi, was spoken until the mid-20th century in Gujarat by the Siddi.

Prior to Independence, in British India, English was the sole language used for administrative purposes as well as for higher education purposes. In 1946, the issue of national language was a bitterly contested subject in the proceedings of the Constituent Assembly of India, specifically what should be the language in which the Constitution of India is written and the language spoken during the proceedings of Parliament and thus deserving of the epithet "national". Members belonging to the northern parts of India insisted that the Constitution be drafted in Hindi with the unofficial translation in English. This was not agreed to by the drafting Committee on the grounds that English was much better to craft the nuanced prose on constitutional subjects. The efforts to make Hindi the pre-eminent language were bitterly resisted by the members from those parts of India where Hindi was not spoken natively. Eventually, a compromise was reached not to include any mention to a national language. Instead, Hindi in Devanagari script was declared to be the official language of the union, but for "fifteen years from the commencement of the Constitution, the English Language shall continue to be used for all the official purposes of the Union for which it was being used immediately before such commencement." Article 343 (1) of the Constitution of India states "The Official Language of the Union government shall be Hindi in Devanagari script."