Click Here for Items Related To - Japanese yen
The is the official currency of Japan. It is the third most traded currency in the foreign exchange market after the United States dollar and the Euro. It is also widely used as a third reserve currency after the U.S. dollar and the Euro. The concept of the yen was a component of the late-19th century Meiji government's modernization program of Japan's economy, which postulated the pursuit of a uniform currency throughout the country, modeled after the European decimal currency system. Before the Meiji Restoration, Japan's feudal fiefs all issued their own money, ''hansatsu'', in an array of incompatible denominations. The New Currency Act of 1871 did away with these and established the yen, which was defined as of gold, or of silver, as the new decimal currency. The former ''han'' (fiefs) became prefectures and their mints private chartered banks, which initially retained the right to print money. To bring an end to this situation, the Bank of Japan was founded in 1882 and given a monopoly on controlling the money supply. Following World War II the yen lost much of its prewar value. To stabilize the Japanese economy the exchange rate of the yen was fixed at ¥360 per US$1 as part of the Bretton Woods system. When that system was abandoned in 1971, the yen became undervalued and was allowed to float. The yen had appreciated to a peak of ¥271 per US$1 in 1973, then underwent periods of depreciation and appreciation due to the 1973 oil crisis, arriving at a value of ¥227 per US$1 by 1980. Since 1973, the Japanese government has maintained a policy of currency intervention, and the yen is therefore under a "dirty float" regime. The Japanese government focused on a competitive export market, and tried to ensure a low exchange rate for the yen through a trade surplus. The Plaza Accord of 1985 temporarily changed this situation: the exchange rate fell from its average of ¥239 per US$1 in 1985 to ¥128 in 1988 and led to a peak rate of ¥80 against the U.S. dollar in 1995, effectively increasing the value of Japan’s GDP in US dollar terms to almost that of the United States. Since that time, however, the world price of the yen has greatly decreased. The Bank of Japan maintains a policy of zero to near-zero interest rates and the Japanese government has previously had a strict anti-inflation policy.

''Yen'' derives from the Japanese word , which borrows its phonetic reading from Chinese yuan, similar to North Korean won and South Korean won. Originally, the Chinese had traded silver in mass called sycees and when Spanish and Mexican silver coins arrived from the Philippines, the Chinese called them "silver rounds" () for their circular shapes. The coins and the name also appeared in Japan. While the Chinese eventually replaced with , the Japanese continued to use the same word, which was given the shinjitai form in reforms at the end of World War II. The spelling and pronunciation "yen" is standard in English because when Japan was first encountered by Europeans around the 16th century, Japanese () and () both had been pronounced and Portuguese missionaries had spelled them "ye". By the middle of the 18th century, and came to be pronounced as in modern Japanese, although some regions retain the pronunciation. Walter Henry Medhurst, who had neither been to Japan nor met any Japanese people, having consulted mainly a Japanese-Dutch dictionary, spelled some "e"s as "ye" in his ''An English and Japanese, and Japanese and English Vocabulary'' (1830). In the early Meiji era, James Curtis Hepburn, following Medhurst, spelled all "e"s as "ye" in his ''A Japanese and English dictionary'' (1867); in Japanese, ''e'' and ''i'' are slightly palatalized, somewhat as in Russian. That was the first full-scale Japanese-English/English-Japanese dictionary, which had a strong influence on Westerners in Japan and probably prompted the spelling "yen". Hepburn revised most "ye"s to "e" in the 3rd edition (1886) to mirror the contemporary pronunciation, except "yen". This was probably already fixed and has remained so ever since.

In the 19th century, silver Spanish dollar coins were common throughout the Far East such as in Southeast Asia, China, and Japan. These coins had been introduced through Manila in the Philippines as part of the Spanish East Indies of the Spanish colonial empire over a period of two hundred and fifty years, arriving on ships known as Manila galleons in the Manila-Acapulco Galleon Trade from Acapulco in the Viceroyalty of New Spain (Mexico). Until the 19th century, these silver dollar coins were actual Spanish silver dollar coins minted in the new world, mostly from Mexico City and mined in the silver mines of Potosí in Bolivia and Peru. But from the 1840s, they were increasingly replaced by silver dollars of the newly independent Latin American republics, such as Mexico. In the later half of the 19th century, some local coins in the region were made in the resemblance of the Mexican peso. The first of these local silver coins was the Hong Kong silver dollar coin that was minted in Hong Kong between 1866 and 1869. The Chinese were slow to accept unfamiliar coinage and preferred the familiar Mexican dollars, and so the Hong Kong government ceased minting these coins and sold the mint machinery to Japan. 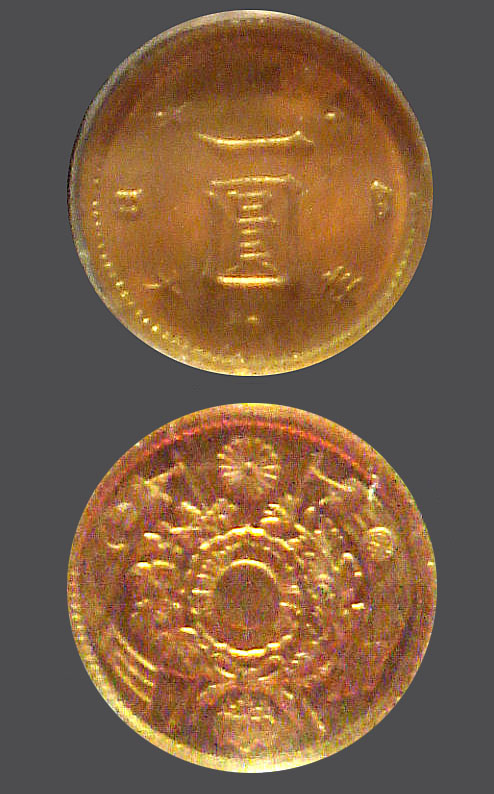 The Japanese then decided to adopt a silver dollar coinage under the name of 'yen', meaning 'a round object'. The yen was officially adopted by the Meiji government in an Act signed on June 27, 1871. The new currency was gradually introduced beginning from July of that year. The yen was therefore basically a dollar unit, like all dollars, descended from the Spanish Pieces of eight, and up until 1873 all the dollars in the world had more or less the same value. The yen replaced Tokugawa coinage, a complex monetary system of the Edo period based on the mon. The ''New Currency Act'' of 1871 stipulated the adoption of the decimal accounting system of ''yen'' (1, ), ' (, ), and ' (, ), with the coins being round and manufactured using Western machinery. The yen was legally defined as 0.78 troy ounces (24.26 g) of pure silver, or 1.5 grams of pure gold (as recommended by the European Congress of Economists in Paris in 1867; the 5-yen coin was equivalent to the Argentine 5 peso fuerte coin