Click Here for Items Related To - Henry IV of France


|house = Bourbon |father = Antoine of Navarre |mother = Jeanne III of Navarre |religion =Protestantism 1553-1595 Roman Catholicism 1595-1610 |signature= Signature of Henry IV of France.svg |succession1 = King of Navarre |reign1 = 9 June 1572 – 14 May 1610 |predecessor1 = Jeanne III |successor1 = Louis II Henry IV (french: Henri IV; 13 December 1553 – 14 May 1610), also known by the epithet Good King Henry or Henry the Great, was King of Navarre (as Henry III) from 1572 and King of France from 1589 to 1610. He was the first monarch of France from the House of Bourbon, a cadet branch of the Capetian dynasty. He was assassinated in 1610 by François Ravaillac, a fanatical Catholic, and was succeeded by his son Louis XIII. The son of Antoine de Bourbon, Duke of Vendôme and Jeanne d'Albret, the Queen of Navarre, Henry was baptised as a Catholic but raised in the Protestant faith by his mother. He inherited the throne of Navarre in 1572 on his mother's death. As a Huguenot, Henry was involved in the French Wars of Religion, barely escaping assassination in the St. Bartholomew's Day massacre. He later led Protestant forces against the royal army. He and his predecessor Henry III of France were direct descendants of Saint-King Louis IX. Henry III belonged to the House of Valois, descended from Philip III of France, elder son of Saint Louis; Henry IV belonged to the House of Bourbon, descended from Robert, Count of Clermont, younger son of Saint Louis. As Head of the House of Bourbon, Henry was "first prince of the blood". Upon the death of his brother-in-law and distant cousin Henry III in 1589, Henry was called to the French succession by the Salic law. He initially kept the Protestant faith (the only French king to do so) and had to fight against the Catholic League, which denied that he could wear France's crown as a Protestant. After four years of stalemate, he converted to Catholicism to obtain mastery over his kingdom (reportedly saying, "Paris is well worth a mass."). As a pragmatic politician (in the parlance of the time, a ''politique''), he displayed an unusual religious tolerance for the era. Notably, he promulgated the Edict of Nantes (1598), which guaranteed religious liberties to Protestants, thereby effectively ending the Wars of Religion. Considered a usurper by some Catholics and a traitor by some Protestants, Henry became the target of at least 12 assassination attempts. Having faced much opposition during his reign, Henry gained more status after his death. He was admired for his repeated victories over his enemies and his conversion to Catholicism. "Good King Henry" (''le bon roi Henri'') was remembered for his geniality and his great concern about the welfare of his subjects. An active ruler, he worked to regularise state finance, promote agriculture, eliminate corruption and encourage education. During his reign, the French colonization of the Americas truly began with the foundation of the colonies of Acadia and Canada at Port-Royal and Quebec, respectively. He was celebrated in the popular song "Vive le roi Henri" (which later became an anthem for the French monarchy during the reigns of his successors) and in Voltaire's ''Henriade''. 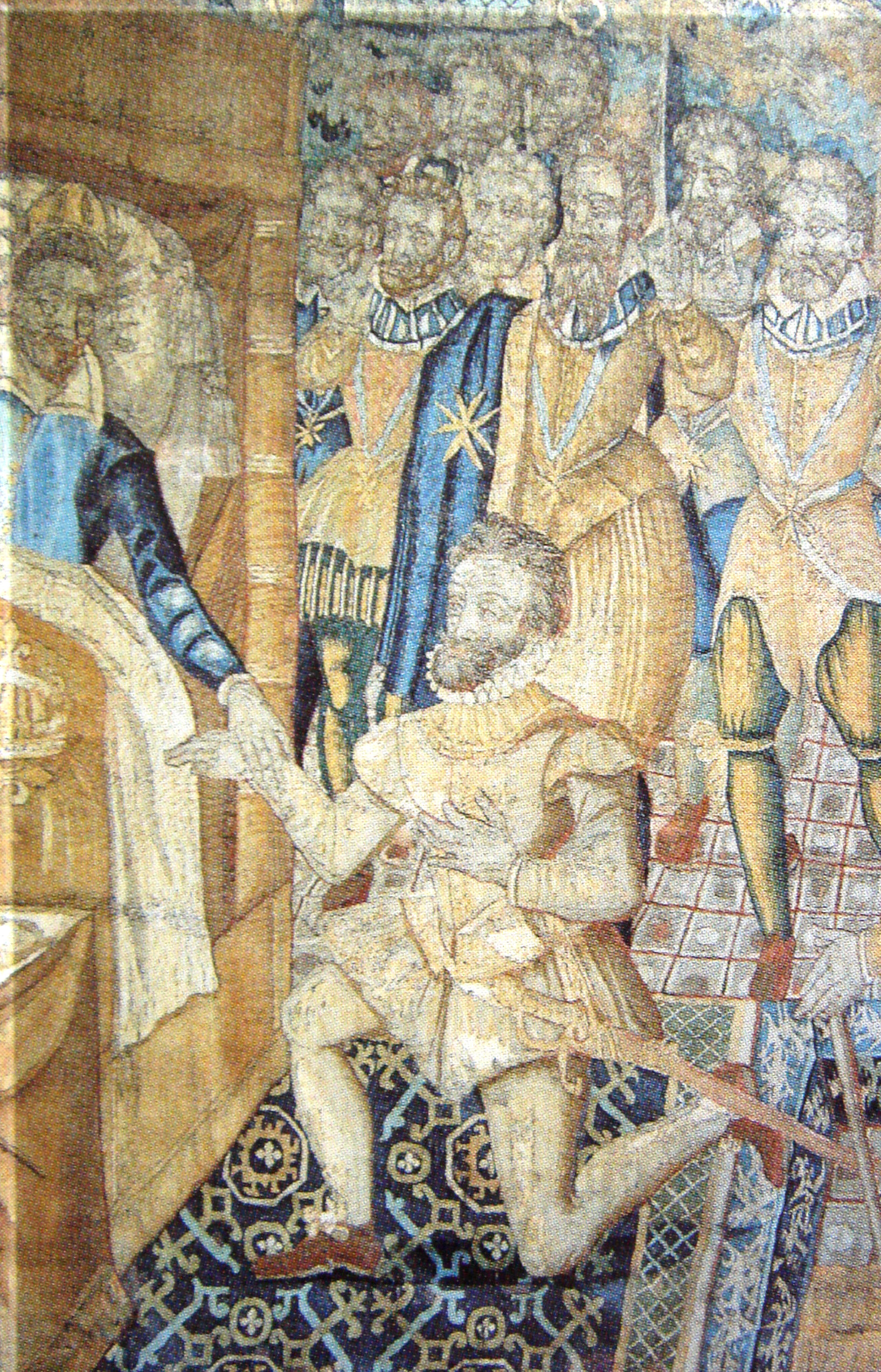 Henry de Bourbon was born in Pau, the capital of the joint Kingdom of Navarre with the sovereign principality of Béarn. His parents were Queen Joan III of Navarre (Jeanne d'Albret) and her consort, Antoine de Bourbon, Duke of Vendôme, King of Navarre. Although baptised as a Catholic, Henry was raised as a Protestant by his mother, who had declared Calvinism the religion of Navarre. As a teenager, Henry joined the Huguenot forces in the French Wars of Religion. On 9 June 1572, upon his mother's death, the 19-year-old became King of Navarre.

At Queen Joan's death, it was arranged for Henry to marry Margaret of Valois, daughter of Henry II of France and Catherine de' Medici. The wedding took place in Paris on 18 August 1572 on the parvis of Notre Dame Cathedral. On 24 August, the St. Bartholomew's Day massacre began in Paris. Several thousand Protestants who had come to Paris for Henry's wedding were killed, as well as thousands more throughout the country in the days that followed. Henry narrowly escaped death thanks to the help of his wife and his promise to convert to Catholicism. He was forced to live at the court of France, but he escaped in early 1576. On 5 February of that year, he formally abjured Catholicism at Tours and rejoined the Protestant forces in the military conflict. He named his 16-year-old sister, Catherine de Bourbon, regent of Béarn. Catherine held the regency for nearly thirty years.

'', by Peter Paul Rubens ]] File:Henry IV en Herculeus terrassant l Hydre de Lerne cad La ligue Catholique Atelier Toussaint Dubreuil circa 1600.jpg|thumb|Henry IV, as [[Hercules, vanquishing the [[Lernaean Hydra]] (i.e. the [[Catholic League (French)|Catholic League]]), by [[Toussaint Dubreuil]], 1600]] Henry became [[heir presumptive]] to the French throne in 1584 upon the death of [[Francis, Duke of Anjou]], brother and heir to the Catholic Henry III of France|Henry III, who had succeeded Charles IX in 1574. Given that Henry of Navarre was the next senior agnatic descendant of King Louis IX, King Henry III had no choice but to recognise him as the legitimate successor. Salic law barred the king's sisters and all others who could claim descent through only the female line from inheriting. Since Henry of Navarre was a Huguenot, the issue was not considered settled in many quarters of the country, and France was plunged into a phase of the Wars of Religion known as the War of the Three Henries. Henry III and Henry of Navarre were two of these Henries. The third was Henry I, Duke of Guise, who pushed for complete suppression of the Huguenots and had much support among Catholic loyalists. Political disagreements among the parties set off a series of campaigns and counter-campaigns that culminated in the Battle of Coutras. In December 1588, Henry III had Henry I of Guise murdered, along with his brother, Louis, Cardinal de Guise. Henry III thought the removal of the brothers would finally restore his authority. However, the populace was horrified and rose against him. The title of the king was no longer recognized in several cities; his power was limited to Blois, Tours, and the surrounding districts. In the general chaos, Henry III relied on King Henry of Navarre and his Huguenots. The two kings were united by a common interest—to win France from the Catholic League. Henry III acknowledged the King of Navarre as a true subject and Frenchman, not a fanatic Huguenot aiming for the destruction of Catholics. Catholic royalist nobles also rallied to the king's standard. With this combined force, the two kings marched to Paris. The morale of the city was low, and even the Spanish ambassador believed the city could not hold out longer than a fortnight. But Henry III was assassinated shortly thereafter, on 2 August 1589, by a fanatical monk. When Henry III died, Henry of Navarre nominally became king of France. The Catholic League, however, strengthened by support from outside the country—especially from Spain—was strong enough to prevent a universal recognition of his new title. The Pope excommunicated Henry and declared him devoid of any right to inherit the crown. Most of the Catholic nobles who had joined Henry III for the siege of Paris also refused to recognize the claim of Henry of Navarre, and abandoned him. He set about winning his kingdom by military conquest, aided by English money and German troops. Henry's Catholic uncle Charles, Cardinal de Bourbon was proclaimed king by the League, but the Cardinal was Henry's prisoner at the time. Henry was victorious at the Battle of Arques and the Battle of Ivry, but failed to take Paris after besieging it in 1590. When Cardinal de Bourbon died in 1590, the League could not agree on a new candidate. While some supported various Guise candidates, the strongest candidate was probably the Infanta Isabella Clara Eugenia of Spain, the daughter of Philip II of Spain, whose mother Elisabeth had been the eldest daughter of Henry II of France. In the religious fervor of the time, the Infanta was recognized to be a suitable candidate, provided that she marry a suitable husband. The French overwhelmingly rejected Philip's first choice, Archduke Ernest of Austria, the Emperor's brother, also a member of the House of Habsburg. In case of such opposition, Philip indicated that princes of the House of Lorraine would be acceptable to him: the Duke of Guise; a son of the Duke of Lorraine; and the son of the Duke of Mayenne. The Spanish ambassadors selected the Duke of Guise, to the joy of the League. However, at that moment of seeming victory, the envy of the Duke of Mayenne was aroused, and he blocked the proposed election of a king.

The Parlement of Paris also upheld the Salic law. They argued that if the French accepted natural hereditary succession, as proposed by the Spaniards, and accepted a woman as their queen, then the ancient claims of the English kings would be confirmed, and the monarchy of centuries past would be nothing but an illegality. The Parlement admonished Mayenne, as Lieutenant-General, that the Kings of France had resisted the interference of the Pope in political matters, and that he should not raise a foreign prince or princess to the throne of France under the pretext of religion. Mayenne was angered that he had not been consulted prior to this admonishment, but yielded, since their aim was not contrary to his present views. Despite these setbacks for the League, Henry remained unable to take control of Paris.

"Paris is well worth a Mass"

On 25 July 1593, with the encouragement of his great love, , Henry permanently renounced Protestantism and converted to Catholicism — in order to secure his hold on the French crown, thereby earning the resentment of the Huguenots and his former ally Queen Elizabeth I of England. He was said to have declared that ("Paris is well worth a mass"),