Click Here for Items Related To - Going My Way
''Going My Way'' is a 1944 American musical comedy-drama film directed by Leo McCarey and starring Bing Crosby and Barry Fitzgerald. Written by Frank Butler and Frank Cavett based on a story by McCarey. The film is about a new young priest taking over a parish from an established old veteran. Crosby sings five songs with other songs performed onscreen by Metropolitan Opera's star mezzo-soprano Risë Stevens and Robert Mitchell Boys Choir. ''Going My Way'' was followed the next year by a sequel, ''The Bells of St. Mary's''. ''Going My Way'' was the highest-grossing picture of 1944, and was nominated for ten Academy Awards, winning seven, including Best Picture. Its success helped to make movie exhibitors choose Crosby as the biggest box-office draw of the year, a record he would hold for the remainder of the 1940s. After World War II, Crosby and McCarey presented a copy of the film to Pope Pius XII at the Vatican.

Father Charles “Chuck” O’Malley, an incoming priest from East St. Louis, is transferred to St. Dominic's Church in New York City. On his first day, his unconventional style gets him into a series of mishaps; his informal appearance and attitude make a poor impression with the elder pastor, Father Fitzgibbon. The very traditional Fitzgibbon is further put off by O’Malley's recreational habits – particularly his golf-playing – and his friendship with the even more casual Father Timmy O’Dowd. O'Malley privately informs O'Dowd that he was sent by the bishop to take charge of the affairs of the parish, but that Fitzgibbon is to remain as pastor. To spare Fitzgibbon's feelings, O’Malley acts as if he is simply an assistant. The difference between O’Malley and Fitzgibbon's styles is openly apparent as they deal with events like a parishioner being evicted and a young woman named Carol James having run away from home. The most consequential difference arises in their handling of the youth of the church, many of whom are consistently getting into trouble with the law in a gang led by Tony Scaponi. Fitzgibbon is inclined to look the other way, siding with the boys because of their frequent church attendance. O’Malley seeks to make inroads into the boys’ lives, befriending Scaponi and eventually convincing the boys to become a church choir. The noise of the practicing choir annoys Fitzgibbon, who goes to the bishop and asks for O’Malley to be transferred away. In the course of the conversation, Fitzgibbon infers the bishop's intention to put O’Malley in charge of the parish. To avoid an uncomfortable situation, Fitzgibbon asks the bishop to put O’Malley in charge, and then, resigned to his fate, he informs O’Malley of his new role. A distressed Fitzgibbon runs away, returning late that night. O’Malley puts the older priest to bed, and the two begin to bond. They discuss Fitzgibbon's long-put-off desire to go to Ireland and see his mother, now over 90 years old. O’Malley puts Fitzgibbon to sleep with an Irish lullaby, “Too Ra Loo Ra Loo Ral”. O'Malley runs into Jenny Tuffel, an old girlfriend whom he left to join the priesthood. Jenny now has a successful career with the Metropolitan Opera, performing under the stage name Genevieve Linden. As she prepares to go onstage as the lead in a performance of ''Carmen'', the two discuss their past, and she learns that her world travels with a previous opera company caused her to miss his letter explaining he had entered the priesthood. O'Malley next pays a visit to Carol, who is now suspected of living in sin with Ted Haines Jr., the son of the church's mortgage-holder. O’Malley describes to the young couple his calling in life to “go his way,” which to him means to follow the joyous side of religion and lead others to do the same. He sings them the song “Going My Way,” which he wrote on this theme. Jenny visits O’Malley at the church, sees the boys’ choir, and reads the sheet music of “Going My Way.” She, O'Malley, and O’Dowd devise a plan to rent out the Metropolitan, have the choir perform it with a full orchestra, then sell the rights to the song, saving the church from its financial woes. When the music executive brought on to hear the song does not believe it will sell, the choir decides to make the most of its opportunity on the grand stage, and sings "Swinging on a Star". The executive overhears and decides to buy it, providing enough money to pay off the church mortgage. With everything settled, O'Malley is transferred to a new assignment; O’Dowd will be Fitzgibbon's new assistant, with Tony Scaponi in charge of the choir. However, the church is damaged in a massive fire. On Christmas Eve, parishioners gather in a temporary church for a mass that also serves as O'Malley's farewell. As a going-away present, O’Malley has sent for Fitzgibbon's mother from Ireland. As mother and son embrace for the first time in 45 years, the choir sings “Too-ra-loo-ra-loo-ral”, as Father O’Malley quietly slips away into the night.

According to Bosley Crowther in ''The New York Times'', ''Going My Way'' was "the best" of Crosby's career, which is "saying a lot for a performer who has been one of the steadiest joys of the screen. But, in this Leo McCarey film,… he has definitely found his sturdiest role to date." Crowther, however, criticized the film's length while lauding Crosby, and wrote that "he has been stunningly supported by Barry Fitzgerald, who plays one of the warmest characters the screen has ever known. As a matter of fact, it is a cruel slight to suggest that this is Mr. Crosby's show. It is his and Mr. Fitzgerald's together. And they make it one of the rare delights of the year." ''Variety'' liked the film, saying: "Bing Crosby gets a tailor-made role in ''Going My Way'', and with major assistance from Barry Fitzgerald and Rise Stevens, clicks solidly to provide top-notch entertainment for wide audience appeal. Picture will hit hefty biz on all booking… Intimate scenes between Crosby and Fitzgerald dominate throughout, with both providing slick characterizations… Crosby’s song numbers include three new tunes by Johnny Burke and James Van Heusen — ‘Going My Way,’ ‘Would You Like to Swing on a Star’ and ‘Day After Forever.’ Trio are topgrade and due for wide pop appeal due to cinch recording and airings by Bing. He also delivers ‘Ave Maria,’ ‘Adeste Fideles’ and ‘Silent Night’ in addition to a lively Irish-themed song, "Toora-loora-looral" with boys’ choir accompaniment."

At the 17th Academy Awards, ''Going My Way'' was nominated for ten Academy Awards, including two for Barry Fitzgerald, whose work on the film was nominated for both Best Actor and Best Supporting Actor. It won for Best Picture, with Crosby winning for Best Actor and Fitzgerald for Best Supporting Actor. (Subsequently, the rules were changed to prevent a recurrence.) It won seven, including Best Picture. In 2004, ''Going My Way'' was selected for preservation in the United States National Film Registry by the Library of Congress as being "culturally, historically, or aesthetically significant". 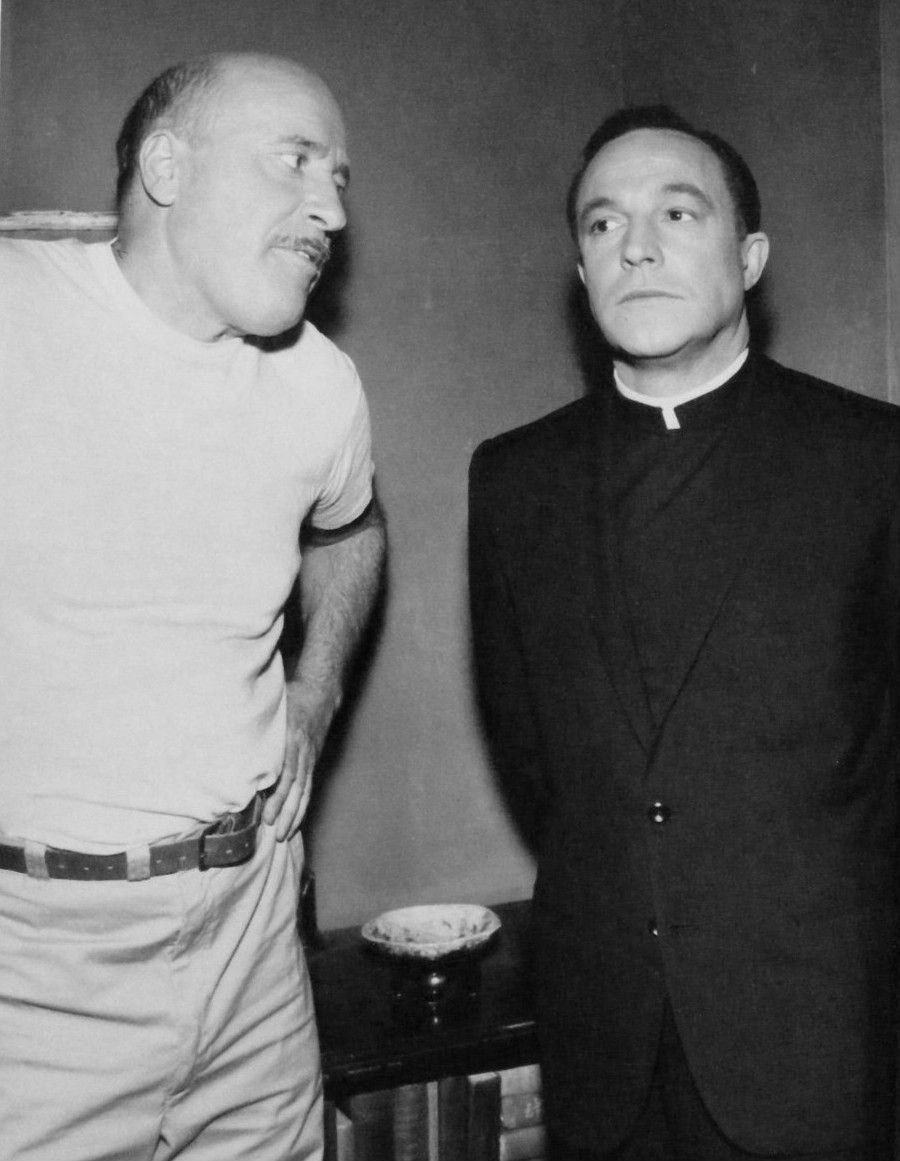 ''Going My Way'' was adapted as a radio play for the January 8, 1945, broadcast of ''The Screen Guild Theater'' starring Bing Crosby, Barry Fitzgerald and Paul Lukas. It was also adapted for the May 3, 1954, broadcast of ''Lux Radio Theatre'' with Barry Fitzgerald. The film also inspired an hour-long comedy-drama of the same name during the 1962–63 television season starring Gene Kelly in the role of Father O'Malley. The series ran on ABC for one season of 30 episodes.