The Fairey Gannet is a British carrier-borne aircraft of the post-Second World War era. It was developed for the Royal Navy's Fleet Air Arm (FAA) by the Fairey Aviation Company. It was a mid-wing monoplane with a tricycle undercarriage and a crew of three, with a double turboprop engine driving two contra-rotating propellers. The Gannet was originally developed to meet the FAA's dual-role anti-submarine warfare and strike requirement. It was later adapted for operations as an electronic countermeasures and carrier onboard delivery aircraft. The Gannet AEW.3 was a variant of the aircraft developed as a carrier-based airborne early warning platform.

The Gannet was built in response to the 1945 Admiralty requirement GR.17/45, for which prototypes by Fairey (Type Q or Fairey 17, after the requirement) and Blackburn Aircraft (the Blackburn B-54 / B-88) were built. After considering and discounting the Rolls-Royce Tweed turboprop, Fairey selected an engine based on the Armstrong Siddeley Mamba turboprop: the Double Mamba (or "Twin Mamba"), two Mambas mounted side-by-side and coupled through a common gearbox to coaxial contra-rotating propellers. Each engine drove its own propeller, and power was transmitted by a torsion shaft which was engaged through a series of sun, planet, epicyclic and spur gears to give a suitable reduction ratio and correct propeller-shaft rotation. The ASMD.1 engine (2,950 hp/2,200 kW) was used in the Gannet AS.1; ASMD.3 (3,145 hp/2,345 kW) in the AS.4; and ASMD.4 (3,875 hp/2,889 kW) in the AEW.3 variant. The Double Mamba engine could be run with one Mamba stopped and its propeller feathered, to conserve fuel and extend endurance when cruising. Stopping one engine on a conventional twin-engined plane would normally create thrust asymmetry, whereas the centerline-mounted propeller arrangement avoided this. The Mamba exhausts were situated on each side of the fuselage, at the root of the wing trailing edge. The gas-turbine engine could run on kerosene, "wide-cut" turbine fuel or diesel fuel, allowing the Admiralty to eliminate the dangerous high-octane petroleum spirit required to operate piston-engined aircraft from carriers. In 1958 the Gannet was selected to replace the Douglas Skyraider in the AEW role. In order to accommodate the systems required, the Gannet underwent a significant redesign that saw a new version of the Double Mamba installed, new radome mounted under the aircraft, the tailfin increased in area, the undercarriage lengthened and the weapons bay removed. A total of 44 aircraft (plus a single prototype) of the AEW.3 version were produced.

The pilot was seated well forward, conferring a good view over the nose for carrier operations, and sat over the Double Mamba engine, directly behind the gearbox and propellers. The second crew member, an aerial observer, was seated under a separate canopy directly behind the pilot. After the prototype, a second observer was included, in his own cockpit over the wing trailing edge. This addition disturbed the airflow over the horizontal stabiliser, requiring small finlets on either side. The Gannet had a large internal weapons bay in the fuselage and a retractable radome under the rear fuselage. The Gannet's wing folded in two places to form a distinctive Z-shape on each side. The first fold was upward, at about a third of the wing span where the inboard anhedral (down-sweep) changed to the outboard dihedral (up-sweep) of the wing (described as an inverted gull wing). The second wing fold was downward, at about two-thirds of the wing span. The length of the nosewheel shock absorber caused the Gannet to have a distinctive nose-high attitude, a common characteristic of carrier aircraft. In FAA service, the Gannet generally wore the standard camouflage scheme of a Sky (duck-egg blue) underside and fuselage sides, with Extra Dark Sea Grey upper surfaces, the fuselage demarcation line running from the nose behind the propeller spinner in a straight line to then curve and join the line of the fin. Code numbers were typically painted on the side of the fuselage ahead of the wing; roundel and serial markings were behind the wing. The T.2 and T.5 trainers were finished in silver overall, with a yellow "Trainer band" on rear fuselage and wings.

The prototype first flew on 19 September 1949 and made the first deck landing by a turboprop aircraft, on on 19 June 1950, by pilot Lieutenant Commander G. Callingham. After a further change in operational requirements, with the addition of a radar and extra crew member, the type entered production in 1953 and initial deliveries were made of the variant designated AS.1 at RNAS Ford in April 1954. A trainer variant (T.2) WN365 first flew in August 1954. The RN's first operational Gannet squadron (826 NAS) was embarked on . The initial order was for 100 AS.1 aircraft. A total of 348 Gannets were built, of which 44 were the redesigned AEW.3. (It was originally intended to be the same basic configuration with the guppy radome replacing the bomb bay and retractable radome. The specification was changed, moving the crewmen's positions to be like those in the Skyraider which necessitated a complete redesign of the fuselage and wing centre section.) Production was shared between Fairey's factories at Hayes, Middlesex and Heaton Chapel, Stockport / Manchester (Ringway) Airport. 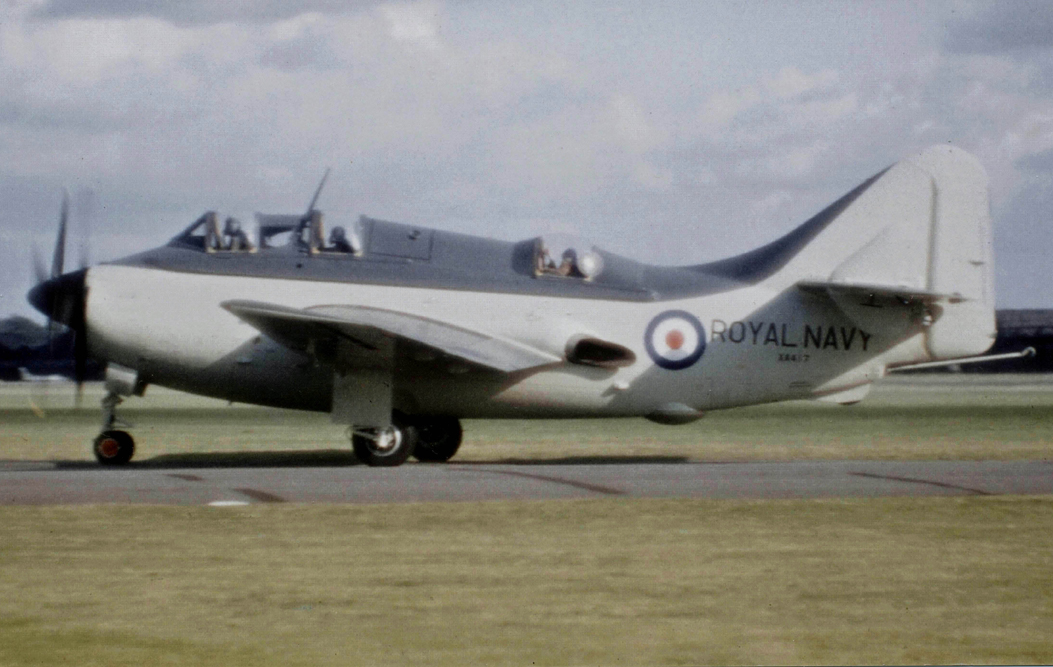 By the mid-1960s, the AS.1s and AS.4s had been replaced by the Westland Whirlwind HAS.7 helicopters. Gannets continued as Electronic countermeasures aircraft: the ECM.6. Some AS.4s were converted to COD.4s for Carrier onboard delivery—the aerial supply of mail and light cargo to the fleet. The Royal Australian Navy purchased the Gannet AS.1 (36 aircraft). It operated from the aircraft carrier and the shore base near Nowra, New South Wales. Indonesia bought a number of AS.4 and T.5s (re-modelled from RN AS.1s and T.2s) in 1959. Some Gannets were later acquired by various other countries. West Germany bought 15 Gannet AS.4s and one T.5 in 1958. They operated as the anti-submarine squadron of ''Marinefliegergeschwader'' 2 (2nd Naval Aviation Wing) from Jagel and Sylt. In 1963 the squadron was reassigned to MFG 3 at Nordholz Naval Airbase until the Gannets were replaced by the Breguet Br.1150 Atlantic in 1966.

*21 November 1958 – Fairey Gannet AS.1, WN345, suffered a belly landing during a test programme, caused by a partially retracted nosewheel. The pilot tried unsuccessfully to get the gear to deploy. He landed gear-up on a foam-covered runway at RAF Bitteswell, suffering minimal damage. After repair, the Gannet was back in the air within weeks. *30 January 1959 - A Royal Australian Navy Gannet on a trip from Bankstown to Nowra broke up in mid-flight over the Sydney suburb of Sylvania, killing pilot Lieutenant PJ Arnold. *29 July 1959 – Royal Navy Fairey Gannet AS.4, XA465, could not lower the undercarriage, made a power-on deck belly landing into the crash barrier on HMS ''Centaur''. The crew was uninjured but the airframe was written off, salvaged in Singapore, but ending up at the fire dump of Singapore Naval Base. *23 January 1964 – Royal Navy Fairey Gannet ECM.6 XG832 suffered double engine failure caused by a phosphor bronze bushing on the idler gear of the port engine's primary accessory drive failing. Fine metal particles from the gear were carried away by the shared oil system of the two engines, causing both to be destroyed. All three crew bailed out near St Austell and survived. *12 May 1966 – German Navy AS.4 UA-115 crashed shortly after takeoff from Kaufbeuren, killing all three crew members. The crash was deemed the result of pilot error.

Tests on the harness restraint system in the Gannet were carried out after a midflight failure due to the release cables binding. The accident was the result of an unrelated engine failure, but the primary issue was the failure of the harness quick-release mechanism. A brief report in ''Cockpit'', Q4 1973, concerning the accident: 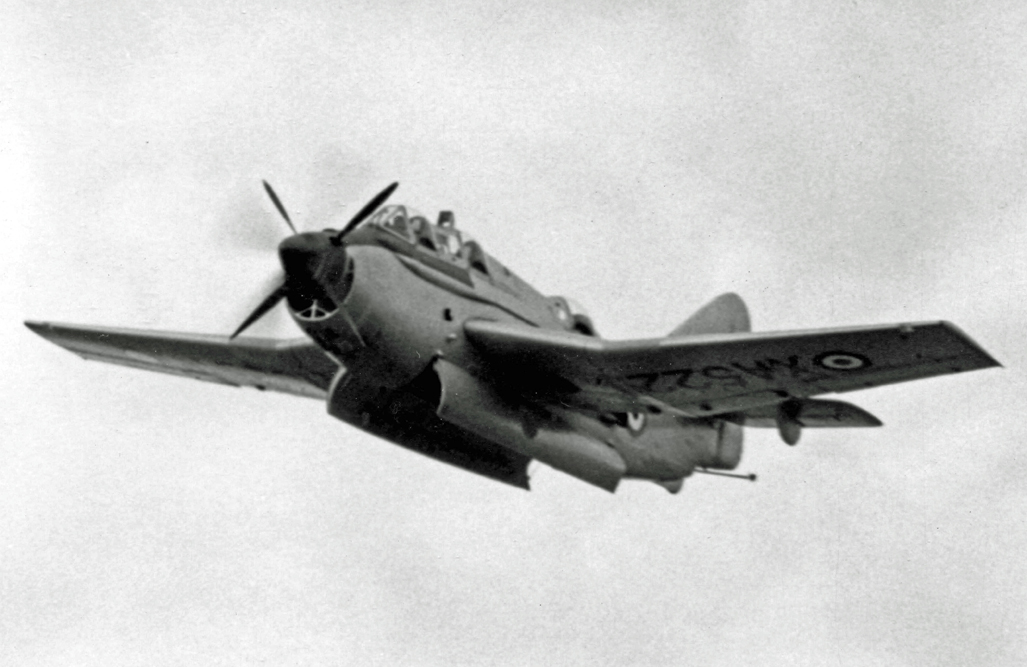 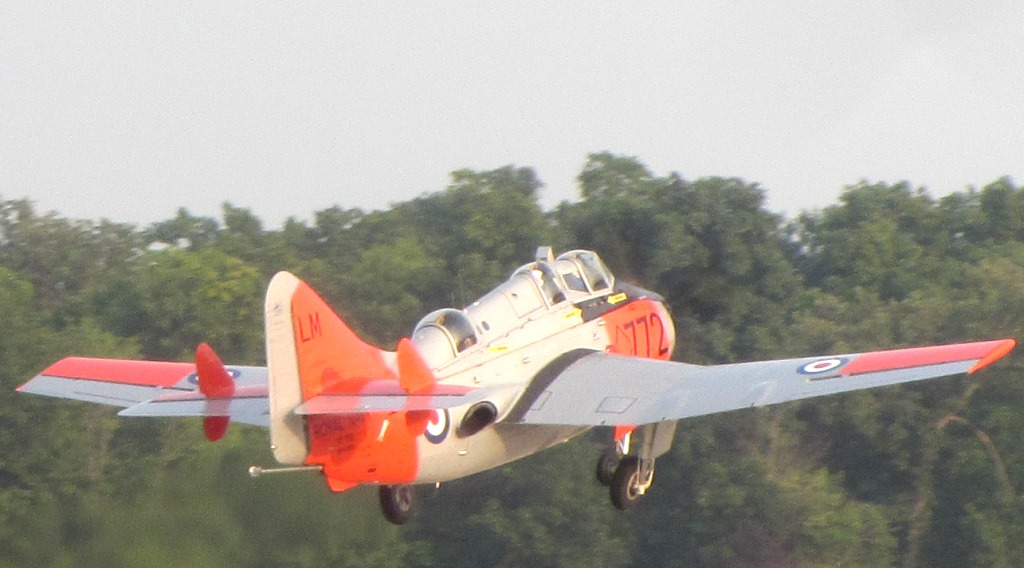