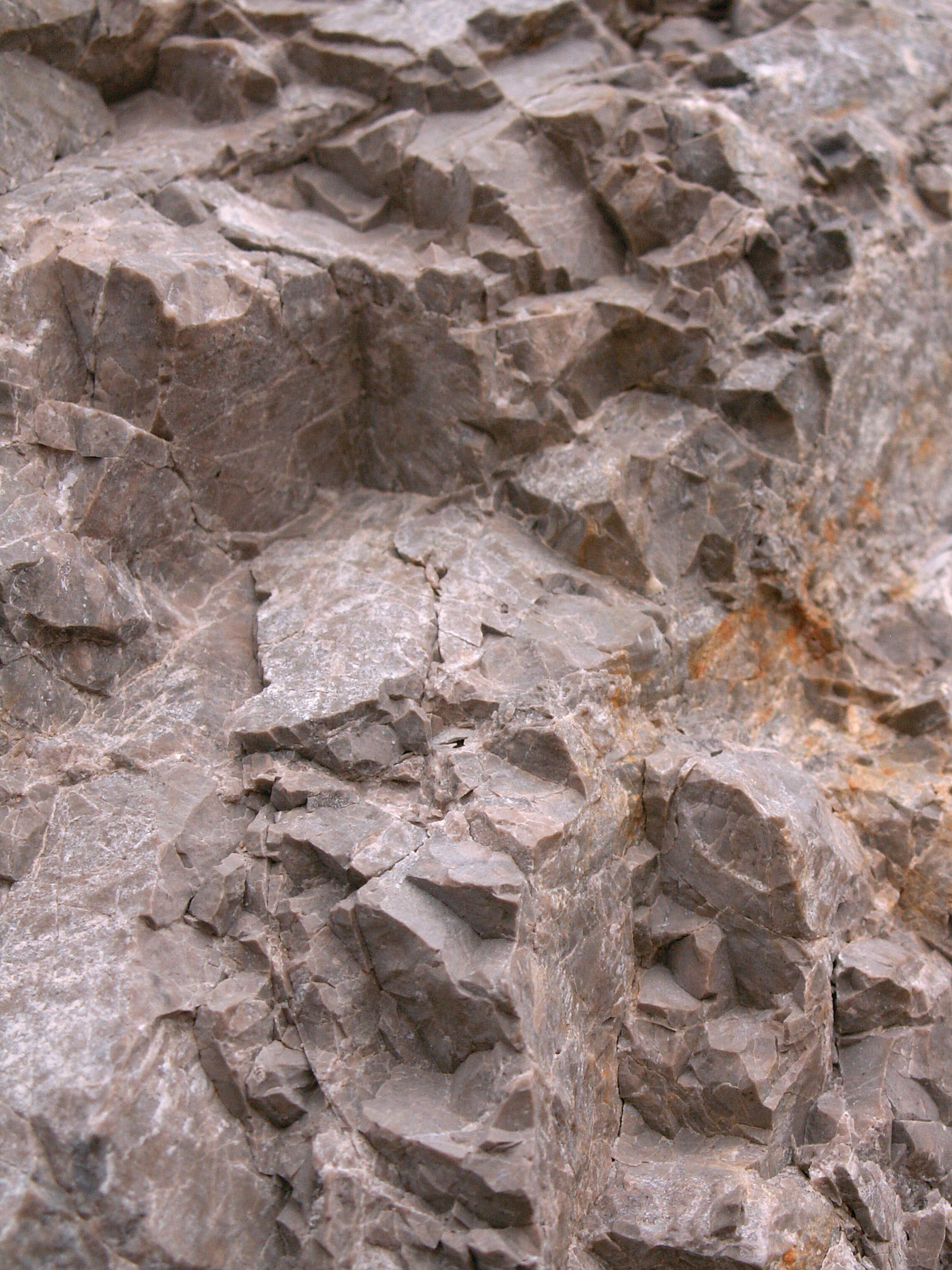 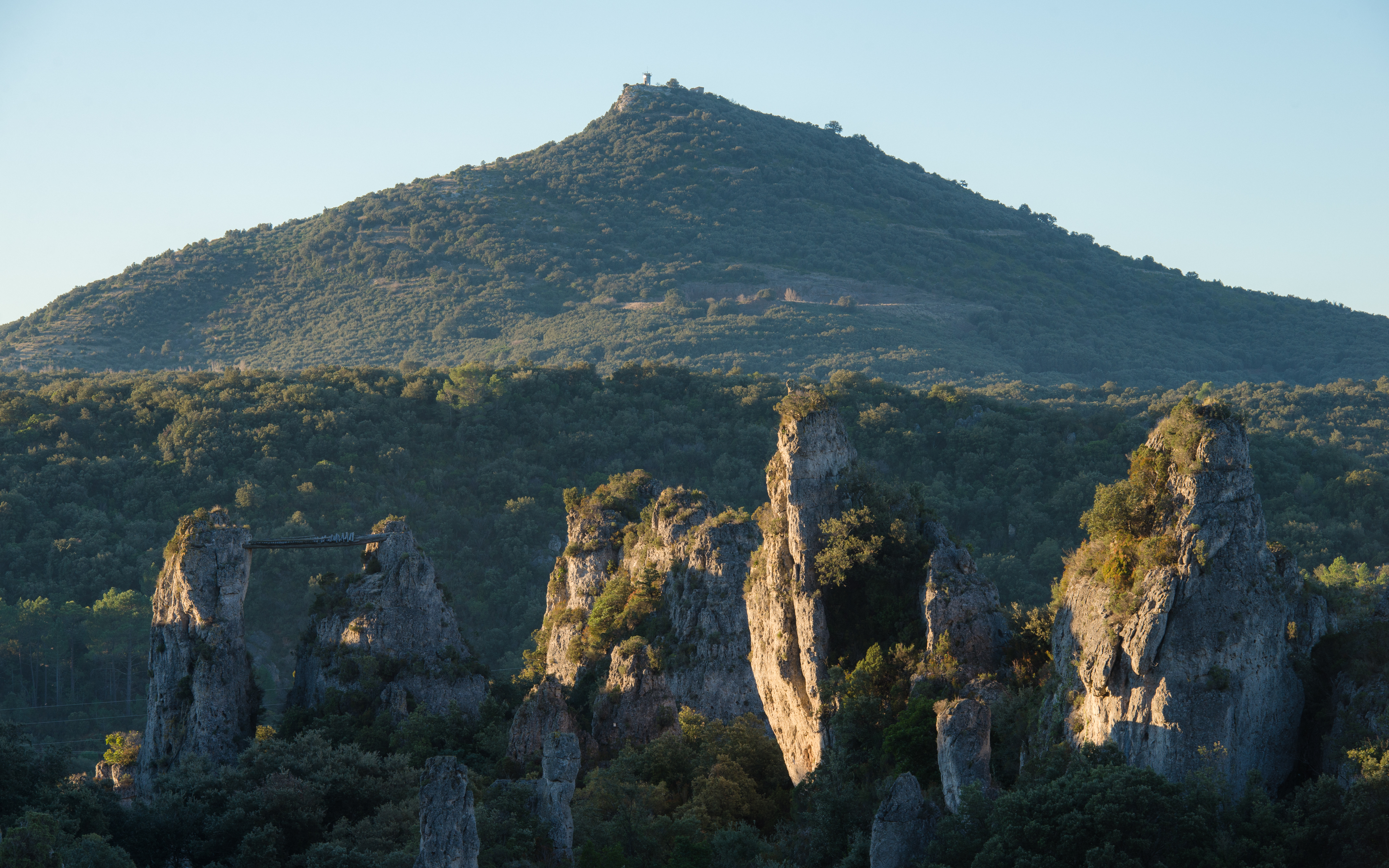 Dolomite (also known as dolomite rock, dolostone or dolomitic rock) is a sedimentary rock, sedimentary carbonate rock that contains a high percentage of the mineral Dolomite (mineral), dolomite, CaMg(CO3)2. In old USGS publications, it was referred to as ''magnesian limestone'', a term now reserved for magnesium-deficient dolomites or magnesium-rich limestones. Dolomite has a stoichiometric ratio of nearly equal amounts of magnesium and calcium. Most dolomite rock formed as a magnesium replacement of limestone or Lime (mineral), lime mud before lithification. Dolomite rock is resistant to erosion and can either contain Bed (geology), bedded layers or be unbedded. It is less soluble than limestone in weakly acidic groundwater, but it can still develop solution features (karst) over time. Dolomite rock can act as an oil and natural gas reservoir. The term ''dolostone'' was introduced in 1948 to avoid confusion with the mineral ''dolomite''. The usage of the term ''dolostone'' is controversial because the name ''dolomite'' was first applied to the rock during the late 18th century and thus has technical precedence. The use of the term ''dolostone'' was not recommended by the ''Glossary of Geology'' published by the American Geological Institute. The geological process of conversion of calcite to dolomite is known as dolomitization and any intermediate product is known as dolomitic limestone. The "dolomite problem" refers to the vast worldwide depositions of dolomite in the past geologic record eluding a unified explanation for their formation. The first geologist to distinguish dolomite rock from limestone was Belsazar Hacquet in 1778.

As with limestone caves, natural caves and solution tubes typically form in dolomite rock as a result of the Dissolution (chemistry), dissolution by weak carbonic acid. Caves can also, less commonly, form through dissolution of rock by sulfuric acid. Calcium carbonate speleothems (secondary deposits) in the forms of stalactites, stalagmites, flowstone etc., can also form in caves within dolomite rock. “Dolomite is a common rock type, but a relatively uncommon mineral in speleothems”. Both the 'Union Internationale de Spéléologie' (UIS) and the American 'National Speleological Society' (NSS), extensively use in their publications, the terms "dolomite" or "dolomite rock" when referring to the natural bedrock containing a high percentage of CaMg(CO3)2 in which natural caves or solution tubes have formed.

Both calcium and magnesium go into solution when dolomite rock is dissolved. The speleothem precipitation sequence is: calcite, Mg-calcite, aragonite, huntite and hydromagnesite. Hence, the most common speleothem (secondary deposit) in caves within dolomite rock karst, is calcium carbonate in the most stable Polymorphism (materials science), polymorph form of calcite. Speleothem types known to have a dolomite constituent include: coatings, crusts, moonmilk, flowstone, coralloids, powder, spar and rafts. Although there are reports of dolomite speleothems known to exist in a number of caves around the world, they are usually in relatively small quantities and form in very fine-grained deposits.

Already studied by Bischoff (1968), magnesium ion is a long known reaction inhibitor, inhibitor of calcite nucleation and crystal growth. The cation is the second-most abundant cation present in seawater after , as is the second anion after . Although closely resembling , the ionic radius of the naked cation is smaller. Some paradoxical consequences arise between its contrasted electrostatic behavior in the mineral solid phase and in aqueous solution. The smaller magnesium ion presents a higher ionic potential than the larger calcium ion. The ionic potential is the ratio of the electric charge to the ionic radius. This ratio represents the charge density at the surface of a given ion. Denser the charge density, stronger the ionic bond, bond that the ion forms. As ionic potential is greater than this of , it exerts a greater Coulomb interaction with its neighboring anions in the solid phase, or with water molecules in solution. As a consequence, the lattice energy of magnesite () is higher than that of calcite () and therefore the solubility of is lower than that of because it requires more energy to separate the ions of opposite charge present in the crystal lattice. Similarly, in aqueous solution, the intermolecular forces (IMF) due to the ion-dipole interactions between and the immediately surrounding molecules are also stronger than for . The ion is hexahydrated in aqueous solution and presents an Octahedron#Octahedra_in_nature, octahedral configuration. The species has a much larger hydrated ionic radius than the naked ions and sorption, sorbs onto the negatively charged surface of calcite. Because of the larger ion-ion distance imposed by this larger hydrated ionic radius, the Coulomb interactions with anions present both in the crystal lattice of the solid calcite and in aqueous solution are weaker. Further calcite crystal growth first requires the dehydration of this species, which is an energetically unfavorable process. This explains why the cation can act as an inhibitor of calcite crystal growth if present at sufficiently high concentration in aqueous solution. The same effect of crystal growth inhibition is also observed with the cation whose ionic radius is similar to this of . When the cation is incorporated at low concentration in the crystal lattice of calcite in chemical equilibrium with seawater, it also stabilizes the F-center, electron-hole centers observable in electron spin resonance (ESR) spectrometry (characteristic ESR line at g = 2.0006 – 2.0007) as evidenced by Barabas ''et al.'' (1988, 1992) and others when attempting to unravel the nature of the paramagnetic centers used to date corals and foraminifera in deep sea sediments.