Decius, also known as Trajan Decius ( la|Gaius Messius Quintus Traianus Decius; c. 201June 251), was Roman emperor from 249 to 251. A distinguished politician during the reign of Philip the Arab, Decius was proclaimed emperor by his troops after putting down a rebellion in Moesia. In 249, he defeated and killed Philip near Verona and was recognized as emperor by the Senate afterwards. During his reign, he attempted to strengthen the Roman state and its religion, leading to the Decian persecution, where a number of prominent Christians (including Pope Fabian) were put to death. In the last year of his reign, Decius co-ruled with his son Herennius Etruscus, until they were both killed by the Goths in the Battle of Abritus.

Early life and rise to power 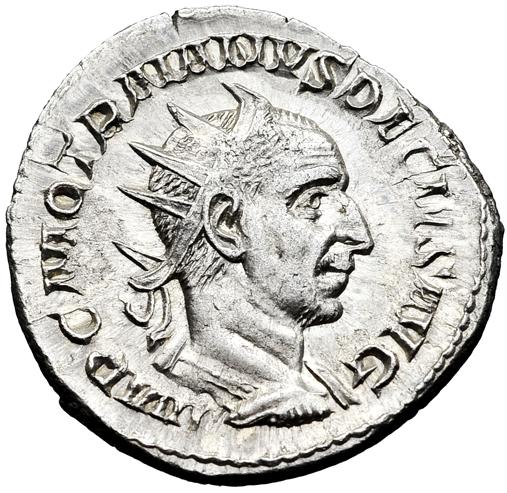 Decius, who was born at Budalia, near Sirmium in Pannonia Inferior (now Martinci and Sremska Mitrovica in Serbia), was one of the first among a long succession of future Roman emperors to originate from the Danube provinces, often simply called Illyricum. Unlike some of his immediate imperial predecessors such as Philip the Arab or Maximinus who did not have extensive administrative experience before assuming the throne, Decius was a distinguished senator who had served as suffect consul in 232, had been governor of Moesia and Germania Inferior soon afterwards, served as governor of Hispania Tarraconensis between 235 and 238, and was urban prefect of Rome during the early reign of Emperor Philip the Arab (Marcus Iulius Phillippus). Around 245, Philip entrusted Decius with an important command on the Danube. By the end of 248 or 249, Decius was sent to quell the revolt of Pacatianus and his troops in Moesia and Pannonia; some modern historians see this rebellion as a reflection of emerging Balkan separatism. After the collapse of the revolt, Decius let the troops proclaim him emperor. Philip advanced against him and was killed at Verona, Italy, in September 249. The Senate then recognized Decius as emperor, giving him the attribute ''Traianus'' in reference to Emperor Trajan. According to the Byzantine historian Zosimus, Decius was clothed in purple and forced to undertake the urdens ofgovernment, despite his reluctance and unwillingness.

Decius' political program was focused on the restoration of the strength of the State, both militarily opposing the external threats, and restoring the public piety with a program of renovation of the State religion.

Either as a concession to the Senate, or perhaps with the idea of improving public morality, Decius endeavoured to revive the separate office and authority of the censor. The choice was left to the Senate, who unanimously selected Valerian (the future emperor). But Valerian, well aware of the dangers and difficulties attached to the office at such a time, declined the responsibility. The invasion of the Goths and Decius' death put an end to the abortive attempt.

The Baths of Decius

During his reign, he proceeded with several building projects in Rome, "including the Thermae Decianae or Baths of Decius on the Aventine", which was completed in 252 and survived through to the 16th century; Decius also repaired the Colosseum, which had been damaged by lightning strikes.

In January 250, Decius is said to have issued one of the most remarkable Roman imperial edicts. From the numerous surviving texts from Egypt, recording the act of sacrifice, it appears that the edict itself was fairly clear: According to D. S. Potter, Decius did not try to impose the superiority of the Roman pantheon over any other gods. It is very probable that the edict was an attempt to legitimize his position and to respond to a general unease provoked by the passing of the Roman millennium. While Decius himself may have intended the edict as a way to reaffirm his conservative vision of the Pax Romana and to reassure Rome's citizens that the empire was still secure, it nevertheless sparked a "terrible crisis of authority as various Christian bishops and their flocks reacted to it in different ways." Measures were first taken demanding that the bishops and officers of the church make a sacrifice for the emperor. The sacrifice was "on behalf of" (Latin ''pro'') the emperor, not ''to'' the emperor, since a living emperor was not considered divine. Certificates were issued to those who satisfied the commissioners during the persecution of Christians under Decius. Forty-six such certificates have been published, all dating from 250, four of them from Oxyrhynchus. Anyone, including Christian followers, who refused to offer a sacrifice for the emperor and the Empire's well-being by a specified date risked torture and execution. A number of prominent Christians did, in fact, refuse to make a sacrifice and were killed in the process, including Pope Fabian himself in 250, and "anti-Christian feelingled to killings at Carthage and Alexandria."