''De Divinatione'' (Latin, "Concerning Divination") is a philosophical dialogue about ancient Roman divination written in 44 BC by Marcus Tullius Cicero.

''De Divinatione'' is set in two books, taking the form of a dialogue whose interlocutors are Cicero himself (speaking mostly in Book II, and including a fragment of Cicero's poem on his own consulship) and his brother Quintus. Book I deals with Quintus' apology of divination (in line with his essentially Stoic beliefs), while Book II contains Cicero's refutation of these from his Academic skeptic philosophical standpoint. Cicero concerns himself in some detail with the types of divination, dividing them into the "inspired" type (Latin ''furor'', Gk. ''mania'', "madness"), especially dreams, and the type which occurs via some form of skill of interpretation (i.e.,
haruspicy In the religion of ancient Rome, a haruspex (plural haruspices; also called aruspex) was a person trained to practice a form of divination called haruspicy (''haruspicina''), the inspection of the entrails ('' exta''—hence also extispicy ( ...
, extispicy, augury,
astrology Astrology is a pseudoscience that claims to divination, divine information about human affairs and terrestrial events by studying the movements and relative positions of Celestial objects in astrology, celestial objects. Astrology has bee ...
, and other
oracle An oracle is a person or agency considered to provide wise and insightful counsel or prophetic prediction Image:Old Farmer's Almanac 1793 cover.jpg, frame, ''The Old Farmer's Almanac'' is famous in the US for its (not necessarily accurate) ...
s). ''De Divinatione'' may be considered as a supplement to Cicero's ''
De Natura Deorum ''De Natura Deorum'' (''On the Nature of the Gods'') is a philosophical dialogue by Roman Academic Skeptic philosopher A philosopher is someone who practices philosophy. The term ''philosopher'' comes from the grc, φιλόσοφος, , tran ...
''. In ''De Divinatione'', Cicero professes to relate the substance of a conversation held at Tusculum with his brother, in which Quintus, following the principles of the
Stoics Stoicism is a school of Hellenistic philosophy founded by Zeno of Citium in Athens in the early 3rd century BC. It is a philosophy of personal ethics Ethics or moral philosophy is a branch of philosophy that "involves systematizing, defendin ...
, supported the credibility of divination, while Cicero himself controverted it. The dialogue consists of two books, in the first Quintus enumerates the different kinds or classes of divination, with reasons in their favour. The second book contains a refutation by Cicero of his brother's arguments. In the first book Quintus, after observing that divinations of various kinds have been common among all people, remarks that it is no argument against different forms of divination that we cannot explain how or why certain things happen. It is sufficient, that we know from experience and history that they do happen. He argues that although events may not always succeed as predicted, it does not follow that divination is not an art, any more than that medicine is not an art, because it does not always cure. Quintus offers various accounts of the different kinds of omens, dreams, portents, and divinations. He includes two remarkable dreams, one of which had occurred to Cicero and one to himself. He also asks if Greek history with its various accounts of omens should be also considered a fable. In the second book Cicero provides arguments against auguries, auspices, astrology, lots, dreams, and every species of omens and prodigies. It concludes with a chapter on the evils of superstition, and Cicero's efforts to extirpate it. The whole thread is interwoven by curious and interesting stories. ''De Divinatione'' is notable as one of posterity's primary sources on the workings of Roman religion, and as a source for the conception of scientificity in Roman classical antiquity.

* Nothing so absurd can be said that some philosopher had not said it. ( la, Sed nescio quo modo nihil tam absurde dici potest quod non dicatur ab aliquo philosophorum) (II, 119) * That old saying by Cato is quite well known; he said he was surprised that one
haruspex 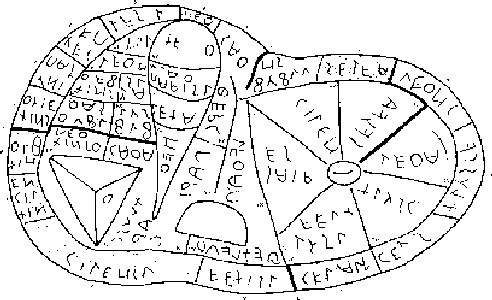