In military tactics, close air support (CAS) is defined as air action such as air strikes by fixed or rotary-winged aircraft against hostile targets near friendly forces and require detailed integration of each air mission with fire and movement of these forces and attacks with aerial bombs, glide bombs, missiles, rockets, aircraft cannons, machine guns, and even directed-energy weapons such as lasers. The requirement for detailed integration because of proximity, fires or movement is the determining factor. CAS may need to be conducted during shaping operations with Special Operations Forces (SOF) if the mission requires detailed integration with the fire and movement of those forces. A closely related subset of air interdiction (AI), battlefield air interdiction, denotes interdiction against units with near-term effects on friendly units, but which does not require integration with friendly troop movements. The term "battlefield air interdiction" is not currently used in U.S. joint doctrine. CAS requires excellent coordination with ground forces. In advanced modern militaries, that coordination is typically handled by specialists such as Joint Fires Observers (JFOs), Joint Terminal Attack Controllers (JTACs), and forward air controllers (FACs). The First World War was the first conflict to make extensive use of CAS, albeit using relatively primitive methods in contrast to later warfare. Even so, it was clear that coordination between aerial and ground forces via radio communication typically made such attacks more effective. Appropriately modified, the British F.E 2b fighter became the first ground-attack aircraft, while Germany produced the first purpose built ground attack aircraft in the form of the Junkers J.I; the Sopwith Camel was another successful early platform. Both the Sinai and Palestine Campaign and the Spring Offensive of 1918 made extensive use of CAS aircraft. The interwar period saw CAS doctrine continue to advance, although theorists and aviators would often clash over its strategic value. Several different conflicts, including the Russo-Polish War, the Spanish Civil War, colonial wars in the Middle East and the Gran Chaco War, were noticeably impacted by CAS operations. The Second World War marked the universal acceptance of the integration of air power into combined arms warfare. Although the German ''Luftwaffe'' was the only force to use CAS at the start of the war, all the major combatants had developed effective air-ground coordination techniques by the conflict's end. New techniques, such as the use of forward air control to guide CAS aircraft and identifying invasion stripes, also emerged at this time, being heavily shaped by the Italian Campaign and the invasion of Normandy. CAS practices continued to advance in further conflicts, including the Korean War and the Vietnam War; major milestones including the introduction of attack helicopters and the creation of aerial gunships, such as the Bell AH-1 Cobra and the Douglas AC-47 Spooky. While many CAS aircraft have been propeller driven, several jet aircraft, such as the A-10 Thunderbolt II (''Warthog'') and the Su-25 (''Frogfoot''), have been developed as well.

The use of aircraft in the close air support of ground forces dates back to the First World War, the first conflict to make significant military use of aerial forces. Air warfare, and indeed aviation itself, was still in its infancy—and the direct effect of rifle caliber machine guns and light bombs of the First World War aircraft was very limited compared with the power of (for instance) an average fighter bomber of the Second World War, but CAS aircraft were still able to achieve a powerful psychological impact. The aircraft was a visible and personal enemy—unlike artillery—presenting a personal threat to enemy troops, while providing friendly forces assurance that their superiors were concerned about their situation. The most successful attacks of 1917–1918 had included planning for co-ordination between aerial and ground units, although it was relatively difficult at this early date to co-ordinate these attacks due to the primitive nature of air-to-ground radio communication. Though most air-power proponents sought independence from ground commanders and hence pushed the importance of interdiction and strategic bombing, they nonetheless recognized the need for close air support.

From the commencement of hostilities in 1914, aviators engaged in sporadic and spontaneous attacks on ground forces, but it was not until 1916 that an air support doctrine was elaborated and dedicated fighters for the job were put into service. By that point, the startling and demoralizing effect that attack from the air could have on the troops in the trenches had been made clear. At the Battle of the Somme, 18 British armed reconnaissance planes strafed the enemy trenches after conducting surveillance operations. The success of this improvised assault spurred innovation on both sides. In 1917, following the Second Battle of the Aisne, the British debuted the first ground-attack aircraft, a modified F.E 2b fighter carrying bombs and mounted machine-guns. After exhausting their ammunition, the planes returned to base for refueling and rearming before returned to the battle-zone. Other modified planes used in this role were the Airco DH.5 and Sopwith Camel—the latter was particularly successful in this role. Aircraft support was first integrated into a battle plan on a large scale at the 1917 Battle of Cambrai, where a significantly larger number of tanks were deployed than previously. By that time, effective anti-aircraft tactics were being used by the enemy infantry and pilot casualties were high, although air support was later judged as having been of a critical importance in places where the infantry had got pinned down. At this time, British doctrine came to recognize two forms of air support; trench strafing (the modern-day doctrine of CAS), and ground strafing (the modern-day doctrine of air interdiction)—attacking tactical ground targets away from the land battle. As well as strafing with machine-guns, planes engaged in such operations were commonly modified with bomb racks; the plane would fly in very low to the ground and release the bombs just above the trenches. 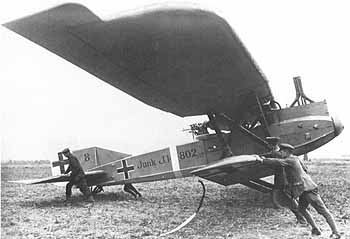 The Germans were also quick to adopt this new form of warfare and were able to deploy aircraft in a similar capacity at Cambrai. While the British used single-seater planes, the Germans preferred the use of heavier two-seaters with an additional machine gunner in the aft cockpit. The Germans adopted the powerful Hannover CL.II and built the first purpose built ground attack aircraft, the Junkers J.I. During the 1918 Spring Offensive, the Germans employed 30 squadrons, or ''Schlasta'', of ground attack fighters and were able to achieve some initial tactical success.