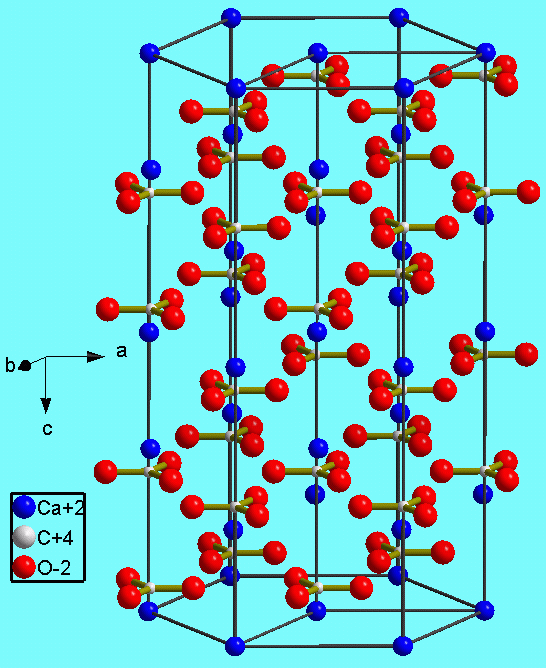 Calcium carbonate is a chemical compound with the formula CaCO3. It is a common substance found in rocks as the minerals calcite and aragonite (most notably as limestone, which is a type of sedimentary rock consisting mainly of calcite) and is the main component of eggshells, snail shells, seashells and pearls. Calcium carbonate is the active ingredient in agricultural lime and is created when calcium ions in hard water react with carbonate ions to create limescale. It has medical use as a calcium supplement or as an antacid, but excessive consumption can be hazardous and cause hypercalcemia and digestive issues.

Calcium carbonate shares the typical properties of other carbonates. Notably it * reacts with acids, releasing carbon dioxide (technically speaking, carbonic acid, but that disintegrates quickly to CO2 and H2O): ::CaCO3() + 2 H+() → Ca2+() + CO2() + H2O() * releases carbon dioxide upon heating, called a thermal decomposition reaction, or calcination (to above 840 °C in the case of CaCO3), to form calcium oxide, commonly called quicklime, with reaction enthalpy 178 kJ/mol: ::CaCO3() → CaO() + CO2() Calcium carbonate will react with water that is saturated with carbon dioxide to form the soluble calcium bicarbonate. :CaCO3() + CO2() + H2O() → Ca(HCO3)2() This reaction is important in the erosion of carbonate rock, forming caverns, and leads to hard water in many regions. An unusual form of calcium carbonate is the hexahydrate, ikaite, CaCO3·6H2O. Ikaite is stable only below 8 °C.

The thermodynamically stable form of CaCO3 under normal conditions is hexagonal β-CaCO3 (the mineral calcite). Other forms can be prepared, the denser (2.83 g/cm3) orthorhombic λ-CaCO3 (the mineral aragonite) and hexagonal μ-CaCO3, occurring as the mineral vaterite. The aragonite form can be prepared by precipitation at temperatures above 85 °C, the vaterite form can be prepared by precipitation at 60 °C. Calcite contains calcium atoms coordinated by six oxygen atoms, in aragonite they are coordinated by nine oxygen atoms. The vaterite structure is not fully understood. Magnesium carbonate (MgCO3) has the calcite structure, whereas strontium carbonate and barium carbonate (SrCO3 and BaCO3) adopt the aragonite structure, reflecting their larger ionic radii.

Carbonate is found frequently in geologic settings and constitutes an enormous carbon reservoir. Calcium carbonate occurs as aragonite, calcite and dolomite as significant constituents of the calcium cycle. The carbonate minerals form the rock types: limestone, chalk, marble, travertine, tufa, and others. In warm, clear tropical waters corals are more abundant than towards the poles where the waters are cold. Calcium carbonate contributors, including plankton (such as coccoliths and planktic foraminifera), coralline algae, sponges, brachiopods, echinoderms, bryozoa and mollusks, are typically found in shallow water environments where sunlight and filterable food are more abundant. Cold-water carbonates do exist at higher latitudes but have a very slow growth rate. The calcification processes are changed by ocean acidification. Where the oceanic crust is subducted under a continental plate sediments will be carried down to warmer zones in the asthenosphere and lithosphere. Under these conditions calcium carbonate decomposes to produce carbon dioxide which, along with other gases, give rise to explosive volcanic eruptions.

Calcium carbonate can preserve fossils through permineralization. Most of the vertebrate fossils of the Two Medicine Formation—a geologic formation known for its duck-billed dinosaur eggs—are preserved by CaCO3 permineralization. This type of preservation conserves high levels of detail, even down to the microscopic level. However, it also leaves specimens vulnerable to weathering when exposed to the surface. Trilobite populations were once thought to have composed the majority of aquatic life during the Cambrian, due to the fact that their calcium carbonate-rich shells were more easily preserved than those of other species, which had purely chitinous shells.

The main use of calcium carbonate is in the construction industry, either as a building material, or limestone aggregate for road building, as an ingredient of cement, or as the starting material for the preparation of builders' lime by burning in a kiln. However, because of weathering mainly caused by acid rain, calcium carbonate (in limestone form) is no longer used for building purposes on its own, but only as a raw primary substance for building materials. Calcium carbonate is also used in the purification of iron from iron ore in a blast furnace. The carbonate is calcined ''in situ'' to give calcium oxide, which forms a slag with various impurities present, and separates from the purified iron. In the oil industry, calcium carbonate is added to drilling fluids as a formation-bridging and filtercake-sealing agent; it is also a weighting material which increases the density of drilling fluids to control the downhole pressure. Calcium carbonate is added to swimming pools, as a pH corrector for maintaining alkalinity and offsetting the acidic properties of the disinfectant agent. It is also used as a raw material in the refining of sugar from sugar beet; it is calcined in a kiln with anthracite to produce calcium oxide and carbon dioxide. This burnt lime is then slaked in fresh water to produce a calcium hydroxide suspension for the precipitation of impurities in raw juice during carbonatation. Calcium carbonate in the form of chalk has traditionally been a major component of blackboard chalk. However, modern manufactured chalk is mostly gypsum, hydrated calcium sulfate CaSO4·2H2O. Calcium carbonate is a main source for growing biorock. Precipitated calcium carbonate (PCC), pre-dispersed in slurry form, is a common filler material for latex gloves with the aim of achieving maximum saving in material and production costs. Fine ground calcium carbonate (GCC) is an essential ingredient in the microporous film used in diapers and some building films, as the pores are nucleated around the calcium carbonate particles during the manufacture of the film by biaxial stretching. GCC and PCC are used as a filler in paper because they are cheaper than wood fiber. In terms of market volume, GCC are the most important types of fillers currently used. Printing and writing paper can contain 10–20% calcium carbonate. In North America, calcium carbonate has begun to replace kaolin in the production of glossy paper. Europe has been practicing this as alkaline papermaking or acid-free papermaking for some decades. PCC used for paper filling and paper coatings is precipitated and prepared in a variety of shapes and sizes having characteristic narrow particle size distributions and equivalent spherical diameters of 0.4 to 3 micrometers. Calcium carbonate is widely used as an extender in paints, in particular matte emulsion paint where typically 30% by weight of the paint is either chalk or marble. It is also a popular filler in plastics.