Bukharan Jews, also called Bukharian Jews (Tajik and Bukhori Cyrillic: Яҳудиёни Бухоро, ''Yahudiyoni Buxoro'', Bukhori Hebrew Script: יהודי בוכארא; Uzbek: ''Buxoro yahudiylari''; he|יהודים בוכרים ''Yehudim Bukharim'', or יהודי בוכארה, ''Yehudey Bukhara''; russian: Бухарские евреи, ''Buharskije jevrei''), are a Jewish ethno-religious group of Central Asia which historically spoke Bukhori, a Judeo-Persian dialect of the Persian language. Their name comes from the former Central Asian Emirate of Bukhara, which once had a sizable Jewish community. Since the dissolution of the Soviet Union, the great majority have immigrated to Israel or to the United States (especially Forest Hills, New York), while others have immigrated to Europe or Australia.

The term ''Bukharan'' was coined by European travelers who visited Central Asia around the 16th century. Since most of the Jewish community at the time lived under the Emirate of Bukhara, they came to be known as ''Bukharan'' Jews. The name by which the community called itself is "Isro'il" (Israelites). The appellative ''Bukharian'' was adopted by Bukharan Jews who moved to English-speaking countries, in an anglicisation of the Hebrew ''Bukhari''. However, ''Bukharan'' was the term used historically by English writers, as it was for other aspects of Bukhara. Bukharan Jews used the Persian language to communicate among themselves and later developed Bukhori, a Tajik dialect of the Persian language with small linguistic traces of Hebrew. This language provided easier communication with their neighboring communities and was used for all cultural and educational life among the Jews. It was used widely until the area was "Russified" by the Russians and the dissemination of "religious" information was halted. The elderly Bukharan generation use Bukhori as their primary language but speak Russian with a slight Bukharan accent. The younger generation use Russian as their primary language, but do understand or speak Bukhori. The Bukharan Jews are Mizrahi Jews and have been introduced to and practice Sephardic Judaism. The first primary written account of Jews in Central Asia dates to the beginning of the 4th century CE. It is recalled in the Talmud by Rabbi Shmuel bar Bisna, a member of the Talmudic academy in Pumbeditha, who traveled to Margiana (present-day Merv in Turkmenistan) and feared that the wine and alcohol produced by local Jews was not kosher. The presence of Jewish communities in Merv is also proven by Jewish writings on ossuaries from the 5th and 6th centuries, uncovered between 1954 and 1956.

According to some ancient texts, Israelites began traveling to Central Asia to work as traders during the reign of King David of Jerusalem as far back as the 10th century B.C.E. When Persian King Cyrus the Great conquered Babylon in 539 BC, he encouraged the Jews he liberated to settle in his empire, which included areas of Central Asia. In the Middle Ages, the largest Jewish settlement in Central Asia was in the Emirate of Bukhara. Among Bukharan Jews, there are two ancient theories of how Jewish people settled in Central Asia. One theory is that Bukharan Jews may be descended from the Tribe of Naphtali and the Tribe of Issachar of the Ten Lost Tribes, who were exiled during the Assyrian captivity of Israel in the 7th century BCE. Isakharov (in different spellings) is a common surname. Modern sources have described the Bukhara Jews as, for example, "an ethnic and linguistic group in Central Asia, claiming descent from 5th-century exiles from Persia". The Bukharan Jews are considered one of the oldest ethno-religious groups of Central Asia and over the years they have developed their own distinct culture. Throughout the years, Jews from other Eastern countries such as Iraq, Iran, Yemen, Syria, and Morocco migrated into Central Asia (usually by taking the Silk Road).

Around 1620, the first synagogue was constructed at Bukhara city. This was done in contravention of the law prescribed to Caliph Omar who forbade the construction of new non-Muslim places of worship including synagogues as well as forbade the destruction of those that existed in the pre-Islamic period. There was a case when Caliph Umar had ordered the destruction of a mosque, which was built illegally on Jewish land. Before the construction of the first synagogue, Jews had shared a place in a mosque with Muslims. This mosque was called the Magoki Attoron (the "Mosque in pit"). Some say that Jews and Muslims worshipped alongside each other in the same place at the same time. Other sources insist that Jews worshipped after Muslims. The construction of the first Bukhara synagogue was credited to two people: Nodir Divan-Begi, an important grandee, and an anonymous widow, who reportedly outwitted an official. During the 18th century, Bukharan Jews faced considerable discrimination and persecution. Jewish centers were closed down, the Muslims of the region usually forced conversion on the Jews, and the Bukharan Jewish population dramatically decreased to the point where they were almost extinct. Due to pressures to convert to Islam, persecution, and isolation from the rest of the Jewish world, the Jews of Bukhara began to lack knowledge and practice of their Jewish religion. By the middle of the 18th century, practically all Bukharan Jews lived in the Bukharan Emirate. 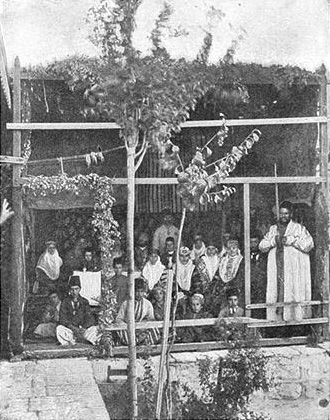 In 1793, Rabbi Yosef Maimon, a Sephardic Jew from Tetuan, Morocco and prominent kabbalist in Safed, traveled to Bukhara and found the local Jews in a very bad state. He decided to settle there. Maimon was disappointed to see so many Jews lacking knowledge and observance of their religious customs and Jewish law. He became a spiritual leader, aiming to educate and revive the Jewish community's observance and faith in Judaism. He changed their Persian religious tradition to Sephardic Jewish tradition. Maimon is an ancestor of Shlomo Moussaieff, author Jeffrey Moussaieff Masson, and the former First Lady of Iceland Dorrit Moussaieff. , c. 1910]]

In 1843 the Bukharan Jews were visited by the so-called "Eccentric Missionary", Joseph Wolff, a Jewish convert to Christianity who had set himself the broad task of finding the Lost Tribes of Israel and the narrow one of seeking two British officers who had been captured by the Emir, Nasrullah Khan. Wolff wrote prolifically of his travels, and the journals of his expeditions provide valuable information about the life and customs of the peoples he travelled amongst, including the Bukharan Jews. In 1843, for example, they collected 10,000 silver ''tan'ga'' and purchased land in Samarkand, known as ''Makhallai Yakhudion'', close to Registon. In the middle of the 19th century, Bukharan Jews began to move to Palestine. The land on which they settled in Jerusalem was named the Bukharim quarter (Sh'hunat HaBucharim) and still exists today. In 1865, Russian troops took over Tashkent, and there was a large influx of Jews to the newly created Turkestan Region. From 1876 to 1916, Jews were free to practice Judaism. Dozens of Bukharan Jews held prestigious jobs in medicine, law, and government, and many Jews prospered. Many Bukharan Jews became successful and well-respected actors, artists, dancers, musicians, singers, film producers, and sportsmen. Several Bukharan entertainers became artists of merit and gained the title "People's Artist of Uzbekistan", "People's Artist of Tajikistan", and even (in the Soviet era) "People's Artist of the Soviet Union". Jews succeeded in the world of sport also, with several Bukharan Jews in Uzbekistan becoming renowned boxers and winning many medals for the country. Still, Bukharan Jews were forbidden to ride in the streets and had to wear distinctive costumes. They were relegated to a ghetto, and often fell victim to persecution from the Muslim majority.

thumb|Jewish cemetery in Bukhara By the time of the Russian revolution, the Bukharan Jews were one of the most isolated Jewish communities in the world. In Central Asia, the community attempted to preserve their traditions while displaying loyalty to the government. World War II and the Holocaust brought a lot of Ashkenazi Jewish refugees from the European regions of the Soviet Union and Eastern Europe through Uzbekistan. After the Soviet capture of Bukhara, many Bukharan Jews fled to the west. The route they undertook went through Afghanistan, as the neighbouring country had many possibilities to the west. Consequently, Central Asian Jews in Paris had an Afghan nationality while a minority of them were born in Afghanistan. For instance many Jewish families with the Afghan nationality were born in Kokand. Starting in 1972, one of the largest Bukharan Jewish emigrations in history occurred as the Jews of Uzbekistan and Tajikistan immigrated to Israel and the United States, due to looser restrictions on immigration. In the late 1980s to the early 1990s, almost all of the remaining Bukharan Jews left Central Asia for the United States, Israel, Europe, or Australia in the last mass emigration of Bukharan Jews from their resident lands.

With the disintegration of the Soviet Union and foundation of the independent Republic of Uzbekistan in 1991, some feared growth of nationalistic policies in the country. The resurgence of Islamic fundamentalism in Uzbekistan and Tajikistan prompted an increase in the level of emigration of Jews (both Bukharan and Ashkenazi). Before the collapse of the USSR, there were 45,000 Bukharan Jews in Central Asia. Today, there are about 150,000 Bukharan Jews in Israel (mainly in the Tel Aviv metropolitan area including the neighborhoods of Tel Kabir, Shapira, Kiryat Shalom, HaTikvah and cities like Or Yehuda, Ramla, and Holon) and 60,000 in the United States (especially Queens—a borough of New York that is widely known as the "melting pot" of the United States due to its ethnic diversity)—with smaller communities in the USA like Phoenix, South Florida, Atlanta, San Diego, Los Angeles, Seattle, and Denver. Only a few thousand still remain in Uzbekistan. About 500 live in Canada (mainly Toronto, Ontario and Montreal, Quebec). Almost no Bukharan Jews remain in Tajikistan (compared to the 1989 Jewish population of 15,000 in Tajikistan).

In early 2006, the still-active Dushanbe Synagogue in Tajikistan as well as the city's mikveh (ritual bath), kosher butcher, and Jewish schools were demolished by the government (without compensation to the community) to make room for the new Palace of Nations. After an international outcry, the government of Tajikistan announced a reversal of its decision and publicly claimed that it would permit the synagogue to be rebuilt on its current site. However, in mid-2008, the government of Tajikistan destroyed the whole synagogue and started construction of the Palace of Nations. The Dushanbe synagogue was Tajkistan's only synagogue and the community were therefore left without a centre or a place to pray. As a result, the majority of Bukharan Jews from Tajikistan living in Israel and the United States have very negative views towards the Tajik government and many have cut off all ties they had with the country. In 2009, the Tajik government reestablished the synagogue in a different location for the small Jewish community.