thumb|upright=1|Tilted sedimentary bedding in shales_of_the_[[Cretaceous_[[Morro_Solar_Group.html" style="text-decoration: none;"class="mw-redirect" title="Cretaceous.html" style="text-decoration: none;"class="mw-redirect" title="shales of the shales_of_the_[[Cretaceous_[[Morro_Solar_Group">Salto_del_Fraile_Formation,_Peru..html" style="text-decoration: none;"class="mw-redirect" title="Cretaceous">shales of the [[Cretaceous [[Morro Solar Group">Salto del Fraile Formation, Peru.">Cretaceous">shales of the [[Cretaceous [[Morro Solar Group">Salto del Fraile Formation, Peru. Beds are the layers of [[sedimentary]] rocks that are distinctly different from overlying and underlying subsequent beds of different sedimentary rocks. Layers of beds are called [[stratigraphy|strata]]. They are formed from sedimentary rocks being deposited on the Earth's solid surface over a long periods of time. The strata are layered in the same order that they were deposited, permitting discrimination as to which beds are younger and which ones are older (the Law of Superposition). The structure of a bed is determined by its bedding plane, the surface that separates two layers. Beds can be differentiated in various ways, including rock or mineral type and particle size. The term is generally applied to sedimentary strata, but may also be used for volcanic flows or ash layers. Types of beds include cross beds and graded beds. Cross beds are not layered horizontally and are formed by a combination of local deposition on the inclined surfaces of ripples or dunes, and local erosion. Graded beds shows a gradual change in grain or clast sizes from one side of the bed to the other. A normal grading occurs where there are larger grain sizes on the older side, while an inverse grading is where there are smaller grain sizes on the older side. By knowing the type of beds, geologists can determine the relative ages of the rocks. 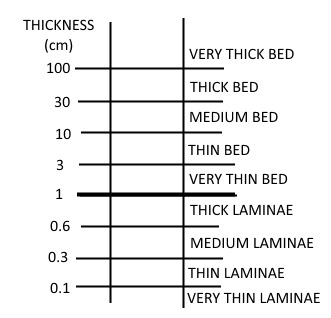 A bed is the smallest lithostratigraphic unit, usually ranging in thickness from a centimeter to several meters and distinguishable from beds above and below it. * Very Thick Bed - 100cm * Thick Bed - 30cm * Medium Bed - 10cm * Thin Bed - 3cm * Very Thin Bed - 1cm * Thinner than 1cm is called a Lamina

In geotechnical engineering a bedding plane often forms a discontinuity that may have a large influence on the mechanical behaviour (strength, deformation, etc.) of soil and rock masses in, for example, tunnel, foundation, or slope construction.

There are geologic principles that the beds normally follow. Even though there can be cases where the principles do not apply mostly due to faults, they are true for most cases. * Law of Superposition is the law that states that the oldest rocks are deposited first and has the younger layers deposited last, as long as the beds have not been overturned through tectonic activities. This is used to date the stratigraphy and their relative ages. * Law of Original Horizontality states that if the beds are not horizontal, then the layers were caused to either fold or tilt through tectonic activities. They were all deposited horizontally due to gravity. * Law of Lateral Continuity states that the bed deposits extends in all lateral directions. This implies that if two places separated by erosional features have similar rocks, it could mean that they were originally continuous. * Cross-Cutting Relationship states that a fault is younger than the rock layers that it goes through. It helps with relatively dating the rocks.