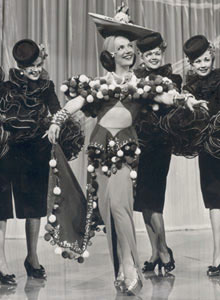 as Baroness Cecilia Duarte, Don Ameche as Larry Martin and Baron Manuel Duarte, and Carmen Miranda as Carmen in ''That Night in Rio'', produced by Fox in 1941]] 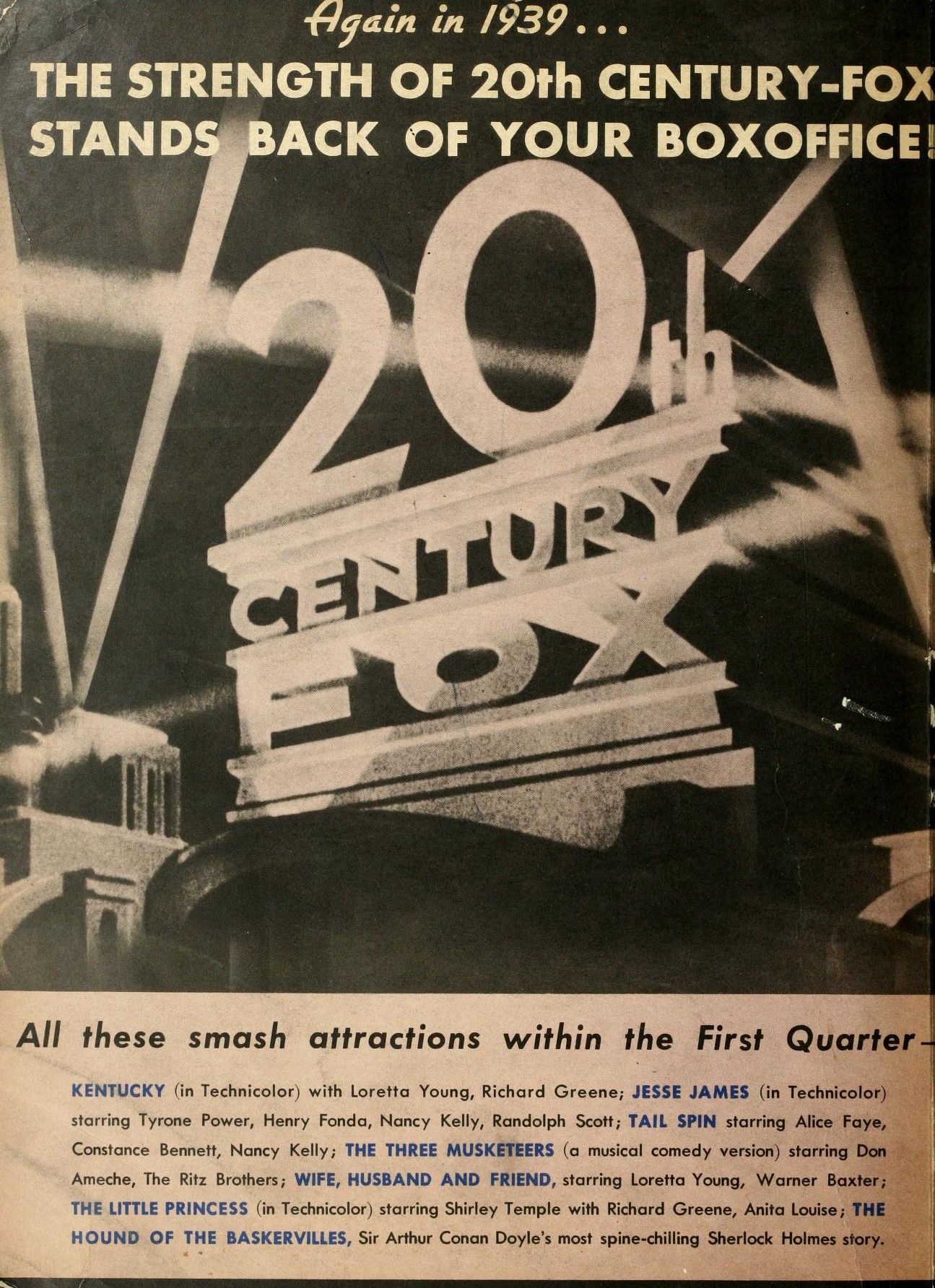 File:Foxstudiosentrance.jpg|thumb|right|The entrance to 20th Century's studio lot Twentieth Century Pictures' Joseph Schenck and Darryl F. Zanuck left United Artists over a stock dispute, and began merger talks with the management of financially struggling Fox Film, under President Sidney Kent. Spyros Skouras, then manager of the Fox West Coast Theaters, helped make it happen (and later became president of the new company). The company had been struggling since founder William Fox lost control of the company in 1930. Fox Film Corporation and Twentieth Century Pictures merged in 1935. Initially, it was speculated in ''The New York Times'' that the newly merged company would be named ''Fox-Twentieth Century Pictures''. The new company, Twentieth Century-Fox Film Corporation, began trading on May 31, 1935. Kent remained at the company, joining Schenck and Zanuck. Zanuck replaced Winfield Sheehan as the company's production chief. The company established a special training school. Lynn Bari, Patricia Farr and Anne Nagel were among 14 young women "launched on the trail of film stardom" on August 6, 1935, when they each received a six-month contract with 20th Century-Fox after spending 18 months in the school. The contracts included a studio option for renewal for as long as seven years. For many years, 20th Century-Fox claimed to have been founded in 1915, the year Fox Film was founded. For instance, it marked 1945 as its 30th anniversary. However, in recent years it has claimed the 1935 merger as its founding, even though most film historians agree it was founded in 1915. The company's films retained the 20th Century Pictures searchlight logo on their opening credits as well as its opening fanfare, but with the name changed to 20th Century-Fox. After the merger was completed, Zanuck signed young actors to help carry 20th Century-Fox: Tyrone Power, Linda Darnell, Carmen Miranda, Don Ameche, Henry Fonda, Gene Tierney, Sonja Henie, and Betty Grable. 20th Century-Fox also hired Alice Faye and Shirley Temple, who appeared in several major films for the studio in the 1930s. Higher attendance during World War II helped 20th Century-Fox overtake RKO and Metro-Goldwyn-Mayer to become the third most profitable film studio. In 1941, Zanuck was commissioned as a lieutenant colonel in the U.S. Signal Corps and assigned to supervise production of U.S. Army training films. His partner, William Goetz, filled in at 20th Century-Fox. In 1942, Spyros Skouras succeeded Kent as president of the studio. During the next few years, with pictures like ''Wilson'' (1944), ''The Razor's Edge'' (1946), ''Boomerang'', ''Gentleman's Agreement'' (both 1947), ''The Snake Pit'' (1948), and ''Pinky'' (1949), Zanuck established a reputation for provocative, adult films. 20th Century-Fox also specialized in adaptations of best-selling books such as Ben Ames Williams' ''Leave Her to Heaven'' (1945), starring Gene Tierney, which was the highest-grossing 20th Century-Fox film of the 1940s. The studio also produced film versions of Broadway musicals, including the Rodgers and Hammerstein films, beginning with the musical version of ''State Fair'' (1945), the only work that the partnership written especially for films. After the war, audiences slowly drifted away with the advent of television. 20th Century-Fox held on to its theaters until a court-mandated "divorce"; they were spun off as Fox National Theaters in 1953. That year, with attendance at half the 1946 level, 20th Century-Fox gambled on an unproven process. Noting that the two film sensations of 1952 had been Cinerama, which required three projectors to fill a giant curved screen, and "Natural Vision" 3D, which got its effects of depth by requiring the use of polarized glasses, 20th Century-Fox mortgaged its studio to buy rights to a French anamorphic projection system which gave a slight illusion of depth without glasses. President Spyros Skouras struck a deal with the inventor Henri Chrétien, leaving the other film studios empty-handed, and in 1953 introduced CinemaScope in the studio's groundbreaking feature film ''The Robe''. Zanuck announced in February 1953 that henceforth all 20th Century-Fox pictures would be made in CinemaScope. To convince theater owners to install this new process, 20th Century-Fox agreed to help pay conversion costs (about $25,000 per screen); and to ensure enough product, 20th Century-Fox gave access to CinemaScope to any rival studio choosing to use it. Seeing the box-office for the first two CinemaScope features, ''The Robe'' and ''How to Marry a Millionaire'' (also 1953), Warner Bros., MGM, Universal-International), Columbia Pictures and Disney quickly adopted the process. In 1956, 20th Century-Fox engaged Robert Lippert to establish a subsidiary company, Regal Pictures, later Associated Producers Incorporated to film B pictures in CinemaScope (but "branded" RegalScope). 20th Century-Fox produced new musicals using the CinemaScope process including ''Carousel'' and ''The King and I'' (both 1956). CinemaScope brought a brief upturn in attendance, but by 1956 the numbers again began to slide. That year Darryl Zanuck announced his resignation as head of production. Zanuck moved to Paris, setting up as an independent producer, seldom being in the United States for many years.

, Century City headquarters completed in 1987|alt=]] With financial stability came new owners, when 20th Century-Fox was sold for $720 million on June 8, 1981 to investors Marc Rich and Marvin Davis. 20th Century-Fox's assets included Pebble Beach Golf Links, the Aspen Skiing Company and a Century City property upon which Davis built and twice sold Fox Plaza. By 1984, Rich had become a fugitive from justice, having fled to Switzerland after being charged by U.S. federal prosecutors with tax evasion, racketeering and illegal trading with Iran during the Iran hostage crisis. Rich's assets were frozen by U.S. authorities. In 1984 Marvin Davis bought out Marc Rich's 50% interest in 20th Century-Fox Film Corporation for an undisclosed amount, reported to be $116 million. Davis sold this interest to Rupert Murdoch's News Corporation for $250 million in March 1985. Davis later backed out of a deal with Murdoch to purchase John Kluge's Metromedia television stations. Murdoch went ahead alone and bought the stations, and later bought out Davis' remaining stake in 20th Century Fox for $325 million. From 1985, the hyphen was quietly dropped from the brand name, with ''20th Century-Fox'' changing to ''20th Century Fox''. To gain FCC approval of 20th Century-Fox's purchase of Metromedia's television holdings, once the stations of the long-dissolved DuMont network, Murdoch had to become a U.S. citizen. He did so in 1985, and in 1986 the new Fox Broadcasting Company took to the air. Over the next 20-odd years the network and owned-stations group expanded to become extremely profitable for News Corp. The company formed its Fox Family Films division in 1994 to boost production at the studio and would handled animation films. In February 1998, following the success of ''Anastasia'', Fox Family Films changed its name to Fox Animation Studios and drop its live action production which would be picked up by other production units. thumb|left|The Fox Broadcasting Company's Los Angeles studios in 2005 Since January 2000, this company has been the international distributor for MGM/UA releases. In the 1980s, 20th Century Fox — through a joint venture with CBS called CBS/Fox Video — had distributed certain UA films on video; thus UA has come full circle by switching to 20th Century Fox for video distribution. 20th Century Fox also makes money distributing films for small independent film companies. In late 2006, Fox Atomic was started up under Fox Searchlight head Peter Rice and COO John Hegeman as a sibling production division under Fox Filmed Entertainment. In early 2008, Atomic's marketing unit was transferred to Fox Searchlight and 20th Century Fox, when Hegeman moved to New Regency Productions. Debbie Liebling became president. After two middling successes and falling short with other films, the unit was shut down in April 2009. The remaining films under Atomic in production and post-productions were transferred to 20th Century Fox and Fox Spotlight with Liebling overseeing them.