In late February 1948, the Communist Party of Czechoslovakia, with Soviet backing, assumed undisputed control over the government of Czechoslovakia, marking the onset of four decades of communist rule in the country., sk|Február 1948) or "Victorious February" ( cs|Vítězný únor, sk|Víťazný február) The coup's significance extended well beyond the state's boundaries as it was a clear marker along the already well-advanced road to full-fledged Cold War. The event alarmed Western countries and helped spur quick adoption of the Marshall Plan, the creation of a state in West Germany, paramilitary measures to keep communists out of power in France, Greece and especially Italy, and steps toward mutual security that would, in little over a year, result in the establishment of NATO and the definitive drawing of the Iron Curtain until the Revolutions of 1989.

In the aftermath of World War II, the Communist Party of Czechoslovakia (KSČ) was in a favourable position. Its powerful influence on Czechoslovak politics since the 1920s, its clean wartime record and cooperation with non-Communist parties, its identification with the Soviet Union, one of the country's liberators, and its determination to become the country's leading political force without alarming the West (a strategy followed too by Communist parties in Italy and France) dovetailed with popular opposition to Nazi rule, the longing for real change that followed it, and the new political realities of living within the Soviet orbit to produce a surge in membership from 40,000 in 1945 to 1.35 million in 1948. Moreover, the Soviets viewed the country as a strategic prize: it bordered West Germany and boasted uranium deposits around Jáchymov. Nonetheless, party leader Klement Gottwald said in 1945 that "in spite of the favourable situation, the next goal is not soviets and socialism, but rather carrying out a really thorough democratic national revolution", thereby linking his party to the Czechoslovak democratic tradition (he even claimed to be a disciple of Tomáš Masaryk) and to Czech nationalism by capitalizing on popular intense anti-German feelings. During the early postwar period, working with the other parties in a coalition called the National Front, the Communists kept up the appearance of being willing to work within the system. Thus, in the 1946 election, the KSČ won 38% of the vote. This was the best-ever performance by a European Communist party in a free election, and was far more than the 22% won by their Hungarian counterparts the following year in the only other free and fair postwar election in the Soviet area of influence. President Edvard Beneš, not himself a Communist but very amenable to cooperation with the Soviets, and who hoped for restraint by the Allied powers, thus invited Gottwald to be prime minister. Although the government still had a non-Communist majority (nine Communists and seventeen non-Communists), the KSČ had initial control over the police and armed forces, and came to dominate other key ministries such as those dealing with propaganda, education, social welfare and agriculture; they also soon dominated the civil service. However, by the summer of 1947 the KSČ had alienated whole blocs of potential voters. The activities of the police—headed by Interior Minister Václav Nosek, a Communist—were acutely offensive to many citizens; farmers objected to talk of collectivization, and some workers were angry at Communist demands that they increase output without being given higher wages. The general expectation was that the Communists would be soundly defeated in the May 1948 elections. That September, at the first Cominform meeting, Andrei Zhdanov observed that Soviet victory had helped achieve "the complete victory of the working class over the bourgeoisie in every East European land except Czechoslovakia, where the power contest still remains undecided." This clearly implied the KSČ should be accelerating its own efforts to take complete power. That notion would be reinforced during the Prague Spring, when party archives were opened and showed that Stalin gave up the whole idea of a parliamentary path for Czechoslovakia when the Communist parties of France and Italy failed to achieve power in 1947 and 1948. The KSČ's number-two leader, general secretary Rudolf Slánský, represented the KSČ at the meeting. He returned to Prague with a plan for the final seizure of power. Slánský remarked, "as in the international field, we have gone on the offensive on the domestic front as well." The KSČ pursued a two-pronged strategy. The party knew it had to maintain the façade of working within the electoral political system and was aware that a revolutionary coup would be unacceptable. It desired to gain an absolute majority at elections scheduled for 1948, but the fracturing of the left-wing coalition made this unrealistic. This pushed the party into extra-parliamentary action. The organization of "spontaneous" demonstrations to "express the will of the people" and continuous visits to parliament by workers' delegations were meant to ensure "mobilization of the masses". 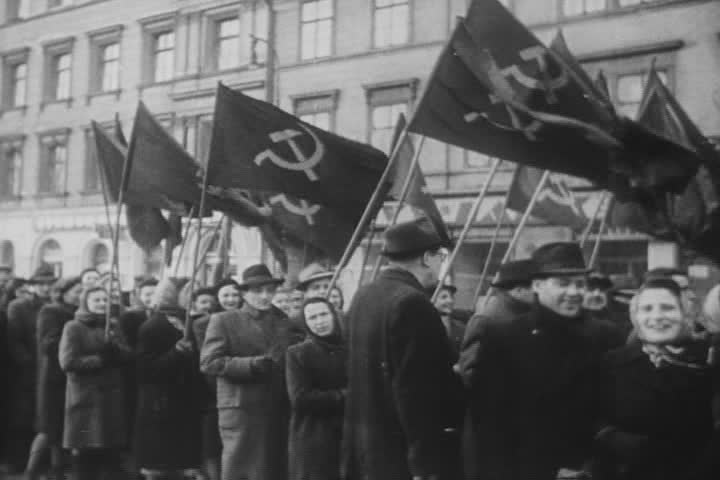 Czechoslovakia was ruled by a Communist regime until the Velvet Revolution of 1989. More immediately, the coup became synonymous with the Cold War. The loss of the last remaining democracy in Eastern Europe came as a profound shock to millions. For the second time in a decade, Western eyes saw Czechoslovak independence and democracy snuffed out by a foreign totalitarian dictatorship intent on dominating the small country (though unlike in 1938–39, the KSČ did most of the "dirty work"). The USSR seemed to have completed the formation of a monolithic Soviet bloc and concluded the partition of Europe, which appeared to vindicate and certainly crystallized the pessimistic, darkest appraisals of Soviet power in the West by people who felt certain that it was folly to try to do business with Moscow. Because its impact was equally profound in Western Europe as in the United States, it helped unify Western countries against the Communist bloc. It gave an air of prescience to the French and Italian governments for having forced their local Communists out of their governments a year earlier. Additionally, it finally discredited Soviet moves to prevent the formation of a West German state and accelerated the construction of a West European alliance, the Treaty of Brussels, the following month; mutual security was the new watchword. Until early 1948, Western and Soviet representatives had communicated in regular meetings at the foreign minister level; the Czech coup constituted a final rupture in relations between the two superpowers, with the West now signaling its determination to commit itself to collective self-defence. By early March, even a previously wavering France was demanding a concrete military alliance with definite promises to help in certain circumstances. From Moscow's point of view, the coup could not have come at a worse time. The government crisis in Prague lasted from 20 to 27 February, just when Western foreign ministers were meeting in London. From the West's perspective, the coup was an example of Communism in its most unacceptable form; Moscow seemed to the West bent on ruthless expansion and the suppression of freedom.

In Italy, elections were scheduled for 18 April and the Communist-dominated Popular Democratic Front stood a realistic chance of victory. In the hysteria and foreboding that gripped Western circles following the Czech coup, it was concluded that similar tactics could be employed in Italy, whose citizens might not even have a chance to vote. British Foreign Minister Ernest Bevin and the British Cabinet saw the cooperation between the two leading parties of the Italian left in almost apocalyptic terms, believing that once the Italian Communist Party (PCI) won power it would marginalise any moderating influence from the socialists. Bevin immediately concluded that the "forces of democratic Socialism" must be strengthened in Italy, and that Britain must support the Christian Democrats, despite all of their faults. Bevin was especially alarmed by the ability of the PCI, through the use of its dominant position in the trade union movement, to organise industrial disturbances not only to sabotage the success of the Marshall Plan, but also to subvert the Italian government through factory committees of action as in Czechoslovakia. The Italian foreign minister, despite his alarm over the coup's timing, remained optimistic, assuring Bevin (who saw Italy as "the immediate danger spot") that the army and police were in excellent shape and that the coup would have an adverse effect, turning swing voters away from the socialists. This was observed when Communist and socialist leaders in Italy defended the Czech coup as a victory for democracy, rationalizing that the violation of civil rights was a necessary and just response to a reactionary threat posed by Western imperialist (i.e., American) interests; such discourse probably damaged the Front's credibility and undercut its promises of moderation. Kennan cabled to suggest the PCI should be outlawed and the U.S. should intervene militarily in the likely event of a civil war, but he quickly softened his line. The American Ambassador in Rome worried that the coup would push self-interested voters to side with what they considered the winning side, and that events in Prague probably increased the PCI's prestige, "directngthe politics of the generally opportunistic Italian toward the Communist bandwagon". However, the coup was one of several factors that led a strong plurality of voters to vote for Christian Democracy and defeat the left. Stalin, satisfied that America had not moved militarily after the Czech coup and unwilling to provoke war, respected the result, considering Italy a Western country. In France, interesting political currents were also set in motion. The United States was still pushing the French government to support German rehabilitation. In the aftermath of the coup, foreign minister Georges Bidault was afraid of stoking anti-German sentiment that the French Communist Party (PCF) could exploit and harness to instigate a coup of its own. At the same time, the coup had forced the hand of PCF leader Maurice Thorez, whose public remarks suggested that in the wake of a Soviet invasion, he would support the Red Army. The Czech coup, the PCF's failed policy of sabotage and the Marshall Plan's likely passage were all beginning to sway French public opinion. 70% of French people now believed the U.S. would do more than any other country to help France, compared to 7% who thought the USSR would do more. Despite French concern about Germany, it was becoming increasingly clear that the Soviet threat was greater than the German. France would still seek an advantageous power position vis-à-vis Germany, but it was becoming reconciled to the prospect of a rehabilitated Germany as part of postwar Europe. Along with passage of the Marshall Plan, the other far-reaching implication of the Czech coup for U.S. foreign policy was to heed Bevin's call for a Western defence association. He had found the Truman Administration reluctant to accept an unambiguous and binding alliance with Western Europe even after the irretrievable breakdown of the Council of Foreign Ministers conference in London in December 1947; Marshall was not prepared to accept the idea in discussions with Bevin that 17 December. On 26 February Bevin again reiterated that the best way to prevent another Czechoslovakia was to evolve a joint Western military strategy, and this time he got a more receptive hearing, especially considering American anxiety over Italy. That spring, European leaders quietly met with U.S. defence, military and diplomatic officials at the Pentagon, under Marshall's orders, exploring a framework for a new and unprecedented association for mutual defence. The following year, NATO would ultimately be born out of these talks.