''Bunyavirales'' is an order of segmented negative-strand RNA viruses with mainly tripartite genomes. Member viruses infect arthropods, plants, protozoans, and vertebrates. It is the only order in the class ''Ellioviricetes''. The name ''Bunyavirales'' derives from Bunyamwera, where the original type species ''Bunyamwera orthobunyavirus'' was first discovered. ''Ellioviricetes'' is named in honor of late virologist Richard M. Elliott for his early work on bunyaviruses. Bunyaviruses belong to the fifth group of the Baltimore classification system, which includes viruses with a negative-sense, single-stranded RNA genome. They have an enveloped, spherical virion. Though generally found in arthropods or rodents, certain viruses in this order occasionally infect humans. Some of them also infect plants. In addition, there is a group of bunyaviruses whose replication is restricted to arthropods and is known as insect-specific bunyaviruses. A majority of bunyaviruses are vector-borne. With the exception of Hantaviruses and Arenaviruses, all viruses in the ''Bunyavirales'' order are transmitted by arthropods (mosquitos, tick, or sandfly). Hantaviruses are transmitted through contact with rodent feces. Incidence of infection is closely linked to vector activity, for example, mosquito-borne viruses are more common in the summer. Human infections with certain members of ''Bunyavirales'', such as ''Crimean-Congo hemorrhagic fever orthonairovirus'', are associated with high levels of morbidity and mortality, consequently handling of these viruses is done in biosafety level 4 laboratories. They are also the cause of severe fever with thrombocytopenia syndrome. Hantaviruses are another medically important member of the order ''Bunyvirales''. They are found worldwide, and are relatively common in Korea, Scandinavia (including Finland), Russia, western North America and parts of South America. Hantavirus infections are associated with high fever, lung edema, and pulmonary failure. The mortality rate varies significantly depending on the form, being up to 50% in New World hantaviruses (the Americas), up to 15% in Old World hantaviruses (Asia and Europe), and as little as 0.1% in Puumala virus (mostly Scandinavia). The antibody reaction plays an important role in decreasing levels of viremia.

Bunyavirus morphology is somewhat similar to that of the ''Paramyxoviridae'' family; ''Bunyavirales'' form enveloped, spherical virions with diameters of 80–120 nm. These viruses contain no matrix proteins.

Bunyaviruses have bi- or tripartite genomes consisting of a large (L) and small(s), or large (L), medium (M), and small (S) RNA segment. These RNA segments are single-stranded, and exist in a helical formation within the virion. Besides, they exhibit a pseudo-circular structure due to each segment's complementary ends. The L segment encodes the RNA-dependent RNA polymerase, necessary for viral RNA replication and mRNA synthesis. The M segment encodes the viral glycoproteins, which project from the viral surface and aid the virus in attaching to and entering the host cell. The S segment encodes the nucleocapsid protein (N). Most bunyaviruses have a negative-sense L and M segment. The S segment of the genus ''Phlebovirus'', and both M and S segment of the genus ''Tospovirus'' are ambisense. Ambisense means that some of the genes on the RNA strand are negative sense and others are positive sense. The ambisense S segment codes for the viral nucleoprotein (N) in the negative sense and a nonstructural protein (NSs) in the positive sense. The ambisense M segment codes for glycoprotein (GP) in the negative sense and a nonstructural protein (NSm) in the positive sense. The total genome size ranges from 10.5 to 22.7 kbp. 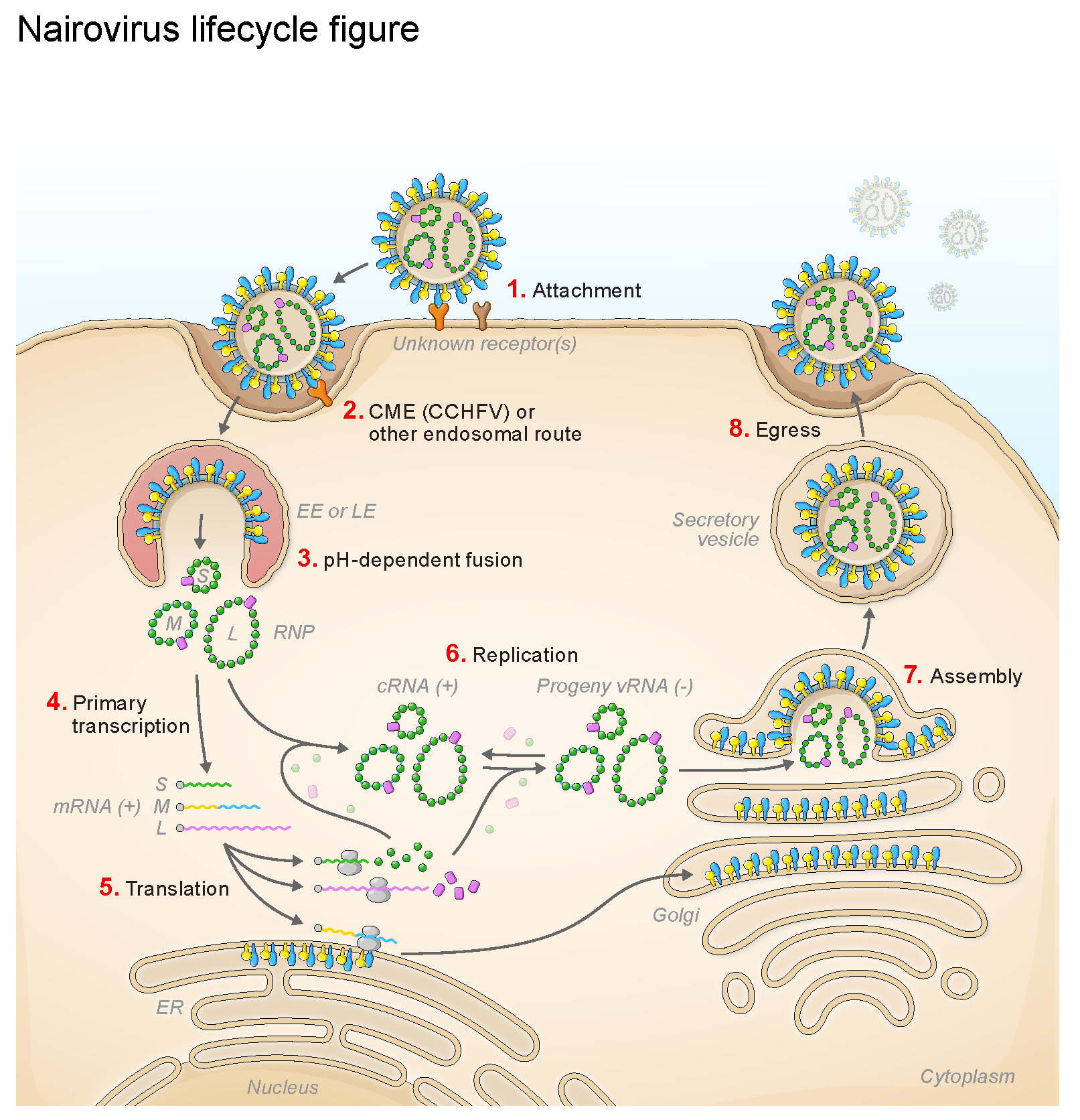 The ambisense genome requires two rounds of transcription to be carried out. First, the negative-sense RNA is transcribed to produce mRNA and a full-length replicative intermediate. From this intermediate, a subgenomic mRNA encoding the small segment nonstructural protein is produced while the polymerase produced following the first round of transcription can now replicate the full-length RNA to produce viral genomes. Bunyaviruses replicate in the cytoplasm, while the viral proteins transit through the ER and Golgi apparatus. Mature virions bud from the Golgi apparatus into vesicles which are transported to the cell surface.

Bunyaviruses infect arthropods, plants, protozoans, and vertebrates. Plants can host bunyaviruses from the families ''Tospoviridae'' and ''Fimoviridae'' (e.g. tomato, pigeonpea, melon, wheat, raspberry, redbud, and rose). Members of some families are insect-specific, for example the phasmavirids, first isolated from phantom midges, and since identified in diverse insects including moths, wasps and bees, and other true flies. 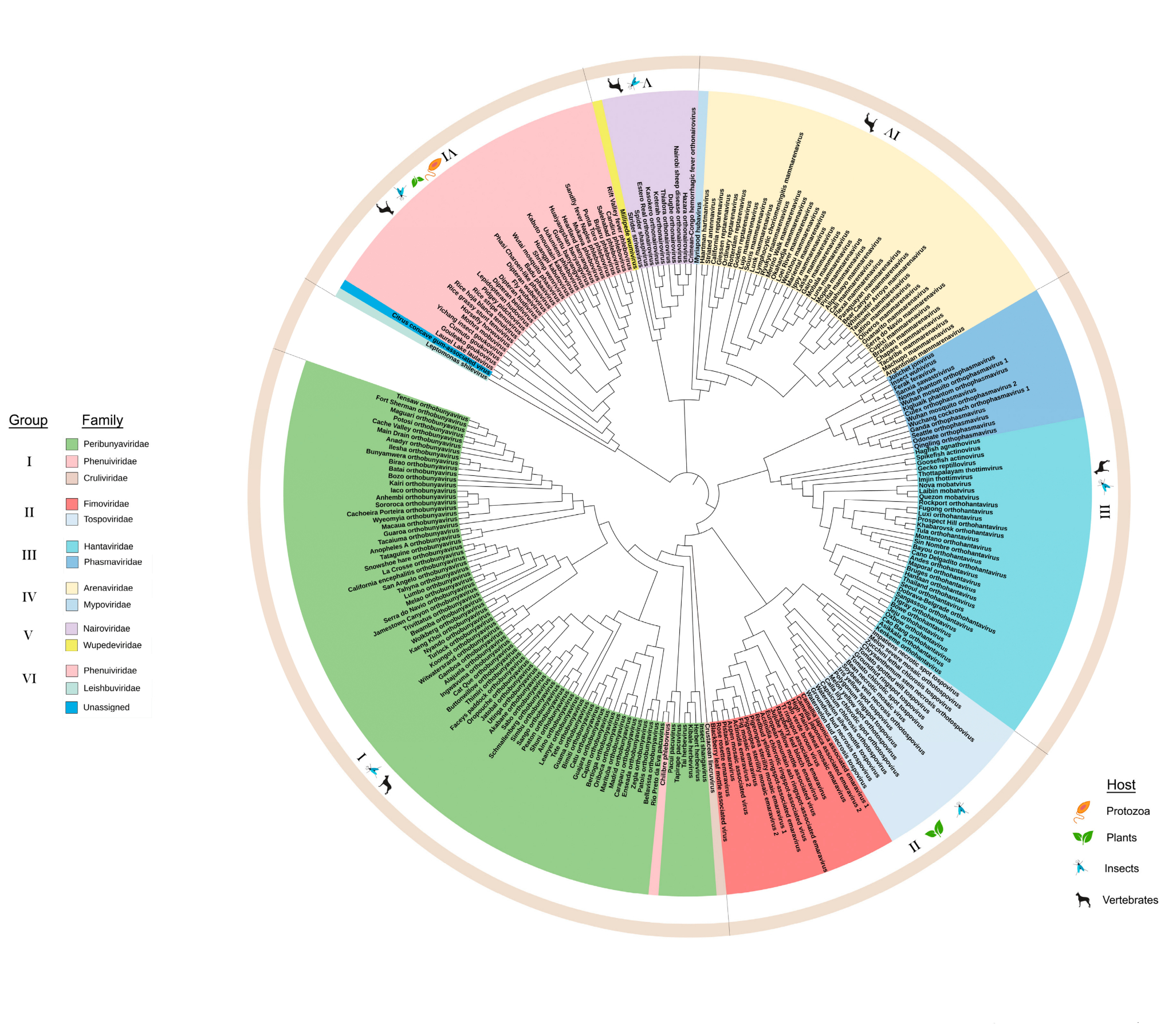 1940s: Crimean–Congo hemorrhagic fever is discovered in Russia 1951: 3,000 cases of Hantavirus were reported in South Korea in 1951, a time when UN forces were fighting on the 38th parallel during the Korean War 1956: Cache Valley virus isolated in ''Culiseta inornata'' mosquitoes in Utah 1960: La Crosse virus was first recognized in a fatal case of encephalitis in La Crosse, Wisconsin 1977: Rift Valley Fever virus caused approximately 200,000 cases and 598 deaths in Egypt 2017: Bunyavirales order is created