The City of Boulder is the Home Rule Municipality that is the county seat and the most populous municipality of Boulder County, Colorado, United States. Boulder is the principal city of the Boulder, CO Metropolitan Statistical Area and is a major city of the Front Range Urban Corridor. The city is located at the base of the foothills of the Rocky Mountains at an elevation of above sea level, located northwest of Denver. Boulder's population is estimated to be 105,673 as of 2019. It is home of the main campus of the University of Colorado, the state's largest university. The city frequently receives high rankings in art, health, well-being, quality of life, and education.

On November 7, 1861, the Colorado General Assembly passed legislation to locate the University of Colorado in Boulder. On September 20, 1875, the first cornerstone was laid for the first building (Old Main) on the CU campus. The university officially opened on September 5, 1877. In 1907, Boulder adopted an anti-saloon ordinance. Statewide prohibition started in Colorado in 1916 and ended with the repeal of national prohibition in 1933.

The city of Boulder is located in the Boulder Valley, where the Rocky Mountains meet the Great Plains. The Flatirons, slabs of sedimentary stone tilted up on the foothills, are located west of the city. The Flatirons are a widely recognized symbol of Boulder. Boulder Creek is the primary flow of water through Boulder. The creek was named prior to the city's founding, for all of the large granite boulders that have cascaded into the creek over the eons. It is from Boulder Creek that Boulder city is believed to have taken its name. Boulder Creek has significant water flow, derived primarily from snow melt and minor springs west of the city. The creek is a tributary of the South Platte River. According to the United States Census Bureau, the city has a total area of . of it is land and of it (3.97%) is water. The 40th parallel (40 degrees north latitude) runs through Boulder and can be easily recognized as Baseline Road today. Boulder lies in a wide basin beneath Flagstaff Mountain just a few miles east of the continental divide and about northwest of Denver. Arapahoe Glacier provides water for the city, along with Boulder Creek, which flows through the center of the city. Denver International Airport is located southeast of Boulder.

Government preservation of open space around Boulder began with the Congress of the United States approving the allocation of of mountain backdrop/watershed extending from South Boulder Creek to Sunshine Canyon in 1899. Since then, Boulder has adopted a policy of controlled urban expansion. In 1959, city voters approved the "Blue Line" city-charter amendment which restricted city water service to altitudes below , in an effort to protect the mountain backdrop from development. In 1967, city voters approved a dedicated sales tax for the acquisition of open space in an effort to contain urban sprawl. In 1970, Boulder created a "comprehensive plan" that would dictate future zoning, transportation, and urban planning decisions. Hoping to preserve residents' views of the mountains, in 1972, the city enacted an ordinance limiting the height of newly constructed buildings. A Historic-Preservation Code was passed in 1974, and a ''residential-growth management'' ordinance (the Danish Plan) in 1976. Effective growth management has resulted in a rapid increase in housing costs with the median home price rising 60% over the period 2010 to 2015 to $648,200.

The City of Boulder has created an Urban Wildlife Management Plan which sets policies for managing and protecting urban wildlife. Also, the city's Parks and Recreation and Open Space and Mountain Parks departments have volunteers who monitor parks (including wetlands, lakes, etc.) to protect ecosystems. From time to time, parks and hiking trails are closed to conserve or restore ecosystems. Traditionally, Boulder has avoided the use of chemical pesticides for controlling the insect population. However, with the threat of West Nile virus, the city began an ''integrative'
plan
to control the mosquito population in 2003 that includes chemical pesticides. Residents can ''opt-out'' of the program by contacting the city and asking that their areas not be sprayed. Under Boulder law, extermination of prairie dogs requires a permit. Also in 2005, the city experimented with using goats for weed control in environmentally sensitive areas. Goats naturally consume diffuse knapweed and Canada thistle, and although the program was not as effective as it was hoped, goats will still be considered in the future weed control projects. In 2010, goats were used to keep weeds under control at the Boulder Reservoir. The city's Open Space and Mountain Parks department manages approximately 8,000 acres of protected forest land west of the city in accordance with a 1999 Forest Ecosystem Management Plan. The plan aims to maintain or enhance native plant and animal species, their communities, and the ecological processes that sustain them and to reduce the wildfire risk to forest and human communities. 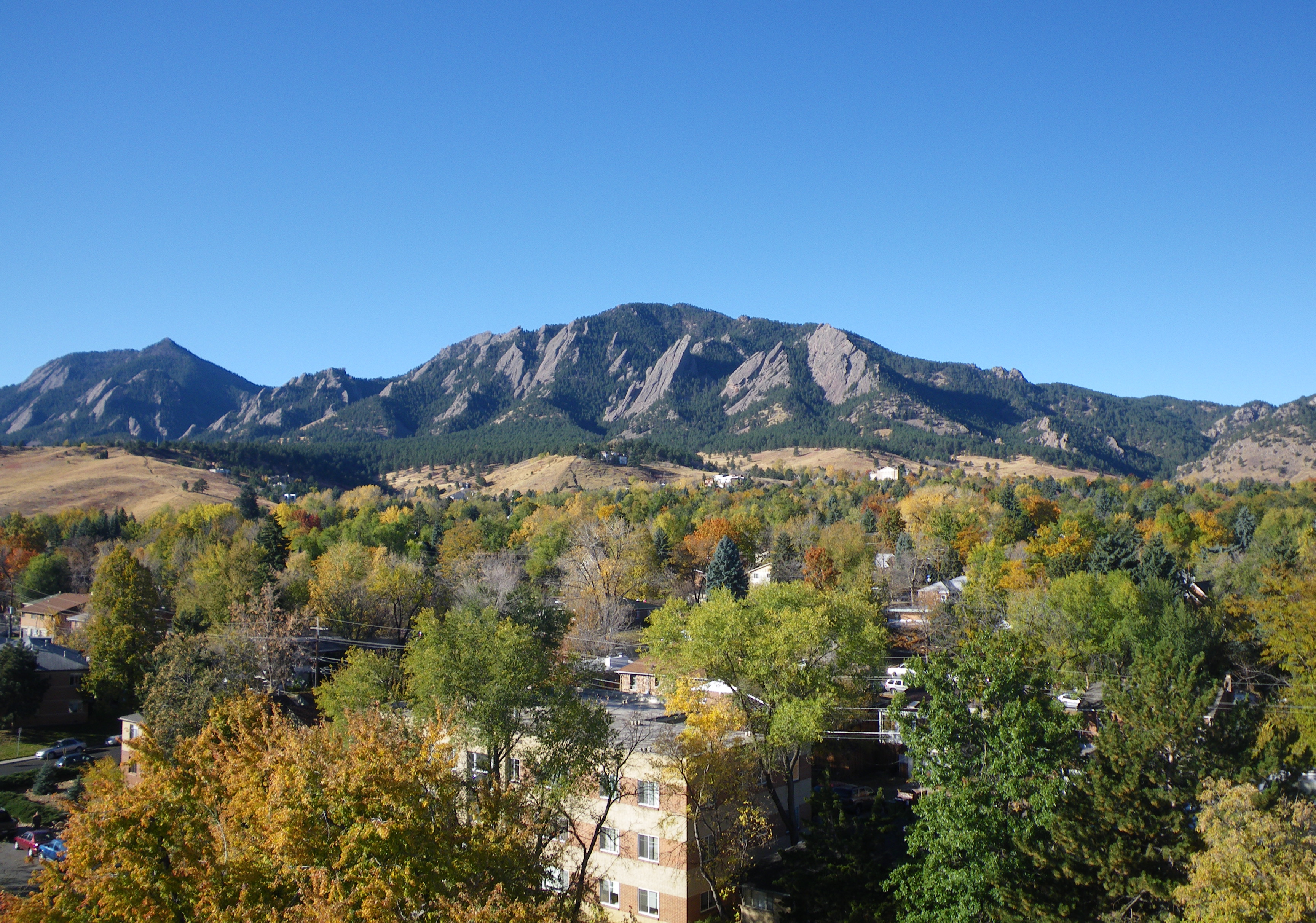 Boulder has a temperate climate typical for much of the state and receives many sunny or mostly sunny days each year. Under the Köppen climate classification, the city is considered semi-arid (Köppen ''BSk'') with some overlap of a humid subtropical climate (Köppen Cfa), due to its relatively high yearly precipation. Winter conditions range from generally mild to the occasional bitterly cold, with highs averaging in the mid to upper 40s °F (7–9 °C). There are 4.6 nights annually when the temperature reaches . Because of orographic lift, the mountains to the west often dry out the air passing over the Front Range, often shielding the city from precipitation in winter, though heavy falls may occur. Snowfall averages per season, but snow depth is usually shallow; a strong warming sun due to the high elevation can quickly melt snow cover during the day, and Chinook winds bring rapid warm-ups throughout the winter months. Summers are warm with frequent afternoon thunderstorms. Roughly 30 days reach or above each year.