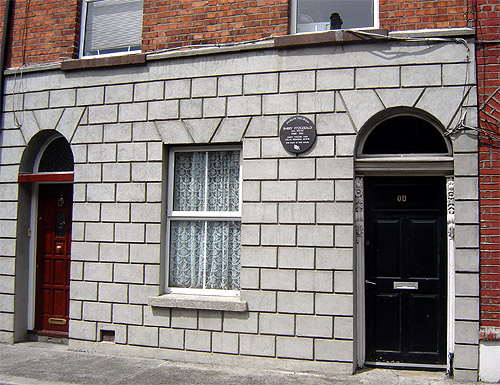 Fitzgerald was born William Joseph Shields in Walworth Road, Portobello, Dublin, Ireland, the son of Fanny Sophia (née Ungerland) and Adolphus Shields. His father was Irish and his mother was German. He was the older brother of Irish actor Arthur Shields. He went to Skerry's College, Dublin, before going on to work in the civil service, starting in 1911 as a junior clerk at the Dublin Board of Trade. He later went to work for the unemployment office. "It was an easy job, full of leisure," he later said.

Fitzgerald was interested in acting and began appearing in amateur dramatic societies such as the Kincora Players. His brother Arthur Shields joined the Abbey in 1915 and Barry would soon join him. He used a stage name so as not to get in trouble with his superiors in the civil service. Fitzgerald's early appearances at the Abbey included bit parts in plays such as ''The Casting Out of Martin Whelan'' and a four-word part in ''The Critic''. His breakthrough performance at the Abbey came in 1919, when he was in ''The Dragon'' by Lady Gregory. However he continued to act part-time until 1929, keeping his job at the civil service during the day. He was in ''The Bribe'', ''An Imaginary Conversation'', ''John Bull's Other Island'' and others. In 1924 his salary at the Abbey was £2'10 a week. That year he appeared in the world premiere of ''Juno and the Paycock'' by famed playwright Seán O'Casey. Fitzgerald played Captain Jack Boyle. In 1925 he starred in ''Paul Twyning'', a performance that was much acclaimed. The following year he was in the premiere of O'Casey's ''The Plough and the Stars'', playing Fluther Good. The play was controversial, causing riots and protests. One night in February 1926 three gunmen turned up to Fitzgerald's mother's house intending to kidnap him and stop the play from going ahead, but they were unable to find him. In 1926 he was in ''The Would-Be Gentleman''. Other appearances at the Abbey included ''The Far Off Hills'', ''Shadow of a Gunman'' and ''The Playboy''. O'Casey wrote a part for Fitzgerald in ''The Silver Tassie'', but the play was rejected by the Abbey. It was picked up for production in London in 1929. Fitzgerald decided to quit his civil service job to join the production and became a full-time actor at the age of 41.

Fitzergald made his film debut in Alfred Hitchcock's version of ''Juno and the Paycock'' (1930), shot in London. In early 1931 he toured England in a production of ''Paul Twyning''. He returned to Ireland in June of that year to perform the play at the Abbey. Between 1931 and 1936, he appeared in three plays by Irish playwright Teresa Deevy''A Disciple'', ''In Search of Valour'' and ''Katie Roche''which were also Abbey Theatre productions. Fitzgerald went to the US with the Abbey Players in 1932 to appear in ''Things That Are Caesar's'' and ''The Far-off Hills''. The Players and Fitzgerald returned to America in 1934 to tour a series of plays in repertory around the country. These included ''The Plough and the Stars'', ''Drama at Inish'', ''The Far-off Hills'', ''Look at the Heffernans'', ''The Playboy of the Western World'', ''The Shadow of the Glen'', ''Church Street'', ''The Well of the Saints'' and ''Juno and the Paycock''. Fitzgerald appeared in a short Irish movie, ''Guests of the Nation'', filmed in 1934 but not released for over seventy years.

''Going My Way'' and stardom

Fitzgerald unexpectedly became a leading man when Leo McCarey cast him opposite Bing Crosby in ''Going My Way'' (1944) as Father Fitzgibbon. The film was a huge success. Fitzgerald was nominated for both the Academy Award for Best Supporting Actor (which he ultimately won) and the Academy Award for Best Actor; voting rules were changed shortly after this occurrence to prevent further dual nominations for the same role. An avid golfer, he later accidentally decapitated his Oscar while practicing his golf swing. During World War II, Oscar statuettes were made of plaster instead of gold-plated bronze to accommodate wartime metal shortages. The Academy provided Fitzgerald with a replacement statuette. ''Going My Way'' was made by Paramount, who signed Fitzgerald to a long-term contract. They put him in a support role in ''I Love a Soldier'' (1944) and he was borrowed by RKO for ''None But the Lonely Heart'' (1944). In March 1944, Fitzgerald was involved in a car accident which resulted in the death of a woman and injury of her daughter. He was charged with manslaughter but acquitted in January 1945 due to lack of evidence. Back at Paramount, Fitzgerald supported Alan Ladd in ''Two Years Before the Mast'', made in 1944 by John Farrow, but not released until 1946. He supported Betty Hutton in ''Incendiary Blonde'' (1945) and ''The Stork Club'' (1945). In between he had a cameo as himself in ''Duffy's Tavern'' (1945) and was borrowed by United Artists to play the lead in ''And Then There Were None'' (1945), based on the novel and play by Agatha Christie. In January 1945 his fee was reported to be $75,000 a film. Fitzgerald did two more movies with John Farrow: ''California'' (1947) with Ray Milland and ''Easy Come, Easy Go'' (1947), where he was top billed. Paramount reunited Fitzgerald with Crosby in ''Welcome Stranger'' (1947) and he did another cameo as himself in ''Variety Girl'' (1947). Mark Hellinger borrowed Fitzgerald to play the lead in a cop film at Universal, ''The Naked City'' (1948) which was a solid success. Back at Paramount he was in ''The Sainted Sisters'' (1948) and ''Miss Tatlock's Millions'' (1948), then did a third film with Crosby, ''Top o' the Morning'' (1949). Fitzgerald went to Warners for ''The Story of Seabiscuit'' (1949) with Shirley Temple, then at Paramount did ''Union Station'' (1950) with William Holden and ''Silver City'' (1951) with Yvonne de Carlo. He made his TV debut with an episode of ''The Ford Theatre Hour'', "The White-Headed Boy" in 1950.

Fitzgerald never married. In Hollywood he shared an apartment with his stand in, Angus D. Taillon, who died in 1953. Fitzgerald returned to live in Dublin in 1959, where he lived at 2 Seafield Ave, Monkstown. In October that year, he underwent brain surgery. He appeared to recover, but in late 1960 he re-entered hospital. He died, as William Joseph Shields, of a heart attack in St Patrick's Hospital, James Street, on 14 January 1961. Fitzgerald has two stars on the Hollywood Walk of Fame, for motion pictures at 6252 Hollywood Boulevard and for television at 7001 Hollywood Boulevard.