In physics, the wavelength is the spatial period of a periodic wave—the distance over which the wave's shape repeats. It is the distance between consecutive corresponding points of the same phase on the wave, such as two adjacent crests, troughs, or zero crossings, and is a characteristic of both traveling waves and standing waves, as well as other spatial wave patterns. The inverse of the wavelength is called the spatial frequency. Wavelength is commonly designated by the Greek letter ''lambda'' (λ). The term ''wavelength'' is also sometimes applied to modulated waves, and to the sinusoidal envelopes of modulated waves or waves formed by interference of several sinusoids. Assuming a sinusoidal wave moving at a fixed wave speed, wavelength is inversely proportional to frequency of the wave: waves with higher frequencies have shorter wavelengths, and lower frequencies have longer wavelengths. Wavelength depends on the medium (for example, vacuum, air, or water) that a wave travels through. Examples of waves are sound waves, light, water waves and periodic electrical signals in a conductor. A sound wave is a variation in air pressure, while in light and other electromagnetic radiation the strength of the electric and the magnetic field vary. Water waves are variations in the height of a body of water. In a crystal lattice vibration, atomic positions vary. The range of wavelengths or frequencies for wave phenomena is called a spectrum. The name originated with the visible light spectrum but now can be applied to the entire electromagnetic spectrum as well as to a sound spectrum or vibration spectrum.

In linear media, any wave pattern can be described in terms of the independent propagation of sinusoidal components. The wavelength ''λ'' of a sinusoidal waveform traveling at constant speed ''v'' is given by : where ''v'' is called the phase speed (magnitude of the phase velocity) of the wave and ''f'' is the wave's frequency. In a dispersive medium, the phase speed itself depends upon the frequency of the wave, making the relationship between wavelength and frequency nonlinear. In the case of electromagnetic radiation—such as light—in free space, the phase speed is the speed of light, about 3×108 m/s. Thus the wavelength of a 100 MHz electromagnetic (radio) wave is about: 3×108 m/s divided by 108 Hz = 3 metres. The wavelength of visible light ranges from deep red, roughly 700 nm, to violet, roughly 400 nm (for other examples, see electromagnetic spectrum). For sound waves in air, the speed of sound is 343 m/s (at room temperature and atmospheric pressure). The wavelengths of sound frequencies audible to the human ear (20 Hz–20 kHz) are thus between approximately 17 m and 17 mm, respectively. Somewhat higher frequencies are used by bats so they can resolve targets smaller than 17 mm. Wavelengths in audible sound are much longer than those in visible light.

A standing wave is an undulatory motion that stays in one place. A sinusoidal standing wave includes stationary points of no motion, called nodes, and the wavelength is twice the distance between nodes. The upper figure shows three standing waves in a box. The walls of the box are considered to require the wave to have nodes at the walls of the box (an example of boundary conditions) determining which wavelengths are allowed. For example, for an electromagnetic wave, if the box has ideal metal walls, the condition for nodes at the walls results because the metal walls cannot support a tangential electric field, forcing the wave to have zero amplitude at the wall. The stationary wave can be viewed as the sum of two traveling sinusoidal waves of oppositely directed velocities. Consequently, wavelength, period, and wave velocity are related just as for a traveling wave. For example, the speed of light can be determined from observation of standing waves in a metal box containing an ideal vacuum.

Traveling sinusoidal waves are often represented mathematically in terms of their velocity ''v'' (in the x direction), frequency ''f'' and wavelength ''λ'' as: : where ''y'' is the value of the wave at any position ''x'' and time ''t'', and ''A'' is the amplitude of the wave. They are also commonly expressed in terms of wavenumber ''k'' (2π times the reciprocal of wavelength) and angular frequency ''ω'' (2π times the frequency) as: : in which wavelength and wavenumber are related to velocity and frequency as: : or : In the second form given above, the phase is often generalized to , by replacing the wavenumber ''k'' with a wave vector that specifies the direction and wavenumber of a plane wave in 3-space, parameterized by position vector r. In that case, the wavenumber ''k'', the magnitude of k, is still in the same relationship with wavelength as shown above, with ''v'' being interpreted as scalar speed in the direction of the wave vector. The first form, using reciprocal wavelength in the phase, does not generalize as easily to a wave in an arbitrary direction. Generalizations to sinusoids of other phases, and to complex exponentials, are also common; see plane wave. The typical convention of using the cosine phase instead of the sine phase when describing a wave is based on the fact that the cosine is the real part of the complex exponential in the wave :

Wavelength can be a useful concept even if the wave is not periodic in space. For example, in an ocean wave approaching shore, shown in the figure, the incoming wave undulates with a varying ''local'' wavelength that depends in part on the depth of the sea floor compared to the wave height. The analysis of the wave can be based upon comparison of the local wavelength with the local water depth.

Waves that are sinusoidal in time but propagate through a medium whose properties vary with position (an ''inhomogeneous'' medium) may propagate at a velocity that varies with position, and as a result may not be sinusoidal in space. The figure at right shows an example. As the wave slows down, the wavelength gets shorter and the amplitude increases; after a place of maximum response, the short wavelength is associated with a high loss and the wave dies out. The analysis of differential equations of such systems is often done approximately, using the ''WKB method'' (also known as the ''Liouville–Green method''). The method integrates phase through space using a local wavenumber, which can be interpreted as indicating a "local wavelength" of the solution as a function of time and space. This method treats the system locally as if it were uniform with the local properties; in particular, the local wave velocity associated with a frequency is the only thing needed to estimate the corresponding local wavenumber or wavelength. In addition, the method computes a slowly changing amplitude to satisfy other constraints of the equations or of the physical system, such as for conservation of energy in the wave.

Waves in crystalline solids are not continuous, because they are composed of vibrations of discrete particles arranged in a regular lattice. This produces aliasing because the same vibration can be considered to have a variety of different wavelengths, as shown in the figure. Descriptions using more than one of these wavelengths are redundant; it is conventional to choose the longest wavelength that fits the phenomenon. The range of wavelengths sufficient to provide a description of all possible waves in a crystalline medium corresponds to the wave vectors confined to the Brillouin zone. This indeterminacy in wavelength in solids is important in the analysis of wave phenomena such as energy bands and lattice vibrations. It is mathematically equivalent to the aliasing of a signal that is sampled at discrete intervals. 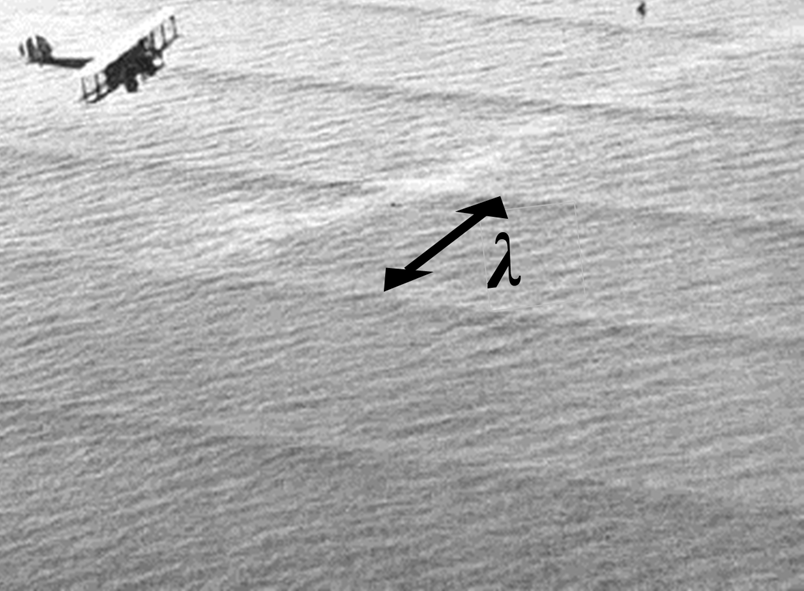 The concept of wavelength is most often applied to sinusoidal, or nearly sinusoidal, waves, because in a linear system the sinusoid is the unique shape that propagates with no shape change – just a phase change and potentially an amplitude change. The wavelength (or alternatively wavenumber or wave vector) is a characterization of the wave in space, that is functionally related to its frequency, as constrained by the physics of the system. Sinusoids are the simplest traveling wave solutions, and more complex solutions can be built up by superposition. In the special case of dispersion-free and uniform media, waves other than sinusoids propagate with unchanging shape and constant velocity. In certain circumstances, waves of unchanging shape also can occur in nonlinear media; for example, the figure shows ocean waves in shallow water that have sharper crests and flatter troughs than those of a sinusoid, typical of a cnoidal wave, a traveling wave so named because it is described by the Jacobi elliptic function of ''m''-th order, usually denoted as . Large-amplitude ocean waves with certain shapes can propagate unchanged, because of properties of the nonlinear surface-wave medium.

If a traveling wave has a fixed shape that repeats in space or in time, it is a ''periodic wave''. Such waves are sometimes regarded as having a wavelength even though they are not sinusoidal. As shown in the figure, wavelength is measured between consecutive corresponding points on the waveform.

Localized wave packets, "bursts" of wave action where each wave packet travels as a unit, find application in many fields of physics. A wave packet has an ''envelope'' that describes the overall amplitude of the wave; within the envelope, the distance between adjacent peaks or troughs is sometimes called a ''local wavelength''. An example is shown in the figure. In general, the ''envelope'' of the wave packet moves at a speed different from the constituent waves. Using Fourier analysis, wave packets can be analyzed into infinite sums (or integrals) of sinusoidal waves of different wavenumbers or wavelengths. Louis de Broglie postulated that all particles with a specific value of momentum ''p'' have a wavelength ''λ = h/p'', where ''h'' is Planck's constant. This hypothesis was at the basis of quantum mechanics. Nowadays, this wavelength is called the de Broglie wavelength. For example, the electrons in a CRT display have a De Broglie wavelength of about 10−13 m. To prevent the wave function for such a particle being spread over all space, de Broglie proposed using wave packets to represent particles that are localized in space. The spatial spread of the wave packet, and the spread of the wavenumbers of sinusoids that make up the packet, correspond to the uncertainties in the particle's position and momentum, the product of which is bounded by Heisenberg uncertainty principle.