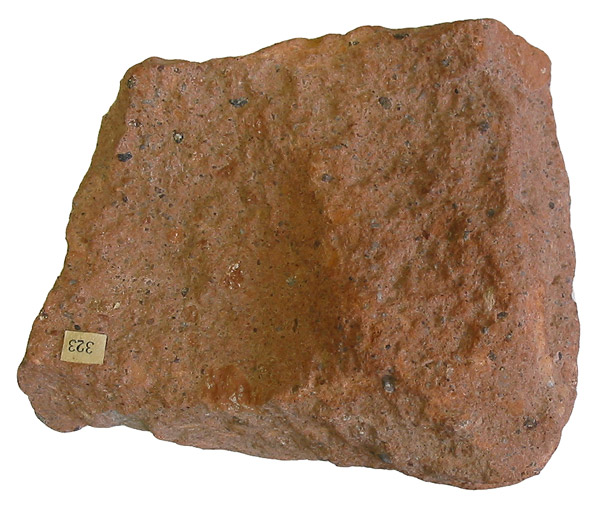 Volcanic rock (often shortened to volcanics in scientific contexts) is a rock formed from lava erupted from a volcano. In other words, it differs from other igneous rock by being of volcanic origin. Like all rock types, the concept of volcanic rock is artificial, and in nature volcanic rocks grade into hypabyssal and metamorphic rocks and constitute an important element of some sediments and sedimentary rocks. For these reasons, in geology, volcanics and shallow hypabyssal rocks are not always treated as distinct. In the context of Precambrian shield geology, the term "volcanic" is often applied to what are strictly metavolcanic rocks. Volcanic rocks and sediment that form from magma erupted into the air are called "volcaniclastics," and these are technically sedimentary rocks. Volcanic rocks are among the most common rock types on Earth's surface, particularly in the oceans. On land, they are very common at plate boundaries and in flood basalt provinces. It has been estimated that volcanic rocks cover about 8% of the Earth's current land surface.

Volcanic rocks are usually fine-grained or aphanitic to glass in texture. They often contain clasts of other rocks and phenocrysts. Phenocrysts are crystals that are larger than the matrix and are identifiable with the unaided eye. Rhomb porphyry is an example with large rhomb shaped phenocrysts embedded in a very fine grained matrix. Volcanic rocks often have a vesicular texture caused by voids left by volatiles trapped in the molten lava. Pumice is a highly vesicular rock produced in explosive volcanic eruptions.

Most modern petrologists classify igneous rocks, including volcanic rocks, by their chemistry when dealing with their origin. The fact that different mineralogies and textures may be developed from the same initial magmas has led petrologists to rely heavily on chemistry to look at a volcanic rock's origin.

The chemical classification of igneous rocks is based first on the total content of silicon and alkali metals (sodium and potassium) expressed as weight fraction of silica and alkali oxides (K2O plus Na2O). These place the rock in one of the fields of the TAS diagram. Ultramafic rock and carbonatites have their own specialized classification, but these rarely occur as volcanic rocks. Some fields of the TAS diagram are further subdivided by the ratio of potassium oxide to sodium oxide. Additional classifications may be made on the basis of other components,such as aluminum or iron content. Volcanic rocks are also broadly divided into subalkaline, alkaline, and peralkaline volcanic rocks. Subalkaline rocks are defined as rocks in which SiO2 < -3.3539 × 10−4 × A6 + 1.2030 × 10−2 × A5 - 1.5188 × 10−1 × A4 + 8.6096 × 10−1 × A3 - 2.1111 × A2 + 3.9492 × A + 39.0 where both silica and total alkali oxide content (A) are expressed as molar fraction. Because the TAS diagram uses weight fraction and the boundary between alkaline and subalkaline rock is defined in terms of molar fraction, the position of this curve on the TAS diagram is only approximate. Peralkaline volcanic rocks are defined as rocks having Na2O + K2O > Al2O3, so that some of the alkali oxides must be present as aegirine or sodic amphibole rather than feldspar. The chemistry of volcanic rocks is dependent on two things: the initial composition of the primary magma and the subsequent differentiation. Differentiation of most magmas tends to increase the silica (SiO2) content, mainly by crystal fractionation. The initial composition of most magmas is basaltic, albeit small differences in initial compositions may result in multiple differentiation series. The most common of these series are the tholeiitic, calc-alkaline, and alkaline.

Most volcanic rocks share a number of common minerals. Differentiation of volcanic rocks tends to increase the silica (SiO2) content mainly by fractional crystallization. Thus, more evolved volcanic rocks tend to be richer in minerals with a higher amount of silica such as phyllo and tectosilicates including the feldspars, quartz polymorphs and muscovite. While still dominated by silicates, more primitive volcanic rocks have mineral assemblages with less silica, such as olivine and the pyroxenes. Bowen's reaction series correctly predicts the order of formation of the most common minerals in volcanic rocks. Occasionally, a magma may pick up crystals that crystallized from another magma; these crystals are called xenocrysts. Diamonds found in kimberlites are rare but well-known xenocrysts; the kimberlites do not create the diamonds, but pick them up and transport them to the surface of the Earth.

An aphanitic volcanic sand grain, with fine-grained groundmass, as seen under a petrographic microscope

Volcanic rocks are named according to both their chemical composition and texture. Basalt is a very common volcanic rock with low silica content. Rhyolite is a volcanic rock with high silica content. Rhyolite has silica content similar to that of granite while basalt is compositionally equal to gabbro. Intermediate volcanic rocks include andesite, dacite, trachyte, and latite. Pyroclastic rocks are the product of explosive volcanism. They are often felsic (high in silica). Pyroclastic rocks are often the result of volcanic debris, such as ash, bombs and tephra, and other volcanic ejecta. Examples of pyroclastic rocks are tuff and ignimbrite. Shallow intrusions, which possess structure similar to volcanic rather than plutonic rocks, are also considered to be volcanic, shading into subvolcanic. The terms lava stone and lava rock are more used by marketers than geologists, who would likely say "volcanic rock" (because lava is a molten liquid and rock is solid). "Lava stone" may describe anything from a friable silicic pumice to solid mafic flow basalt, and is sometimes used to describe rocks that were never lava, but look as if they were (such as sedimentary limestone with dissolution pitting). To convey anything about the physical or chemical properties of the rock, a more specific term should be used; a good supplier will know what sort of volcanic rock they are selling.