Trilobites (; meaning "three lobes") are a group of extinct marine artiopodan arthropods that form the class Trilobita. Trilobites form one of the earliest-known groups of arthropods. The first appearance of trilobites in the fossil record defines the base of the Atdabanian stage of the Early Cambrian period (), and they flourished throughout the lower Paleozoic before slipping into a long decline, when, during the Devonian, all trilobite orders except the Proetida died out. The last extant trilobites finally disappeared in the mass extinction at the end of the Permian about 252 million years ago. Trilobites were among the most successful of all early animals, existing in oceans for almost 300 million years. By the time trilobites first appeared in the fossil record, they were already highly diversified and geographically dispersed. Because trilobites had wide diversity and an easily fossilized exoskeleton, they left an extensive fossil record. The study of their fossils has facilitated important contributions to biostratigraphy, paleontology, evolutionary biology, and plate tectonics. Trilobites are often placed within the arthropod subphylum Schizoramia within the superclass Arachnomorpha (equivalent to the Arachnata), although several alternative taxonomies are found in the literature. More recently they have been placed within the Artiopoda, which includes many organisms that are morphologically similar to trilobites, but are largely unmineralised. Trilobites had many lifestyles; some moved over the seabed as predators, scavengers, or filter feeders, and some swam, feeding on plankton. Some even crawled onto land. Most lifestyles expected of modern marine arthropods are seen in trilobites, with the possible exception of parasitism (where scientific debate continues). Some trilobites (particularly the family Olenidae) are even thought to have evolved a symbiotic relationship with sulfur-eating bacteria from which they derived food. The largest trilobites were more than long and may have weighed as much as .

Trilobites made a sudden appearance in the fossil record. There appears to be a considerable evolutionary gap from possible earlier precursors such as ''Spriggina'', which is found in the 550-million-year-old Ediacaran-age rocks of Australia, and thus predates trilobites by some 30 million years. The heat of the Cambrian sea may have contributed to trilobite emergence. However, evidence does suggest that significant diversification had already occurred before trilobites were preserved in the fossil record, allowing for the "sudden" appearance of diverse trilobite groups with complex derived characteristics (e.g. eyes). Morphological similarities between trilobites and earlier arthropod-like creatures such as ''Spriggina'', ''Parvancorina'', and other "trilobitomorphs" of the Ediacaran period of the Precambrian are ambiguous enough to make a detailed analysis of their ancestry complex. Morphological similarities between early trilobites and other Cambrian arthropods (e.g. the Burgess shale fauna and the Maotianshan shales fauna) make analysis of ancestral relationships difficult as well.

The earliest trilobites known from the fossil record are redlichiids and ptychopariid bigotinids dated to some . Contenders for the earliest trilobites include ''Profallotaspis jakutensis'' (Siberia), ''Fritzaspis'' spp. (western USA), ''Hupetina antiqua'' (Morocco) and ''Serrania gordaensis'' (Spain). All trilobites are thought to have originated in present-day Siberia, with subsequent distribution and radiation from this location. All Olenellina lack facial sutures (see below), and this is thought to represent the original state. The earliest sutured trilobite found so far (''Lemdadella''), occurs almost at the same time as the earliest Olenellina, suggesting the trilobites origin lies before the start of the Atdabanian, but without leaving fossils. Other groups show secondary lost facial sutures, such as all Agnostina and some Phacopina. Another common feature of the Olenellina also suggests this suborder to be the ancestral trilobite stock: early protaspid stages have not been found, supposedly because these were not calcified, and this also is supposed to represent the original state. Earlier trilobites may be found and could shed more light on the origin of trilobites. Three specimens of a trilobite from Morocco, ''Megistaspis hammondi'', dated 478 million years old contain fossilized soft parts.

Trilobites saw incredible diversification over time. For such a long-lasting group of animals, it is no surprise that trilobite evolutionary history is marked by a number of extinction events where some groups perished and surviving groups diversified to fill ecological niches with comparable or unique adaptations. Generally, trilobites maintained high diversity levels throughout the Cambrian and Ordovician periods before entering a drawn-out decline in the Devonian, culminating in the final extinction of the last few survivors at the end of the Permian period.

Principal evolutionary trends from primitive morphologies, such as exemplified by ''Eoredlichia'', include the origin of new types of eyes, improvement of enrollment and articulation mechanisms, increased size of pygidium (micropygy to isopygy), and development of extreme spinosity in certain groups. Changes also included narrowing of the thorax and increasing or decreasing numbers of thoracic segments. Specific changes to the cephalon are also noted; variable glabella size and shape, position of eyes and facial sutures, and hypostome specialization. Several morphologies appeared independently within different major taxa (e.g. eye reduction or miniaturization). Effacement, the loss of surface detail in the cephalon, pygidium, or the thoracic furrows, is also a common evolutionary trend. Notable examples of this were the orders Agnostida and Asaphida, and the suborder Illaenina of the Corynexochida. Effacement is believed to be an indication of either a burrowing lifestyle or a pelagic one. Effacement poses a problem for taxonomists since the loss of details (particularly of the glabella) can make the determination of phylogenetic relationships difficult.

Phylogenetic biogeographic analysis of Early Cambrian Olenellidae and Redlichiidae suggests that a uniform trilobite fauna existed over Laurentia, Gondwana, and Siberia before the tectonic breakup of the supercontinent Pannotia between 600 and . Tectonic breakup of Pannotia then allowed for the diversification and radiation expressed later in the Cambrian as the distinctive Olenellid province (Laurentia, Siberia, and Baltica) and the separate Redlichid province (Australia, Antarctica, and China). Breakup of Pannotia significantly antedates the first appearance of trilobites in the fossil record, supporting a long and cryptic development of trilobites extending perhaps as far back as or possibly further back in time. 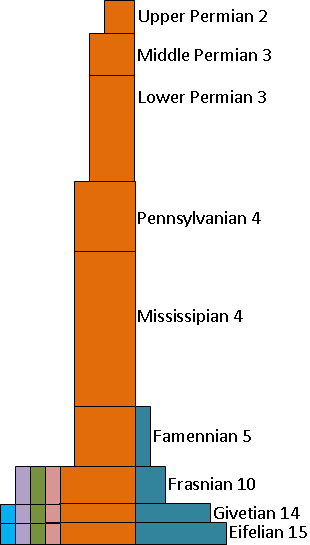 Most Early Silurian families constitute a subgroup of the Late Ordovician fauna. Few, if any, of the dominant Early Ordovician fauna survived to the end of the Ordovician, yet 74% of the dominant Late Ordovician trilobite fauna survived the Ordovician. Late Ordovician survivors account for all post-Ordovician trilobite groups except the Harpetida. Silurian and Devonian trilobite assemblages are superficially similar to Ordovician assemblages, dominated by Lichida and Phacopida (including the well-known Calymenina). A number of characteristic forms do not extend far into the Devonian and almost all the remainder were wiped out by a series of dramatic Middle and Late Devonian extinctions. Three orders and all but five families were exterminated by the combination of sea level changes and a break in the redox equilibrium (a meteorite impact has also been suggested as a cause). Only a single order, the Proetida, survived into the Carboniferous. Genera of trilobites during the Silurian and Devonian periods include: *''Dalmanites'' (Early to Late Silurian) *''Calymene'' (Silurian) *''Encrinurus'' (Silurian) *''Exallaspis'' (Middle to Late Silurian) *''Paralejurus'' (Early Devonian) *''Lioharpes'' (Middle Devonian) *''Phacops'' (Middle to Late Devonian)

Exactly why the trilobites became extinct is not clear; with repeated extinction events (often followed by apparent recovery) throughout the trilobite fossil record, a combination of causes is likely. After the extinction event at the end of the Devonian period, what trilobite diversity remained was bottlenecked into the order Proetida. Decreasing diversity of genera limited to shallow-water shelf habitats coupled with a drastic lowering of sea level (regression) meant that the final decline of trilobites happened shortly before the end of the Permian mass extinction event. With so many marine species involved in the Permian extinction, the end of nearly 300 million successful years for the trilobites would not have been unexpected at the time. Trilobites have no known direct descendants. Their closest living relatives would be the chelicerates. Though horseshoe crabs are often cited as their closest living relatives, they are no closer evolutionarily than other cheliceratans.