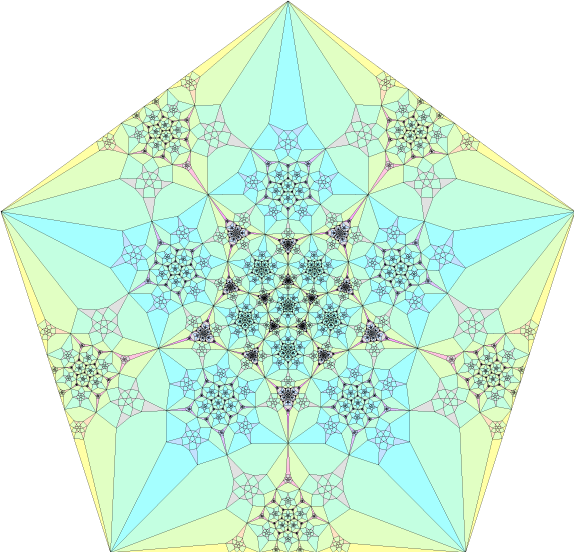 Symmetry (from Greek συμμετρία ''symmetria'' "agreement in dimensions, due proportion, arrangement") in everyday language refers to a sense of harmonious and beautiful proportion and balance. In mathematics, "symmetry" has a more precise definition, and is usually used to refer to an object that is invariant under some transformations; including translation, reflection, rotation or scaling. Although these two meanings of "symmetry" can sometimes be told apart, they are intricately related, and hence are discussed together in this article. Mathematical symmetry may be observed with respect to the passage of time; as a spatial relationship; through geometric transformations; through other kinds of functional transformations; and as an aspect of abstract objects, including theoretic models, language, and music. This article describes symmetry from three perspectives: in mathematics, including geometry, the most familiar type of symmetry for many people; in science and nature; and in the arts, covering architecture, art and music. The opposite of symmetry is asymmetry, which refers to the absence or a violation of symmetry.

A geometric shape or object is symmetric if it can be divided into two or more identical pieces that are arranged in an organized fashion. This means that an object is symmetric if there is a transformation that moves individual pieces of the object, but doesn't change the overall shape. The type of symmetry is determined by the way the pieces are organized, or by the type of transformation: * An object has reflectional symmetry (line or mirror symmetry) if there is a line (or in 3D a plane) going through it which divides it into two pieces that are mirror images of each other. *An object has rotational symmetry if the object can be rotated about a fixed point (or in 3D about a line) without changing the overall shape. *An object has translational symmetry if it can be translated (moving every point of the object by the same distance) without changing its overall shape. *An object has helical symmetry if it can be simultaneously translated and rotated in three-dimensional space along a line known as a screw axis. *An object has scale symmetry if it does not change shape when it is expanded or contracted. Fractals also exhibit a form of scale symmetry, where smaller portions of the fractal are similar in shape to larger portions. *Other symmetries include glide reflection symmetry (a reflection followed by a translation) and rotoreflection symmetry (a combination of a rotation and a reflection).

Other areas of mathematics

Generalizing from geometrical symmetry in the previous section, one can say that a mathematical object is ''symmetric'' with respect to a given mathematical operation, if, when applied to the object, this operation preserves some property of the object. The set of operations that preserve a given property of the object form a group. In general, every kind of structure in mathematics will have its own kind of symmetry. Examples include even and odd functions in calculus, symmetric groups in abstract algebra, symmetric matrices in linear algebra, and Galois groups in Galois theory. In statistics, symmetry also manifests as symmetric probability distributions, and as skewness—the asymmetry of distributions.

In science and nature

Symmetry in physics has been generalized to mean invariance—that is, lack of change—under any kind of transformation, for example arbitrary coordinate transformations. This concept has become one of the most powerful tools of theoretical physics, as it has become evident that practically all laws of nature originate in symmetries. In fact, this role inspired the Nobel laureate PW Anderson to write in his widely read 1972 article ''More is Different'' that "it is only slightly overstating the case to say that physics is the study of symmetry." See Noether's theorem (which, in greatly simplified form, states that for every continuous mathematical symmetry, there is a corresponding conserved quantity such as energy or momentum; a conserved current, in Noether's original language); and also, Wigner's classification, which says that the symmetries of the laws of physics determine the properties of the particles found in nature. Important symmetries in physics include continuous symmetries and discrete symmetries of spacetime; internal symmetries of particles; and supersymmetry of physical theories.

In biology, the notion of symmetry is mostly used explicitly to describe body shapes. Bilateral animals, including humans, are more or less symmetric with respect to the sagittal plane which divides the body into left and right halves. Animals that move in one direction necessarily have upper and lower sides, head and tail ends, and therefore a left and a right. The head becomes specialized with a mouth and sense organs, and the body becomes bilaterally symmetric for the purpose of movement, with symmetrical pairs of muscles and skeletal elements, though internal organs often remain asymmetric. Plants and sessile (attached) animals such as sea anemones often have radial or rotational symmetry, which suits them because food or threats may arrive from any direction. Fivefold symmetry is found in the echinoderms, the group that includes starfish, sea urchins, and sea lilies. In biology, the notion of symmetry is also used as in physics, that is to say to describe the properties of the objects studied, including their interactions. A remarkable property of biological evolution is the changes of symmetry corresponding to the appearance of new parts and dynamics.

Symmetry is important to chemistry because it undergirds essentially all ''specific'' interactions between molecules in nature (i.e., via the interaction of natural and human-made chiral molecules with inherently chiral biological systems). The control of the symmetry of molecules produced in modern chemical synthesis contributes to the ability of scientists to offer therapeutic interventions with minimal side effects. A rigorous understanding of symmetry explains fundamental observations in quantum chemistry, and in the applied areas of spectroscopy and crystallography. The theory and application of symmetry to these areas of physical science draws heavily on the mathematical area of group theory.

In psychology and neuroscience

For a human observer, some symmetry types are more salient than others, in particular the most salient is a reflection with a vertical axis, like that present in the human face. Ernst Mach made this observation in his book "The analysis of sensations" (1897), and this implies that perception of symmetry is not a general response to all types of regularities. Both behavioural and neurophysiological studies have confirmed the special sensitivity to reflection symmetry in humans and also in other animals. Early studies within the Gestalt tradition suggested that bilateral symmetry was one of the key factors in perceptual grouping. This is known as the Law of Symmetry. The role of symmetry in grouping and figure/ground organization has been confirmed in many studies. For instance, detection of reflectional symmetry is faster when this is a property of a single object. Studies of human perception and psychophysics have shown that detection of symmetry is fast, efficient and robust to perturbations. For example, symmetry can be detected with presentations between 100 and 150 milliseconds. More recent neuroimaging studies have documented which brain regions are active during perception of symmetry. Sasaki et al. used functional magnetic resonance imaging (fMRI) to compare responses for patterns with symmetrical or random dots. A strong activity was present in extrastriate regions of the occipital cortex but not in the primary visual cortex. The extrastriate regions included V3A, V4, V7, and the lateral occipital complex (LOC). Electrophysiological studies have found a late posterior negativity that originates from the same areas. In general, a large part of the visual system seems to be involved in processing visual symmetry, and these areas involve similar networks to those responsible for detecting and recognising objects.

People observe the symmetrical nature, often including asymmetrical balance, of social interactions in a variety of contexts. These include assessments of reciprocity, empathy, sympathy, apology, dialogue, respect, justice, and revenge. Reflective equilibrium is the balance that may be attained through deliberative mutual adjustment among general principles and specific judgments. Symmetrical interactions send the moral message "we are all the same" while asymmetrical interactions may send the message "I am special; better than you." Peer relationships, such as can be governed by the golden rule, are based on symmetry, whereas power relationships are based on asymmetry. Symmetrical relationships can to some degree be maintained by simple (game theory) strategies seen in symmetric games such as tit for tat.

It exists a list of journals and newsletters known to deal, at least for a part, with symmetry and arts.

Symmetry finds its ways into architecture at every scale, from the overall external views of buildings such as Gothic cathedrals and The White House, through the layout of the individual floor plans, and down to the design of individual building elements such as tile mosaics. Islamic buildings such as the Taj Mahal and the Lotfollah mosque make elaborate use of symmetry both in their structure and in their ornamentation. Moorish buildings like the Alhambra are ornamented with complex patterns made using translational and reflection symmetries as well as rotations. It has been said that only bad architects rely on a "symmetrical layout of blocks, masses and structures"; Modernist architecture, starting with International style, relies instead on "wings and balance of masses".