A stream is a body of water with surface water flowing within the bed and banks of a channel. The flow of a stream is controlled by three inputs – surface water, subsurface water and groundwater. The surface and subsurface water are highly variable between periods of rainfall. Groundwater, on the other hand, has a relatively constant input and is controlled more by long-term patterns of precipitation. The stream encompasses surface, subsurface and groundwater fluxes that respond to geological, geomorphological, hydrological and biotic controls. Depending on its location or certain characteristics, a stream may be referred to by a variety of local or regional names. Long large streams are usually called rivers. Streams are important as conduits in the water cycle, instruments in groundwater recharge, and corridors for fish and wildlife migration. The biological habitat in the immediate vicinity of a stream is called a riparian zone. Given the status of the ongoing Holocene extinction, streams play an important corridor role in connecting fragmented habitats and thus in conserving biodiversity. The study of streams and waterways in general is known as ''surface hydrology'' and is a core element of environmental geography. 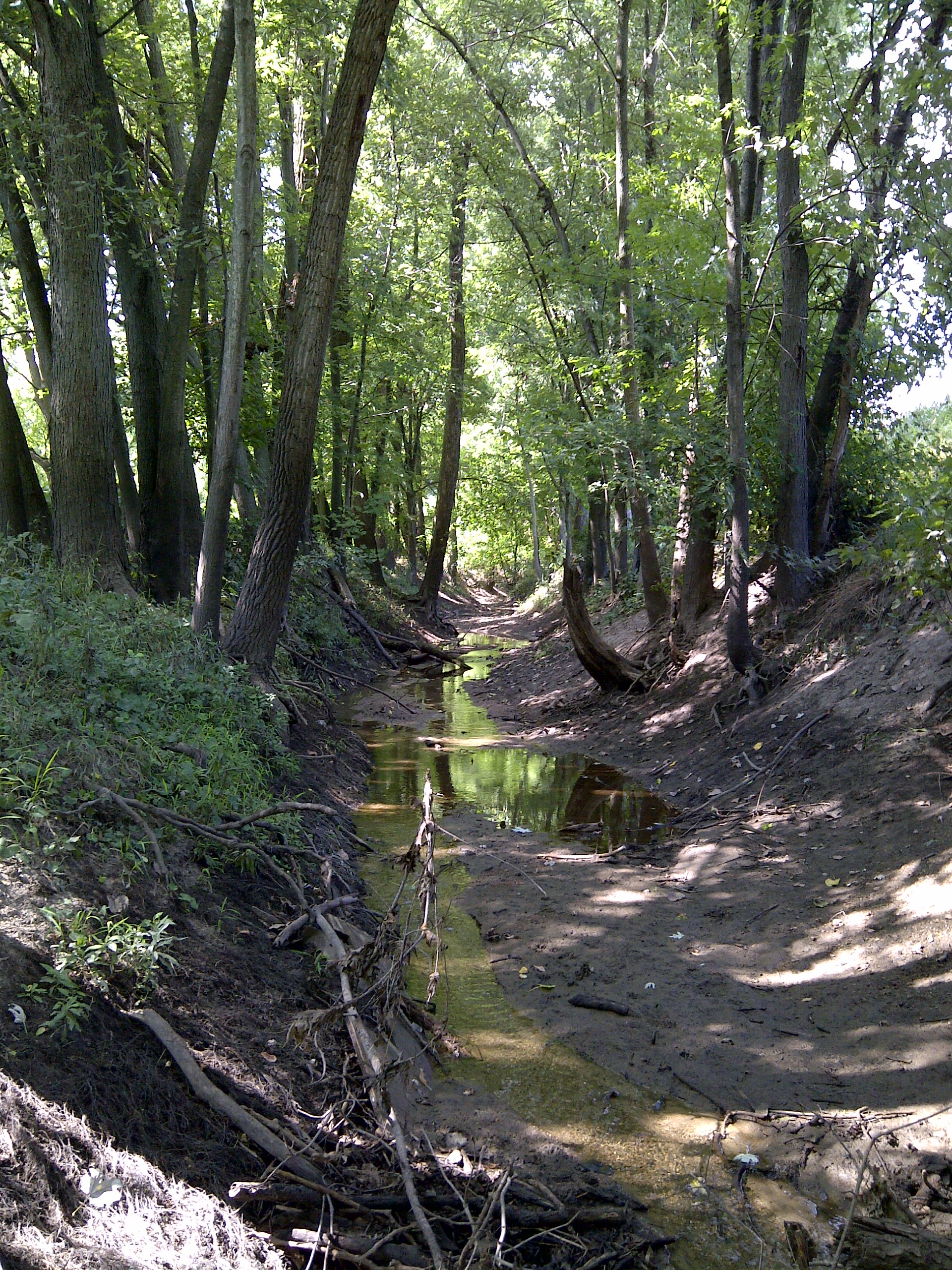 A stream smaller than a creek, especially one that is fed by a spring_or_[[Seep_(hydrology)">seep._It_is_usually_small_and_easily_[[ford_(river).html" style="text-decoration: none;"class="mw-redirect" title="spring (hydrosphere)">spring or [[Seep (hydrology)">seep. It is usually small and easily [[ford (river)">forded. A brook is characterised by its shallowness.

A creek () or crick (): * In Australia, Canada, New Zealand, and the United States, a (narrow) stream that is smaller than a river; a minor tributary of a river; brook. Sometimes navigable by motor craft and may be intermittent. * In parts of [[Maryland, [[New England, the UK and India, a [[tide|tidal [[inlet, typically in a [[salt marsh or [[Mangrove|mangrove swamp, or between enclosed and drained former salt marshes or swamps (e.g. [[Port Creek separating Portsea Island from the mainland). In these cases, the stream is the tidal stream, the course of the seawater through the creek channel at low and high tide.

A large natural stream, which may be a waterway.

The linear channel between the parallel ridges or bars on a shoreline beach or river floodplain, or between a bar and the shore. Also called a swale.

A tributary is a contributory stream, or a stream which does not reach a static body of water such as a lake or ocean, but joins another river (a parent river). Sometimes also called a branch or fork.

There are a number of regional names for a stream.

* ''Allt'' is used in the Scottish Highlands. * ''Beck'' is used in Lincolnshire to Cumbria in areas which were once occupied by the Danes and Norwegians. * ''Bourne'' or ''winterbourne'' is used in the chalk downland of southern England for ephemeral rivers. When permanent, they are ''chalk streams''. * ''Brook''. * ''Burn'' is used in Scotland and North East England. * ''Gill'' or ''ghyll'' is seen in the north of England and Kent and Surrey influenced by Old Norse. The variant "ghyll" is used in the Lake District and appears to have been an invention of William Wordsworth. * ''Nant'' is used in Wales. * '' Rivulet'' is a term encountered in Victorian era publications. * ''Stream'' * ''Syke'' is used in lowland Scotland and Cumbria for a seasonal stream.

* ''Branch'' is used to name streams in Maryland and Virginia. * ''Creek'' is common throughout the United States, as well as Australia. * ''Falls'' is also used to name streams in Maryland, for streams/rivers which have waterfalls on them, even if such falls only have a small vertical drop. Little Gunpowder Falls and the Jones Falls are actually rivers named in this manner, unique to Maryland. * ''Kill'' in New York, Pennsylvania, Delaware, and New Jersey comes from a Dutch language word meaning "riverbed" or "water channel", and can also be used for the UK meaning of 'creek'. * ''Run'' in Ohio, Maryland, Michigan, New Jersey, Pennsylvania, Virginia, or West Virginia can be the name of a stream. * ''Run'' in Florida is the name given to streams coming out of small natural springs. ''River'' is used for streams from larger springs like the Silver River and Rainbow River. * ''Stream'' and ''brook'' are used in Midwestern states, Mid-Atlantic states, and New England.

; Bar: A shoal that develops in a stream as sediment is deposited as the current slows or is impeded by wave action at the confluence. ; Bifurcation: A fork into two or more streams. ; Channel: A depression created by constant erosion that carries the stream's flow. ; Confluence: The point at which the two streams merge. If the two tributaries are of approximately equal size, the confluence may be called a fork. ; Drainage basin: (also known as a ''watershed'' in the United States) The area of land where water flows into a stream. A large drainage basin such as the Amazon River contains many smaller drainage basins. ; Floodplain: Lands adjacent to the stream that are subject to flooding when a stream overflows its banks. ; Gaging station: A site along the route of a stream or river, used for reference marking or water monitoring. ; Headwaters: The part of a stream or river proximate to its source. The word is most commonly used in the plural where there is no single point source. ; Knickpoint: The point on a stream's profile where a sudden change in stream gradient occurs. ; Mouth: The point at which the stream discharges, possibly via an estuary or delta, into a static body of water such as a lake or ocean. ; Pool: A segment where the water is deeper and slower moving. ; Rapids: A turbulent, fast-flowing stretch of a stream or river. ; Riffle: A segment where the flow is shallower and more turbulent. ; River: A large natural stream, which may be a waterway. ; Run: A somewhat smoothly flowing segment of the stream. ; Source: The spring from which the stream originates, or other point of origin of a stream. ; Spring: The point at which a stream emerges from an underground course through unconsolidated sediments or through caves. A stream can, especially with caves, flow aboveground for part of its course, and underground for part of its course. ; Stream bed: The bottom of a stream. ; Stream corridor: Stream, its floodplains, and the transitional upland fringe ; Streamflow: The water moving through a stream channel. ; Thalweg: The river's longitudinal section, or the line joining the deepest point in the channel at each stage from source to mouth. ; Waterfall or cascade: The fall of water where the stream goes over a sudden drop called a knickpoint; some knickpoints are formed by erosion when water flows over an especially resistant stratum, followed by one less so. The stream expends kinetic energy in "trying" to eliminate the knickpoint. ; Wetted perimeter: The line on which the stream's surface meets the channel walls.

Streams typically derive most of their water from precipitation in the form of rain and snow. Most of this water re-enters the atmosphere by evaporation from soil and water bodies, or by the evapotranspiration of plants. Some of the water proceeds to sink into the earth by infiltration and becomes groundwater, much of which eventually enters streams. Some precipitated water is temporarily locked up in snow fields and glaciers, to be released later by evaporation or melting. The rest of the water flows off the land as runoff, the proportion of which varies according to many factors, such as wind, humidity, vegetation, rock types, and relief. This runoff starts as a thin film called sheet wash, combined with a network of tiny rills, together constituting sheet runoff; when this water is concentrated in a channel, a stream has its birth. Some creeks may start from ponds or lakes.

Meanders are looping changes of direction of a stream caused by the erosion and deposition of bank materials. These are typically serpentine in form. Typically, over time the meanders gradually migrate downstream. If some resistant material slows or stops the downstream movement of a meander, a stream may erode through the neck between two legs of a meander to become temporarily straighter, leaving behind an arc-shaped body of water termed an ''oxbow lake'' or ''bayou''. A flood may also cause a meander to be cut through in this way.

Typically, streams are said to have a particular ''profile'', beginning with steep gradients, no flood plain, and little shifting of channels, eventually evolving into streams with low gradients, wide flood plains, and extensive meanders. The initial stage is sometimes termed a "young" or "immature" stream, and the later state a "mature" or "old" stream. However, a stream may meander for some distance before falling into a "young" stream condition.

The stream load is defined as the solid matter carried by a stream. Streams can carry sediment, or alluvium. The amount of load it can carry (capacity) as well as the largest object it can carry (competence) are both dependent on the velocity of the stream.

Generally, streams that flow only during and immediately after precipitation are termed ''ephemeral''. There is no clear demarcation between surface runoff and an ephemeral stream, and some ephemeral streams can be classed as intermittent—flow all but disappearing in the normal course of seasons but ample flow (backups) restoring stream presence such circumstances are documented when stream beds have opened up a path into mines or other underground chambers. According to official US definitions, the channels of intermittent streams are well-defined, as opposed to ephemeral streams, which may or may not have a defined channel, and rely mainly on storm runoff, as their aquatic bed is above the water table. An ephemeral stream does not have the biological, hydrological, and physical characteristics of a continuous or intermittent stream.